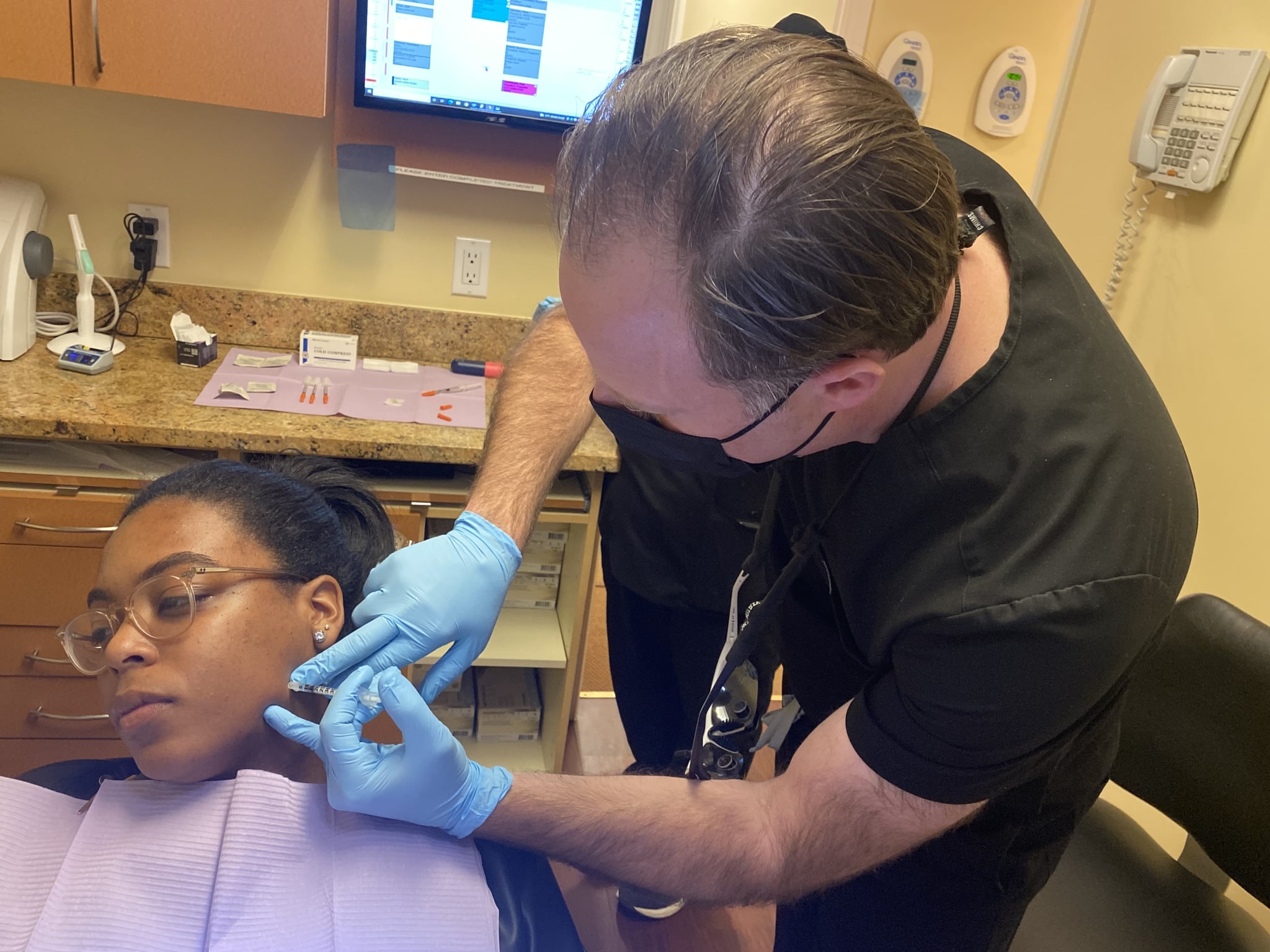 I began clenching my jaw when I got teeth aligners. Since starting my treatment, I’ve noticed I have to unclench my lower jaw when I wake up in the morning, work, or am just going about my normal daily routine. After doing some research, I learned that this issue is called temporomandibular joint dysfunction, or TMD.

While looking up possible treatments for the discomfort I was feeling, I saw that Botox was commonly identified as an option. (It’s worth noting that despite promising studies, this is all done off-label, as the area has not yet been FDA approved.)

“Botox has always been a good treatment for TMD pain, as the way Botox works is that it prevents muscles from contracting,” Keith Arbeitman, DDS, cosmetic dentist and CEO of SymplBrush, tells POPSUGAR. “Oral facial pain is often caused by overactive muscles. By injecting Botox into them, you can limit enough of the muscle fibers from firing that it makes a real difference in how much you can use the muscles to clench and grind your teeth without limiting your ability to chew, swallow, or smile.”

Curious about the treatment, I visited Dr. Arbeitman to get my own round of oral Botox and was shocked by the results. Keep reading to see how it went.

The Process of Getting Oral Botox 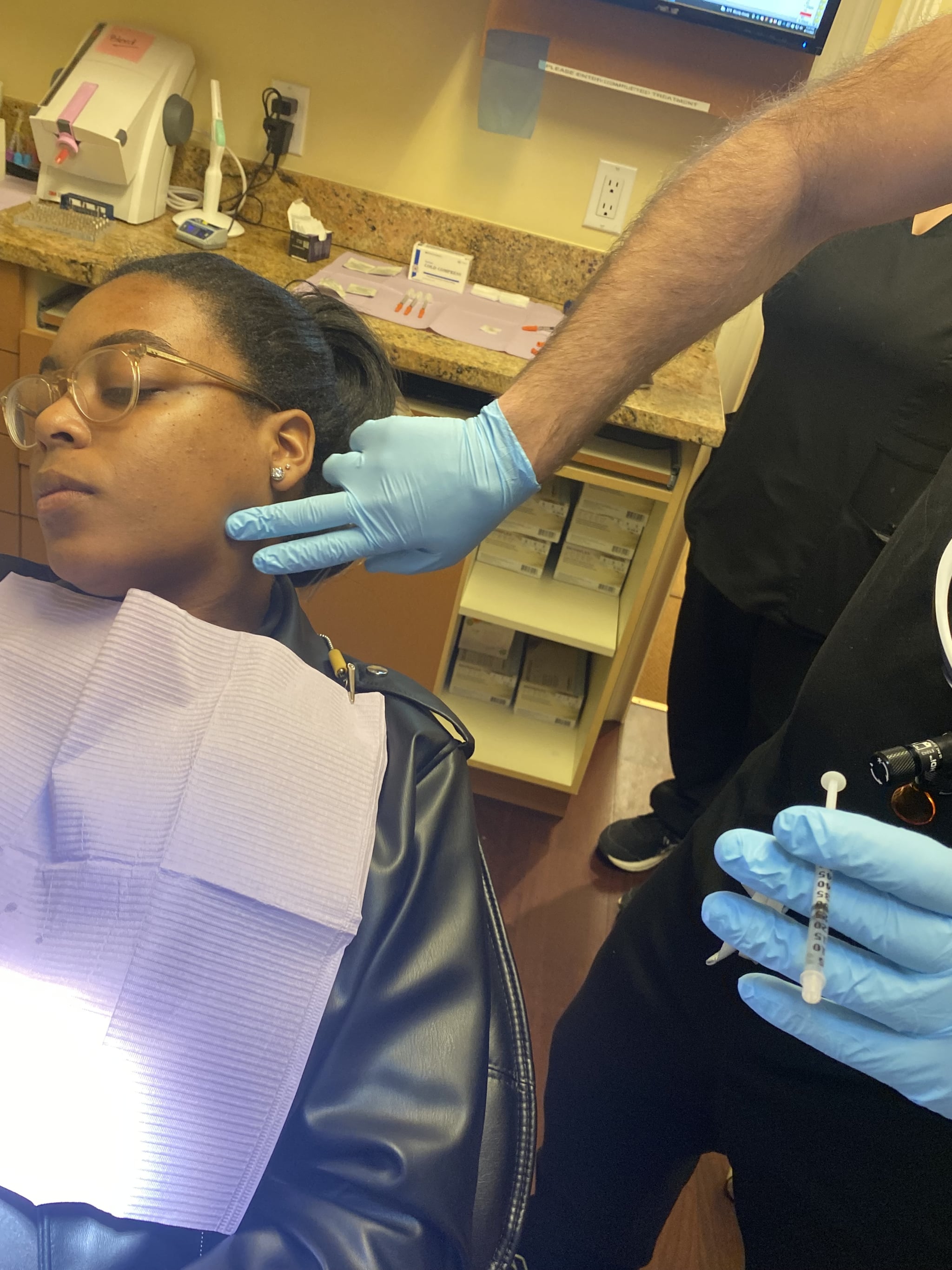 Once I got settled, one of the first things Dr. Arbeitman asked me was where I felt the most discomfort. I explained that I experienced pain toward the back of my lower jaw, and after he got a general understanding of the area, he felt around to assess where most of the tension was being held.

“Once we’ve examined the temporomandibular joint (or TMJ), we determine which muscles are causing the symptoms,” Dr. Arbeitman says. “Then, we typically do a ‘trigger-point injection,’ or an injection into the areas causing the most discomfort.”

For me, he used four trigger-point injections: two on the left, and two on the right. The amount of Botox used was actually very small. “I always err on the side of less is more,” Dr. Arbeitman says. “You don’t want to overdo it on Botox, as you always want to be able to add more that is needed to address discomfort later instead of having to address something going wrong from going overboard.”

With that in mind, Dr. Arbeitman used 40 units of Botox total for the procedure, with 20 on each side of my face (10 for the two trigger-point injections on each jaw).

People always want to know whether the procedure hurt, but it was actually just the opposite. After my first trigger-point injection, I immediately felt relief in my left jaw. I was worried about it being the placebo effect and mentioned it to Dr. Arbeitman. Turns out, many people who suffer from TMD symptoms go through the same thing.

“As a dentist who has treated TMD for 20 years, with Botox, I’ve found longer, more profound improvements to TMD pain in a much shorter time frame,” he says. “While Botox usually takes seven to 14 days to take effect, most people notice an immediate improvement from the injections.”

My appointment was over in about 15 minutes. I was given an ice pack, in case I had any swelling or soreness, but I felt completely normal and didn’t need it. I was bracing for a headache and some bruising — which are common side effects after getting Botox — but the next day, I looked and felt fine.

After Getting Oral Botox

It’s been about one week since I got the treatment, and while my TMJ pain isn’t completely gone, I’ve noticed that I no longer have to unclench my jaw immediately after waking up each morning and that my jaw holds much less tension throughout the day overall.

I haven’t noticed any difficulty with chewing — another possible side effect of oral Botox — or lack of control when smiling. While typical Botox tends to last anywhere from three to four months, the results from injecting a larger muscle like your jaw (partly because practitioners tend to use more units) can last up to six months. If you feel that you need more before then, it’s always recommended to speak with your dentist to determine the best plan of action for your personal needs.

Now that I know this treatment works, I will definitely be going back for more Botox to better manage my TMD symptoms. If you are having any TMD symptoms or are unable to wear a night guard, this may be a viable option for better managing your discomfort.