Schitt’s Creek is the type of show you could watch over and over again and never tire of it. You’ve likely seen it so many times that you’ve memorized the most hilarious lines and moments, which means you’re ready to take on the best Schitt’s Creek scenes to recreate on TikTok. From "where’s David" to "a little bit Alexis," there are so many iconic moments from the show that would make hilarious TikTok videos. No worries if this is your first time doing a TikTok recreation, either, because they’re pretty simple.

The first step is choosing which scene you’d like to recreate. Some TikTokers have already tackled these seven iconic Schitt’s Creek scenes, so the sounds are ready for you to use as well. All you need to bring to the table are costumes and your own creativity. Throw on a fashionable sweater if you’re channeling David, something boho-chic for Alexis, and a funky wig for Moira. When you’re all dressed and ready to take on the spotlight, make sure you have the lines nailed down for lip syncing. This part shouldn’t be hard since you already have these fan-favorite moments memorized.

Then, it’s time to record. Recruit your housemates to join in on the fun if there are multiple roles, or play every part like the true star you are. Once you’re pleased with your content, post it with a fun Schitt’s Creek quote as your caption that’s worthy of a "Yay, David" and round of applause from your friends. 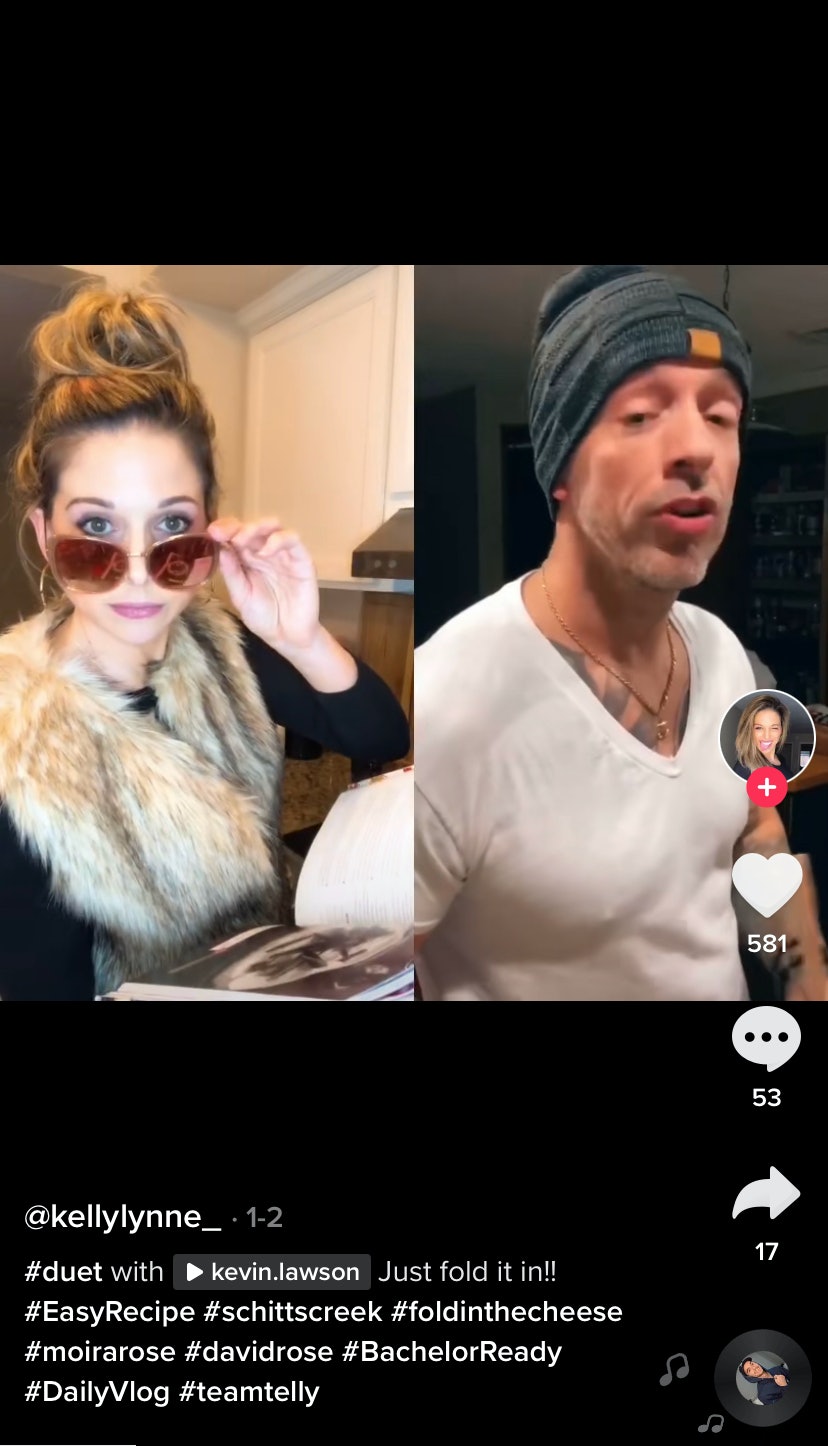 This "fold in the cheese" moment between David and Moira is so popular that there are even spoons ($25) and dish towels ($27) that quote the scene on Etsy. Record this recreation in your kitchen while you’re cooking dinner.

Get your partner or housemate to play the part of Moira as you get frustrated with their terrible directions. You could even do a duet video channeling David and invite anyone on TikTok to take on the Moria role just like this TikToker did.

The "you shaved" scene between Alexis and Mutt is hilarious and fun for couples who like to TikTok together. Try it the next time your partner shaves their beard. Be sure to use the baby filter from Snapchat on your own partner like this TikToker did on theirs to play up the joke of how different they look.

The "mom likes you more" scene when Alexis tells David that Moira likes him more is perfect for you and your siblings to recreate. Or, take on all three roles like this TikToker did. Differentiate between the different Roses by wearing outfits that match their style.

4. The "A Little Bit Alexis" Scene 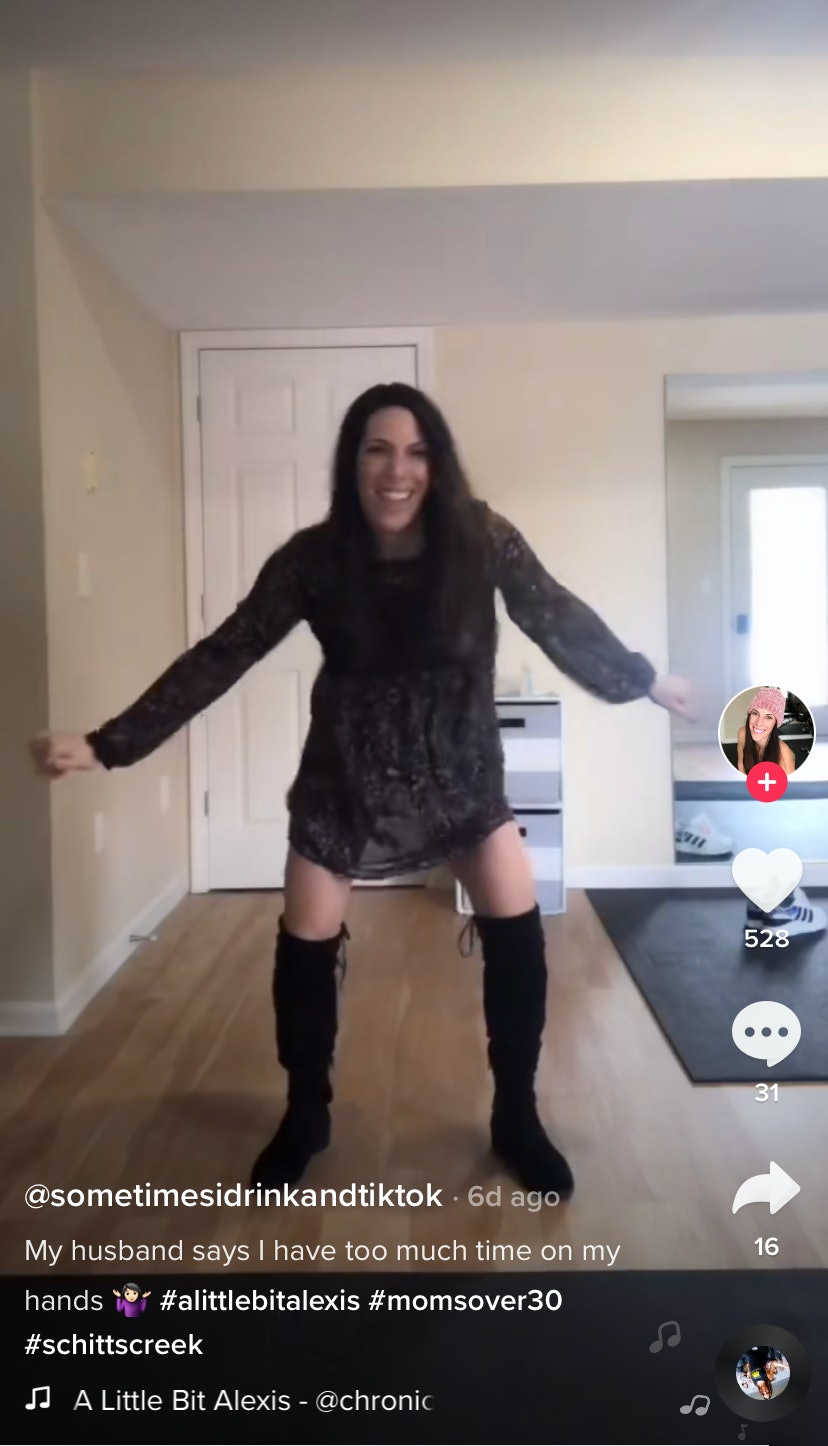 The "a little bit Alexis" scene is your time to really shine. Show off some of that TikTok choreography you’ve picked up while scrolling through the app. To take your video to the next level, wear a velvet dress similar to the one Annie Murphy wears in this scene.

A super cute moment to recreate with the David to your Patrick is the "grab you a slider" scene. Or, you could simply play the part of David asking for some food while dramatically hugging a pillow or wrapped up in a blanket. Add text to your vid for all the LOLs, like, "This is how I’d react if my fave show got canceled," or, "When the Sunday scaries are too real."

Have some fun with David and Johnny’s "tax write-off" scene. Channel David while dressed in your most expensive ‘fit as you nonchalantly try to write off everything.

Get your entire family involved or flex your acting skills by playing all the roles in the "where’s David" scene. If you’re doing all the parts, be sure to wear character costumes. Then, record the video in your backyard to really mimic the moment when the Rose family finds David chillin’ in a field.