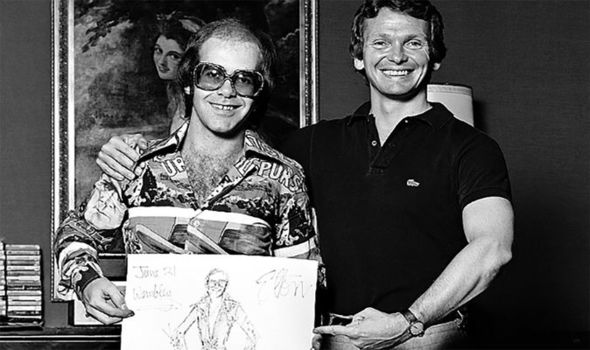 With a passion for glitz and glamour, the fashion legend has designed finery for a cavalcade of divas, from Judy Garland and Liza Minnelli to Diana Ross, Jennifer Lopez, Lucille Ball, Debbie Reynolds, Madonna and Barbra Streisand.

“I want the audience to gasp and applaud when a star steps out in one of my designs, before they’ve said a word or sung a note,” says Mackie, 82, speaking to the Daily Express from his home in Palm Springs, California.

“Whether on stage or a red carpet, it’s important that a dress be interesting.”

Mackie got his break at Paramount Pictures with legendary Hollywood costumier Edith Head, and created the sketch for Marilyn Monroe’s famed nearly-nude rhinestone-jewelled gown that she wore when singing “Happy birthday, Mr President” to John F Kennedy in 1962.

Working with Cher on her first TV series in 1971, its budget was so paltry that he could create only one white gown, but promised that if the show had a second season, “there will be millions of beads”.

Half a century later, Cher says: “True to his word, there have been gazillions of them, sometimes with just a tiny bit of fabric”.

A three-time Oscar nominee, Mackie won a Tony award in 2019 for his costumes in hit Broadway musical The Cher Show.

“He has such a timeless fashion sense that the best of today’s designers are copying his looks for every top female artist,” says Cher.

Mackie laughs: “I’ve worked with many divas, and seen some diva-like behaviour. Usually they’re just nervous, and want to get it right. But the best know exactly what they want, and expect to get it. The troublesome ones don’t last long with me.

“Cher is absolutely fearless. In 1986 she was a little annoyed that she wasn’t Oscar-nominated for her film Mask, and wanted to make an impression when asked to present an Academy Award. I designed a gown revealing lots of flesh, with a feathered headdress, but warned her it would distract attention from the Oscar winner. She said, ‘Oh, it’s only the best supporting actor’.

“Elton John isn’t afraid to have fun, and loves to be in costume. I’ve dressed him in a sequinned baseball uniform, and as Minnie Mouse for a whole concert, even as Donald Duck. He was laughing through that show because he could barely reach the piano – his tail stuck out, and he wore rubber flippers on his feet which made it hard to hit the pedals.”

Elton approached Mackie for designs after appearing on Cher’s TV show, saying: “Do what you do for Cher.”

Mackie recalls: “So I treated him like a showgirl, creating this skin-tight sequinned jumpsuit with a cape that stretched from one side of the stage to the other. I’d show him 10 sketches to see what he liked, and he’d order all 10. If I’d shown him 40, he would have ordered all 40.

“I made him a red devil costume with sequin feather wings and was flattered when the costume designers for his film Rocketman asked if they could use that as inspiration for the costume Elton wears going into rehab in the movie.

“Tina Turner is amazing, high-energy. When we first met she was hiding from ex- husband Ike Turner, moving from hotel to hotel. She loves to show off those amazing legs, and will pop a couple of painkillers, shoehorn herself into her Louboutins, and go out there in high heels, looking her best for the audience.”

“Diana Ross is brilliantly talented, but she was difficult sometimes,” adds Mackie, who dressed the Motown star for stage shows and the 1972 movie Lady Sings The Blues.

“I think she really wanted to design her own clothes. She’d hoped to be a fashion designer. She had her own opinions on how she should be dressed. Sometimes I’d say, ‘Oh – are you sure you want to wear that?’

“Goldie Hawn’s zany image was an act; she was the smartest girl, a great dancer and singer, and fun to dress. I first saw her in a chorus line of 12 girls, but your eyes only went to Goldie.You knew she’d be a star.”

Monroe’s famed “nude” gown, worn for JFK’s 45th birthday, though designed by Jean Louis, was brought vividly to life by Mackie’s sketch for the costumier. “She asked for something that would make everybody think she was nude, but her body appeared to be covered with diamonds when she took her fur coat off,” says Mackie. “The dress was so tight, she had to be sewn into it.”

Mackie designed for TV’s The Judy Garland Show in 1963, and recalls: “Judy was 4ft 11in with a very odd figure: long legs for a woman of her height, but short-waisted, yet with a bust. I’d put her in short jackets to accentuate her legs.

“Liza Minnelli was 17 when she came on Garland’s show, and already a Broadway star, with amazing energy. I dressed her through the years, and designed the white gown for her fourth wedding to David Gest in 2002. She looked lovely, but I didn’t give that marriage much hope, and it didn’t last.”

For the 1968 TV special The Fred Astaire Show, Mackie dressed the dance legend in Swinging Sixties fashions. “He was almost 70, but I put him in bell bottom trousers, turtlenecks and a Nehru jacket. He looked great in everything. He taught me a lot about men’s clothes: what looks good, and what accentuates a dancer’s ‘line’.

“Madonna said, ‘I need something to wear at the Academy Awards’ in 1991, and I made her a white sequinned gown to sing her song from Dick Tracy. She wore it to all the parties with her date, Michael Jackson.

“Whoopi Goldberg presented the Oscars in 1999, when Shakespeare In Love and Elizabeth were both best picture nominees, and she wanted to make a big entrance. I made her an Elizabethan costume on a sprung steel cage with her costume on top.

“The audience didn’t know that she wore her evening gown underneath, and had to do a quick change, whip off her wig and white face-paint and redo her make-up before continuing with the show.”

What is happening where you live? Find out by adding your postcode or visit InYourArea

Other stars dressed by Mackie include Mitzi Gaynor – “one of the first big stars to trust me with her costumes. She was adorable, so talented” – and Ann-Margret, who “with a lovely body and beautiful legs, always appeared like this sex kitten with a whip, but she was actually very shy, and didn’t want to show too much. I had to accentuate her curves without being too revealing”.

“Pink is amazing, performing while swinging from a trapeze, or hanging from aerial silks above stadiums, which is terrifying,” he smiles. “A small wardrobe malfunction could be disastrous when you’re up in the air. Luckily, today we have these amazing stretch fabrics that we didn’t have years ago. These are all big-personality people. They’re not just up there dressed up. It’s all about making them look good and entertaining.”