In a new Instagram post, Britney Spears acknowledged her ex, Justin Timberlake’s music video for ‘Cry Me A River,’ which was inspired by their breakup. She even dressed just like her character in the video for the new clip!

Justin Timberlake’s 2002 video for “Cry Me A River” features a Britney Spears look-alike whose face is mostly covered by a grey hat in the footage, and Britney herself rocked the exact look in a new Instagram video on Oct. 13. Brit posted one of her signature videos where she shows off her outfit with a number of different accessories. One of those props is a grey hat, just like in the “Cry Me A River” video. Britney even acknowledged the similarity in her caption for the post.

“Something looks familiar….the hat,” she wrote. “Wait, I look like that girl in the Justin Timberlake video with that hat in “Cry Me A River”!!! Oh s*** that’s ME!!! I’m Britney Spears??? I guess I forget that sometimes.” Justin famously wrote “Cry Me A River” after his split from Britney in 2002. The lyrics in the song allege that Britney cheated, and Justin didn’t shy away from hinting that it was about the singer when he casted her look-alike in the video. Britney and Justin were together for nearly three years before their breakup.

In his 2018 book, Hindsight: And All The Things I Can’t See In Front Of Me, Justin admitted two writing “Cry Me A River” just two hours after he and Britney broke up. “I’ve been scorned, I’ve been pissed off,” he admitted. “The feelings I had were so strong I had to write it. I translated my feelings into a form where people could listen and hopefully relate to it. People heard me and they understood it because we’ve all been there.” 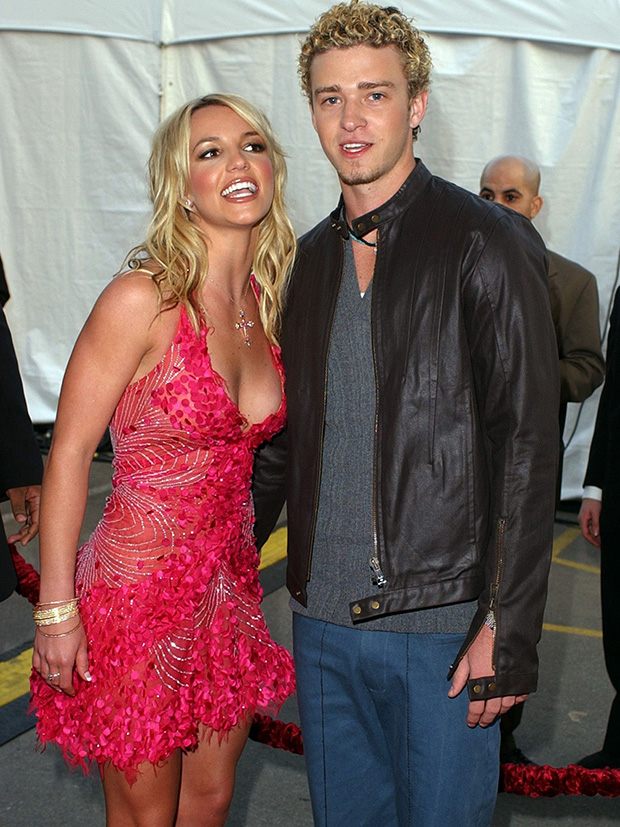 Now that the split is nearly 20 years in the past, though, Britney and Justin appear to be on amicable terms. Even if they don’t have an actual personal relationship, Justin has publicly supported Britney as she’s fought to end her conservatorship, which began in 2008. “We should all be supporting Britney at this time,” Justin tweeted in June. “Regardless of our past, good and bad, and no matter how long ago it was…what’s happening to her is just not right. No woman should ever be restricted from making decisions about her own body. No one should EVER be held against their will..or ever have to ask permission to access everything they’ve worked so hard for. [My wife] Jess [Biel] and I send our love, and our absolute support to Britney during this time. We hope the courts, and her family, make this right and let her live however she wants to live.”

In Feb. 2021, Justin also publicly apologized for contributing to the misogynistic nature of the entertainment industry, specifically calling out his treatment of Britney, as well as Janet Jackson, in the past. “I care for and respect these women and I know I failed,” he wrote at the time. Meanwhile, Britney seems to be cool with Justin, too, as she’s used his songs and lyrics in some of her Instagram videos over the past few years.