Dan Walker, 44, issued an apology on air this morning on BBC Breakfast after baffling viewers when he referred to his co-host Louise Minchin, 52, as “Louise Walker”.

During the awkward blunder, Dan, who is married to wife Sarah Walker, said: “Good morning, welcome to Breakfast with Louise Walker… Louise Walker?

Louise, who is also married, to husband David Minchin, burst into fits of giggles at Dan’s mishap and was joined by members of the production team in the studio.

She chuckled: “I just don’t know what to say!

“Except for these are the headlines at 8 o’clock,” Louise quipped, moving on swiftly with the show.

Fans rushed to Twitter to comment on Dan’s blunder, with one jokingly writing: “@mrdanwalker Dan reveals secretly wedding @louiseminchin with a slip of the tongue. Viewers in shock.”

Dan spotted the tweet from the viewer and replied in view of his 711,000 followers that both his wife and Louise’s husband might have an issue with that idea.

He quipped: “I think Louise’s husband and my wife would have something to say about that. #LouiseWalker #BBCBreakfast,” alongside a crying with laughter and flushed face emoji.

Dan then took to Twitter again to clarify the situation after his unfortunate error.

Sharing several snaps of him and his BBC co-host Louise, he told fans: “Just to confirm…

“I do love working with @louiseminchin but we are not married… despite what I said on #BBCBreakfast this morning #MrAndMrsWalker.”

Louise couldn’t resist poking fun at her colleague for his blunder once again, as she retweeted his post in view of her 207,000 followers alongside several laughing emojis. 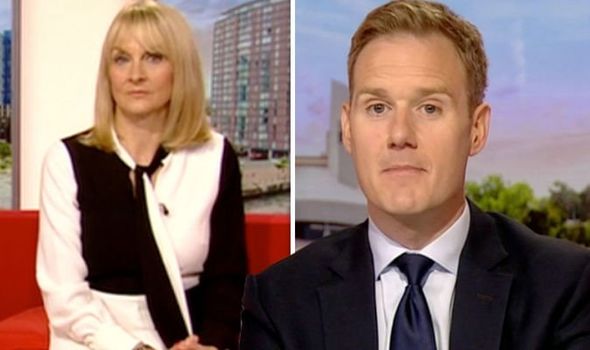