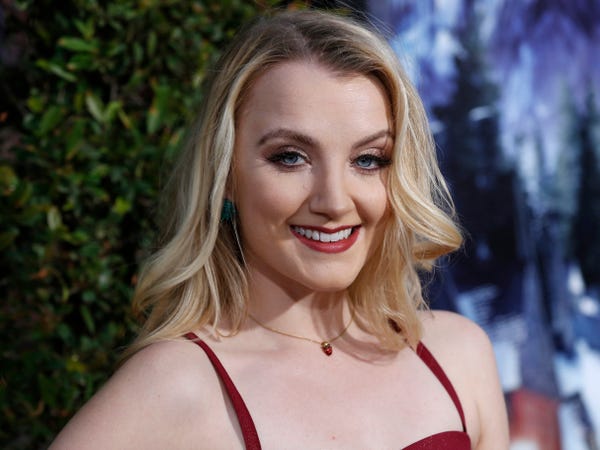 "Harry Potter" star Evanna Lynch told Insider that her character in the fantasy saga, Luna Lovegood, seems to mean a great deal to a lot of autistic Potter fans.

Lynch was speaking to Insider about her ongoing campaign against John Hopkins University and their experiments on owls, and shared some insight into fans reaction to the quirky and mystical Luna Lovegood.

"I always get a lot of letters from people with autism who relate to Luna a lot," Lynch said. "Obviously, I don't fully understand the condition, but, I understand this feeling of you just can't communicate with those around you and it gets misunderstood, and you just want people to see your heart, to see how you feel, but it's hard to communicate that."

Lynch said that she loves that "Harry Potter" is filled with "outsiders" like Luna and Neville Longbottom, who she says "weren't the most exciting people in the room or so smooth or charming," but that they simply had "an inner loveliness and compassion."

"They get overlooked because they can't communicate in the way that this introverted kind of society likes," Lynch said, explaining that she, too, felt this way when she was growing up.

"I always felt so out of place. And I just couldn't put my finger on it. Why do I feel different to other people? Why do they have an easier time just fitting in? How do they know how to be funny, how to be cool? I felt that way but felt bad about it," Lynch said.

However, playing Luna changed the way she thought about herself, and the young witch became something of an inspiration to her, even as the actress playing the character.

"Luna comes along and she is that way to society [a perceived outsider], but she doesn't feel bad about it. She just completely accepts herself. I think it's similar fo autistic people. Obviously, everyone's very different and every case of autism is different, but I think that they see that Luna is somebody who doesn't quite fit in."

In the movies, Luna is referred to as "Loony Lovegood," and is mocked for what her fellow students perceive as strange interests — death, thestrals, and Wrackspurts, to name a few.

She becomes a part of Harry's friendship by remaining herself, however. She doesn't try to fit in or change herself, she just remains her kooky, kind self. This is a powerful message for all of those, like Luna and Lynch herself, who have felt like an "outsider" in society.

"She's just a little bit off-center and more of a misfit, yet she manages to accept herself despite being ostracized for being 'weird.' That to me was so inspiring growing up. I feel that might be what fans with autism are connecting with as well."

Celebrities
We will use your email address only for sending you newsletters. Please see our Privacy Notice for details of your...
Lifestyle
Fox News Flash top headlines for October 27 Fox News Flash top headlines are here. Check out what's clicking on...
TV & Movies
NBC has set a celeb-studded Law & Order special: The Paley Center Presents Law & Order: Before They Were Stars will...
World News
Boeing Co unveiled a fourth straight quarterly loss and deeper job cuts on Wednesday as the coronavirus pandemic and the...
Beauty
Facials are magic when it comes to transforming meh-feeling skin into glowing, blissful radiance in less than an hour. Even...
Fashion
Bailmain‘s footwear offerings range from sleek to hefty but the luxury house has made little inroads on a sneaker that...
Recent Posts
We and our partners use cookies on this site to improve our service, perform analytics, personalize advertising, measure advertising performance, and remember website preferences.Ok