I’m A Celebrity 2022: Chris Moyles is the SIXTH star to be voted out the jungle camp as says he’s ‘gutted’ Matt Hancock is more popular than him

Chris Moyles was the sixth campmate to be voted of this year’s series of I’m A Celebrity… Get Me Out of Here! during Thursday night’s episode.

The radio DJ was named in the bottom two of the public vote by show hosts Ant McPartlin and Declan Donnelly with comedian Seann Walsh.

I just said this morning in the Bush Telegraph, “I’ve got this now, I’d really like to stay,” before adding: ‘I’m gutted Matt Hancock is more popular than me!’ 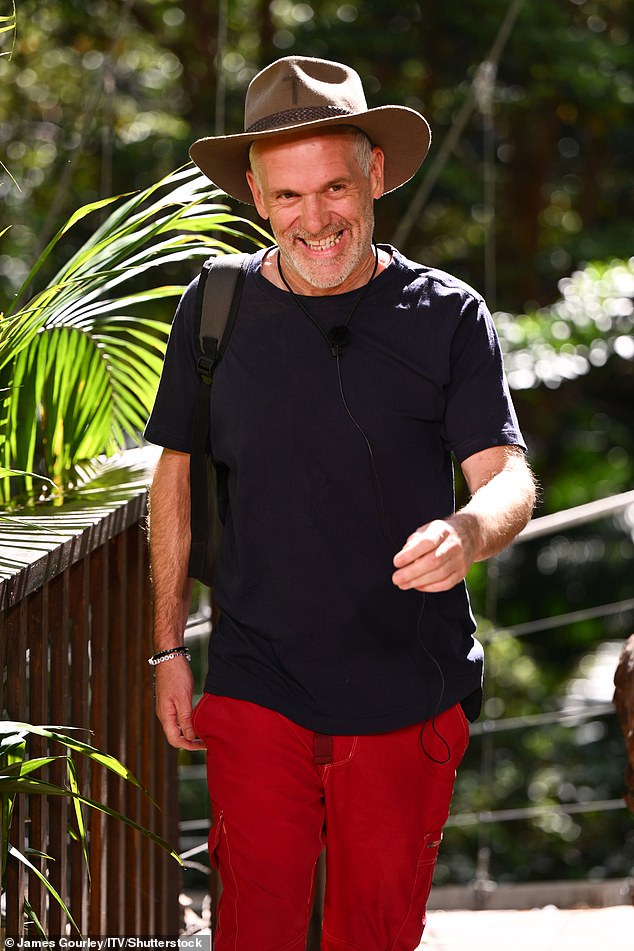 Farewell: Chris Moyles was the sixth campmate to be voted of this year’s series of I’m A Celebrity… Get Me Out of Here! during Thursday night’s episode

Former Health Secretary Matt made the controversial decision to appear on the jungle survival series this year.

Speaking about the West Suffolk MP, Chris said: ‘I really struggled with it to be fair, I slagged him a bit. I separated Matt Hancock from Matt.

‘We had to live with him and he was winning the stars and getting us food. 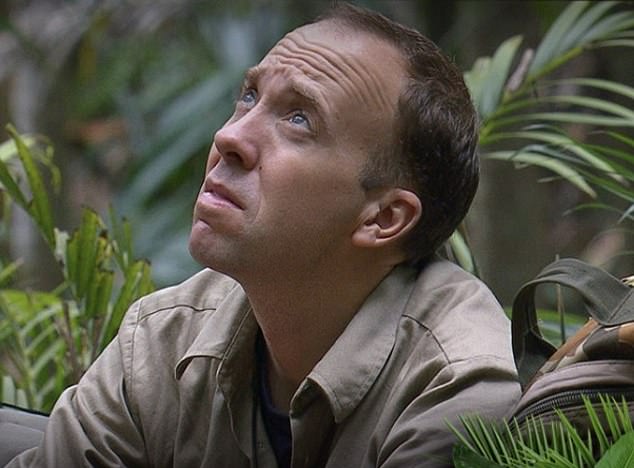 Shocked: Chris was surprised he was voted off the show before former Health Secretary Matt Hancock, with the broadcaster saying ‘I’m gutted Matt Hancock is more popular than me!’

Chris said he felt like a ‘competition winner’ going into camp, adding: ‘I never got over the surrealness of it all. I’d often be the last one go to bed and I’d go to the dunny and I’d look back and I’d go, “Wow!'”‘

He added: ‘It’s such a privilege to be able to do it… To be a part of this is a real honour. I know I won’t appreciate it until I’m out.’ 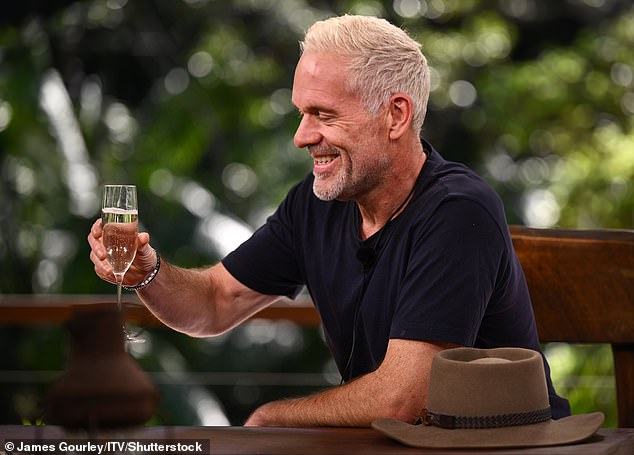 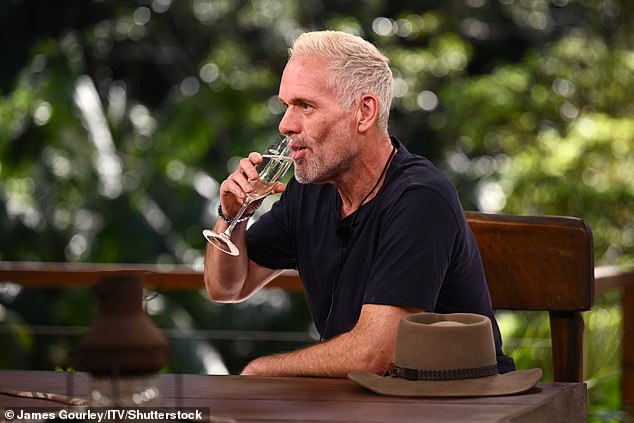 The broadcaster struggled to successfully compete in the trials, at one point only managing to win one star for camp, meaning the group had one meal to share between them at a point when there was 11 people residing in camp.

He explained: ‘I’m an anxious scared man who is really comfortable in a radio studio. I’m not cut out for this life.’

Chris burst into tears as his girlfriend Tiffany Austin ran to greet him after he crossed the bridge out of camp as flares were set off and confetti was fired into the air. 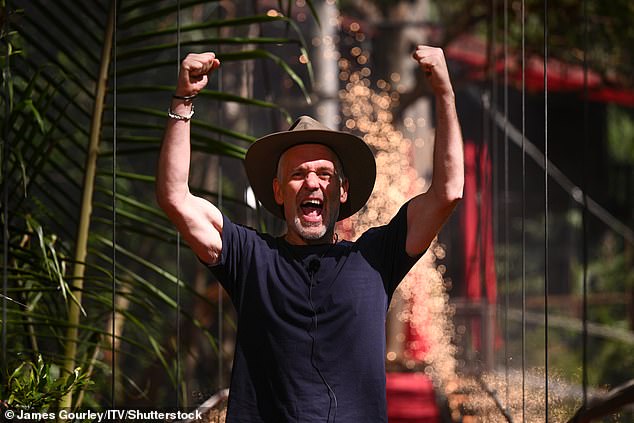 Chris’s departure prompted a mixed reaction from the viewing public, with some taking to Twitter to say they were sorry to see him go, while others thought it was the right time.

Offering their congratulations to the star, one viewer tweeted: ‘Hugggge well done Chris! Gutted you’re out but love ya loads!!’

Another fan posted: ‘@ChrisMoyles you smashed it mate wish you had done [final trial] Cyclone we have loved watching you all the way #TeamMoyles baby.’ 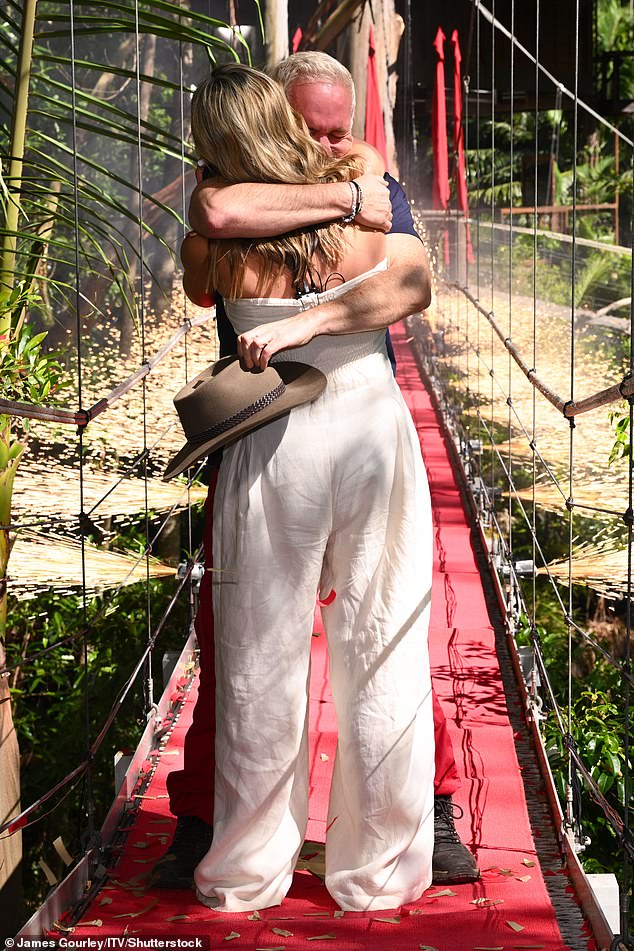 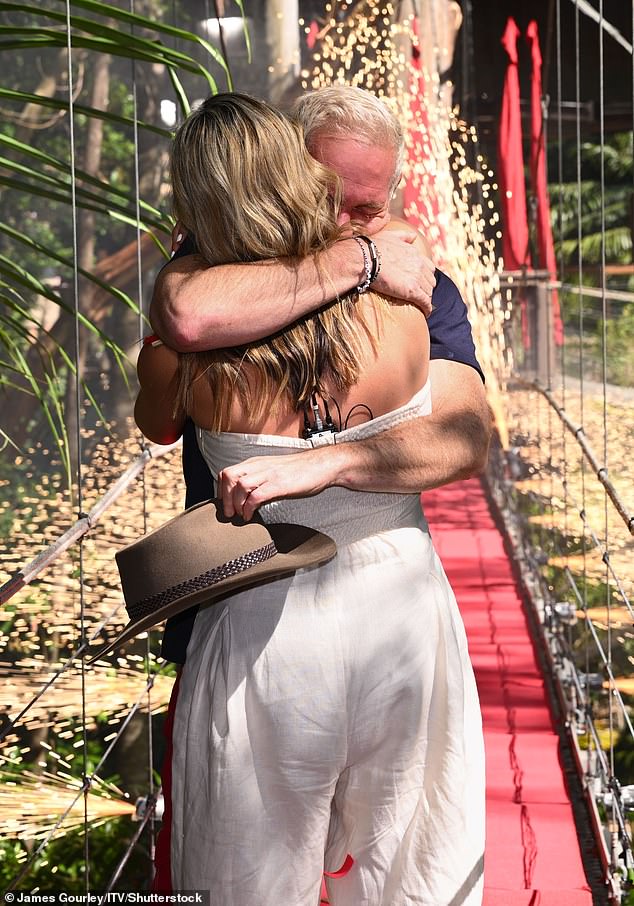 ‘Sad to see Chris Moyles go, was in my top 3,’ wrote another home audience member.

While someone else shared: ‘Sooooo sad to see @ChrisMoyles leave the jungle. He was my winner all the way #teamMoyles #ImACelebrity.’

‘Great job Chris, sad you’re out, but great to see you so happy!,’ posted another viewer.

Pleased that Chris has voiced his opinion on Matt, one viewer wrote: ‘Fair play to you Chris Moyles for speaking out tonight about @matthancock what a joke!’

Looking forward to him returning to his Radio X show, someone else wrote: ‘Chris Moyles is brilliant. I am glad he is still reminding everyone about the ridiculousness of Matt Hancock in the jungle. Can’t wait to hear him on air again.’

However, an unimpressed viewer tweeted: ‘He had to go as he is the most boring person I have ever seen on TV!’

While someone else wrote: ‘It was a wake-up call for Chris Moyles. He was absolutely rubbish in the jungle. He may not like Matt Hancock, but “Matt” was so much better than him. In fact, all the others were better than him.’

While someone else shared: ‘Brilliant, was definitely his time to go. He did nothing but moan and whine with Boy George and Sue.’

‘Chris Moyles has left the jungle. You really ain’t as funny as you like to think you are,’ wrote another viewer.

I’m A Celebrity… Get Me Out of Here! continues on Friday at 9.15pm on ITV1 and ITVX.

I’m A Celebrity 2022: All you need to know about this year’s show

MISSING ANY BIG OCCASIONS? No, I am going straight into the jungle from playing at various festivals and gigs

ROLE IN THE CAMP: In-house dietician reassuring everyone that they will be ok on the jungle diet. And entertainer – I will sing!

BEST ATTRIBUTE: I am a very positive person and I don’t bear any grudges

DREAM CAMPMATE: It would be funny if my ex, Jon Moss, comes on the programme -but I don’t think that will happen!

PHOBIAS: I am petrified of heights. I ended up carrying the bags when we took my girlfriend’s niece once to Go Ape as I am so petrified!

MISSING ANY BIG OCCASIONS? A friend’s birthday, a wedding, and Leeds United matches

ROLE IN THE CAMP: Entertainer. Hopefully I can help shorten everyone’s boredom.

BEST ATTRIBUTE: Hiding food! I am going to fly out early and sneak into the jungle and hide pot noodles everywhere, then I will be everyone’s best friend!

DREAM CAMPMATE: Ant and Dec…let’s see how they cope for 24 hours!

PHOBIAS: Don’t be ridiculous! I am not going to admit to what I fear most!

MISSING ANY BIG OCCASIONS? Coronation Street and we are expecting another grandchild any day, so hopefully it will arrive before I fly out to Australia.

ROLE IN THE CAMP: I will be more of a mum – that is where I will naturally fit.

BEST ATTRIBUTE: I can cook and I am a good listener, so hopefully I will be a friendly ear for everyone.

DREAM CAMPMATE: Good Morning Britain’s Richard Arnold. He is my TV husband and it would be lovely to have an ally in camp!

CLAIM TO FAME: Presenter of A Place In The Sun

PHOBIAS: Spiders. There is no point in lying about it! I’ve got an irrational fear about them

MISSING ANY BIG OCCASIONS? Just a holiday which I can postpone

ROLE IN THE CAMP: Mum, cook and morale booster. I always like to look at the positive side in life

BEST ATTRIBUTE: I can cook and I will be good at making sure everything is tidy in camp

DREAM CAMPMATE: Mo Gilligan. He is hilarious and I totally fancy him!

PHOBIAS: I am scared of absolutely everything. Snakes, rats – I am fearful of them all and I am dreading the trials

MISSING ANY BIG OCCASIONS? I was going on tour but we’ve postponed it now until next year

ROLE IN THE CAMP: Tension breaker. If I can break tension anywhere it starts up in the camp, then I will do that. We don’t need to be bickering as it will be a first-time experience for everyone

BEST ATTRIBUTE: Hopefully I will bring some humour to the camp

DREAM CAMPMATE: I am a big Arsenal fan and so any ex-Arsenal player would be great. I am looking forward to chatting to Ant & Dec about football

PHOBIAS: I am not too pleased about rats being in there but I am just trying to pretend it is not happening!

MISSING ANY BIG OCCASIONS? No, I am really looking forward to taking part in this show

BIGGEST MISCONCEPTION YOU WANT TO DISPEL IN THE JUNGLE: People have voiced their feelings about me and I am hoping they will see I am very different. I want to create new memories

ROLE IN THE CAMP: I am a great listener. I can’t cook but if someone would like to teach me, then I will give it a go

BEST ATTRIBUTE: I don’t want to put myself down but if my friends were to answer this question, they would say there isn’t much Seann can do! I am not really bringing too much to the table which is why I am a good listener!

DREAM CAMPER: Lee Evans, anyone from Blink-182 or Boy George. My mum took me to see him at Wembley and he wore a satellite dish as a hat!

PHOBIAS: I haven’t admitted to having any phobias but in a weird way, I am looking forward to taking part in the trials!

MISSING ANY BIG OCCASIONS? My podcast series and the rugby Internationals this autumn

ROLE IN THE CAMP: Morning motivator. I would like to see everyone get on well and us all have a great experience

BEST ATTRIBUTE: I am a positive person

DREAM CAMPMATE: Samuel L Jackson would be cool. He has lived the life!

MISSING ANY BIG OCCASIONS? I am a big fan of football so I will miss watching the start of the World Cup

ROLE IN THE CAMP: Entertainer and games coordinator

BEST ATTRIBUTE: It is definitely not my cooking skills or brains!

DREAM CAMPMATE: Any of the Leicester City starting 11!

PHOBIAS: I am not sure what my fear factor will be because I’ve never had rodents, spiders and snakes crawling all over me!

MISSING ANY BIG OCCASIONS? My children’s annual school ball which I am gutted about

ROLE IN THE CAMP: Mum and cook. I don’t mind falling into that position

BEST ATTRIBUTE: I like to listen and talk. I love learning about people and I have a natural curiosity for people

PHOBIAS: I don’t like rats and the thought of being underground fills me with fear!

MISSING ANY BIG OCCASIONS? The Men’s World Cup. I am going to find it weird not being able to know how the men are getting on in the tournament. Hopefully they will still be in the tournament when I come out of the jungle

ROLE IN THE CAMP: Helping hand. I like to help people if they aren’t having a good day

BEST ATTRIBUTE: Hard worker. I will always find a way to add value. I am also very honest

DREAM CAMPMATE: Another sports person would be great as it would be someone to bounce ideas off.

PHOBIAS: I hate the dark so I’m keen to avoid any challenges in the darkness

MISSING ANY BIG OCCASIONS? No, had the show been on air any later, I could have missed my sister’s wedding

ROLE IN THE CAMP: Clown. I was always the class clown at school and I love having a laugh

BEST ATTRIBUTE: I don’t take myself seriously and I have got a good sense of humour

DREAM CAMPMATE: A pop legend like Dolly Parton who has amazing stories to tell

PHOBIAS: Snakes. I don’t thankfully suffer from claustrophobia –or I think I don’t!

BIGGEST MISCONCEPTION YOU WANT TO DISPEL IN THE JUNGLE: Politicians are people too and it will be nice for people to see me as me. We are human too

ROLE IN THE CAMP: I like to muck in, and I think I will be collecting a lot of firewood. I like cooking too