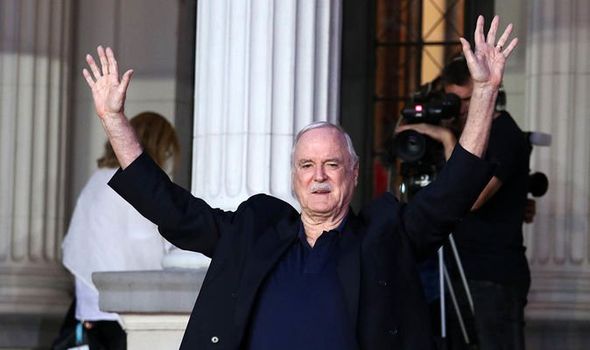 In fairness, aged 80 and one of the world’s most famous performers, as well as being one of four surviving members of the legendary Monty Python team, Cleese has spent more than his share of time kicking around on film sets between takes. Reminded of the infamously arduous 1975 Python classic The Holy Grail, filmed on location in the wilds of Scotland when he was a mere 35-year-old, he laughs: “We were young, we deserved to suffer. I think we made that film for about £200,000 – that’s not a lot. When the first assistant director shouted ‘Wrap’ there was a rush to the of cars to get back to the hotel because there was only enough hot water for about 60 percent of us.”

Fortunately, things have improved comfort-wise since then, but being back at school, to pick up his analogy, brings us to the heart of his latest project.

Cleese arrived at Cambridge University in the early Sixties to study physics after a typically English schooling to discover something that shocked him – the ability to make people laugh.

How he became the man who asked, “What have the Romans ever done for us?”, hilariously embodied the Ministry of Silly Walks and created hotelier from hell Basil Fawlty is chronicled in a new book.

Creativity is a short, thought provoking guide to what makes humans inventive and imaginative, where and how we find inspiration, and perhaps most importantly why it matters.

“It turned out I had some creative talent but you’d never have found any of my teachers who’d have noticed,” he says.

“Having got into Cambridge on science, I had discovered I could take a blank sheet of paper and write things that would make people laugh.”

Cleese began coming up with sketches for the university’s famous Footlights drama society with, among others, his future Python collaborator Graham Chapman.

The latter brought a sense of the surreal – it was “Gray” who suggested the Python’s famous dead parrot should be a “Norwegian Blue” – making him the perfect foil for Cleese. 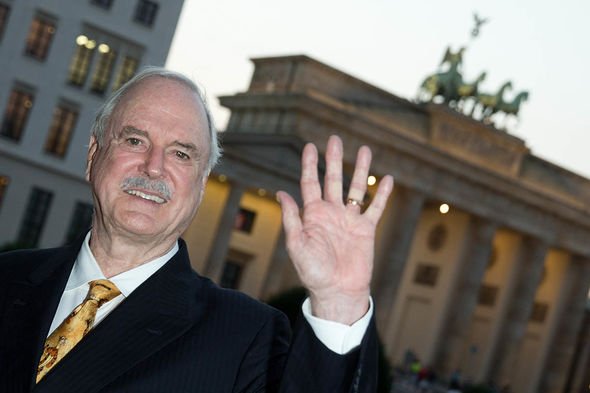 “My fault in those days was almost to be too logical. Graham would sit there puffing on his pipe. Half the time he let his mind wander,” says Cleese.

“As a result he we would come up with these wild ideas that made what we were doing much more interesting.”

When writer’s block hit, Cleese was fascinated by there was the way his unconscious mind would tackle the problem.

“I’d get stuck on a punchline and sit there and not be able to solve it. In the morning, I’d get up, make myself a cup of coffee and sit down and within 90 seconds I’d have solved it,” he says.

“This happened several times and I thought it can only be because my mind is working on it while I’m asleep.” 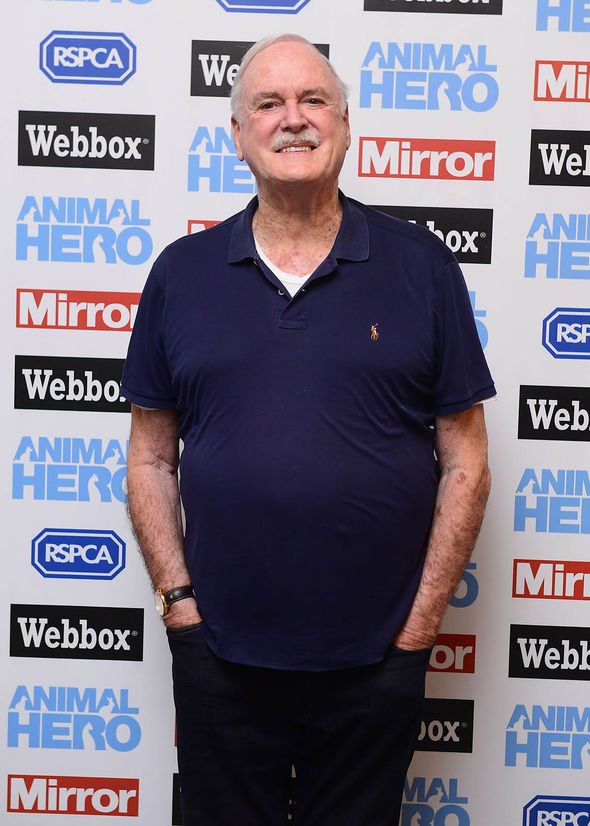 Chapman died just 48 in 1989 having suffered from severe alcoholism that had badly affected his ability to perform.

“He was delusional to some extent, and had some very strange ideas, but he was an ideal writing partner and the strange and happy thing is I’ve found a very similar combination with my daughter, Camilla, who’s now 36 and a stand-up comedian,” says Cleese, who has homes in London and the Caribbean island of Nevis.

“She comes in with these good ideas and several times I’ve thought, ‘Oh, I don’t think much of that,’ and a couple of days later I realise it’s pure gold.”

The sense of play we lose as we progress through formal education and get older is fundamental to such creativity.

Cleese stays fresh, he says, thanks to jewellery designer and former model Jennifer Wade, 48, who became his fourth wife in 2012.

“I’m married to the most wonderfully playful woman,” he laughs. “We spend all our time hiding in cupboards and trying to scare each other. I remember not long ago, I got back to the flat and I looked around and called and no sign.

“I thought, maybe she’s in the bathroom, and as I went into the bedroom to get there I was squeezing between the bed and the wall and this hand shot out from under the bed and grabbed me by the ankle. 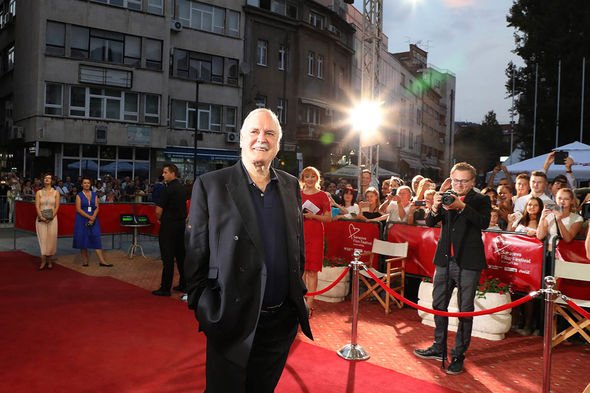 “It’s what I do on film sets, because there’s so much hanging around, I’m always fooling with people to keep us all amused.”

Cleese’s big creative break came in the autumn of 1965 when he was in New York at something of a loose end and took a call from TV host David Frost.

“He rang me up and I can still remember him saying, ‘Would you like to be in a show for the BBC with me? There’s these two people you won’t know called Ronnie Barker and Ronnie Corbett’,” says Cleese.

“He plucked me from complete obscurity and put me into a peak-hour show. If David hadn’t done that, it would probably have taken another 10 years to get to Monty Python.”

Cleese has previously joked that it’s a good thing Python isn’t around in the age of Donald Trump because, frankly, the US President is impossible to satirise.

“I remember talking with Billy Connolly and we both agreed the world was getting crazier than anything we could think about,” he says.

“That was about 30 years ago and it’s got madder and madder. There’s no sense of values any more. My accountant said something profound, ‘It’s all about rules and not about principles’.”

That said, he is not convinced Python would even get made today.

“There was a guy from BBC light entertainment who said he wouldn’t commission it now because it was six white guys.” 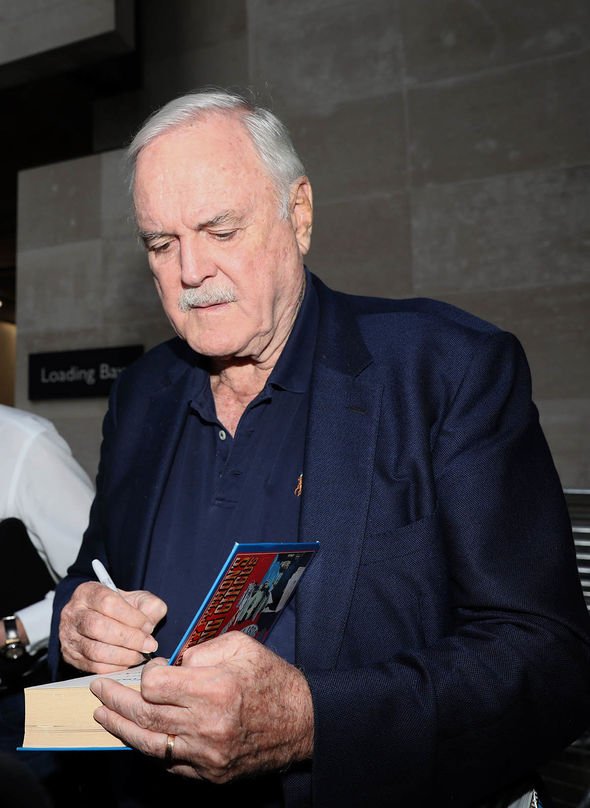 He recently recorded a comedy monologue – live streamed from London’s Cadogan Hall, entitled Why There Is No Hope – around the premise that we’ve no chance of living in a rational or well-organised, society.

A last minute change in coronavirus rules meant he performed to an empty auditorium, quipping affectionately it was “like Michael Palin’s fan club”.

Democracy is in a dire state, he explained, because most of us have no idea what we’re doing, and the very worst performers – be they bankers, doctors, politicians or TV producers – have the least awareness of their shortcomings.

As for himself, he laughs: “I have achieved a height of wisdom as defined by Plato. I now realise there’s almost nothing I completely understand. For example, how can 40 per cent of the US electorate want Donald Trump as president? I have no idea!” 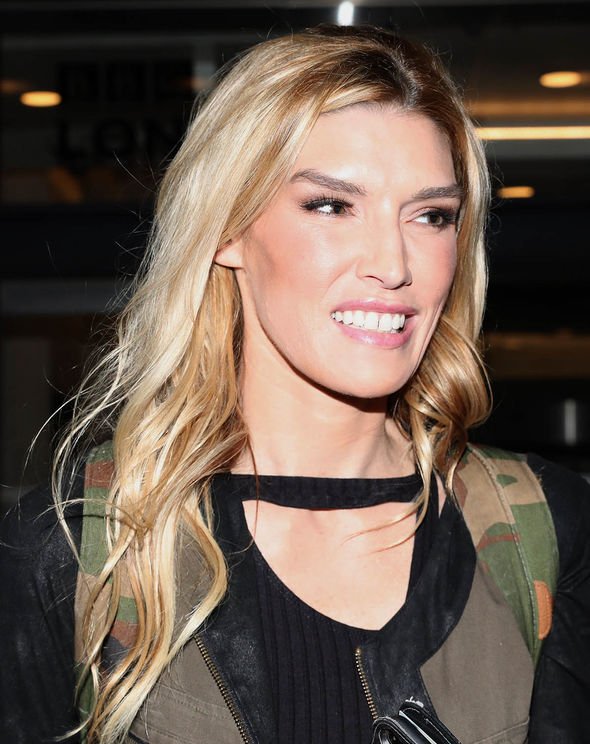 He continues: “I think if Trump is [re-]elected, it will be the end of American democracy, it’s as simple as that.”

His Twitter followers will already be aware of such opinions.

And, rarely for a celebrity, he is unrepentantly outspoken.

“I’d much rather be interesting. I don’t mind people disagreeing with me. If they insult me, I feel free to insult them back,” he says.

“Some evenings I just sit down and talk to my ‘Twits’ for half-an-hour and, if I can think of a few good jokes, well I can’t hear them laughing, so it’s not as good as going in front of an audience but it’s still entertaining. 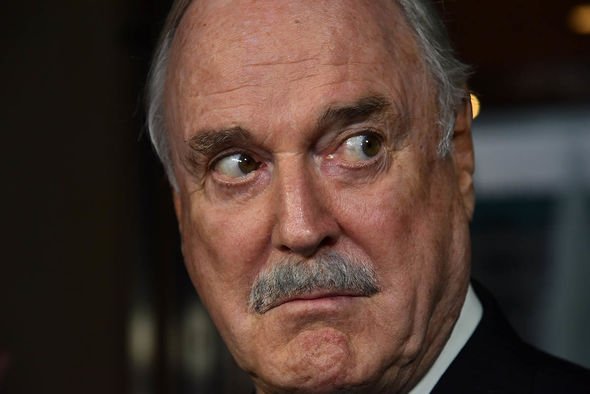 Earlier this year, he branded BBC bosses “gutless” after the classic 1975 episode of Fawlty Towers, The Germans, was briefly pulled from the corporation-owned UKTV channel over claims of “racial slurs”.

He has also railed against “wokeness” and the stifling effect political correctness can have on comedy.

“There are two ways of making fun of things. One is to attack it directly and the second is to put those views you want to make fun of into the mouth of somebody ridiculous like Alf Garnett,” he explains. 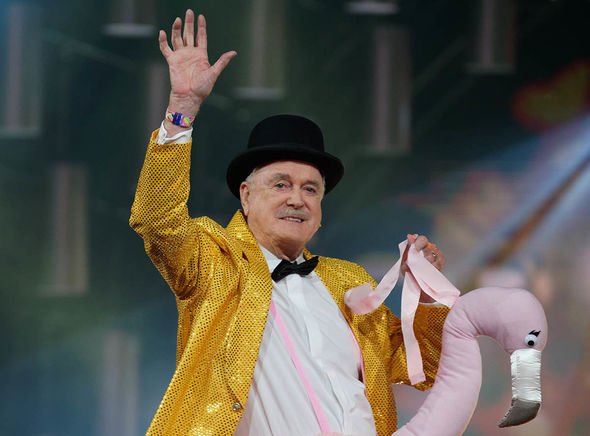 “It’s ridiculous that questions of taste should be decided by the most sensitive, easily upset people. Comedy is about things going wrong. If they all go right, it’s not funny.”

So why have we become so thin-skinned?

“I think we feel powerless to deal with questions more important issues.

“There are many things that are beyond us but we can get angry when someone says artichoke and it’s been designated an unacceptable word.

“We’ve discovered if we have each other and four cats we don’t care much about anything else,” he says.

Finally, any interviewer is practically obliged to ask – could there be a second Python reunion with Eric Idle, Michael Palin and Terry Gilliam?

“The [2014] reunion was lovely, Eric said it was a very sweet goodbye and I agreed.”

Cleese pauses, then quips: “With two of them dead, my hopes are the other three die, because then I can tour the world as the sole surviving Monty Python. I should be able to make a fortune!”

Celebrities
Kate McKinnon Opens Up About the "Profound Joy" of Portraying Ruth Bader Ginsburg on SNL Kate McKinnon is paying homage...
Lifestyle
Cardi B introduced her daughter's page on Saturday night, where it quickly snatched nearly 500,000 followers. Okay, maybe it isn't...
TV & Movies
We will use your email address only for sending you newsletters. Please see our Privacy Notice for details of your...
World News
A MUM has told how her friend seduced her 13-year-old son and had a baby with him while babysitting him...
Beauty
Many of us are spending most of our time at home as we practice social distancing. Whether you're working from...
Fashion
In college, Symphony Clarke had a rich roommate, who she says “would look so bomb” when the two would go...
Recent Posts
We and our partners use cookies on this site to improve our service, perform analytics, personalize advertising, measure advertising performance, and remember website preferences.Ok