The Prince and Princess of Wales surprised sports fans on Wednesday as they made an appearance at a Boston NBA game.

Despite their long journey across the Atlantic, the royals were in high spirits as they sat courtside to watch Boston Celtics take on Miami Heat.

And they even happily posed for a rare selfie taken by the Mayor of Boston, Michelle Wu.

DISCOVER: Princess Kate and Prince William to reunite with the Sussexes this week?

William and Kate can be seen smiling for the camera – with the Princess looking flawless in her Chanel jacket – as they posed alongside Governor-elect of Massachusetts Maura Healey, and Emilia Fazzalari, wife of Boston Celtics owner Wyc Grousbeck.

Fans adored the candid snapshot with one writing: “Aw love this picture! Please send them lots of love and look after them x.” A second wrote: “Princess Kate really is beautiful.” And a third added: “Great photo!! @KensingtonRoyal are the good luck charms – Celtics Won!!!”

MORE: Why Prince William and Princess Kate are ‘super excited’ to arrive in the US

At the start of the basketball game on Wednesday night, the Prince and Princess were seen watching intently as the Celtics raced into an early lead. They later stood for the national anthem The Star Spangled Banner before being introduced by a stadium announcer and shown on the big screen. 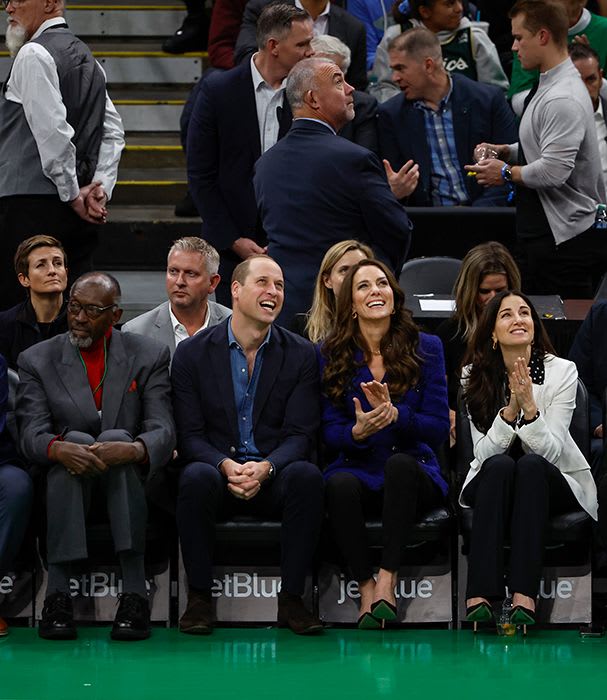 The couple were in high spirits at the game

Thursday will see William and Kate visit Greentown Labs, a tech hub which has been nurturing climate pioneers for more than a decade.

Greentown is believed to be the largest climate technology start-up incubator in North America, having supported more than 500 companies, since founded in 2011, that have created more than 9,000 jobs and raised more than four billion dollars (£3.3b) in funding.

Kate stole the show in her Chanel tweed jacket

They will also tour Roca, a non-profit organisation focusing on young people at risk of becoming involved in urban violence.

The couple will meet with leaders of the organisation to learn about their intervention model and spend time with women in the young mothers’ programme, current members and alumni of the young men’s programme.

Make sure you never miss a ROYAL story! Sign up to The Royal Explainer newsletter to receive your weekly dose of royal features and other exclusive content straight to your inbox.