Larsa Pippen previously starred on ‘RHOM’ back in 2011! The 46-year-old is ‘seriously considering’ joining the the show again if it returns for a 4th season.

Larsa Pippen, 46, could be dipping her toes into the reality world again. Scottie Pippen‘s ex-wife made her television debut as a main cast member on The Real Housewives of Miami back in 2011 — although she only stuck around for a season, sources tell us that she is “considering” returning for the fourth season of the Bravo series. “Larsa is in Miami and is not coming back to LA anytime soon. She loves it there. One thing has nothing to do with the other, but she is seriously considering joining the RHOM cast,” a source spills to HollywoodLife EXCLUSIVELY.

“Nothing has been signed yet, but she’s thinking about it. She’s just a little skeptical because she doesn’t know if it’s right for her right now,” the insider went on. “She’s kind of playing devil’s advocate right now but there’s definitely been conversations,” they added. Real Housewives of Miami ran for three seasons on Bravo between 2011 and 2013, with Lea Black, Adriana de Moura, Alexia Echevarria and Marysol Patton appearing throughout. Although it’s been off the network for eight years, Andy Cohen has previously confirmed he was looking to revive the series. 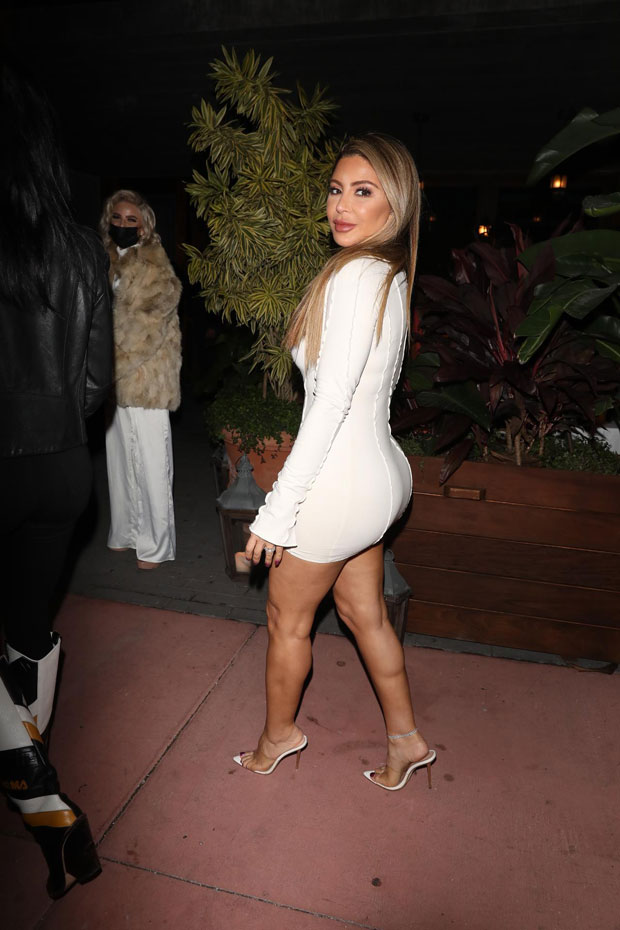 “I have really been trying to get [NBC’s streaming platform] Peacock to pick up Miami,” Andy said to Everything Iconic podcast host Danny Pellegrino in Nov. 2020. “I don’t know if I’m allowed to say this. I don’t know where we are with that. I have to say the fans of Miami are still very vocal, and so I’ve been an advocate for Peacock bringing back Miami,” he also said, noting that the series suffered after Marysol’s mother Elsa Patton became ill. Elsa sadly passed away in 2019 after a long illness.

“I think Miami as it was on Bravo really suffered from Mama Elsa not being around in season 3,” Andy reflected. “She was very sick. I think she was a more important part of that show than people realized. The problem with the third season was that the ratings were declining as it went on and they went down for the reunion, which is usually the opposite of what happens. I think that went into the decision to not pick it up,” he added.

As for Larsa, much has changed for the mom-of-four since she last appeared: back in 2010, she was still married to Scottie and parenting four young kids! Her eldest sons are all grown up as Scotty Jr. is now 20, while Preston is 18. She is also mom to son Justin, 15, and her mini-me daughter Sophia, 13. While Larsa and Scottie aren’t officially divorced, she has since moved on with Minnesota Timberwolves player Malik Beasley, 24.

If the series does return, it’s unclear if any of the previous women are also in talks to potentially return to the show — but Wendy Williams has expressed interest! “The network has been interviewing other cast members too. They’re in the process of figuring out the cast,” our source revealed. “It also could be a one off situation instead of a long term show. They’re still trying to figure out what this is,” they added.