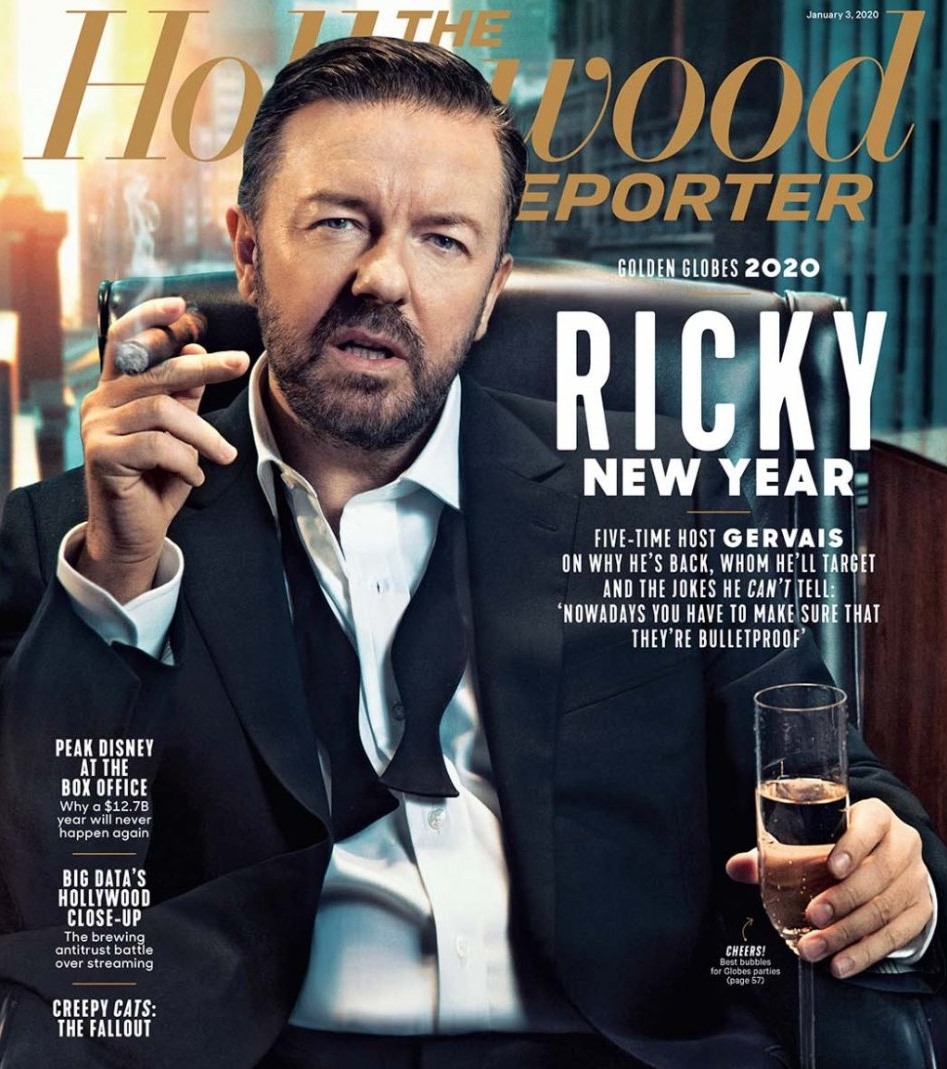 Ricky Gervais covers the new issue of The Hollywood Reporter. He’s promoting his gig as host of this year’s Golden Globes, which happen on Sunday. If I’m being honest, Gervais is the reason why I’m not really looking forward to the actual awards-ceremony, and yet I’m somewhat happy – as a gossip blogger – that he’s the host. What I mean is that Gervais will bring a very tense edge to what should be a fun drunk night, as everyone will be parsing every problematic joke he tells. But that also means that people will watch *just* to hear what he says, and it means that the stories will write themselves, which makes my job easier. The Hollywood Foreign Press Association wanted controversy, and they got it: Gervais has already made vague, transphobic tweets and in this interview, he makes a lot of promises which he won’t keep. Some highlights:

Why he likes the hosting gig: “Because it’s fun, it’s fun! That first time I did it, [I thought], “Do I pander to the 200 privileged egos in the room, or do I try and entertain a global audience of 200 million people sitting at home who aren’t winning awards?” Well, no contest. I try and make it a spectator sport. I try and play the outsider. It would be nauseating for me to come out and go, “Hey, George, how you doing, thanks for letting me use your villa. Hey, Brad, see you tonight, yeah?” It’s horrible. I’ve got to be the bloke sitting at home who shouldn’t have been invited. That’s who I’ve got to be.

He writes his own “bulletproof” jokes: “I start writing immediately. Before I decide to do it, I have to go, “Have I got anything? What’s happened?” … I write jokes and they’re considered and I make sure they’re bulletproof. Nowadays, you’ve got to make sure they’re bulletproof in 10 years’ time, with people going through saying, “He said this once, 10 years [ago].” Kevin Hart [lost] his job [as Oscars host] for 10-year-old tweets that he said he was sorry about and deleted at the time. So there’s more pressure on making [the jokes bulletproof]. It’s the world [watching]. This isn’t me in a comedy club.

His “parody persona” posting transphobic tweets: “Jarvis Dupont is a spoof Twitter account, and the joke is that he’s so woke that he’s actually gone full circle and does terrible things. And his latest [bit] is, “I’m trans now.” And he gets all that wrong. And I responded by playing along with him, saying, “Oh, you’re so much better than biological women because they’ve had a lifetime to get used to it.” Now, people saw my tweet and they thought he’s a real trans person, but I’m taking the piss out of Jarvis Dupont, who is actually a woman in real life. And this is the problem. You can say, “Listen, I was joking. It’s a joke.” But that’s not always enough for people. They go, “Well, why were you joking?” Also, add to that the nature of Twitter — it’s so curt, there’s no nuance, it’s there forever out of context.

The idea that he’s pushing back on “woke culture”: “People like the idea of freedom of speech until they hear something they don’t like. So there’s still a pressure, but that doesn’t mean I’m going to water it down or back down and not say what I want. It’s just another form of what we’ve been through many, many times — it used to be called P.C. I think those things start off with very good intention and then they’re mugged. It’s a good thing to not be racist and sexist and homophobic. But it’s not a good thing to not be allowed to make jokes about those things, because you can tell a joke about race without being racist. I’m happy to play by the rules. It’s just that the 200 million people watching have different rules. That’s the plight. When people say, “He crossed the line,” I say, “I didn’t draw a line, you did.” It’s relative. It’s subjective.

When people say he’s transphobic: “I just say I’m not. And there’s nothing else you can say, you know? Yeah, I’m not. I can justify the jokes, but I get it. Some people, when you deal with contentious issues or taboo subjects, the very mention of them is the sacrilege. That’s why they stay taboo. People straight away, particularly with a comedian, if you’re joking about a subject, they think you’re anti it as opposed to pro it. I’ve tried to explain this in Humanity. It’s an occupational hazard of being outspoken. I think offense is the collateral damage of free speech, and it’s no reason not to have free speech. That’s what I’d say — it’s the lesser of two evils. Having free speech and some people getting upset by it is the lesser of two evils because not having free speech is horrendous.

Whether he’ll call out any celebrity in particular: “I might do the odd one, but again, only if it’s bad behavior. But I’m all for forgiveness as well, so if someone gets drunk and says something awful, I can tease them, but I don’t want them imprisoned. Bad behavior’s not always a terrible, criminal, punishable offense. Sometimes it’s like, “You’ve embarrassed yourself, mate.” There are a thousand people in that room and they’ve probably all done something worthy of a bit of ridicule. But we’re not hunting Nazis. We’re going after people who were a bit rude or got drunk and insulted a waiter.

There’s one really nice part of the interview where he compliments all of the American late-night hosts, like Jimmy Kimmel and Jimmy Fallon and Colbert and Jon Stewart and Conan. He seems to have a genuine respect for them and what they do, and he also confesses to being approached about doing a late-night hosting gig a few times in America and turning it down because he didn’t think he could do five nights a week. As for the rest of it… I’m so exhausted with white dudes telling us that they have the right to endlessly punch down on marginalized communities because of “jokes” and the sacred rules of “comedy.” I understand the argument that comedians need to workshop jokes in front of an audience and see what works and what the audience doesn’t like. But I also think that some people – like Gervais – just like to punch down. And they hate it when they’re called out on it. 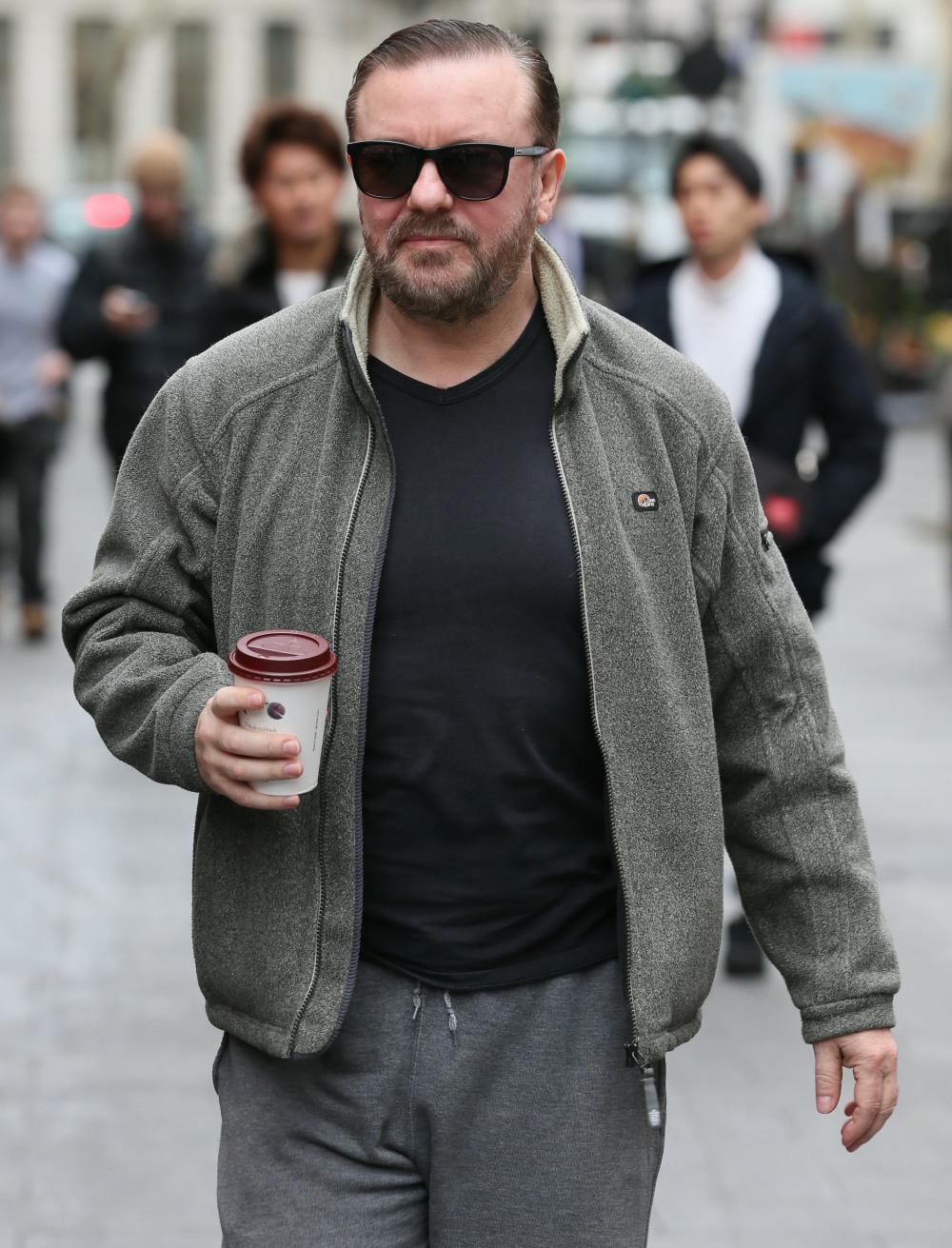