As news crews began to clear out of Kenosha, Wisconsin, over the weekend, so too did the demonstrators who had ardently shown support for Kyle Rittenhouse last week before jurors decided to acquit the 18-year-old of all charges. The few dozen protesters who remained — most of them from the local community — marched on Sunday with one clear message: There’s much work yet to be done before Kenosha can heal.

At the helm of the demonstration was Justin Blake, the uncle of 29-year-old Jacob Blake, who was shot seven times by a police officer in Kenosha last August, spurring days of unrest. It was in the aftermath of Blake’s shooting that Rittenhouse came to Kenosha, heeding a call to defend local businesses from destruction that had left the city reeling. Justin Blake has been pushing for justice ever since.

Meet the Beatle: A Guide to Ringo Starr's Solo Career in 20 Songs

Trailing him on Sunday were several supporters toting guns in anticipation of retaliation from pro-Rittenhouse activists. Rolling Stone counted at least six people escorting the march with firearms ranging from semiautomatic rifles to handguns — all permissible per Wisconsin’s open carry laws. Some patrolled the group’s perimeter, while others were camouflaged by the crowd. One man, who declined to share his name, brought both a rifle and his dog, Buddy, who was equipped with his very own walkie-talkie. A few lacked weapons but wore bulletproof vests. Medics were on hand. 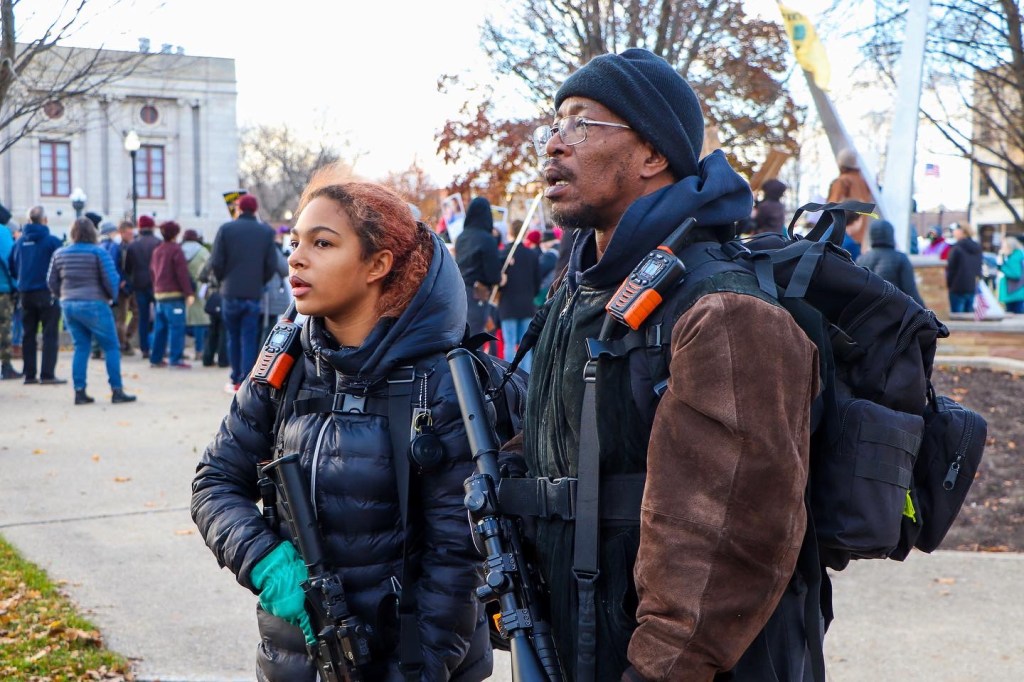 The march began in Civic Center Park, where Blake pleaded with Kenoshans to deliver an “economic crushing blow” by boycotting the businesses that supported Rittenhouse’s actions. Blake was joined by Bishop Tavis Grant II, national field director with the Rainbow PUSH Coalition. “This a new day,” Grant said. “Those who financed this defense: You just awakened a giant, you just awakened the conscience of people who won’t take no for an answer. And we will not accept this verdict. We have alternatives. And we’re going to use peace, protest, and civil disobedience.”

Joseph Rosenbaum’s fiancée, Kariann Swart, and Wisconsin state Rep. David Bowen also spoke to those gathered in the park. Swart urged listeners to remember her fiancé, one of the men killed by Rittenhouse, because the victims’ families have “no closure, none whatsoever.” Rep. Bowen challenged those who supported Rittenhouse’s right to self-defense to also support Chrystul Kizer, a Black woman and child sex-trafficking victim accused of killing her abuser, with the same fervor.

Following speeches wrought with anger and heartache, the group marched through downtown Kenosha, with Blake stopping along the route to point out the businesses he plans to boycott, including a car lot just a few blocks from the courthouse.

Although business owners testified last week that they didn’t ask Rittenhouse or the other armed men he was with to protect their businesses, some say they benefited from the actions of armed civilians who came to Kenosha to “defend out [sic] City tonight from the evil thugs,” after a Facebook group with over 4,000 respondents called for such amid the city’s civil unrest.

The since-removed Facebook post was made by former alderman and contentious local figure Kevin Mathewson, whose group the Kenosha Guard was barred from Facebook for violating the site’s “dangerous organizations policy.” Mathewson told Rolling Stone last week that he has no regrets over a year later. “I did what I thought was the best thing I could do for my community,” he said. “It’s sad that people died. But you know, we have the right to do it. Now, we’re here past the verdict. Now this community needs to move on.”

But for some Kenoshans, moving on isn’t possible because the issues that brought Rittenhouse to the city in the first place still linger.

“The verdict doesn’t really matter in reference to the work that we’re trying to do,” Anthony Kennedy, who represents Kenosha’s 10th District and is one of just two Black aldermen out of the city’s 17, tells Rolling Stone. “There’s still work in this community, there’s still good people who are going to continue to dedicate their energy, their time, effort, their talents, to solving or discussing some of these serious — very serious — problems.” 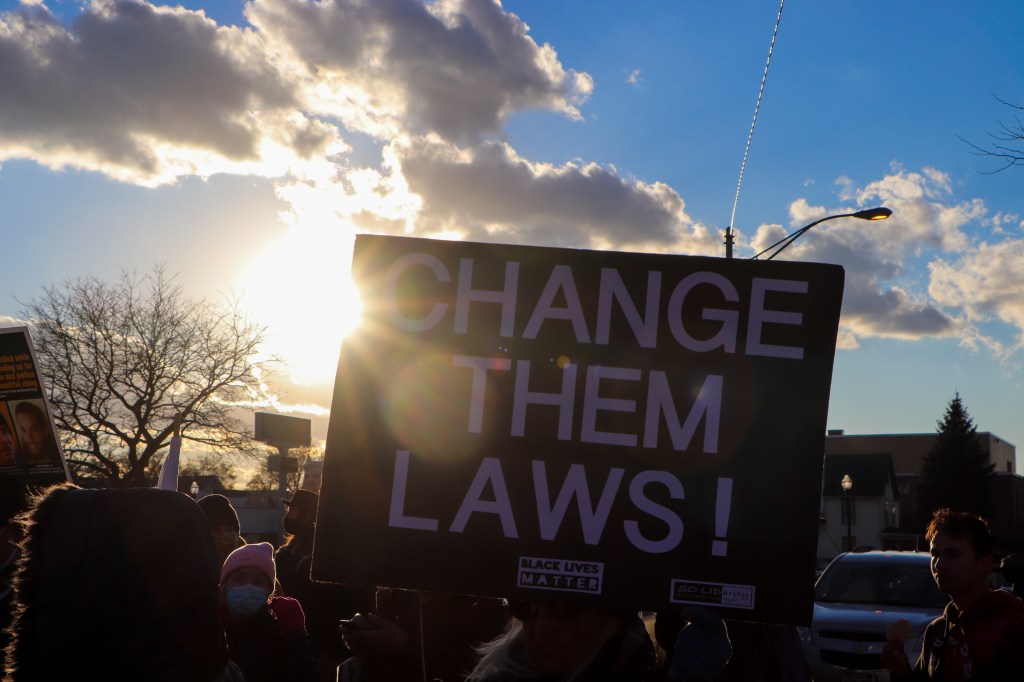 One of the signs held by protesters during a march in Kenosha, Wis. on Nov. 21, 2021. (Madison Muller/Rolling Stone)

Kennedy said that the city has made immense progress in the last year since Blake was shot in addressing racism and reforming relationships with law enforcement, including the addition of the Kenosha Police Department’s first-ever LGBTQ+ liaison. Among the position’s successes is facilitating officer training for respectful interactions with members of the transgender community.

But Kenosha is still rife with tension. The way forward, the way to address these lingering issues, Kennedy said, is to minimize the impact of harmful players on the community. He tells Rolling Stone that boycotting businesses who supported Rittenhouse is a good start.

The community feared violence after Rittenhouse’s verdict. Several of those marching on Sunday carried guns in an effort to ensure a peaceful demonstration. It was a testament to the resilience of a community that was fighting for justice well before Rittenhouse’s trial, and well before Jacob Blake’s shooting.

Longtime Kenosha resident Gerald Jones, like many of the others who attended the march, understands that the fight must continue now that the media and outside agitators are making their way out of town. “We don’t want the place to be torn down,” he said on Sunday. “We just can’t have peace yet.”