Less than a month after disgraced attorney and former New York City Mayor Rudy Giuliani publicly announced that his account on the celebrity messenger app Cameo was open for business, it seems the on-and-off-again Donald Trump sycophant has already uploaded a controversial — if not somewhat bizarre — personalized video on the platform. As New York magazine’s Intelligencer reported on Sept. 1, the recording-in-question featured Giuliani rattling off an apparently personalized message paid by an app customer — one who bashed a client Giuliani represented before his law licenses were revoked earlier this year.

As Intelligencer explained, Giuliani’s message, which was obtained by the media outlet, featured the one-time attorney thanking a number of individuals, many of whom are journalists, for their investigation into the energy firm Derwick Associates. Per Intelligencer, the firm is owned by Venezuelan entrepreneur Alejandro Betancourt, who was allegedly aided by Giuliani in warding off charges of bribery and money laundering through his connections to then-President Donald Trump.

Addressing Betancourt’s adversaries by their first names — among whom include journalists Angus Berwick, Cesar Batiz, Orlando Avendaño, and Alek Boyd, along with activist Thor Halvorssen and former U.S. ambassador Otto Reich — Giuliani appeared to thank them all for their work in making Betancourt, through Derwick Associates, accountable for his possible misdeeds. However, as both Intelligencer and HuffPost pointed out, purportedly the message itself isn’t exactly what it appears to be. Read on after the jump to find out. 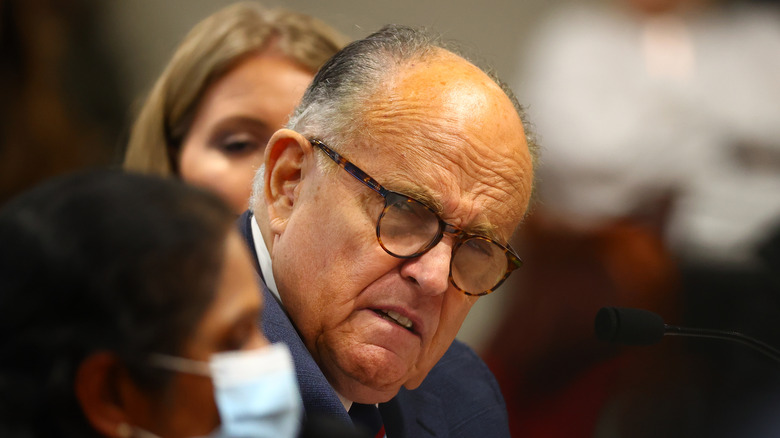 In its reporting on Rudy Giuliani’s Cameo stunt, HuffPost speculated that his message to journalists and anti-corruption activists who investigated Derwick Associates founder Alejandro Betancourt was actually a seamlessly executed instance of trolling. The message, which was casually addressed to “Angus, Cesar, Orlando, Alek, Thor, Otto,” supposedly on behalf of “the staff of Derwick Associates,” featured Giuliani speaking for his former client.

In the personalized video posted to the app, Giuliani stated that “the employees and the field staff of Derwick Associates want to thank you for your honesty and devotion, that you have fought for them for years and that — um — you’re very, very exceptionally dedicated,” which seemed counterintuitive to what a lawyer would say to people who had worked to expose possibly seedy dealings made by an entity they represented. Even more strange was Giuliani’s further commentary on the video. “Well, that’s a nice thing!” Giuliani added after relaying the scripted material. “I really wish somebody would send me a message like that!”

According to Intelligencer, at least one person named in the Cameo vid took it all as a prank orchestrated by unknown persons. Speaking with Intelligencer, Thor Halvorssen, one of those mentioned in the recording, called the whole thing “hilarious, pitiful, surreal, and illustrative of [Giuliani’s] moral rot.” Whether or not anyone comes forward to take ownership of the prank remains to be seen.