Editors note: Deadline’s Read the Screenplay series debuts and celebrates the scripts of films that will be factors in this year’s movie awards race.

Oscar-winning screenwriter William Monahan (The Departed) admits that after he agreed to adapt author J.R. Moehringer’s memoir into the feature film The Tender Bar a wave of apprehension struck him, he said, “because it’s a very popular book – a lot of people, it’s their favorite book. And I found that out after I said yes, so you get a little nervous about it.”

But Monahan quickly found his own way into the material: How gifted writer J.R. (played by Daniel Ranieri as a child and Tye Sheridan as a young man) is raised by his struggling single – and single-minded – mom, Dorothy (Lily Rabe), determined that her son would go to Harvard, with the help of her brother Charlie (Ben Affleck), a well-read bartender, and the rest of her family, even as J.R. struggles with the consistent absence of his father (Max Martini), a silky-voiced but irresponsible and alcoholic disc jockey.

The screenwriter recognized the qualities that struck chords with so many readers. “The lost father. The particular loneliness of being an only child of a single mom. The search for surrogates. The terror of being at an Ivy League college — any college, really — and feeling that you don’t belong, academically or socially or both,” Monahan said.

“It’s the story of a not-privileged kid deciding to do the fundamentally impossible,” he explained. “But beneath the ordinary world, it is kind of an epic. It’s the very rare first book by a writer who doesn’t throw family and friends under the bus after chewing them up for material. It says of the family, ‘I am them and they are me.’”

Monahan also found a personal connection to the material. “In the 1970s a door is supposedly open for women, but then when they went through it, there wasn’t really anything on the other side,” he explained at a recent post-screening Q&A. “My own mother was one of the one of the people who went through that door and then nothing would come together…And so that really resonated with me.”

Director George Clooney appreciated Monahan facility adapting the material from page to screen. “They’re two completely different animals,” he said. “A book will tell you what someone is thinking, and a movie has to show you. But we think we stayed true to the essence of the book. The Tender Bar is still a story about class, about being raised in a bar and about the intimacy of family.”

“Family matters and love is actually the answer,” agreed Monahan. “If someone hurts you or doesn’t love you, you don’t need them. Wherever you start in life, you can do anything in the world if you try. These things are all in the picture. I took them to heart in the writing, and when I saw the film I thought ‘Maybe other people will as well.’”

Click below to read the screenplay for the pic, which Amazon opened in theaters December 17. The film will be available globally for streaming January 7 via Prime Video. 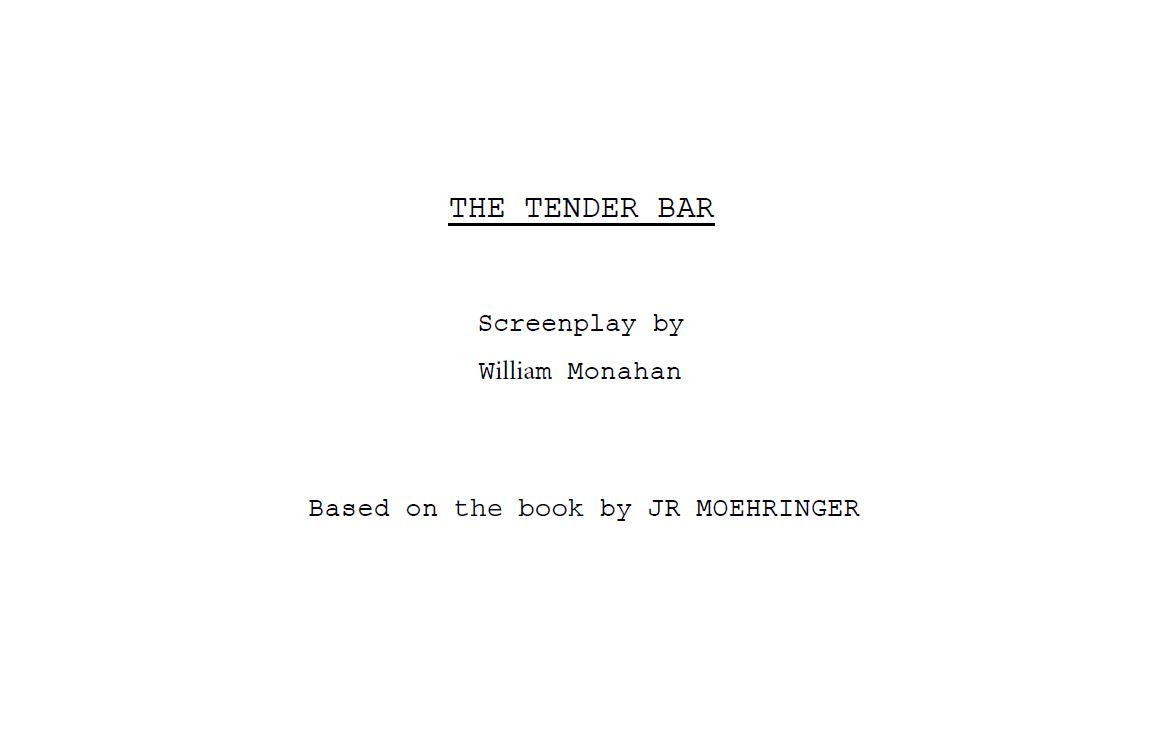 ‘Last Night In Soho’: Read The Screenplay For Edgar Wright And Krysty Wilson-Cairns’ Take On The Dark Side Of ’60s London