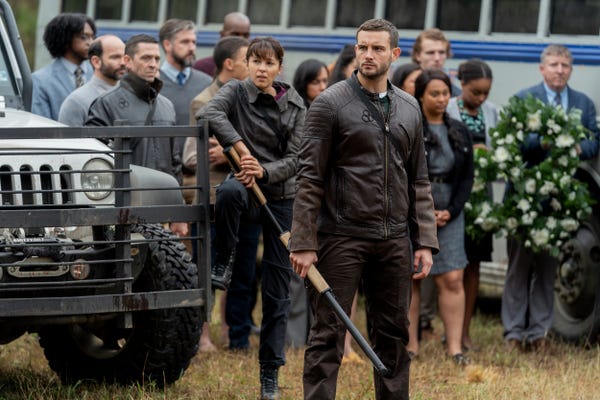 Nico Tortorella stars on the new "Walking Dead" spinoff, "The Walking Dead: World Beyond," but the actor nearly could have joined "TWD" universe years ago as a different lead character.

"I auditioned for 'Fear the Walking Dead' and I didn't get," Tortorella told Insider from the set of "TWD: World Beyond" in Richmond, Virginia last November. "I never watched it because of that."

Who did he audition for? One of the lead characters, Nick.

"For the son, for the heroin addict," Tortorella said of his audition.

Instead, Frank Dillane played Nick Clark on "Fear" from 2015 to 2018 until the actor asked to leave the show on season four. As a result, Nick was killed off the show.

While the "Younger" star was in Indonesia doing work with queer youth last summer, Tortorella — who uses they/them pronouns — received a call from their team saying showrunner Matt Negrete and chief operating officer of "TWD" universe Scott Gimple wanted to jump on a call and have a conversation about "World Beyond."

"All I knew was that the character was queer and I was excited to jump on the phone," said Tortorella, who hadn't auditioned or read a script for the series. "We had about a two-hour conversation and walked through a lot of the politics of the show."

Tortorella inquired about the necessity for another "Walking Dead" series and why this one mattered before joining. They were interested in the ultimate goal of the show, which sounds like it will lead to the previously announced Rick Grimes/"Walking Dead movies.

"I understood how massive 'The Walking Dead' universe was after that phone call," said Tortorella. "Pieces are getting put together to lead us to the movies, which will then lead us to even more storylines. It's all part of a bigger picture and we're just characters in this story."

Tortorella isn't playing a heroin addict on "World Beyond." Their character, Felix, is the head of security detail at a community in Omaha, Nebraska.

A personal connection to the show

One line that really stayed with Tortorella, who identifies as non-binary, was when Gimple told him, the binary that exists post-apocalypse is "dead" and "alive," and it clicked.

"It made so much sense to me. So I was in," said Tortorella.

Tortorella was in Richmond, Virginia, three days later on July 23, 2019. Filming began a week later on the actor's birthday. Coincidentally, it's a birthday Tortorella shares with their "World Beyond" character, Felix.

"TWDWB" premieres on Sunday, October 4 at 10 p.m. on AMC. You can follow along with our "Walking Dead" coverage here.