“Well, Kevin, I guess these people are more upset about the election than you are,” Trump said during the call, according to CNN 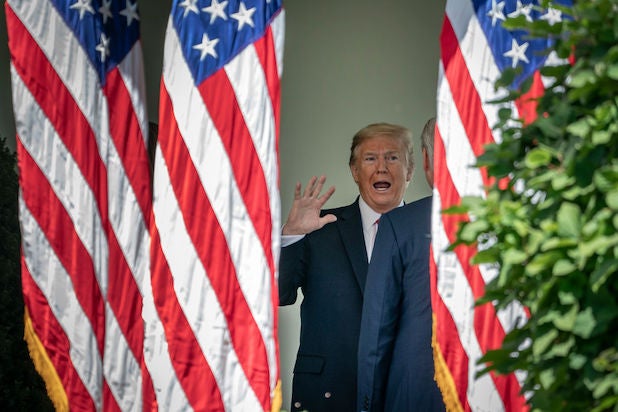 Then-President Trump and Rep. Kevin McCarthy pictured together outside of the Oval Office in April 2020. (Photo by Drew Angerer/Getty Images)

Then-President Donald Trump refused to call off the insurrectionists who attacked the U.S. Capitol on Jan. 6 during a heated call with House GOP leader Kevin McCarthy, CNN reported on Friday.

According to lawmakers briefed on the call who spoke with CNN, McCarthy told Trump the rioters were Trump supporters and asked him to call them off.

“Well, Kevin, I guess these people are more upset about the election than you are,” Trump responded, according to the lawmakers, leading to an expletive-laden shouting match between the two.

McCarthy then told Trump that the rioters were breaking into his office and shouted, “Who the f–k do you think you are talking to?”

Last month, as the House was voting to impeach Trump, McCarthy said the then-president “bears responsibility” for the attack but ultimately voted against impeaching Trump.

Republican Rep. Jaime Herrera Beutler, who confirmed to CNN that Trump said the rioters cared more about the election results than McCarthy, told CNN that Trump’s comments were “impeachable.”

“You have to look at what he did during the insurrection to confirm where his mind was at,” Beutler told CNN. “That line right there demonstrates to me that either he didn’t care, which is impeachable, because you cannot allow an attack on your soil, or he wanted it to happen and was OK with it, which makes me so angry.”