IT'S supposed to be the most important day of your life – so it's only natural that most brides want all eyes to be on them at their wedding.

That said, the only fashion "rule" guests have to follow is avoiding the colour white at all costs – but that wasn't enough for one bride-to-be. 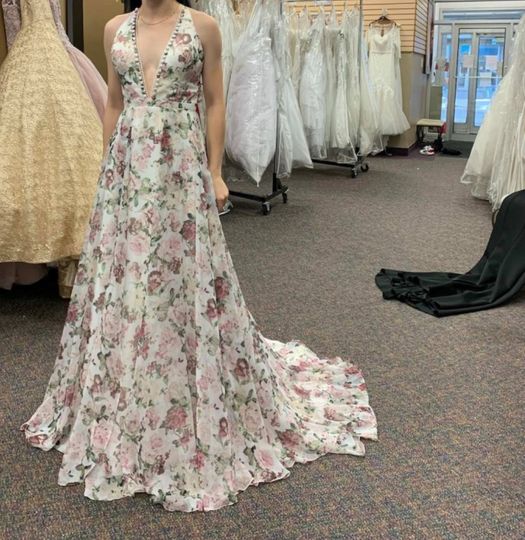 Posting on the Facebook group That's It, I'm Wedding Shaming, the Canadian bride explained how one guest is planning on wearing floral full-length dress to her winter wedding later this year.

"She is not being malicious," the bride wrote. "Rather [she is] being encouraged by people to wear it. My family, specifically my mom, think I'm insane to have any questions about this dress."

As well as taking issue with the dress' train, the bride feared it would detract from her own gown – and not fit in with her small ceremony.

"I'm certain the person in this picture is just trying hard to look nice for our wedding and that her intentions are coming from a good place," she continued. 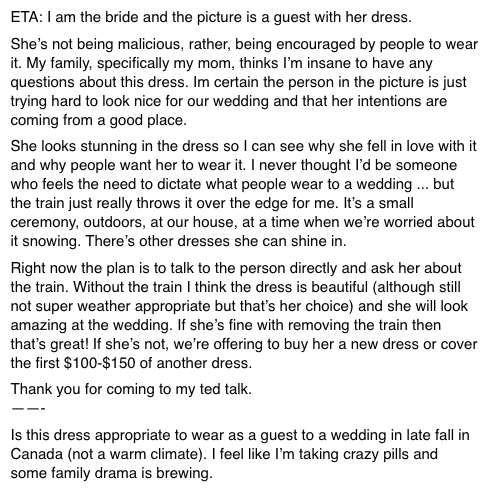 Although the bride hates to admit that she cares about what her guests wear, she added: "The train really just throws it over the edge for me.

"It's a small ceremony, outdoors, at our house, at a time where we're worried about it snowing. There are other dresses she can shine in."

With this in mind, the bride is now planning on asking the guest to remove the train or find a new dress entirely.

She continued: "Without the train, I think the dress is beautiful (although still not super weather appropriate but that's her choice) and she will look amazing at the wedding.

The train really just throws it over the edge for me. It's a small ceremony, outdoors, at our house, at a time where we're worried about it snowing. There are other dresses she can shine in…

Turning to the group's thousands of members for advice, she added: "I feel like I'm taking crazy pills and some family drama is brewing."

So do YOU think the floral frock is inappropriate wedding guest attire?

Well luckily for the bride, the majority of members agreed with her. 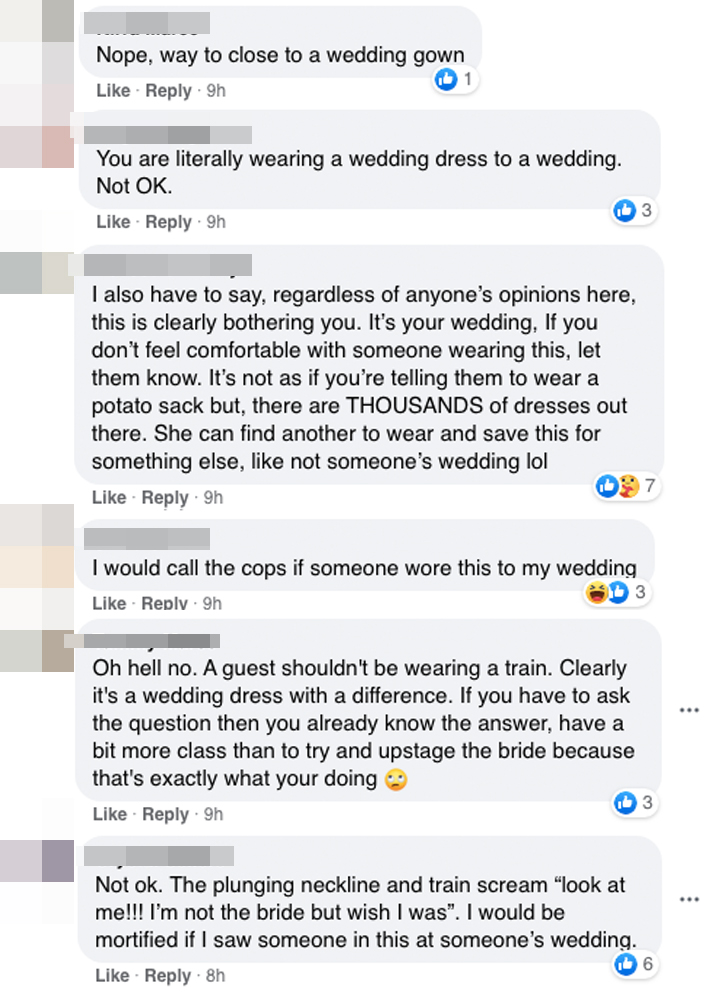 "I would call the cops if someone wore this to my wedding," one joked.

"Not okay," another added. "The plunging neckline and train scream 'look at me, I'm not the bride but I wish I was!' I would be mortified if I saw someone in this at someone's wedding."

A third wrote: "I also have to say, regardless of anyone's opinions here, this is clearly bothering you.

"It's your wedding, if you don't feel comfortable with someone wearing this, let them know. It's not as if you're telling them to wear a potato sack – there are literally THOUSANDS of other dresses out there."

For more wedding fails, this bridezilla issued a bonkers list of wedding rules including BANNING them from talking to her & they must bring a £60 gift.

And people praised this bride’s stunning white lace dress… until they realised it’s actually her MOTHER.

Plus this bride defended inviting COVID19-positive grandma to wedding days before she passed away- but people think she’s ‘selfish’.