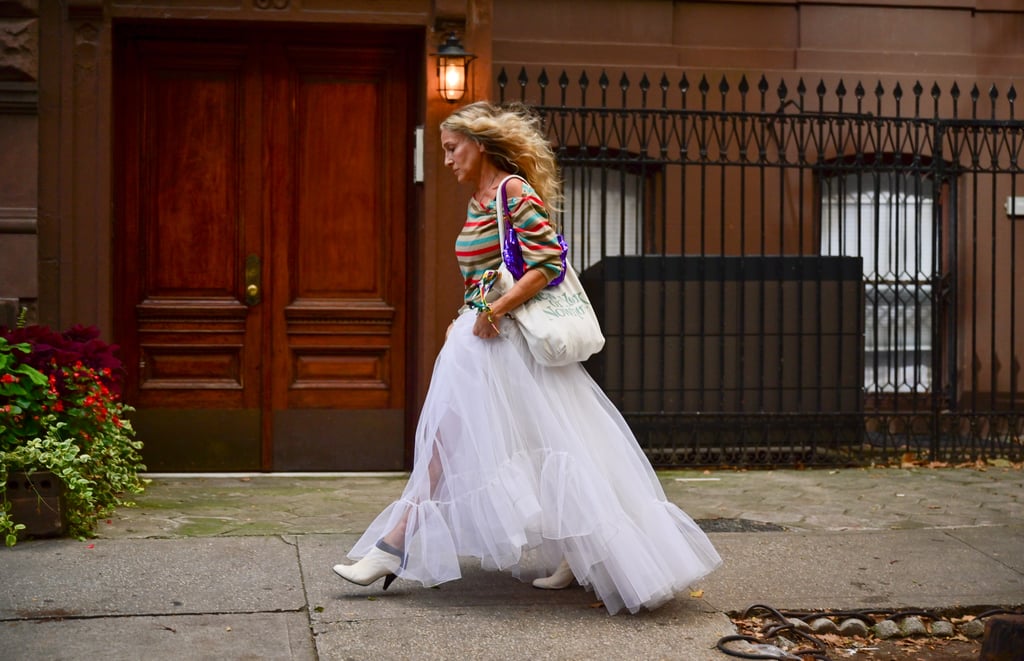 Carrie Pairs a Fendi Baguette Right Alongside a $45 Canvas Tote, the Definition of High-Low

As POPSUGAR editors, we independently select and write about stuff we love and think you’ll like too. If you buy a product we have recommended, we may receive affiliate commission, which in turn supports our work.

“I was looking for a $7 dress to go with my $300 shoes,” Carrie memorably tells us in an early episode of Sex and the City, because a closet full of Manolos she may have, but Bradshaw knows something about thrifty fashion. That aesthetic is expertly carried through in And Just Like That via costumers Molly Rogers and Danny Santiago, and if ever there was a high-low style moment to post alongside a primer on the subject, it’s Carrie’s look in episode four of the new series.

True to form, Carrie emerges from her downtown brownstone, swathed in a tulle skirt and a rainbow-striped off-the-shoulder tee. It’s a classic Carrie look, down to the glittering purple Fendi Baguette — a limited re-edition of the beloved ’90s style she carried on the original show — tucked under her arm and the sustainable “New York or Nowhere” tote thrown over her shoulder. In fact, if you dreamed up an outfit for Carrie in this next chapter, you might have landed on something just like this — an evolution of the tulle skirt she famously wears in the opening credits of SATC, paired with an understated T-shirt, heels (naturally), and two bags — one for function and one for fashion. Because two things can be true: Carrie Bradshaw is something of a show pony and she’s also a very busy New Yorker who needs a place to stash her stuff while on the go.

Here, we shopped the high-low moment, including the iconic $4,300 Fendi. Now, you don’t have to do the searching for that $45 tote to pair with it, either. Shop both pieces, if you’re so inclined, below.