BRIDES and grooms have been known to turn up to their weddings in horse-drawn carriages, limos and even Ferraris.

Which is why one bloke has been slammed as ‘entitled’ after begging for a ride on his wedding day – then turning down cars which he thought were too cheap.

The husband-to-be shared a request on Facebook, asking if anyone had a car he could borrow for his wedding day.

It sounds reasonable enough, as he writes the date and time he’ll need the vehicle for.

And it seems he’s popular enough as a pal responds saying he can use his Telsa, but rather than graciously accepting the groom asks to see a photo.

And after seeing the make of the car, the bloke turns down the offer, saying: “Seriously? A Model 3? Trade it in for a model X and then maybe I’ll consider.”

But the cheeky groom fires back again, saying: “You offer me a mode 3 and you think I’m the d***?”

It seems the guestlist might have one less name, after the car owner replied: “Bro it’s a nice car, it’s brand new. All you have to say is no.”

The bloke fires back again, writing: “Okay then NO.”

Despite his petty behaviour, another pal offers up their car instead – a BMW.

They posted: “I will be out of town so I can’t make it to your wedding. You can borrow the M3 if you want.”

But it’s still not enough for the groom, who turns it down as well. 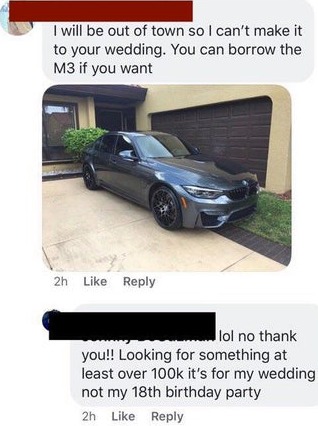 “Looking for something at least over 100k it’s for my wedding not my 18th birthday party.”

The shocking exchange went viral after it was uploaded to Reddit, with the bloke branded ‘entitled’ for his snobby attitude.

Commenting on the post, one person said: “He calls others broke when he doesn’t have a car.”

Another wrote: “Man. I wish I had friends that are willing to loan me a Tesla or BMW.”

A third added: “Why does this guy have two people willing to offer their car to him? I’d go to my wedding with a f****** golf cart if I was offered.”

Someone else commented: “M3 for my wedding, I would take that everyday.”

While this person added: “Something tells me these people don't want to be his friend anymore.”

Plus wedding guests are horrified when they’re served crisps, croissants & fruit as a meal & people brand it a ‘toddler lunch’.

And this bride of disabled husband hits back at cruel trolls who claim her marriage is a sham & she’s only with him for his money.

Celebrities
Eva Mendes has never been one to talk much about her personal life. She’s been in a relationship with Ryan...
Lifestyle
Ant Anstead’s split from estranged wife Christina Anstead is taking a toll. The British television host, 41, posted a photo...
TV & Movies
Movie star Jonah Hill and actress Beanie Feldstein are both super talented and funny — and as it turns out,...
World News
The Daily Star's FREE newsletter is spectacular! Sign up today for the best stories straight to your inboxA university student...
Beauty
Facials are magic when it comes to transforming meh-feeling skin into glowing, blissful radiance in less than an hour. Even...
Fashion
We don’t know about you, but our sweater drawers are almost entirely full of black and gray options. While we’re...
Recent Posts
We and our partners use cookies on this site to improve our service, perform analytics, personalize advertising, measure advertising performance, and remember website preferences.Ok