A BRIDE told how she married in a £20 wedding dress – which she spotted bundled and coffee-stained on the floor of her local TK Maxx while trawling the sales rails.

Their big day cost £28,000 less than the average UK wedding day which in 2018 was measured at an average of £30,355, according to Bridebook's wedding survey.

Zoe's veil was free – borrowed off a pal – and her bridesmaids' dresses were also £20 from Topshop.

Meanwhile the savvy couple – who planned their big day in just weeks – fed guests sandwiches and a salmon main, and bought fake flowers.

Zoe, from St Helens, Merseyside, told Fabulous Digital how pals didn't even know her and Andy were tying the knot, after they got married at what people thought was their engagement party.

Due to the spontaneous surprise plan, Zoe and Andy didn't have time to save up for their big day – but managed to save money on various things.

They asked her mum Viv Lavery's friends to chip in with food for all the guests, saving on catering.

Describing her cut-price do, Zoe explained: "The best bargain was definitely the dress.

"I looked at all the sales racks for my dress, and then finally spotted it on the floor of TK Maxx.

"The first time I saw it I thought 'No chance'. It had a coffee stain on it and was a bit grubby.

"But after we'd washed it, and my mum's friend altered it, it was perfect.

The first time I saw it I thought 'No chance'. It had a coffee stain on it and was a bit grubby.

"I borrowed my veil, it was a sentimental gift from a close friend, and it just happened to match the dress perfectly.

Viv, 58, added: "We bought cheap flowers and made bouquets ourselves, and one of my friends bought the cake as a gift to Andy and Zoe.

"Four of my friends did the catering too, they made sandwiches and hot food with salmon for everyone and did it so well, we were all really grateful."

"We paid for the food but they didn't charge for their time, which was lovely." 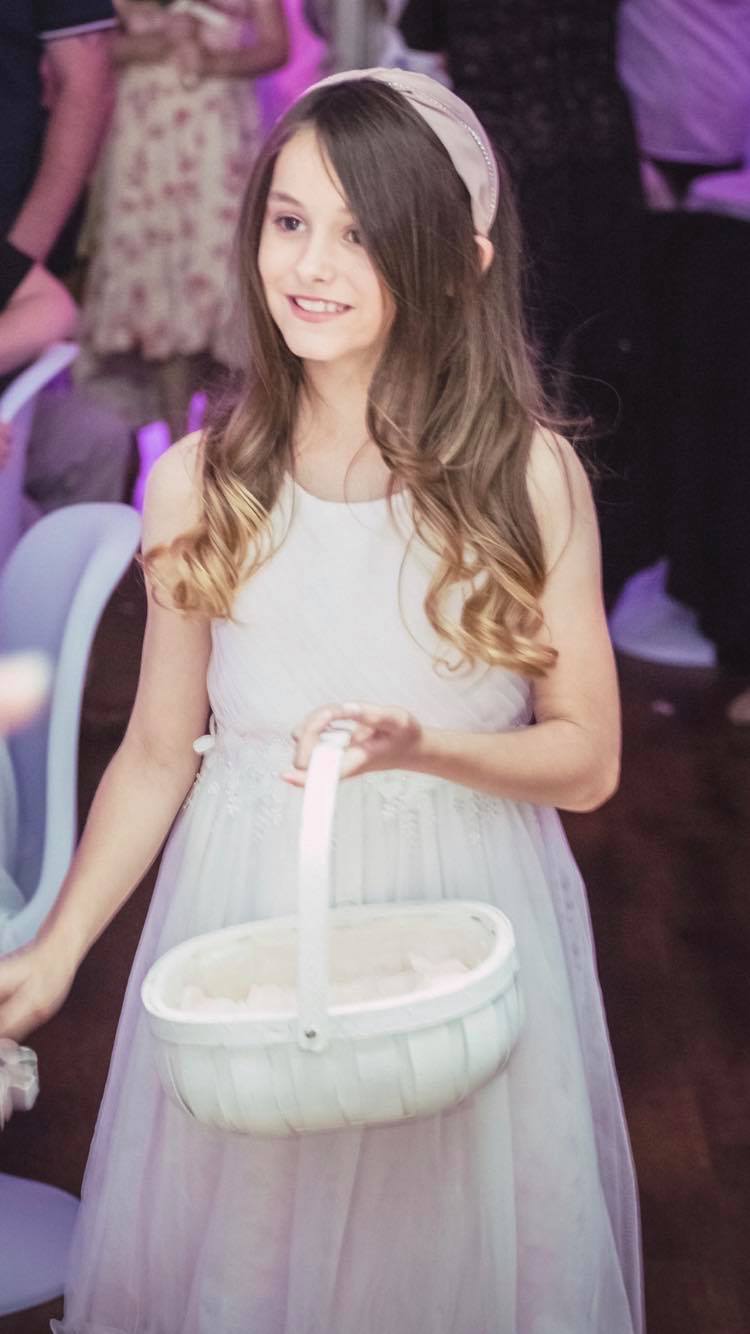 She said: "We all went on a search for the cheapest but prettiest dresses we could find, and managed to grab some from Topshop for £20 each!"

Joolz Stewart, 54, was the celebrant and wanted to give the ceremony to the couple for free, as her gift.

The sneaky couple surprised their family and friends by getting married at their engagement party on September 7.

The couple had struggled to set a date after Andy proposed last Christmas Day and had grown tired of relatives asking when they were going to get around to it, so they decided to host a surprise wedding.

After planning to throw an engagement party as a ruse, the pair set about organising their nuptials in secret.

Worried some guests may not show up, they came up with a way to lure them to their secret ceremony by including a small clue on the invites they sent out, which read: "At half eight there's a surprise guest!"

Salon owner Zoe said: "I never wanted to get married until I met Andy.

"He's such a character and when he came up with this idea I just shouted: 'Let's do it'."

Andy, a tiler, said: "I wouldn't have done it any other way.

"It solved all our problems and meant that we could enjoy our day without stressing about saving up for it, seating plans and who was or wasn't coming."

Cost of Andy and Zoe’s wedding

Food, £500 but prepared for no charge

Rental of extra flowers and table dressing at the venue, £20

Registrar at their local town hall, £200

They visited a registry office on September 5 and married officially in an intimate ceremony attended by just Zoe's mum Viv and Andy's mum, Anne Rose Lynch, 67, who were in on the surprise.

Then unsuspecting guests arrived at The Function Room in St Helens, Merseyside, expecting nothing but a buffet and a disco, but were stunned when Zoe and Andy – who have been together since July 2017 – got hitched.

Confused guests listened whilst Joolz explained she was a mental health social worker, before adding: "I'm not just a social worker – I'm also a marriage celebrant."

The penny finally dropped when the guests clocked the cheeky looks on Andy and Zoe's faces.

Viv said: "Everyone went mad. It was an amazing day. We managed to get everybody that Zoe and Andy love together in one room to celebrate the most important day of their lives."

Brooke and Zoe's son Jordy, six, who gave her away, had no idea about the ceremony – so rushed off to get into their glad-rags which the couple had organised for them.

"It was just the most magical day," Viv said. "Having everybody who loves them all in one room was so special.

"It wasn't like a normal wedding, when everybody has to be quiet and polite."

She continued: "We all had glow sticks and were dancing around. We had a ball."

Zoe said: "Andy and I were sitting on the sofa one night talking about our wedding, and I suggested going on holiday somewhere and doing it in secret.

"Both of our mums would have been livid if we did that, so Andy came up with this idea instead."

Andy said: "I used to think that if something wasn't broken, you shouldn't fix it.

"I didn't care about weddings, but when I met Zoe it was completely different. I wanted her to be my wife and I didn't care how we went about it."

Earlier we revealed that a bridezilla called off her wedding because her ‘selfish’ fiance refuses to pay for dental work.

Another woman was slammed for getting annoyed at her maid of honour for "stealing her thunder" by getting engaged before her wedding.