FOUR years ago Donna Corden's life changed when, after waking from a coma, she was met with the words: 'Your face is missing.'

She had fallen victim to the flesh-eating bug necrotising fasciitis after a minor cut became infected. 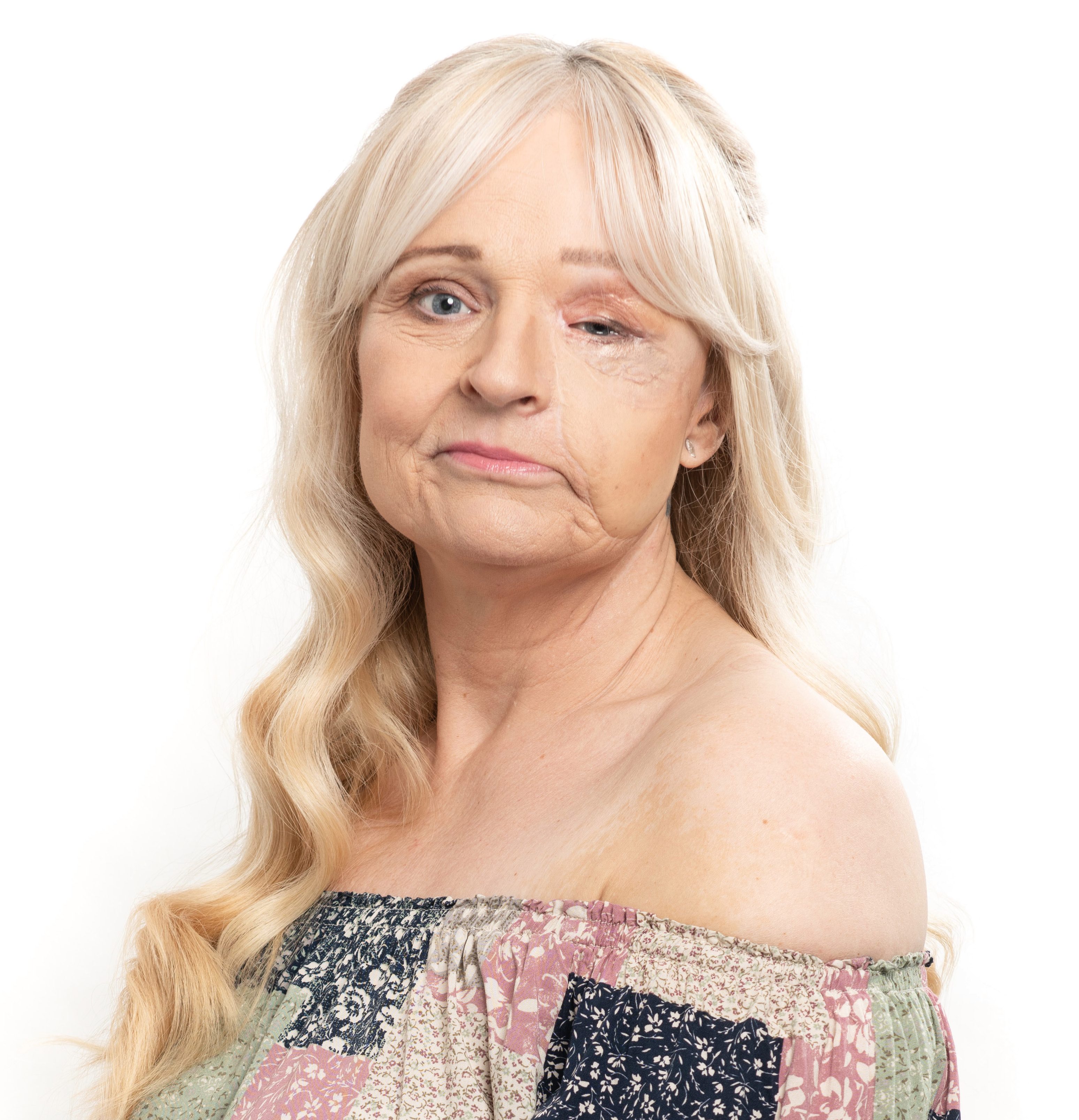 Now, after 10 operations, Donna says she is doing 'much better'.

'I've still got a long way to go but I'm thriving,' she said, although it hasn't been easy having been bullied in the street and diagnosed with post-traumatic stress disorder.

And she is even ready to date again, for the first time in six years. 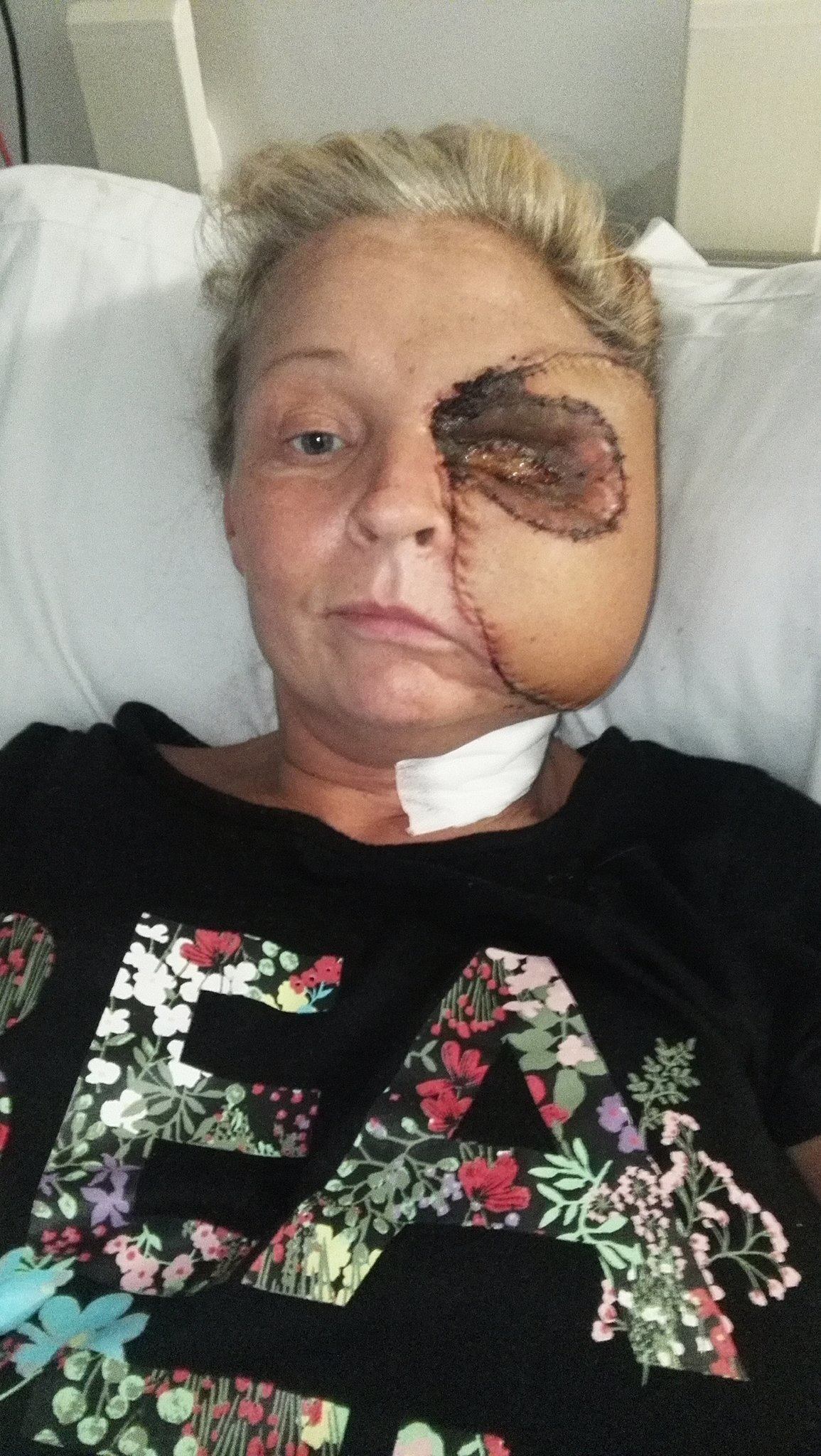 I didn’t think much of the small cut I suffered after slipping and hitting my head on the oven door in January 2017.

My son, David Lawton, now 27, found me knocked out on the kitchen floor after I bumped myself and just to be on the safe side took me to Leeds General Infirmary.

There, doctors cleaned up the cut, put strips over it and sent me on my way with a warning if I started to feel sick to come back in.

They were more worried about concussion than anything else.

The next day I did start to feel a bit queasy so lay down for a nap. I presumed it was a stomach bug and wasn’t concerned. 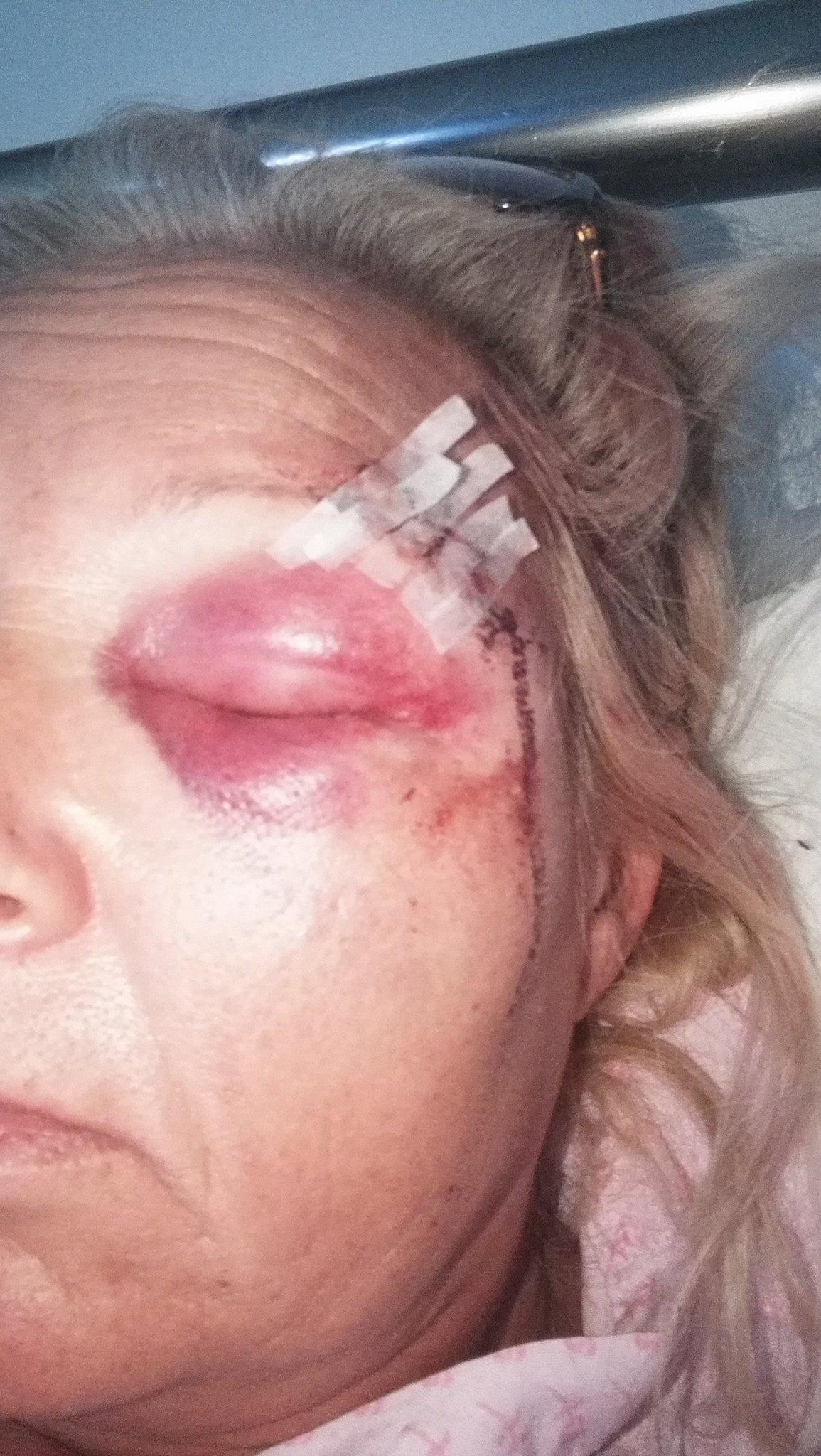 I can’t remember much after that but my daughter, Jayde Stammers, now 28, tells me she was horrified when she popped in to see me a few hours later.

I was delirious, vomiting constantly and couldn’t recall anything.

The scratch was blackening and I was obviously really, really ill.

Jayde called 999 and I was taken by ambulance to St James’ Hospital in Leeds where doctors were really concerned – but also confused.

Their first thought was a brain injury, but scans came back clear. The bump hadn’t been particularly severe.

Then, one relatively junior doctor, said she recognised my symptoms from a case she’d studied at medical school. 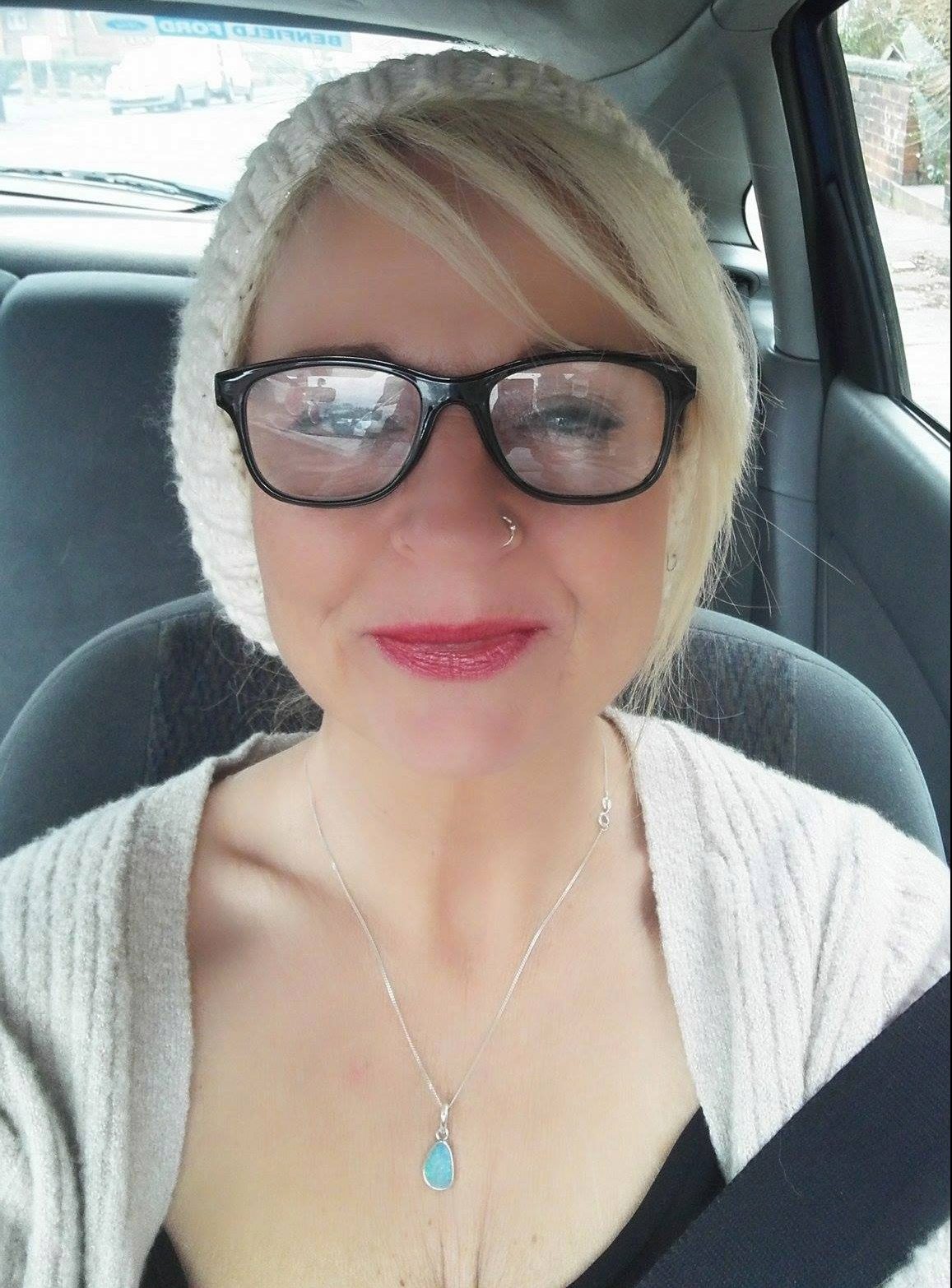 She said it sounded like I had necrotising fasciitis, also called NF or a flesh-eating bug, when a bacterial infection develops underneath the skin.

It’s so lucky she was there – and so on-the-ball – because she was right.

NF is incredibly rare, so I don’t blame doctors for not spotting it initially.

Of course, I didn’t know I was suffering from it at that stage. By this point I was delirious and couldn’t recognise anyone or anything.

Doctors had to cut out the infected skin which was rapidly spreading across my face. 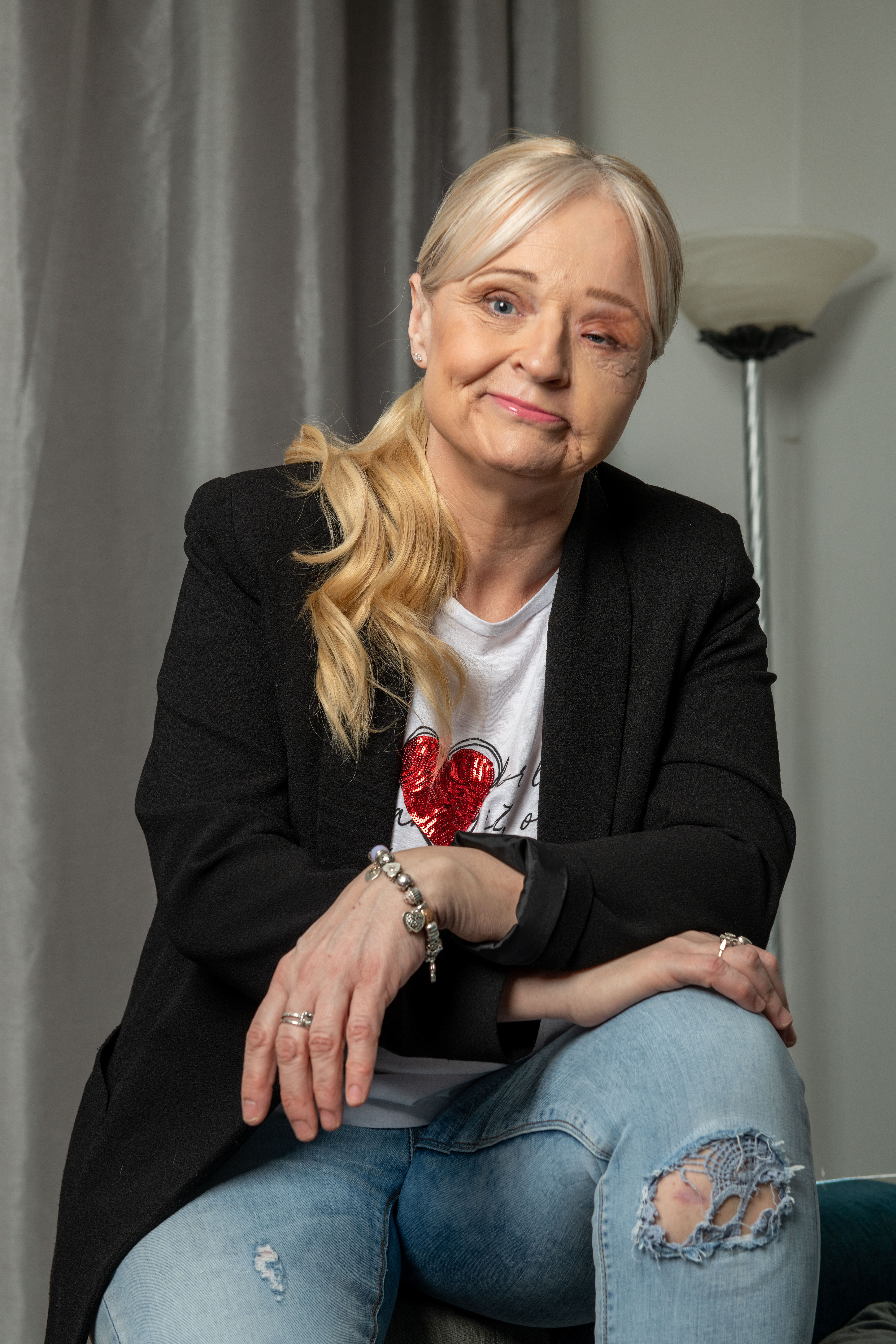 I was taken back to Leeds General Infirmary as they battled to save me.

"It’s a case of saving her life," they told her.

The surgery went well but afterwards I developed sepsis, when the body overreacts to an infection and starts fighting itself.

Then, I went into organ failure and so was placed in an induced coma and pumped full of antibiotics.

Sometimes I wake up and think, ‘did that really happen’. Then I catch a look at my face in the mirror… and I realise it did.

Gradually I was brought out of it and in February 2017 was allowed home.

But my confidence had been shattered and I was terrified to leave the house. I looked totally different with the left hand side of my face missing.

Still, with the support of my family I built up confidence to go out.

I remember the first time I went to collect my youngest Summer, now 13, from school a few months later. It was a massive achievement.

Everyone was really kind and Jayde actually wrote about it in her diary. She showed me her entry a few months later. "I am SO proud of mum," she said. 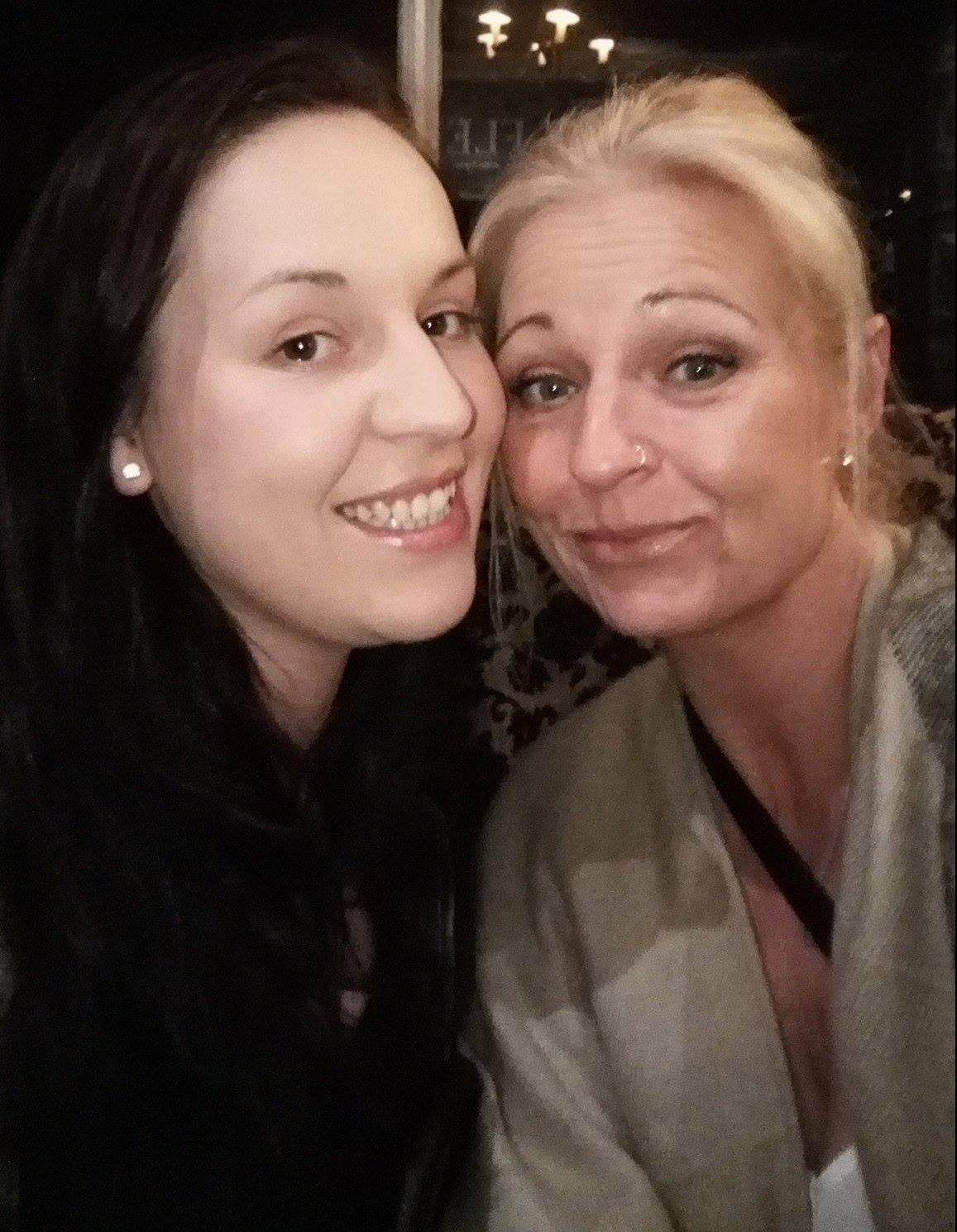 But that’s not always been the case.

I still won’t go out alone and hate busy places, which I was fine with before the illness, but recently braved a trip with a mate to Primark in Leeds City Centre.

I wept and fled the store as a group of teenage girls followed me around whispering "freak".

I have nightmares too. Sometimes I wake up and think, "did that really happen". Then I catch a look at my face in the mirror… and I realise it did.

But I am seeing a psychiatrist on the NHS as I realise, after what I’ve been through, I needed support.

But I am seeing a psychiatrist on the NHS as I realise, after what I’ve been through, I needed support. Who wouldn’t after waking up from a coma to the words, ‘Your face is missing’.

Who wouldn’t after waking up from a coma to the words, "Your face is missing".

She diagnosed me with post-traumatic stress disorder and talking about it – how close to death I came, the trauma, the impact on my children… everything – has really helped.

I’ve undergone 10 operations and they’ve been a mixed bag.

Skin from my thigh was grafted onto my face and one op was a bit botched. I couldn’t see – but they repaired it and now I am pleased with how things are.

I know I don’t look the same but I think I look good. 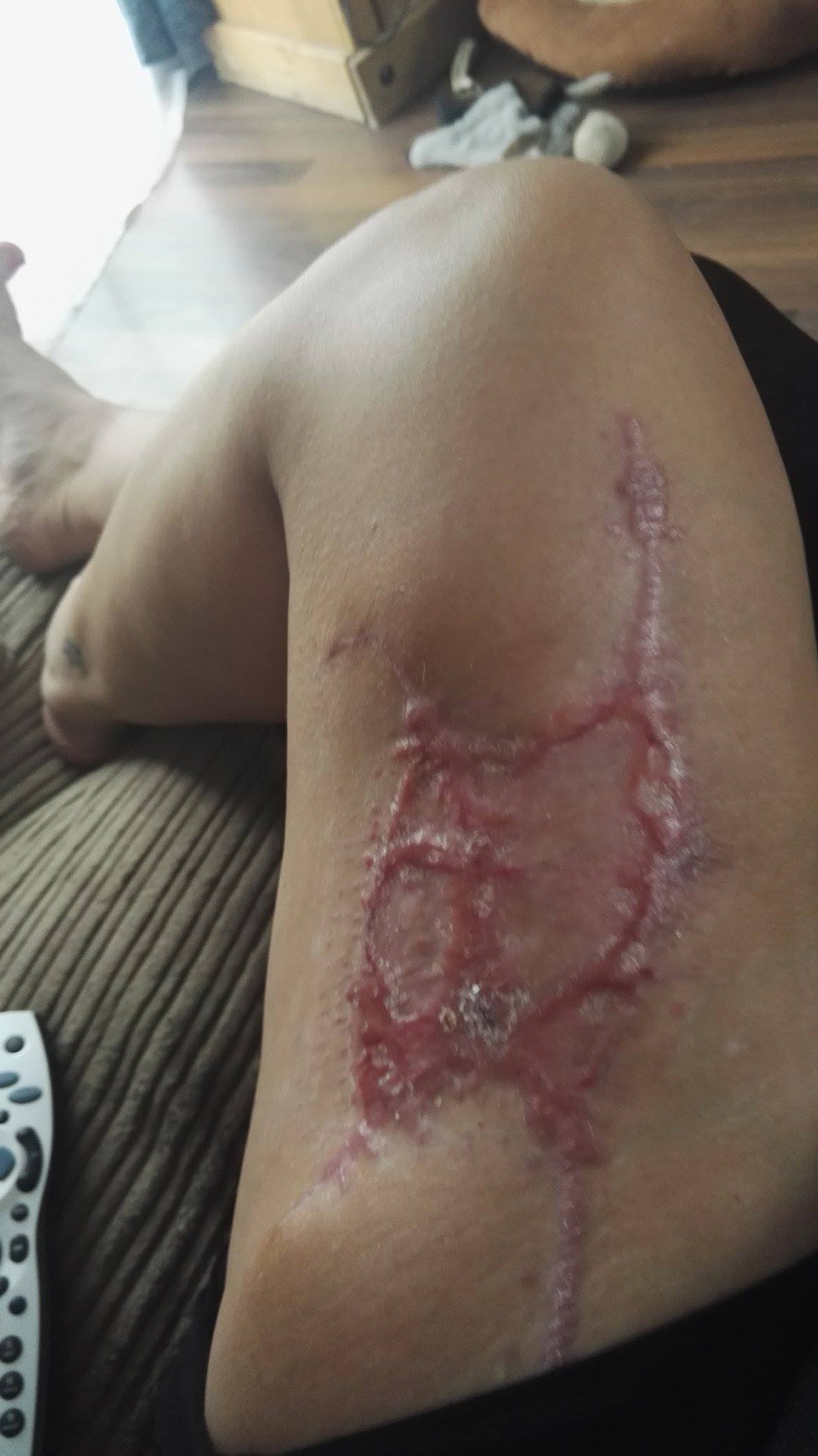 I’ve lost four stone too and changed my hair.

At Christmas I put on a trendy dress, straightened my hair, did my makeup and went out with a friend… I felt good sipping on a glass of fizz.

The next step is tattooing around my eye, to improve the skin's overall appearance.

However, there will still be many more procedures.

The surgeons and doctors at the hospital treat me like an old friend now. They all say, "Hi Donna, you okay?"

It’s nice. I really appreciate everything they have done.

But there is one thing missing from my life.

I separated from Summer’s dad, John Kedzierzki, 50, when she was young and sadly he’s since died from a heart attack.

It will be the first time I’ve dated in six years.

I know I come with baggage – but I believe the right man won’t care.

And I’m not holding anything back. I will be upfront about my appearance and if that is a problem they can bugger off.

After all I’ve been through, this won’t be my biggest challenge.

What is necrotising fasciitis?

NECROTISING fasciitis is a rare but serious bacterial infection that affects the tissue beneath the skin, the surrounding muscles and organs.

It's often referred to as a "flesh-eating" disease, though the bacteria don't eat the flesh.

Rather, they release toxins that damage the nearby tissue.

The condition can start from a relatively minor injury, such as a small cut, but can progress and get worse very quickly.

If it's not recognised quickly, the condition can become life-threatening.

Symptoms can develop quickly, and early signs include:

After a few days, it's likely you'll notice:

Necrotising fasciitis is a medical emergency that can spread very quickly. It is important if you suspect you are suffering with it, you dial 999 immediately.

In more real life news, a student's lip was bitten off in a horrific attack by her boyfriend.

And a woman bitten by a false widow spider developed an oozing hole in her armpit.

Celebrities
GMB: Katy Rickitt makes awkward World Cup blunderKaty Rickitt, 36, started her Tuesday morning the wrong way, as the Good...
Lifestyle
More On: flaming lips The Flaming Lips are still breathtakingly crazy Miley Cyrus offers her not-so-hot new album online for...
TV & Movies
Tyler Perry is using his personal experience with the COVID-19 vaccine to help raise awareness and open people's eyes. The...
World News
Countdown in Auckland's Orewa has been closed for deep cleaning after one of the two possible new Covid-19 community cases...
Beauty
If there’s anyone we trust to dish out skincare and beauty recommendations, it’s Kourtney Kardashian. Back in 2017, the eldest...
Fashion
Amanda Gorman was undoubtedly the breakout star of the 2021 inauguration. As a Harvard grad and the first Youth poet...
Recent Posts
We and our partners use cookies on this site to improve our service, perform analytics, personalize advertising, measure advertising performance, and remember website preferences.Ok