A MUM’S dating profile has gone viral after she openly admits she is looking to get married… while pregnant with her seventh child.

Her bizarre personal ad has been shared on Reddit, showcasing the woman’s display photo alongside her Tinder bio. 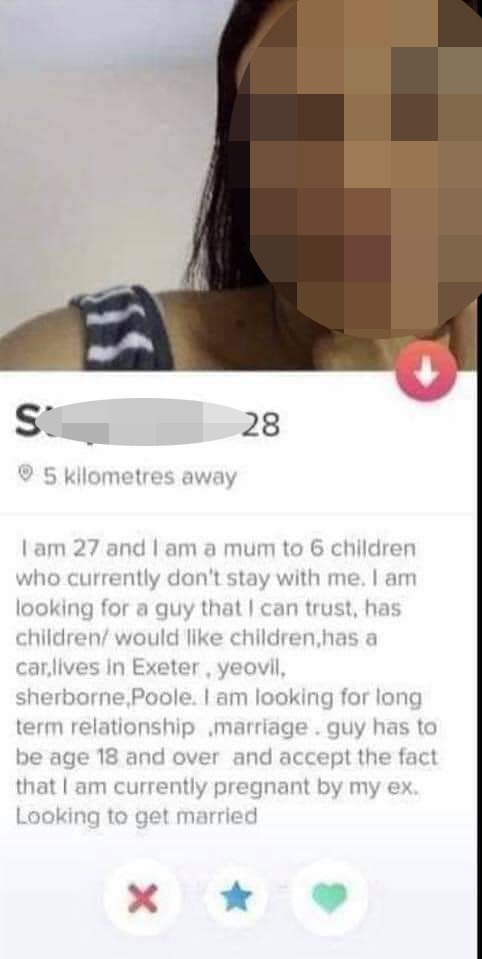 Her description reads: “I am 27 and a mum to 6 children who don’t currently stay with me.

“I am looking for a guy that I can trust, has children/ would like children, has a car lives in Exeter, Yeovil, Sherborne, Poole.

“I am looking for a long term relationship, marriage. Guy has to be 18 and over and accept the fact that I am currently pregnant by my ex.”

Finishing she reiterates: “Looking to get married.”

Fellow Redditors were baffled by the profile, sharing their thoughts in the comments.

One wrote: “Wowww this lady IS the red flag.”

“Damn, where to begin” added another, while a third wrote, “That's a haaaaard no…..”

However, others were quick to praise the woman’s honesty.

“If I may be at all positive about this, at least she was honest. That's something that is not too common these days” wrote another.

The group has over 2.3 million members and is described as a place for "trashy stories, trashy glamour, all things fake, plastic and downright trashy."

In other relationship news, this woman found out she had an STD and announced it on Snapchat so her exes would know.

And a woman reveals extreme lengths desperate bloke goes to after she blocked him – including changing his Netflix name.

Plus this woman pens scathing letter to ex who sent her a sex toy meant for his mistress.