When Sonal Patel’s dreams of what she called a “big fat Indian wedding” in April 2020 took a dive because of the coronavirus, she said she had a minor meltdown.

“Both our parents are immigrants who had saved up for this one event,” she said. “I was upset.” By fall, though, the Hindu priest she and her fiancé, Ankit Shah, had chosen to officiate found them a new auspicious date, Nov. 21. Mr. Shah, who had earned a reputation for rallying after a botched attempt at buying Ms. Patel an engagement ring in 2018, may deserve some of the credit for reviving her spirits.

Ms. Patel, 35, and Mr. Shah, 38, live in Arlington, Va., and work in information technology; Ms. Patel at KPMG, the accounting firm, and Mr. Shah at AcisTek, a technology services company. They met in December 2015, when Mr. Shah was visiting his brother, Dhaval Shah, in Manassas Park, Va., from his home in Minneapolis. Ms. Patel had been invited to Dhaval’s annual Christmas party. “We spent the whole night talking,” Mr. Shah said.

The next day, at a brunch for a dozen friends, Ms. Patel made an effort to keep the flirtation going. “But me being a Minnesota guy, I was avid about my sports teams. I spent the whole time in my Vikings jersey watching TV while she was sitting across from me, trying to talk.”

He hadn’t totally blown it, though. Both confided in their hosts, Dhaval and his wife, Mosmi, that there was chemistry between them. The next day they were invited to a more intimate dinner for six intended to spark a romance. It worked. “They left us alone in the living room for a while, and we talked again, and there was a really strong attraction,” he said. Once he flew back to Minnesota, though, keeping a long-distance relationship afloat seemed a tall task. “I was leery.”

A reunion the following August at a beach house in Kent Island, Md., where Dhaval and Mosmi Shah were staying, chased away that leeriness. “All those same feelings from before came back,” he said. Mr. Shah committed to ending the long-distance hurdle, moving in with his brother in April 2018.

“I made some sacrifices professionally, but I knew it would lead to what I ultimately wanted,” he said, which was to marry Ms. Patel. Progress in that direction was underway by the time he bought an engagement ring in September. The couple had moved in together and Mr. Shah was planning to propose during his brother’s annual Christmas party, the same one at which they met. But “I ruined it,” Ms. Patel said. 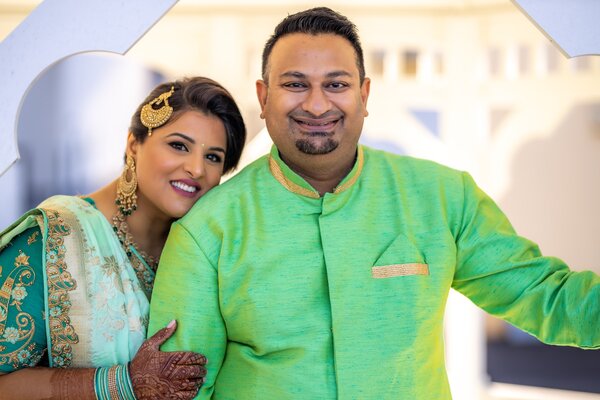 During a trip to the Pentagon City Mall to buy presents for their nieces and nephews, they wandered into a jewelry store. “It was some random one right near the escalator,” Ms. Patel said. As they browsed, she noticed a round-cut diamond engagement ring. “She said that’s the one she liked the least,” Mr. Shah said. “It was identical to the one I had picked out.”

A scramble to replace it with a princess cut diamond took shape, but he wasn’t able to secure one from his jeweler in time for his brother’s party. “So I had it sent to her parents’ house, which I knew was also a meaningful place for her,” he said. On Dec. 21, 2018, at the Patel home in Bellmawr, N.J., he proposed in front of her brother and parents; Ms. Patel said yes.

They were well into planning an April 2020 Hindu wedding ceremony in Princeton for more than 350, plus five other traditional events expected to draw hundreds, when the pandemic’s grip on the world started tightening. They postponed, but as New Jersey ramped up its coronavirus restrictions amid an uptick in cases, the scale of the events started dwindling, until they were left with just three: a pre-wedding ceremony for 60; the wedding, attended by 75 and performed by Hindu priest Ghanshayam Dave at the Regal Banquet Hall in Pennsauken Township, N.J; and a back yard reception for 30 at the Patel house. (To keep the three events as safe as possible, they provided masks and hand sanitizer at each and followed social distancing guidelines; at the pre-wedding ceremony, they made use of two indoor stages instead of one for extra spacing.)

“It was stressful watching my vision fall to pieces multiple times,” Ms. Patel said. “But in hindsight, we had a blast.”