A WOMAN has revealed how she turned her tiny cupboard into a home office after her job told her she’d be working-from-home until at least March 2021.

Paige Stevens, 22, from Reading in Berkshire said she was determined to ‘declutter’ the cupboard and completed the whole DIY project – turning it into an office – for a fiver.

The IT consultant said she was fed up with using the dining room as her office – due to Covid-19 – and wanted to have a dedicated space for her work.

She shared the makeover on Facebook, writing: ‘Recently transformed a cupboard into my own mini office due to working from home full time!

‘The cupboard didn’t have a light, but does have a plug socket, so used a £5 plug in pendant from IKEA. 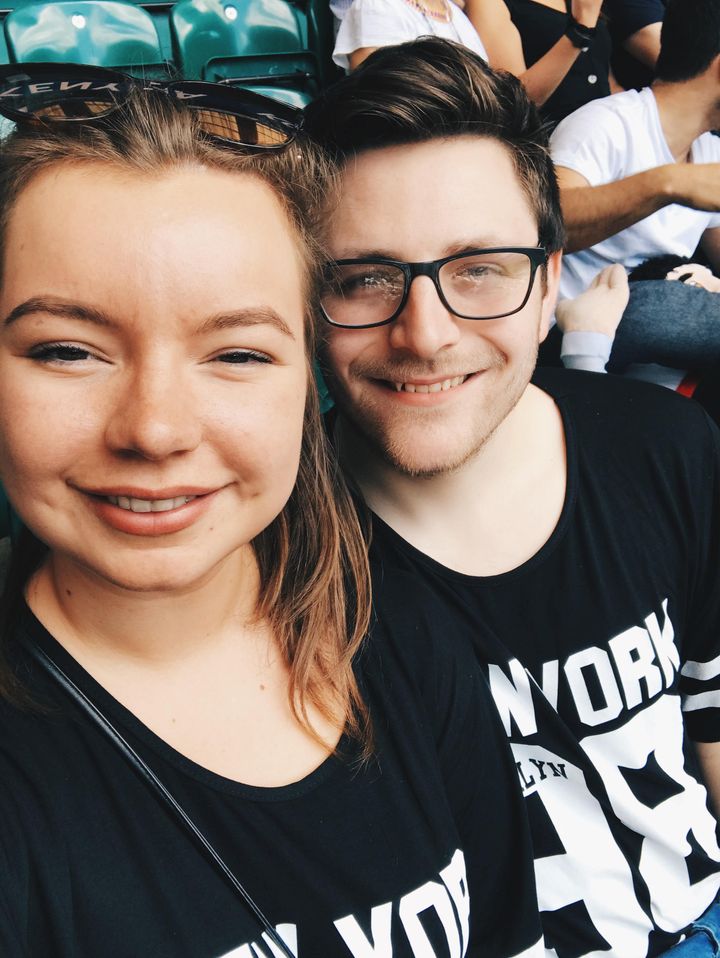 ‘Really happy with how it turned out & just need to touch up with some more white paint!

‘I never close the door whilst I’m in there for more than 10 mins (and only if it’s loud downstairs) & I can get in and out without having to take the chair out.’

The post instantly raked up thousands of likes and comments – however many strangers raised their concerns about how Paige gets in and out of the tiny room.

One user questioned: ‘Looks brilliant, but how do you get on the chair? Pull it out the cupboard, sit on it and shimmy back into the gap?x’

Another asked: ‘Please can you get someone to film you getting in and out, I’m very curious!’ 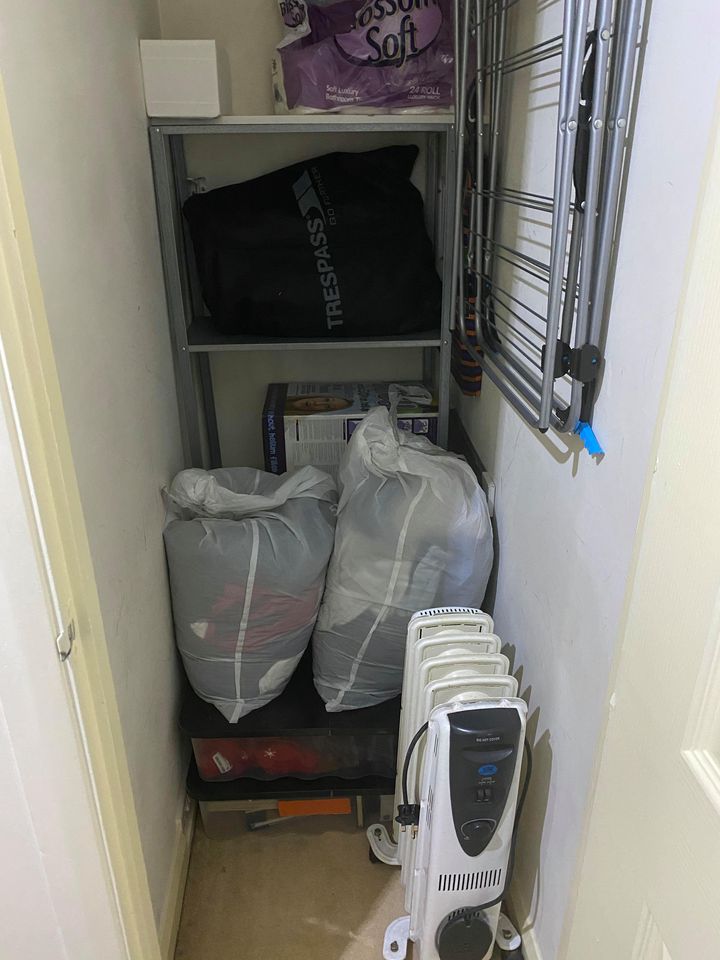 Paige said she completely ‘understands’ the comments – and realises the idea of the tiny space makes some people ‘feel claustrophobic’, but said she has a solution.

She said: ‘I either sit on the chair and lift my knees up and spin towards the desk, or I can squeeze past one leg at a time.

‘A lot of people have said that it made them feel claustrophobic which I completely understand, but I keep the door open when I’m in the room which helps.’

Paige lives in a one-bedroom house with her fiancé but due to COVID-19 – the couple have been working from home full-time.

Her fiancé has been using the desk area for work while she has resorted to the dining table to do her job.

After hearing that I’d probably be working from home until at least March 2021, I thought I should try and find a better solution!

The consultant admitted the set up was ‘ok’ but said she ‘hated’ seeing the clutter on the weekend and was desperate to get their old living space back.

She said: ‘I hated seeing the clutter on the weekends, and wanted our living space back.

‘After hearing that I’d probably be working from home until at least March 2021, I thought I should try and find a better solution!

‘The space before was used as a storage cupboard, and had stuff in there since we moved in.

‘I knew that the space had power, and was roughly 67cm wide and 1.5m deep. It was an organised mess, but was also housing items that we didn’t need anymore/hadn’t gotten around to donating.

‘I wanted to declutter our entire house, and decided that creating an office using that space would give me the push to actually do it.’ 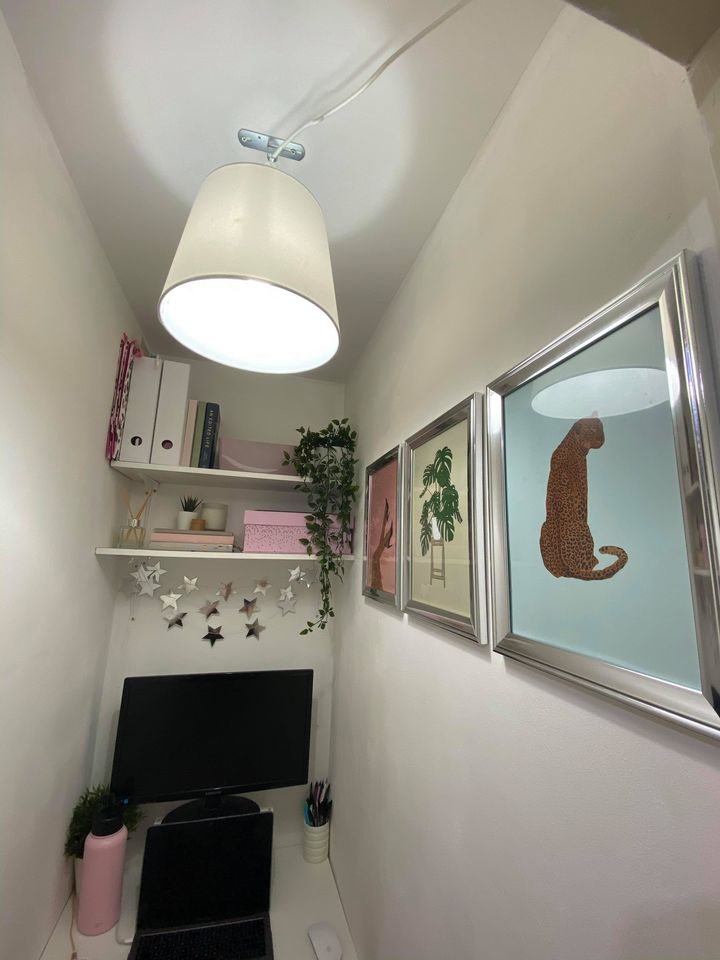 Paige believes she has saved herself a couple of hundred pounds by transforming the cupboard into a stylish mini office herself.

By trying her hand at the DIY project meant Paige didn’t have to pay out for a painter, carpenter and an electrician to give the cupboard a makeover.

She started the transformation by clearing out the cupboard, donating forgotten items and reorganising the tiny space.

She added: ‘I took down the shelves, and coat hanger before painting the walls in a brilliant white as well as the yellowed skirting boards a gloss white.

‘I drew a plan of what I wanted, sent to my stepdad, and then went to my parents house in Dorset, where he cut down a spare piece of wood for the desk with a hole in the corner for wires, and 3 batons for the wall supports.

‘My fiancé helped me drill the batons into the wall whilst I held in position, and he then drilled the hook into the ceiling for the light.

‘I set up my monitor to check the height, and then changed the height of the lower shelf to increase the space above the monitor so it felt less cramped.

Paige was gifted the chair and lampshade from her local ‘Buy Nothing’ group, and her friend, who owns start-up illustration business @nakeyart, gave her the funky prints.

She also decorated the space – adding some stylish faux plants from IKEA as well as the magazine files and daylight bulb.

The consultant completed the makeover by adding some other spare decor pieces she had lying around their home.

She said: ‘I wanted to keep the cost as low as possible because I was worried it would be too small and I’d hate it!

‘The wood, lampshade and chair were all free which helped reduce costs.

‘However the hardest parts of the transformation were definitely getting the wood piece to fit, and finding a chair which would fit within the office for free, but I was really lucky!

‘It didn’t take me that long to do, everything went up one evening, but I had to wait until I could get the wood cut, and it took 3 coats of paint.

‘So start to finish was a fortnight from when I got the idea.’

Paige admitted that when she asked her stepdad to cut the wood for her – her mum laughed and thought she was joking when she revealed her home office idea.

But Paige proudly admitted she is ‘so happy’ with the result and is thrilled she finally has a clear divide between work and home.

She described her mini home office as ‘bright and clean’ and despite being initially worried that the space would be’ too small’, Miss Stevens said she is pleasantly surprised.

She said: ‘I was worried it would be uncomfortably small, but it's actually fine. I spend most of my time focused on my screens anyway and it means I have no distractions!

‘I really wasn’t expecting this to blow up so big. A lot of people online have reached out to say they want to do the same, and asked how I get in and out.

‘I either sit on the chair and lift my knees up and spin towards the desk, or I can squeeze past one leg at a time.

‘Having my own space where I can focus and create a clear distinction from work and rest has really helped.

‘Both me and my fiancé have regular work calls, and whilst we use headsets, being in a different room certainly makes it easier!’

One wrote: ‘Looks amazing! I would love one of these. Unfortunately I’m too fat to fit!’

While another praised: ‘NOW that’s what you call DIY ON A BUDGET. Well done!’

A third added: ‘I love this but I think I’d feel claustrophobic. But it’s so pretty! And a good use of space! I love it.’

Meanwhile another user shared: ‘Pleeasseee come and do this for me! Looks flippin awesome!’

For more amazing home transformations, this thrifty mum used bunk beds to split her daughters’ room in two so they can both have some space & it’s an instant hit.

And this mum-to-be transformed her drab kitchen with Frenchic paint & B&Q bargains – and it looks amazing.

Plus this bloke used IKEA units to make incredible built-in bed and dressing table for his wife.