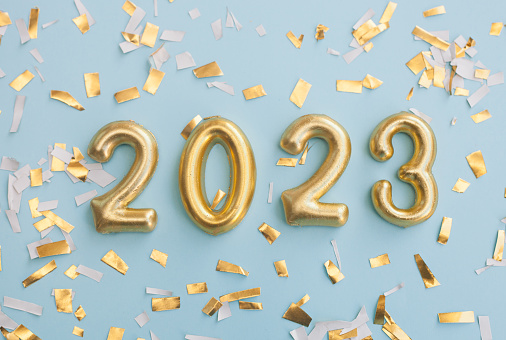 It’s been quite the rollercoaster in 2022, with a new King and a lot of Prime Ministers.

Not to mention the dissapointing World Cup result, the rocketing fuel bills, or Matt Hancock making it to the final of I’m A Celebrity.

But Glastonbury was back! And the Queen’s Platinum Jubilee got the country firmly in the party spirit.

Then the scorching summer gave way to an icy blast that had us hugging our hot water bottles. And Harry and Meghan released that documentary.

But even though 2022 was sometimes memorable for all the wrong reasons, there’s every reason to be positive about 2023.

Here’s our round-up of some of the top things to look forward to!

There’s nothing lovelier than seeing the streets of London filled with people having a great time.

And even though the Coronation of King Charles III, on Saturday, May 6, 2023, will be a ‘slimmed down’ affair, we can expect the famous gold coach and plenty of pomp and pageantry.

So the lads didn’t manage to bring it home, but now the Lionesses step up for the Women’s World Cup.

Matches start on July 20, 2023, and run for a month, at venues in Australia and New Zealand.

Their Euro 2022 win at Wembley was epic and there’s every reason to hope the Lionesses can lift that trophy.

We’ve had some corkers in 2022 – Top Gun Maverick saw Tom Cruise feel the need for speed, and Colin Farrell in the quirky, Oscar-tipped bad bromance The Banshees of Inisherin – but 2023 could easily top it.

Upcoming movies include Harrison Ford back for a final hurrah in Indiana Jones 5: The Dial Of Destiny, while the pink-tinged trailer depicting Margot Robbie and Ryan Gosling hooking up as Barbie and Ken is to die for.

Other big hitters incoming in 2023 are:

Plus what promises to be the wackiest movie of 2023: Cocaine Bear. It’s inspired by a true story of a bear who ingests a truckload of cocaine – and the trailer is quite something.

A New Doctor Who

Sonic screwdrivers at the ready! New Doctor Ncuti Gatwa takes over the Tardis and Russell T Davies is back as showrunner.

Plus David Tennant returns for the Doctor Who 60th anniversary specials, along with Catherine Tate as companion Donna. The special will air in November 2023, before Ncuti takes over during the festive season.

The trailer dropped on Christmas Day, straight after Strictly, and fans are literally ecstatic.

Thanks to our very own Space Man, Sam Ryder, finally breaking our wretched run and coming second to Ukraine, the UK will host the festival of fabulousness that is Eurovision.

It’s all happening in Liverpool, and tickets will go on sale for the semi-finals on May 9 and 11, and for the Grand Final on May 13. So whether you settle in for a night with Graham Norton on the telly or head to the city and party till dawn, Eurovision 2023 is sure to be douze points all round.

Oh, the speculation! Will it be Idris Elba? Tom Hardy? Henry Cavill? Whatever happened to all that talk about Tom Hiddleston? Could 007 be a woman?

After the dramatic end of No Time To Die, we know Bond is a gonner in his current form, so who will take over from Daniel Craig, and how?

Definitely something to look forward to.

Big Brother is back! Love it or hate it, after years in the wilderness, it’s launching on ITV2 in 2023.

Plus Bridgerton fans are in for a treat with prequel Queen Charlotte: A Bridgerton Story, and there’s season 4 of You, plus more Heartstopper.

Other top telly shows include drama series Stonehouse, starring Succession star Matthew MacFadyen as disgraced politician John Stonehouse, with Keeley Hawes as his wife. Who also happens to be his wife IRL. Oh, and Succession should be back with more scheming, too!

The Apprentice returns, along with fan favourites Call the Midwife and Death in Paradise. Oh, and The Crown picks up the story of Princess Diana’s Paris car crash and the fallout.

There’s also the return of Waterloo Road, crime series Happy Valley, and third seasons of both Ted Lasso, The Witcher and Race Across The World.

The return of Rihanna

Calling The Navy – Rihanna has confirmed she will headline the Super Bowl Halftime Show in 2023.

The Umbrella hitmaker, 34, announced her exciting return by simply sharing a photo of herself holding an American football upright on her Instagram feed, and there was no caption necessary.

Rihanna’s Super Bowl gig will be her first live performance in five years, as she last took to the stage with DJ Khaled and Bryson Tiller at the Grammy Awards in 2018.

Travel finally felt more ‘normal’ in 2022 and lots of us set off for the sun and snow, free from any restrictions.

So as 2023 dawns, there’s no better time to start planning where you want to go – whether it’s a trip close to home to one of Britain’s top spas or experiencing life in Senegal.

Jordan and Albania are also two hot destinations for 2023.

Whether it’s a special birthday, starting a new job or finally saying no to anything that’s negative in your life, marking and celebrating those milestones is sure to spark joy.

Looking for happiness in each moment – even if it’s just a good workout at the gym or a visit from a friend – is a terrific mood-booster.

Sometimes slowing down – slowmaxxing – is just what you need.