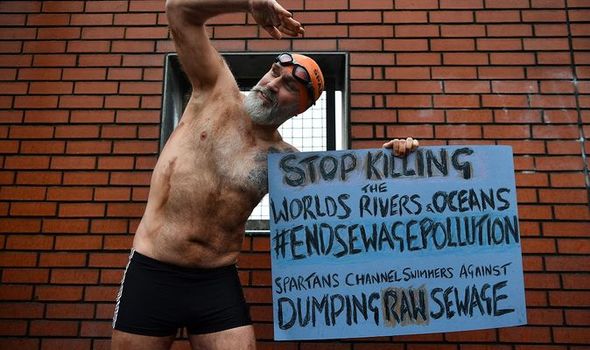 Shareholders received on average £2billion a year from 1991 to 2018, Greenwich University research showed. The GMB union too suggests that England’s nine private water firms pocketed more than £70million in salary, bonuses, pensions and other benefits in six years to 2019. The Daily Express Green Britain campaign has highlighted the scandal of sewage contaminating our rivers, backed by former Undertones singer and activist Feargal Sharkey, 63.

Cat Hobbs, of campaigners We Own It, said: “Water privatisation in England is a legalised scam. They rip us off and pollute the environment because their priority is to make a profit.” Last year storm overflows discharged untreated sewage and water in England for more than three million hours.

In July, Southern Water was fined a record £90million for dumping billions of litres of raw sewage into protected seas over several years. Last year, CEO Ian McAulay – who joined after the events which led to the fine – picked up a £550,900 bonus, making his total remuneration more than £1million.

But just 14 per cent of rivers have a good ecological standard and none is of good chemical quality. Charles Watson, of River Action UK, said: “Last year raw sewage was released on over 400,000 occasions.

“Polluters are highly unlikely to ever be fined or prosecuted. This is because the Environment Agency budget has been cut by 75 per cent in the last 10 years.”

“We need a step-change in culture and commitment from water companies, a focus on innovation and the greater use of nature-based solutions. While there has been progress, some companies are falling short in delivering a service customers expect and deserve, and must step up their performance.”

Southern Water said Mr McAulay joined in 2017 “with a mandate to transform the company in the wake of the poor practice between 2010 and 2015”.

A spokesman said: “Since 2010 we have invested some £7billion and dividends of less than £200million have been paid to shareholders. No dividend has been paid at all since 2016-17. Ian’s remuneration is one of the lowest in the sector. He has voluntarily frozen his pay for the last four years and receives no share incentives.”

Water UK, representing suppliers, said firms were “passionate about their role as custodians of our natural world”. But it added: “We need others to play their part. Collaboration is vital in ensuring we have healthy and clean rivers.”