Girl, nine, whose father is terminally ill with cancer shares emotional video asking for donations to help ‘keep her daddy for longer’ – after he was refused the treatment on the NHS

A young girl has made a heartfelt video appeal to raise funds for a miracle cancer drug that could almost double the life expectancy of her father.

In the emotional message, Eleanor Jameson, nine, from Northumberland, can be seen clutching her family’s pet dog in her arms before telling YouTube viewers:

‘My name is Eleanor, and I am nine-years-old, and this is my little doggie, Buddy. We’ve been doing lots of fundraising for my daddy, who has got cancer.

‘My daddy is really lovely and kind. Please help us to raise enough money on our GoFundMe page. Thank you.’

In a further video posted on her dad David’s GoFundme page since, Eleanor adds: ‘Thank you all so much for the donations…it means I get to keep my daddy for longer!’

David, 46, has multiple myeloma, a rare and incurable form of blood cancer that affects the bone marrow. He has been told without a new drug called Revlimlid it’s likely that he will die within three years. 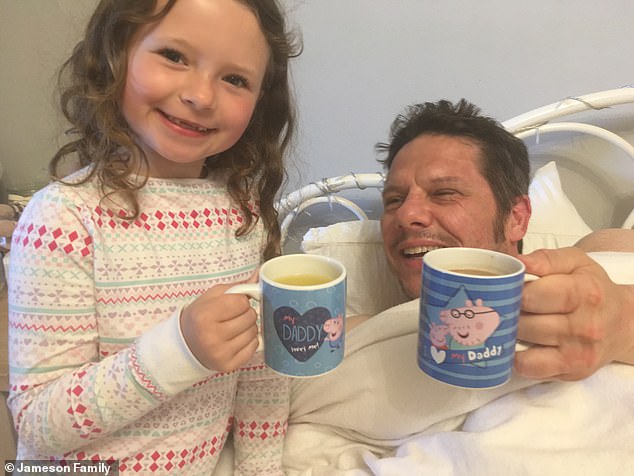 David, 46 (pictured with Eleanor), from Northumberland, was diagnosed with an aggressive and incurable form of cancer. According to doctors, he has three years to live if he doesn’t receive treatment

But even though doctors agree Revlimid will increase his life by at another two years or more, he has been refused the treatment on the NHS.

David, an IT worker, and his family, now face a race against time to raise £120,000 so that he can begin a two-year course of Revlimid at the Rutherford Cancer Centre in Northumberland.

For medical reasons, he must wait 100 days after a bone marrow operation on the NHS in October of this year before he can take the drug.

Eleanor and big sister Lori have been frantically organising fundraising events with their mum Janine. 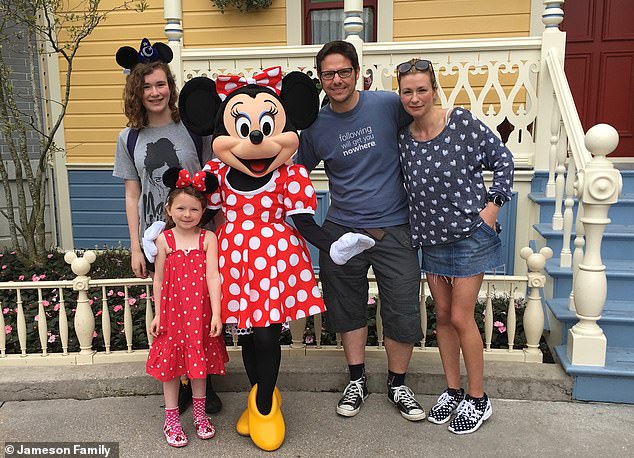 The family are making the most of every precious moment. Pictured, during a trip to Disneyland, from left to right, Lori, Eleanor, David and Janine 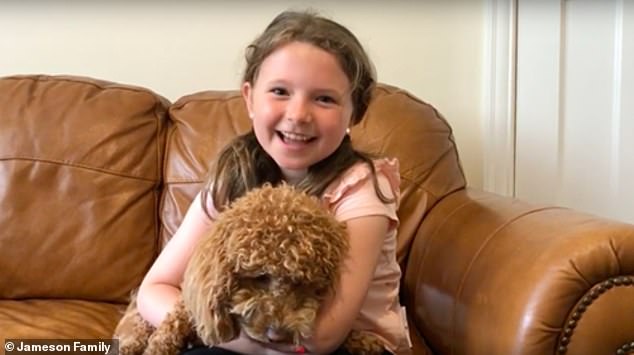 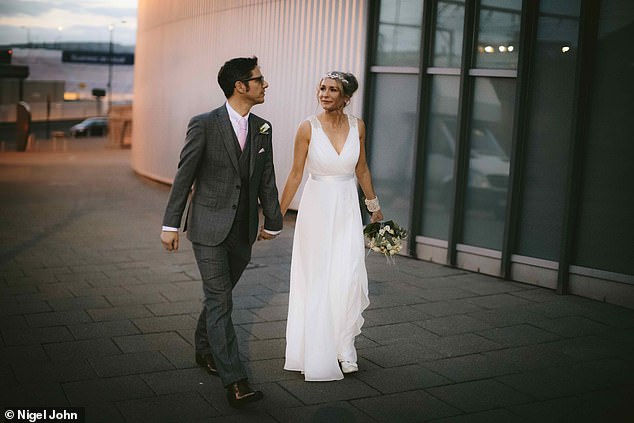 David was diagnosed with cancer two months after his wedding day to Janine. Pictured together

The girls have been baking cakes, making jewellery and organising pamper days for friends.

David was originally diagnosed last year with a tumour on his spine, which was curable.

Janine, who has been with David for ten years, proposed the same week and the couple were delighted when he was later given the all clear.

They enjoyed a dream wedding in February, but in a cruel twist of fate ten weeks later in April, David was told he is now suffering from a different, more aggressive form of cancer.

Myeloma is a rare form of cancer that affect 5,700 people in the UK each year.

It accounts for only two percent of cancers in the UK and mainly affects people over 60, but can be diagnosed in much younger cases.

This type of blood cancer arises from plasma cells, a type of cells made in the bone marrow.

Myeloma develops when something goes wrong with DNA during the development of a plasma cell. This abnormal cell then spreads into the bone marrow.

Unlike other cancers, myeloma doesn’t manifest in the form of a lump or tumour, it exists in the cells.

In adults, it can affect the bones of the spine, skull, pelvis, the rib cage, long bones of the arms and legs and the areas around the shoulders and hips.

Myeloma is treatable, and certain types of therapy can extend one’s life expectancy. However, it is currently incurable.

‘When the doctors told us that David has cancer for a second time, and that this time it is incurable, I had to leave the room because I thought I was going to be physically sick,’ explained Janine, a youth worker for a homeless charity. ‘It was such a huge blow after all we had been through.’

The family were told that Revlimid would improve David’s quality of life and life-expectancy, but a few days later were informed he cannot get the drug via the NHS because he doesn’t meet the correct criteria.

‘Nor can he access an on-going trial despite being a high-risk patient, because his type of cancer is so rare.

She continued: ‘We’re an ordinary working family and we have paid our taxes over the years, so even though we are grateful to the NHS for everything it is doing, I find it hard to understand why David can’t receive funding.’

‘We’ve seen other patients who have been given the drug on the NHS, which seems unfair.’ 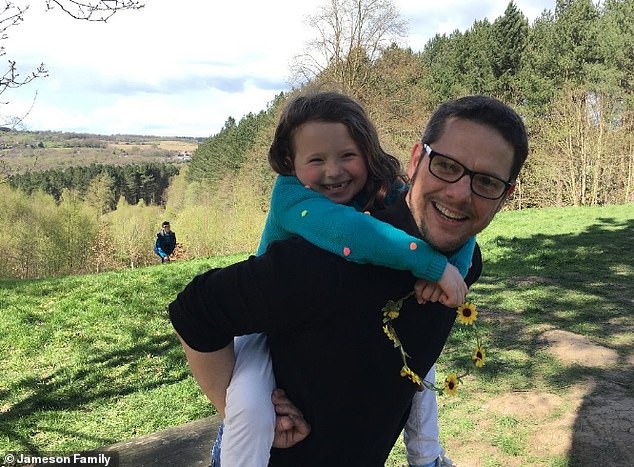 In the heartbreaking video, Eleanor explains that she wants to spend more time with her father. Pictured, enjoying a piggyback ride on dad David’s back 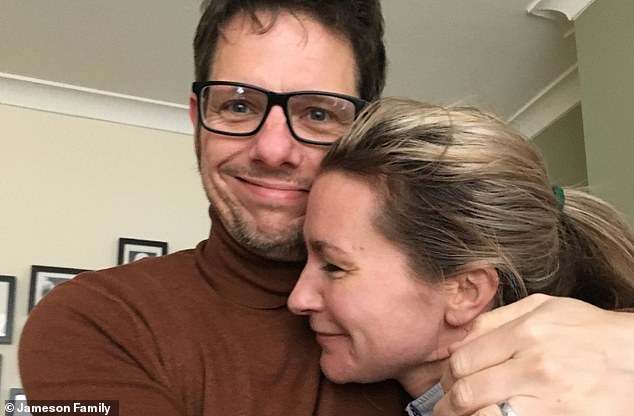 But Janine and David are determined to remain positive and together with their children, the family have shown remarkable resilience.

They have launched a social media campaign to promote awareness of David’s situation and have so far raised over £45,000 – although they still have a long way to go to reach their target.

Janine says that the treatment would significantly extend David’s life, which would enable him to continue to see more of the children as they grow up.

It may also help him to avoid being in a wheelchair due to the destruction caused to his bones by the cancer.

‘Every second that we have still have together as a family is precious,’ explained Janine. ‘David is still a young man and he is already doing well after beginning chemotherapy, so we know his cancer responds to treatment.’

She added: ‘We are determined to stay positive, and we are pleased that the doctors at the Rutherford Cancer Centre have said they can treat David.’

‘The children have been remarkable, they are so brave – David and I are both very proud of them.’ 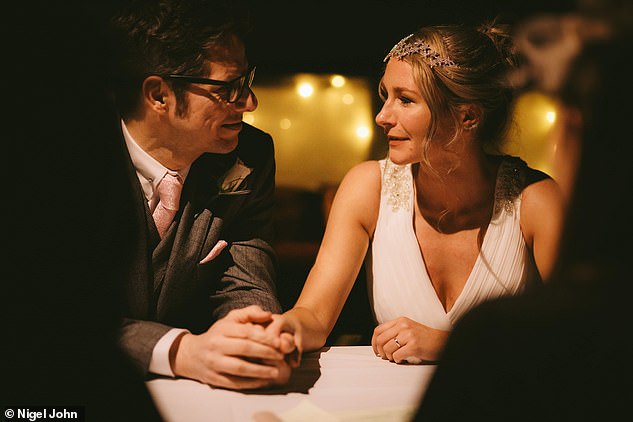 David and Janine are determined to remain positive and have shown remarkable resilience with their children. Pictured, together on their wedding day 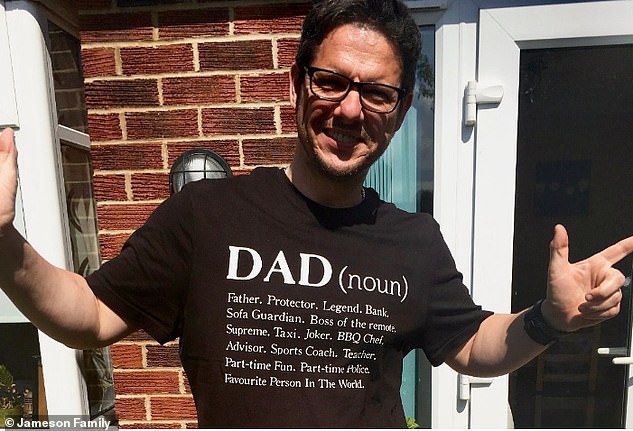 Janine said the treatment could extend David’s life so that he could see his children grow up. It could also prevent him from needing a wheelchair. Pictured, David wearing a ‘dad’ t-shirt