Rumaan Alam and I are mulling over the delights of tackling great novels in incongruous settings, the importance of context and how it affects your relationship with a book.

I offer Dickens’ fog-enveloped Bleak House on the Greek island of Naxos — a wonderful experience. He trumps that with the pleasures of devouring Buddenbrooks, Thomas Mann’s autobiographical family saga set in the chilly north German city of Lubeck, while on holiday in the heat of Hawaii. 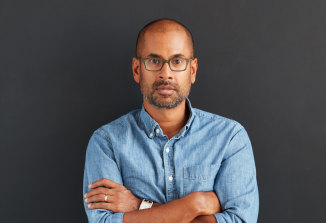 Rumaan Alam says he has more optimism about the generation of 15-18-year-old women than he does about the 80-year-olds who run this planet.Credit:David Land

“It was extraordinary,” he says. “I was reading it in paradise. I read 200 pages in one day on the beach. Perfect way to read anything, whether it’s Tom Clancy or Thomas Mann.”

Today it’s a sunny evening in New York and a cool morning in Melbourne, and Alam is relaxed and happy to talk via Zoom. The American writer is again on holiday, but this time at home in Brooklyn with his husband, David, and two sons, Simon and Xavier.

Given the success of his third novel, though, it’s a fair bet that many Americans heading off on their summer holidays will be packing Leave the World Behind to take with them as they try to do just that. But wherever they go and whatever the circumstances in which they read, it will prove unsettling.

Alam’s third novel begins when a white family, Clay and Amanda and their teenage children, Archie and Rosie, leave the city for an isolated Long Island rental home with a front yard “bound by a picket fence, white, not a trace of irony in it”.

On their second night, they are disturbed by a knock at the door. Outside is an African-American couple in their 60s, the Washingtons, who say they own the house: “Those people,” thinks Amanda, “didn’t look like the sort to own such a beautiful house. They might, though, clean it.”

The Washingtons end up staying and things move on from there. Leave the World Behind is a witty, atmospheric and compelling drama revolving around these strangers marooned in the woods and issues of race, class and climate change. It seems to change tack as you read.

“It seduces you into thinking it’s one thing, then shifts gears and seduces you to think it may be this other thing and then it shifts again and becomes this entirely different thing,” Alam says. “You think it’s a middle-class novel of manners, a race parody and it becomes this third thing.”

This third thing is disaster, but what sort is never spelled out. Just what is going on in the outside world? The picture of people negotiating a crisis they cannot comprehend makes the novel appear somehow prescient, although Alam wrote it before our pandemic.

The internet goes down, planes don’t seem to fly and bird song is stilled. There is a mysterious sonic blast, “horror, in some distilled way, in a single very brief moment”, animals and birds — a sizeable herd of deer, and a surprise flamboyance of pink flamingoes — behave oddly, and then there are Archie’s teeth … you’ll have to read it to find out about them.

But race remains a subtext even as it seems to disappear as an immediate concern, which is hardly surprising given the history of the US. The binary of black and white, Alam says, permeates the country’s cultural imagination.

“It’s on the very land you inhabit. There’s no evading it and the perspective held by many white Americans – probably many white Australians – that it is of no interest to them, that it does not implicate them, is the very thing that points out the extent that it does.”

His experience of racism has been minimal. He was born to Bangladeshi immigrants, “rational people, I couldn’t say I had difficulty” in Washington DC, but hopes he has given a more nuanced idea of the ramifications of racism in his country than simple suffering on one hand and liberty on the other.

As a father of two boys, he can relate to Amanda’s wary response as natural protectiveness, but points out that “every cultural product in this country is calculated to teach white women, white men, everybody to fear black masculinity above all else. So [her racism] it’s like a natural response.”

When we discuss her character, we move on to the question of how one views fictional characters. How important is “likeability”? What, really, does that have to do with anything?

“There is a kind of conversation that has crept into reading in this culture, a desire to rank fictionalised people by their likeability,” he says. “I don’t know anyone who is likeable. I am really hard-pressed to think of someone who is just likeable and that’s the sum total of their existence. People are complicated and strange. Terrible people may hold the same opinions as you. People you love may hold terrible political opinions. We should have a fiction that reflects that.”

He clearly worries about fiction and how it is perceived. He has described his earlier novels, That Kind of Mother and Rich and Pretty, both narrated from the point of white women, as autobiographical. It’s because “you’re always hostage to your perspective, your sense of the world, and no way to verify that anyone else shares that”.

As writer Patricia Lockwood put it in The London Review of Books: “No force on earth will keep a writer’s preoccupations out of their fiction. You are not necessarily looking for them, but you find them every time.”

Alam laments what he calls a kind of shallow contemporary morality that prompts fiction writers to write more explicity about themselves because it feels unimpeachable. “It’s a politically charged moment in which turning the gaze inwards allows you to escape the kind of boneheaded censure that seems increasingly prevalent in the culture.”

On a holiday a few years ago, Alam and family stayed in a house not dissimilar to the one in Leave the World Behind. He decided to use it in fiction. He was struggling with another novel but on his way to work as an editor at The New York Times, he created a new Twitter account – he loves Twitter – and forged the ideas sentence by sentence for Leave the World Behind.

He eventually left the job and at the end of 2018 took himself off to a hotel for six days to start writing properly. In that time, he produced 120 pages and went on to finish the complete first draft in three weeks. But, he points out, “the relationship between draft and book is like seed and watermelon”.

He had the ending in mind when he settled into that hotel. Partly it came from his worries as a parent and observing his two sons and their friends –“It was a hell of a thing,” he has Clay think, “to not be able to keep your kid safe. Was this how everyone felt? Was this, finally, what it was to be a human?” – and partly it reflected his political frustrations as he completed the book.

“Looking at Trump and Boris Johnson and Greta Thunberg, it was very clear to me where the imagination lies and the potential lies. It’s not really a political allegory but certainly I have much more optimism for the generation of 15-18-year-old women than I do about the 80-year-olds who actually run this planet.“

He is horrified by what he sees as the contemporary dissonance between information and knowledge, between fact and belief: “So much of our political conversation seems to be designed to be inclusive of a perspective that has utterly disdained objective truth for so long. What kind of conversation can you have with someone who says ‘oh vaccines cause autism’ or ‘Bill Gates is controlling our minds’? Whatever outlandish things people say becomes acceptable political perspective.”

It comes as no surprise that the book has been snapped up by Netflix. Alam loves that Denzel Washington is to star alongside Julia Roberts, because in the novel Amanda tells George Washington that he looks like Denzel Washington. “What could be more absurd or crazy to think that something I hatched as a joke to myself would take on this other dimension a few months on. He’s an incredible performer, someone I’ve been looking at my entire life. It’s mind-boggling.”

There’s a delicious moment early on in the novel before the Washingtons arrive when Amanda nips out to the shop to stock up on essential groceries. The way Alam lists what she buys and her commentary on those goods serve to skewer the type of people she and Clay are. It reminded me of the lists of must-have labels that run through Bret Easton Ellis’ savage satire of yuppie culture, American Pyscho.

When I put that to him, Alam pauses for a moment: “That’s so funny. I hadn’t thought about that. That is such a terribly misunderstood book in the contemporary moment. So much of that stuff is so funny in American Psycho. That makes me happy. I don’t know if we valourise fiction that attempts to function as an anthropology of the current moment. I think we like it to sit a little bit, which is why I am not sure we have seen a great book, a great novel about 9/11.”

So Alam wouldn’t admit to having written an anthropology of the COVID-19 moment, but the unease engendered by Leave the World Behind certainly reflects what we are all going through.

Rumaan Alam appears at Melbourne Writers Festival’s digital program, which starts on September 6 (mwf.com.au). Leave the World Behind is published by Bloomsbury at $19.99.

A weekly read for book lovers from Jason Steger. Sign up now.