It’s tempting to say justice was done this year with Peter Wegner’s portrait of the 100-year-old artist, Guy Warren, taking out the 100th Archibald, but it was a virtual inevitability. Had the Trustees of the Art Gallery of NSW decided to do something daring and different they may have been lynched by an angry mob of journalists outraged that their fairytale story had been snitched.

After two laps of the Archibald last week I couldn’t see how anything else would even come close, and thankfully, there were no surprises in store. Wegner’s portrait was not only a sentimental favourite, it is pretty clearly the best in the show. There may be more ambitious and adventurous paintings this year but Wegner reminds us how important it is to get the fundamentals right. A good portrait is a working likeness, a great portrait gives us an insight into the heart and soul of the subject. The rest is mere distraction. 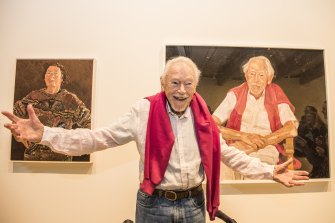 Given the AGNSW’s growing obsession with race and gender, it may be a long time before another white male wins a prize. The awards announcement was filled with cheerful boasts about how many women and how many Indigenous artists were represented in this year’s exhibitions. Alas, this was largely an act of self-congratulation, as the trustees themselves are responsible for the numbers allotted to any particular demographic. One only hopes they made their choices according to merit and totted up the stats afterwards. In an ideal world the crucial factor should be the quality of a work, not the gender or ethnicity of the artist. The perception of a cloud of political correctness obscuring the trustees’ vision is a constant talking point among artists. I only hope perceptions are misleading.

The special added attraction in the Archibald’s 100th anniversary year is the historical exhibition, Archie 100, which brings together a fascinating selection of entries from 1921 to the present. About a third of the featured works were winners but it’s more exciting to look at the paintings that didn’t win. It shouldn’t come as a shock that a lot of highly original pictures were passed over in favour of another man in a suit. It’s also clear that many artists were simply unlucky in finding themselves up against formidable opposition. One year earlier or later and they might have emerged victorious.

As the AGNSW has had 100 years to think about this survey it’s extremely disappointing there is no catalogue. Not only does a show of such historical interest merit a decent publication, I’m convinced it would have made a profit. So while the trustees may feel all warm and cosy about their newfound inclusiveness they need not be proud of the slackness and stinginess that robs an important exhibition of an after-life in bookstores and library shelves. It’s all very well to launch a PR blitz about the fabulous history of the Archibald Prize but history is a garden that needs to be constantly tended.