An 18-year-old student has revealed how she films herself sneezing and sells the videos to fetishists across the world to cover her university living costs.

The fine arts student, told MailOnline she started charging customers for the videos in order to pay of her expensive school, as she needed ‘a safety net.’

Her price can jump to £100 when the video request is specific – asking her to include her feet, talk or film in public. 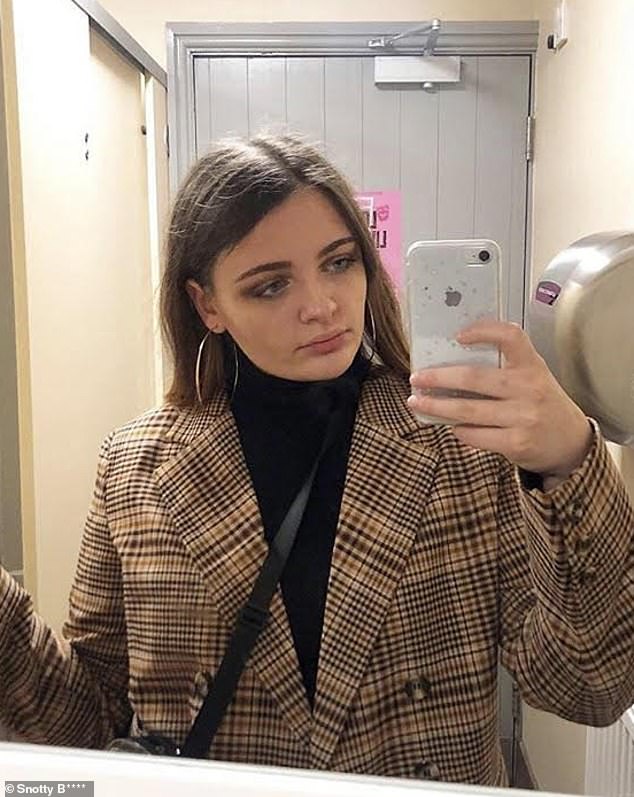 Abi Haywood, 18, (pictured) from Leeds, sells videos of herself sneezing to strangers in order to fund her art school tuition 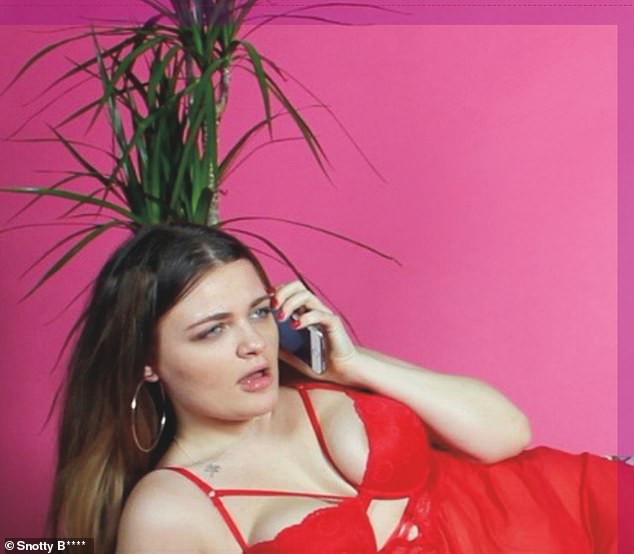 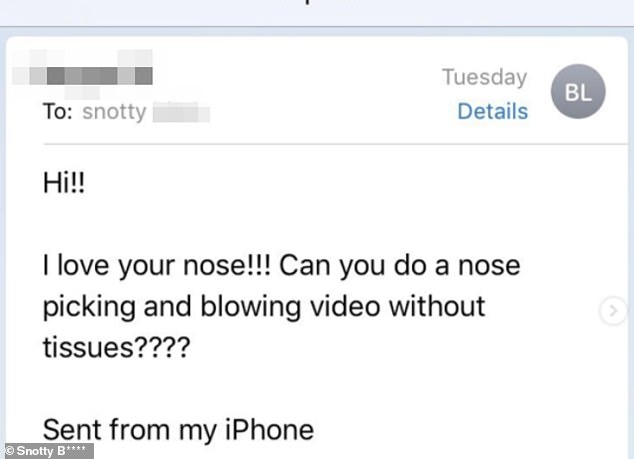 Another of the requests Snotty received. Request can be priced up to £100 according to the young woman

One of Abi’s customers once asked her to paint her toenails white and bought her nail varnish to that effect.

Others are attracted to the thrill of public sneezing. ‘I had a request where this guy wanted me to sneeze and go to the toilet in a public bathroom because of the privacy, echo and the clinicalness where people would be unaware,’ she said.

She honoured the request at the Henry Moore Institute in Leeds in exchange for a £100 Urban Outfitters voucher.

‘Ideally [the buyer] would send me money over PayPal but because he was a first time buyer and didn’t want his bank information showing or maybe he has a wife and he doesn’t want her seeing or buying material from fetish models,’ she explained. 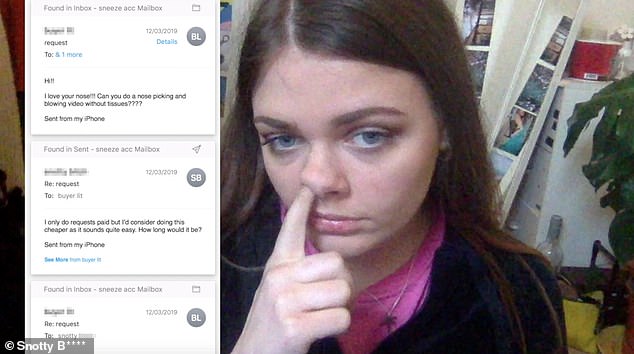 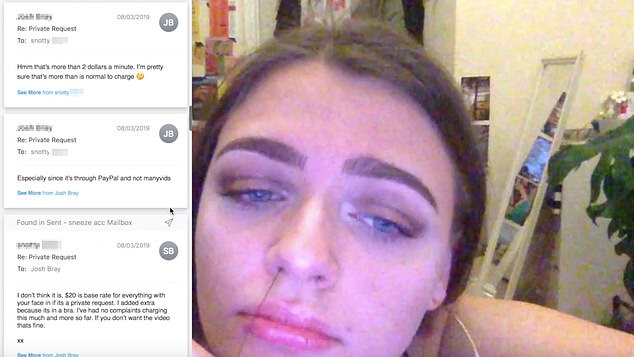 Another screenshot from one of Abi’s videos, accompanied by an exchange on pricing she had with a fan 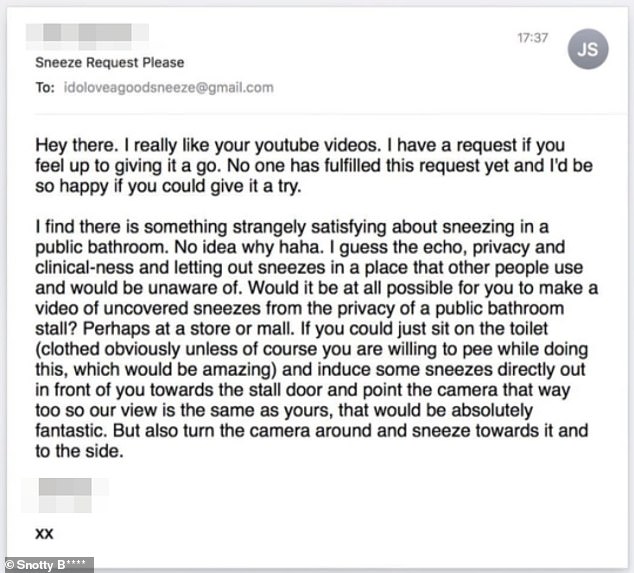 One of the requests received by Abi as her fetish model persona. In this email, the customer is asking her to sneeze in a public bathroom

‘So I did this at The Henry Moore Institute for £100.’  She picked this institution in particular to spite them, as she knew they would hate the concept.

Abi said she found the art world quite elitist and inaccessible to people of modest financial background, which was also what motivated to film her video at the institute.

She said the set up felt like pornography as she ‘sauntered around the gallery, pretending to look at pictures’. 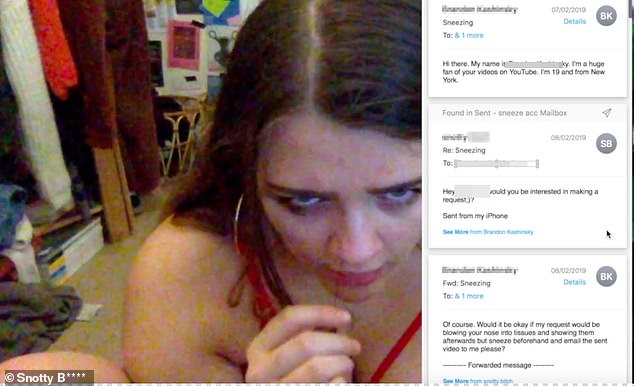 Some of her fans contact her in order to make a special request. Abi said without her side-business, she would not be able to afford her studies

Another man has told the young woman that he ‘watches [her] on [his] 72-inch TV in surround sound.

Some of the men have other fetishes so their interest in Abi is ‘almost an extension of dominating and submission,’ she said. One of them said he doesn’t find anything else attractive.

Abi can churn out 11 sneezes in five minutes, with the help of her pointed clothing tag and allergy to bright lights. And she said she has only ever had two nosebleeds. 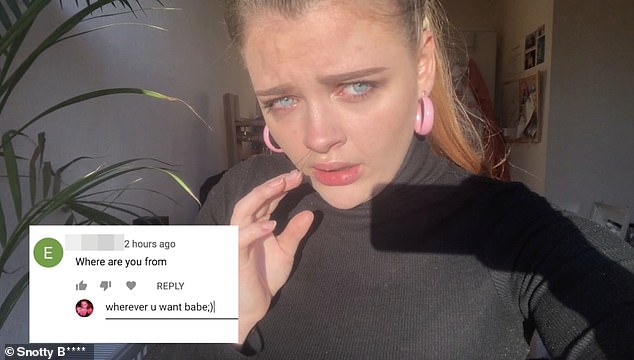 Pictured: One of the comments on one of Abi’s sneezing videos. She received multiple emails from fans complimenting her on her nose and requesting custom-made videos

It all started when Abi created a piece called ‘drawing of the form, endurance and repetition’ where she sneezed 37 times in three hours and drew an outline in pen.

After filming the work and putting it on YouTube as evidence, she received 3,000 views and was asked for the full version.

Abi realised she could make money from ‘performing’ and making sneezing clips. She called herself ‘snotty b****’ after one of the men’s comments.

She would have dropped out of Leeds art school without the cash because her waitressing job at the Hepworth Gallery pays minimum wage.

The fine art student said: ‘I am trying to manufacture my own sex toy for the nose, using materials which are traditionally used for sex toys, and to play with the sexual reception of what I’m doing. 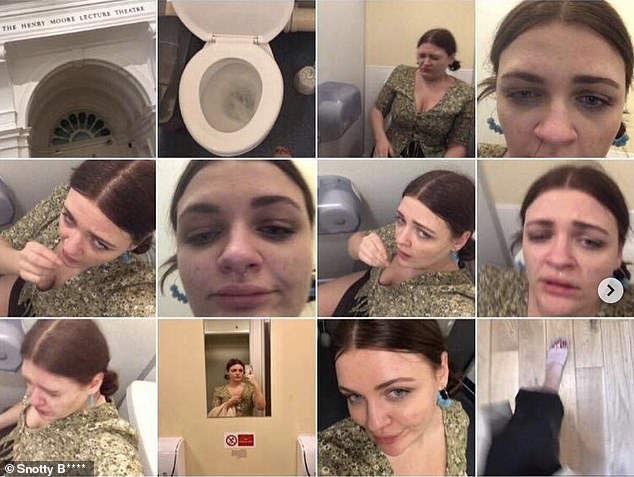 Screenshots from a video Abi filmed in a public bathroom at the Henry Moore lecture theater in Leeds. In the video the young woman sits on a bathroom stall and sneezes away

Abi said her side business had stemmed from a financial necessity: ‘Making the videos is kind of like having a safety net that I wouldn’t have had.’

She said that the demands of attending a reputable art school meant she had to dabble with the world of fetishes.

‘It’s stupid [the university] expect you to manage the city without a loan. Most people live in halls without a loan so it’s already a really rich demographic.# 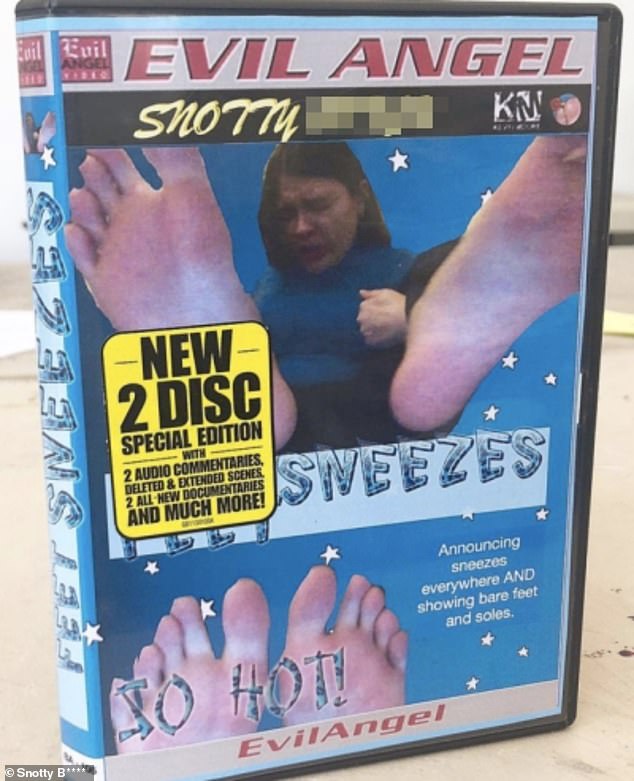 DVD compilations of Abi are available to buy. They’re called ‘Feet Sneezes’ and ‘Getting Hot ‘Snotty’ 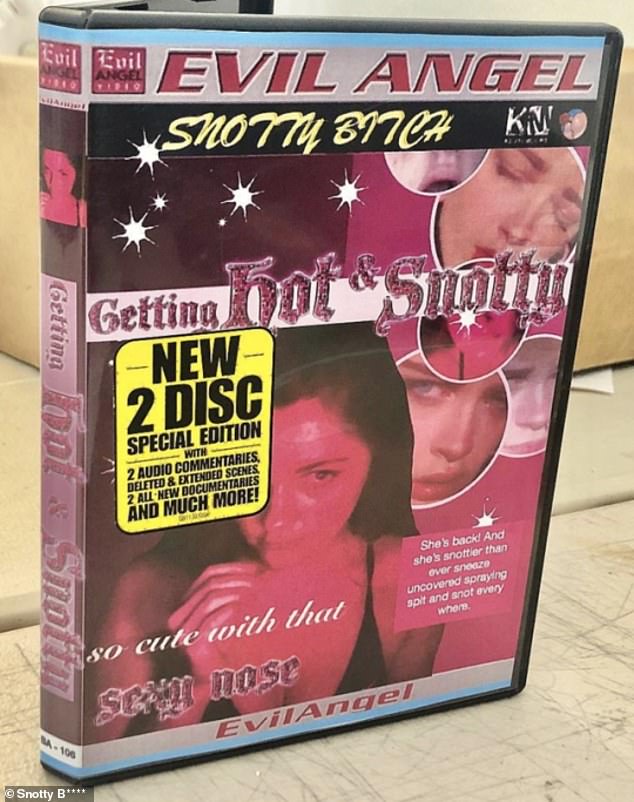 Abi’s prowess have made her a star in the fetish world, and her own DVDs are available for sale (pictured)

‘You can only really get into those top schools if you went into private school. It’s quite ridiculous they just expect you to fund it.

Abi used to live with her grand-father in Wakefield while studying for her art foundation.

She revealed how he gave her £20 from her child tax credit so she could buy food.

Abi explained she didn’t want to ask her mother for money because it would put her out for the week or create more credit card debt.

‘Once [my mum] grew to understand the ideas behind the videos, she was a fan. Selling these videos is very lucrative and more flexible.’