A mother has revealed how the first symptom of her infant daughter’s blood cancer was a seemingly normal runny nose and cold.

‘Mia had just started nursery and she was suffering from a runny nose, was very blocked up and had a feverish temperature,’ Anjna, a headhunter, told NeedToKnow.online.

‘When I look back during that period, she was particularly cranky. She cried a lot and took so much settling. 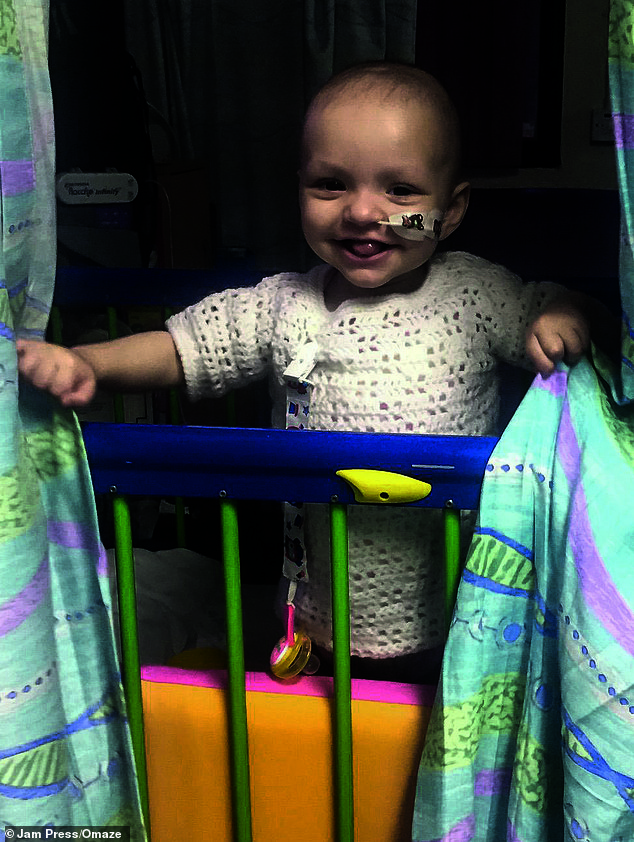 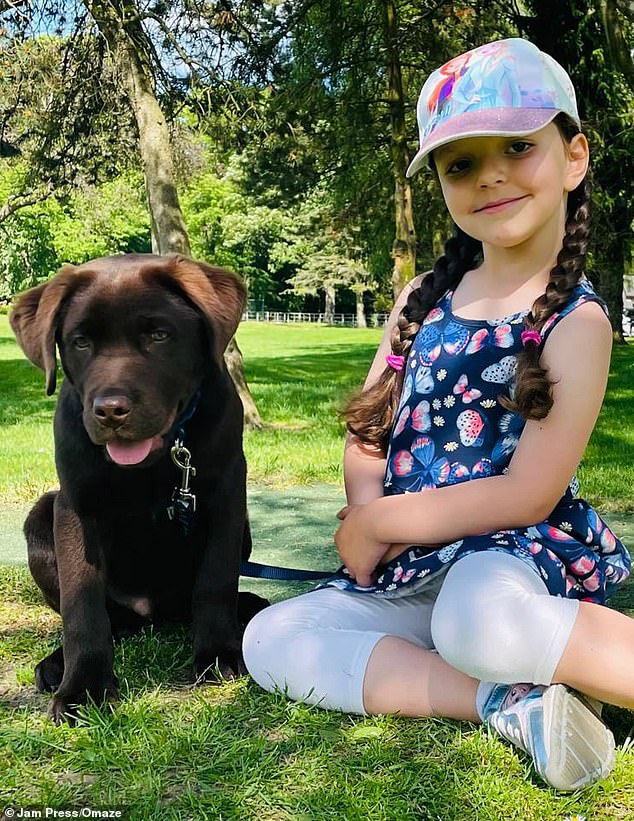 The toddler, pictured here after recovering from the disease, underwent a nine-month treatment plan including chemotherapy and blood transfusions among other procedures 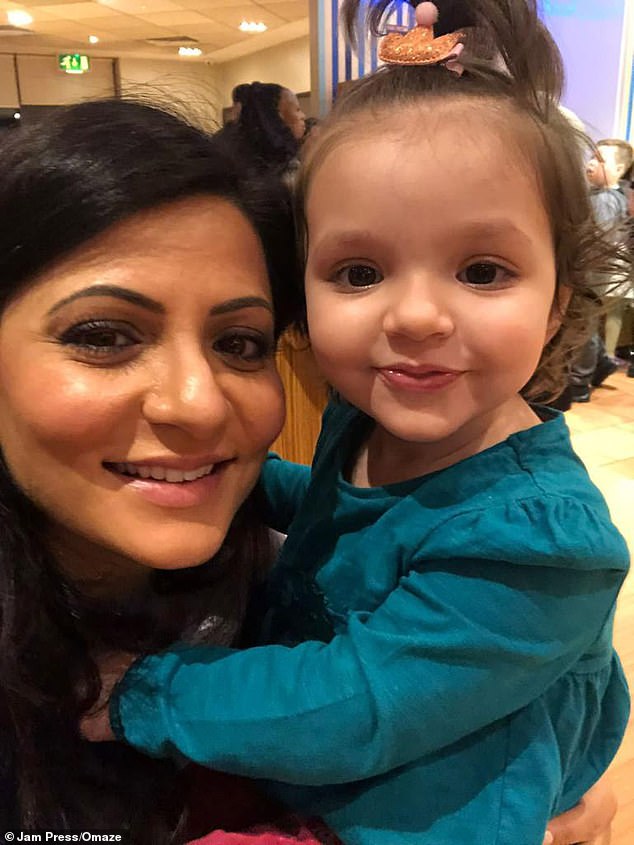 Anjna Caulton, pictured here with her daughter Mia, says she was unsettled by her daughter’s initial symptoms, but was assured they were due to the tot starting nursery

‘I was very unsettled by her cold-like symptoms and how tearful she was, but everyone assured me it was because she had started nursery and was building her immune system.

‘Little did I know it was in fact her immune system in serious trouble.

‘I then noticed a significant lump on her right side, by her ribs, but she wasn’t sitting yet so we wondered if it was an animal sting.

‘Within days I noticed quite a lot of bruising on her legs and arms which really panicked me.

‘I wondered if I was really stressed and I was holding her too hard whilst changing her nappy, or whether these were from her nursery. Hundreds of terrible thoughts were going through my mind.’ 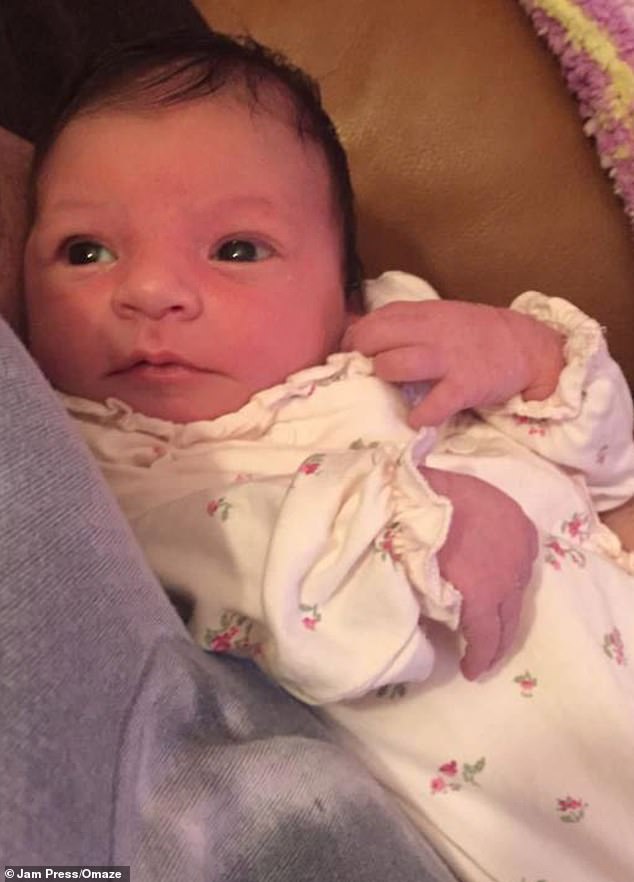 When Mia (pictured here as a baby) started showing bruises on her body, Anjna said she worried about how she had sustained them 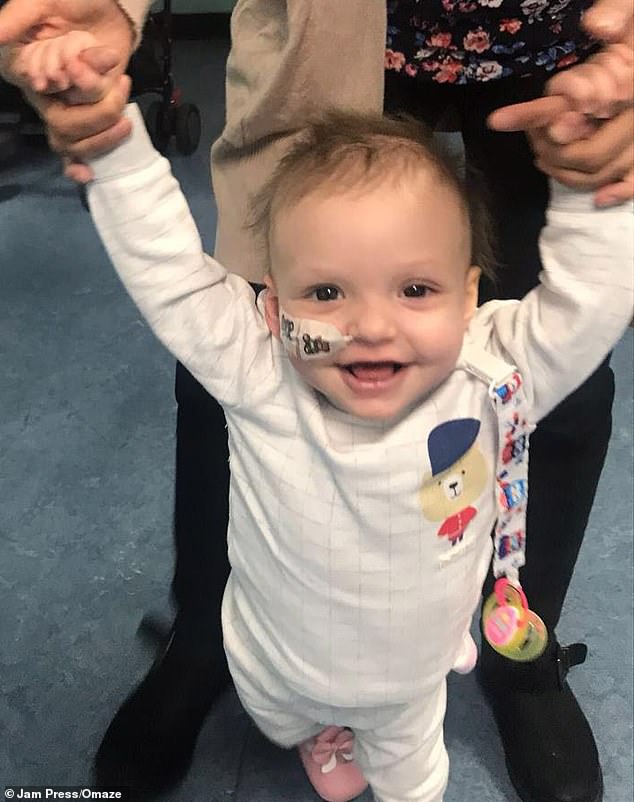 Mia had three visits to the GP before she was referred to hospital to take several tests, which revealed her diagnosis. Pictured, the infant during her treatment 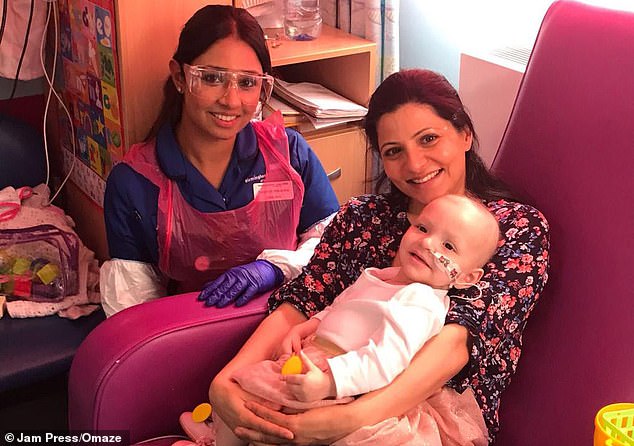 Mia had to stay at Birmingham Children’s Hospital for nine months while receiving treatment for her condition, including lumbar punctures, bone marrow operations, blood transfusions and chemotherapy

She and husband Simon, 49, took the tot to the doctor, who found her blood platelet level was very low – which was causing the bruising.

Anjna said: ‘Mia was very pale and these bruises followed with little red dots appearing sporadically over her body.

‘It was at this point after the third GP visit, she was referred to hospital who immediately took us into isolation.’

Mia underwent several tests and within two weeks of first visiting the doctor, she was diagnosed with infantile acute lymphoblastic leukaemia – a rare blood cancer.

She stayed at Birmingham Children’s Hospital for nine months to receive a gruelling cycle of treatments, including lumbar punctures, bone marrow operations, blood transfusions and chemotherapy.

Anjna said: ‘It was the scariest and most uncertain time of my life. 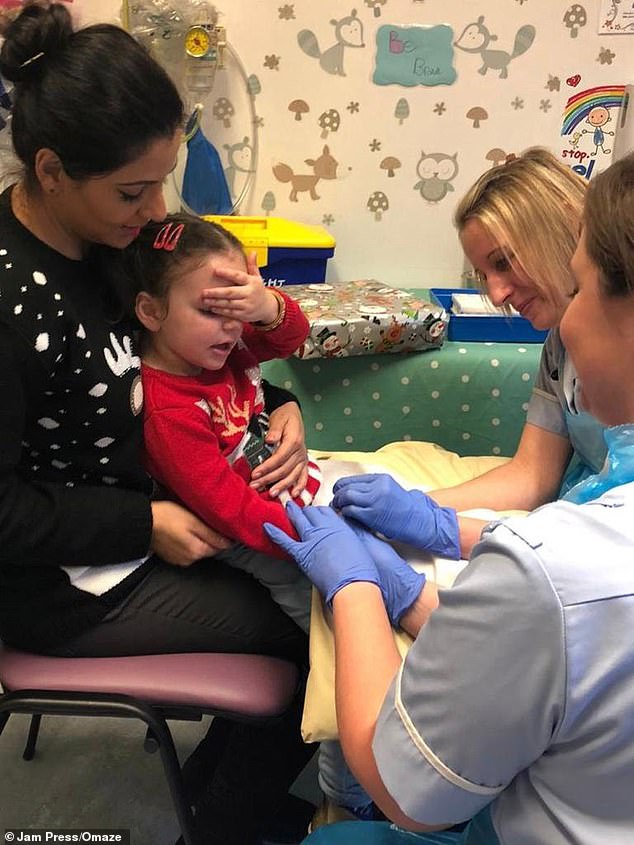 Baby Mia, pictured here while being treated for cancer, hit a number of milestones during the treatment, including taking her first steps, her first birthday, her first words, Christmas and New Year 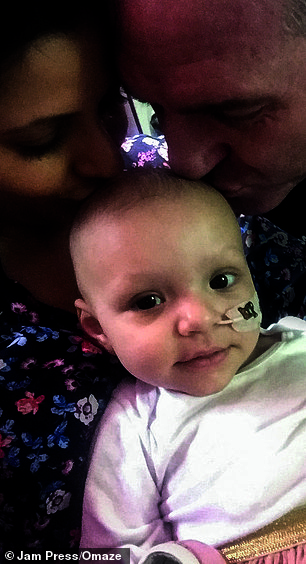 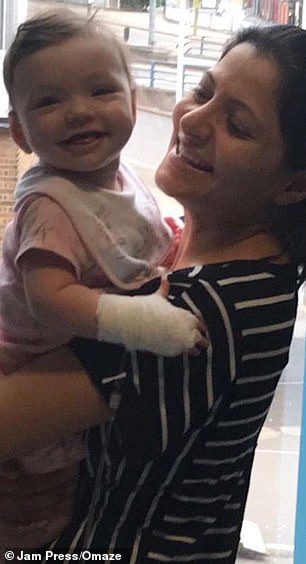 Anjna says the family got through the very difficult time while Mia was being treated for cancer by ‘taking one step at a time, one day at a time’ (pictured during the treatment)

‘I looked at this little face, my little girl whom I already love more than anything in the world and wondered whether she would get taken from me. It’s the most unbelievable pain.

‘Every parent brings their child into the world, with the expectation they will outlive you, this diagnosis completely threw out this natural order to life.

‘It was a life-changing period, as parents we left our day jobs to help Mia through her recovery. As a family, we learned quickly to adjust to our new life.

‘We wanted to surround Mia with as much positivity as possible, so on her good days, we still went for walks around the ward in her baby walker.

‘She hit some incredible milestones all during treatment, such as taking her first steps, her first birthday, her first words, Christmas and New Year.

‘Staying very present, taking one step at a time, one day at a time, we got through and took our baby home.’

After a further 18 months of recovery treatments involving daily trips to the hospital, Mia finally got the all-clear in March 2020, just before lockdown. 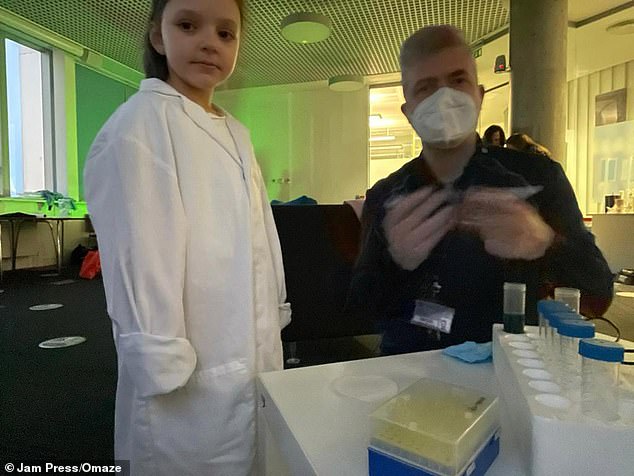 Mia (pictured after her treatment, with her dad Simon) had to visit hospital every day for 18 months for recovery treatments after her nine-month stay 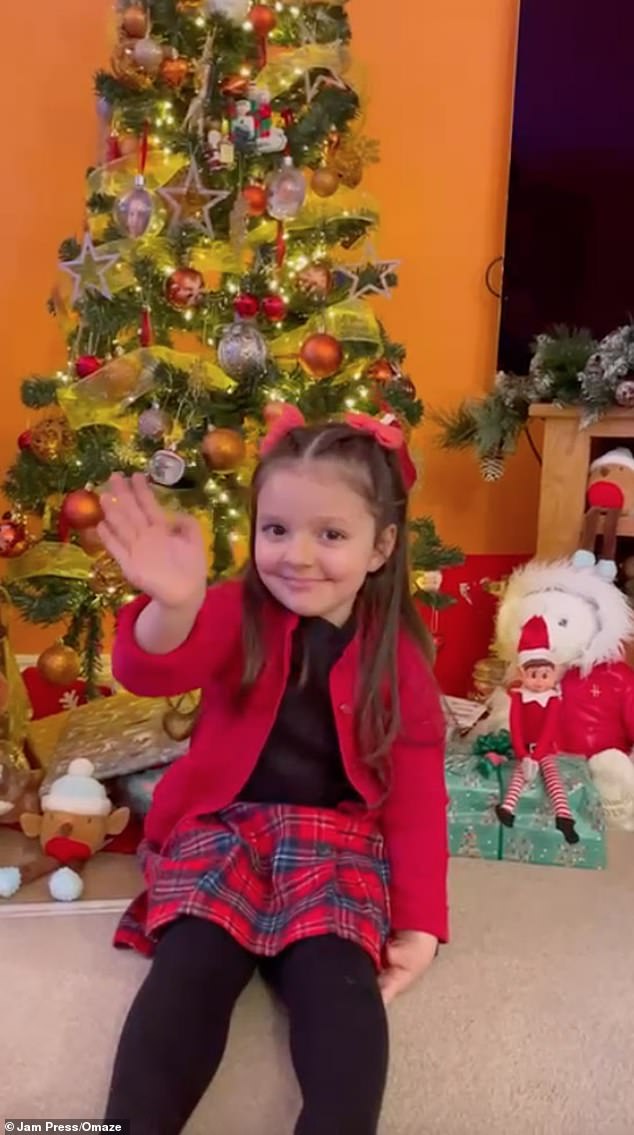 Overall, Mia’s treatment ran from July 2017 until March 2020, with the little girl spending huge amounts of time in hospital over that time 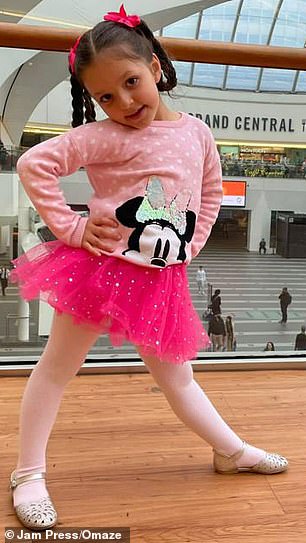 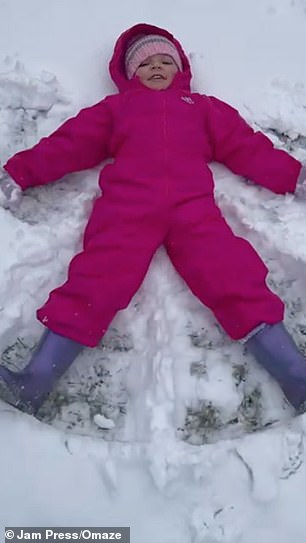 Mia, pictured after the successful treatment, is now able to ‘grow up and enjoy being a child’, according to her mother Anjna 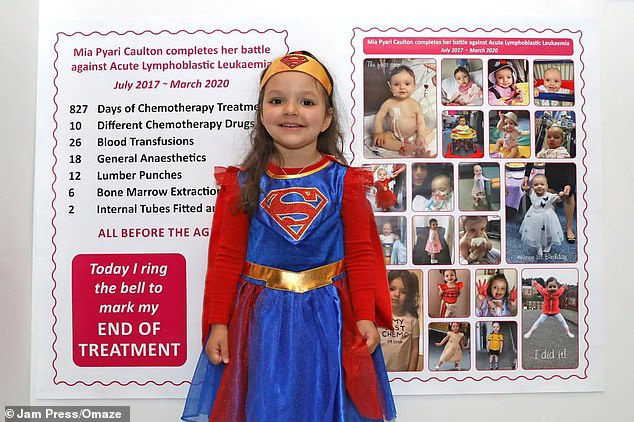 Supergirl: After three years of treatment, Mia rang the bell to mark the end of her grueling plan to treat her leukaemia 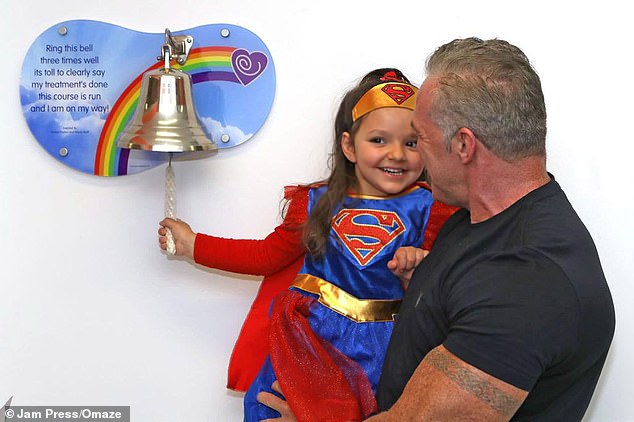 End of treatment: Mia rang the bell signaling the end of her treatment in July 2020 – three years to the date of her diagnosis

Anjna said: ‘Mia rang the bell to mark the end of her treatment in July 2020, exactly three years to the date of her diagnosis. It was a very special and emotional day.

‘We are pleased Mia is doing well. We only have one wish for Mia – that she goes on to live a full and happy life.’

The family was supported by Blood Cancer UK throughout the ordeal.

Anjna said: ‘The care and support of Birmingham Children’s Hospital and Blood Cancer UK has given us the greatest gift imaginable – being able to watch our beautiful daughter grow up and enjoy being a child.’ 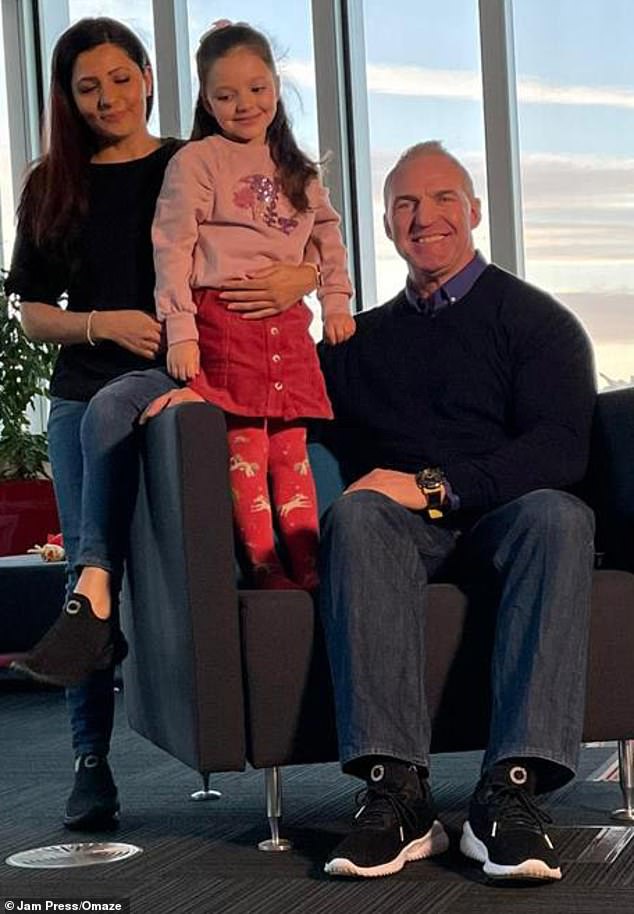 The family, pictured after Mia’s recovery from cancer, say they only have one wish for Mia – ‘that she goes on to live a full and happy life’

The family are backing a new campaign launched by Omaze Million Pound House Draw, which will raise crucial funds for the charity.

The initiative means a stunning 4,200sq ft Cornwall home worth £3 million is currently up for grabs with tickets starting at just £10.

The fundraising campaign will bag Blood Cancer UK a minimum donation of £100,000 guaranteed, and has a target raise of at least £500,000.

The house will be mortgage-free, with all stamp duty and legal fees also covered. The winner will even get £50,000 cash to help them settle in, and is free to either live in the house, rent it out or sell it.

The draw is also backed by Olivier Award winning actress and Blood Cancer UK supporter Dame Penelope Wilton, who has been involved with the charity since appearing in the film Calendar Girls – alongside Dames Helen Mirren and Julie Walters – in 2003. 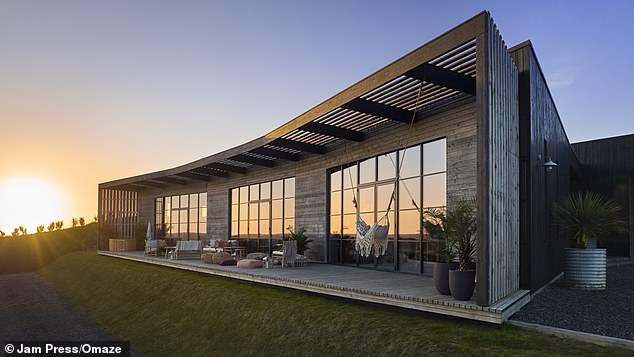 Now the family is supporting a prize draw by Omaze Million Pound House Draw, offering this Cornwall home worth £3 million as a prize, which will raise crucial funds for Blood Cancer UK 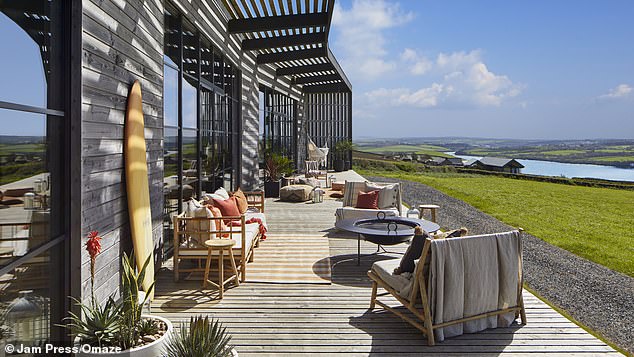 The 4,200sq ft home will be mortgage-free, with all stamp duty and legal fees also covered

Celebrities
In this day and age, I feel like it’s actually pretty easy to avoid being transphobic? Like, you actually have...
Lifestyle
Us Weekly has affiliate partnerships so we may receive compensation for some links to products and services.The 2022 Nordstrom Anniversary...
TV & Movies
LOVE Island fans are all saying the same thing after Paige Thorne insisted Jacques O’Neill doesn’t have any red flags....
World News
A Ring doorbell captured the moment a gloveless delivery driver appeared to have a deep and prolonged scratch of his...
Beauty
Doja Cat Is Making a Case For "Money-Piece" Highlights in Summer If you thought "money-piece" highlights were made for the...
Fashion
A STYLISH size 16 woman has showed off the New Look dress that is perfect for summer. TikTok @marianna_romain looked...
Recent Posts