Parents of Nigerian boy, 9, with a rare form of blood cancer face race against time to raise £95,000 by Wednesday to pay for a life-saving stem cell transplant because he’s not entitled to free treatment on the NHS

The family of a boy who is battling a rare form of blood cancer say they’re desperate to raise £95,000 by Wednesday to pay for his life-saving stem cell transplant.

Nathaniel Nabena, nine, lost his eye to Myeloid Sarcoma last September and travelled to the UK from Nigeria with his family for a private specialist eye prosthetic in London two months later.

While in the UK he was diagnosed with acute myeloid leukaemia, but is not entitled to free NHS treatment because he is not a British national.

His parents Ebi, 45, and Modupe, 38, originally raised £87,000 so their son could undergo chemotherapy, but need a further £95,000 to undergo a life-saving transplant.

The total currently stands at £107,713, but the family need to reach their goal of £201,000 by Wednesday, appearing on This Morning today to appeal for more funding. 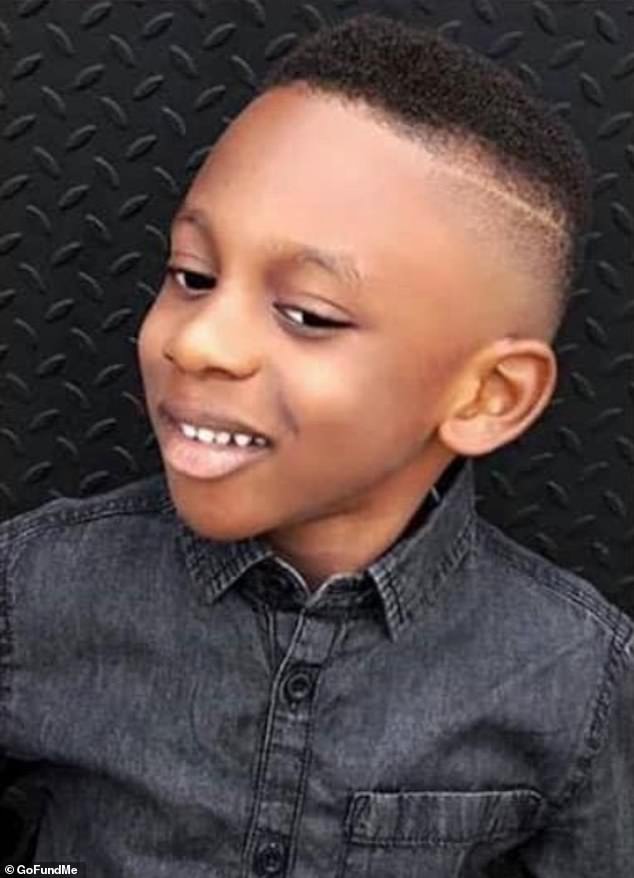 Nathaniel Nabena, nine, needs £95,000 by Wednesday to pay for his life-saving stem cell transplant, which he is not entitled to on the NHS because he is not a British national. 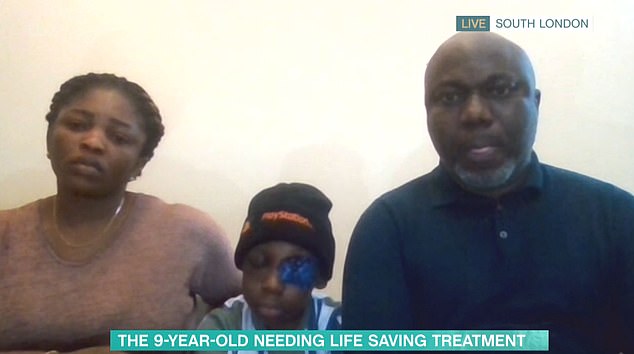 The total currently stands at £107,713, but the family need to reach their goal of £201,000 by Wednesday, appearing on This Morning today to appeal for more funding

‘We need about £150,000, because Great Ormond Street hospital have waived a lot [of fees] and the great British people, their generosity and support have helped us so far in tackling the first treatment and this is just the final one to give him back his life.’

Nathaniel had his eye removed at London’s Moorfield Eye Hospital in November last September after being diagnosed with a myeloid sarcoma while living in southern Nigeria.

His family raised £5,000 so he could travel with his father in November, but within days of arriving he began having nosebleeds and had a high fever and was rushed to Croydon University Hospital.

What is acute myeloid leukaemia?

Acute myeloid leukaemia is an aggressive and rare form of blood cancer.

The symptoms of AML usually develop over a few weeks and become more severe.

According to NHS Choices, the symptoms include:

In advanced cases, patients are incredibly vulnerable to life-threatening infections and internal bleeding.

If a GP suspects leukaemia, they will arrange a blood test to determine blood cell production.

In AML, stem cells within the patient’s bone marrow produce too many immature white blood cells, which are not capable of fighting infection.

This also can lead to a decrease in production of the oxygen-carrying red blood cells and platelets that help the blood to clot.

Each year around 2,600 people in the UK are diagnosed with blood cancer.

After diagnosis, patients need urgent chemotherapy due to the aggressive nature of the cancer.

In some cases, radiotherapy may be needed along with a bone marrow or stem cell transplant.

His father recalled: ‘When he lost the eye he became better and we decided to come and fix the eye.

‘But unfortunately when we arrived, after a few days he started bleeding from the nose and had a very high fever and they called the ambulance and he was taken to A&E and diagnosed and has leukaemia in his blood and bone marrow.’

After being diagnosed with the rare form of blood cancer – which was so aggressive he could have died within weeks without chemotherapy – the family managed to raise £87,000 for his first round of treatment.

He underwent three rounds of chemotherapy at Great Ormond Street Hospital to prepare him for his lifesaving treatment, but still needs to raise money for his life-saving transplant.

Surgeons at Great Ormond Street Hospital will operation itself for free, but consultants say that because his cancer could return at anytime, the cash must be raised by Wednesday while chemotherapy is keeping the cancer at bay.

Nathaniel says it makes him ‘happy’ to think of all the people who have donated money to his treatment, while Ebi says he ‘doesn’t want to know the outcome’ if they are not able to raise the necessary funds.

‘Doctors have advised we cannot afford to wait, if we do not do that [have the transplant], all the work we have done and funds we have raised it will all be a waste.

‘We do not want to know the outcome of not having this lifesaving treatment.’

Parents Ebi, a business analyst, and wife Modupe are currently staying with family in Croydon, South London, and were initially told the ­hospital bill could be as much as £825,000.

Ebi told the Mirror earlier this month: ‘We’ve seen a dramatic turnaround from the hopeless situation we were in six months ago.

‘It’s incredible that the doctors are treating him in their private work without charging.

‘They are wonderful. We are so grateful to everyone for giving us hope but at the same time asking people to help Nathaniel cling on to life. We know it’s a lot to ask.’