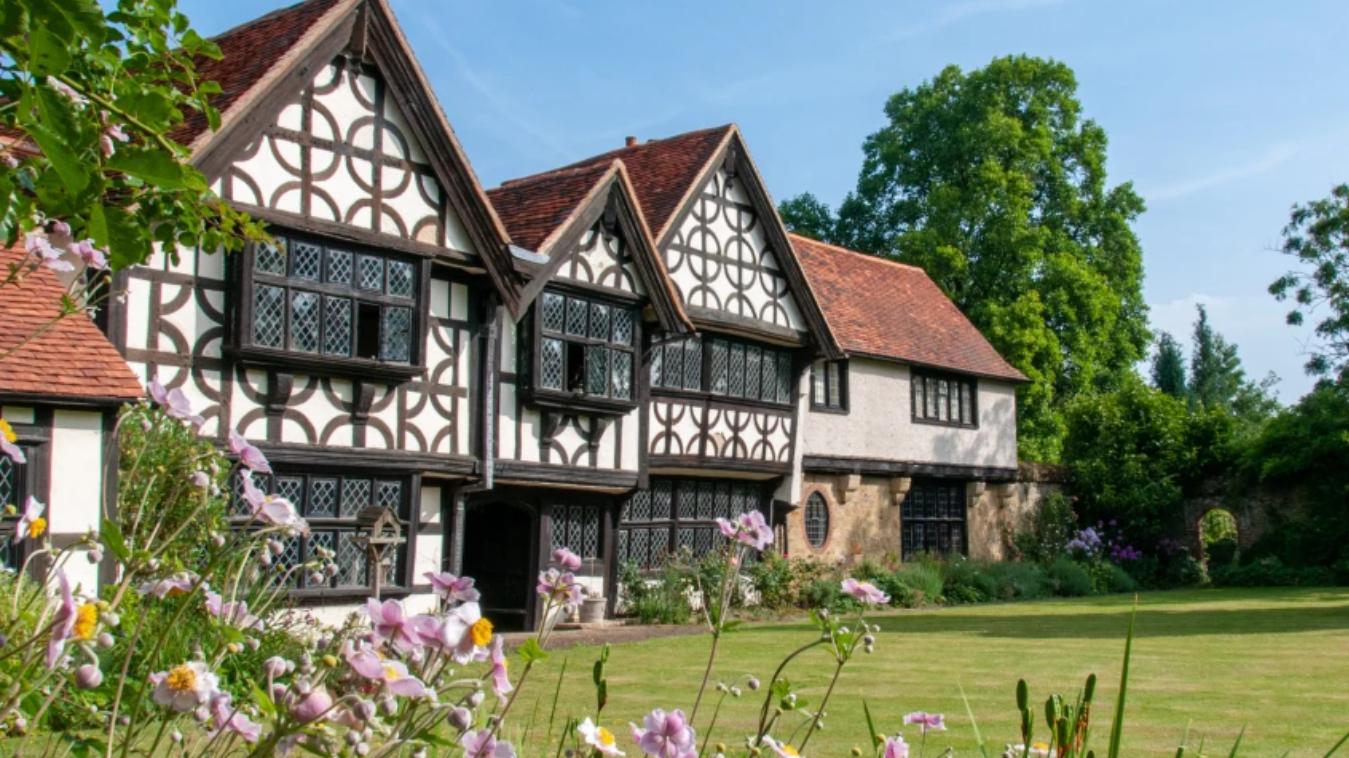 A centuries-old house with links to several monarchs is on the market for a staggering £11,000,000.

Great Tangley Manor was thought to be Prince John’s hunting lodge in the 12th century, and it was used as a filming location for Miss Marple’s The Moving Finger in 2006.

It was often visited by royalty in the 19th and 20th century, and even has the signatures of King George V, Queen Mary and King George VI scrawled on several of the windows.

These days, the impressive property has close to ten acres of land with a moat, an indoor swimming pool, a helicopter hangar and a Second World War air-raid shelter.

What’s more, the Wonersh, Surrey property is Grade I listed and has foundations dating back to 1016, as well as timbers from the Spanish Armada, which where gifted to the owner of the house at the time as a thanks for contributing to the Crown during the battle against the Spanish.

Part of the home was burned in a fire and partially rebuilt as a medieval hall house in 1582.

The property was owned by the Caryl family from the 16th century until the 19th century, when it was bought by Wickham Flower, a founding member of the Society for the Preservation of Ancient Buildings, in 1885.

He tasked architect Philip Webb and designer William Morris with designing extensions and furnishings. During this time, Great Tangley was also visited by Gertrude Jekyll and Edwin Lutyens, as well as Bloomsbury Group members Virginia Woolf and Vanessa Bell when they were children.

After Flowers died, the manor came into the possession of MP Colonel Hegan Kennard, at which point the property began being visited by royalty on a regular basis.

If that wasn’t enough excitement for one house, it was also a summer home to a Vanderbilt heiress in 1913.

Oliver Custance Baker, from Strutt and Parker, said: ‘Homes like Great Tangley Manor don’t come to the market very often and the launch of its sale is yet just another moment in this building’s long history.

‘For somewhere that celebrated its millennium in 2016, it’s very special to be part of the process that is finding the next custodian of such an important piece of this country’s heritage.’

He advised not being fooled by the home’s ‘impressive’ stature and size, as it retains a ‘welcoming, reassuring and charming’ feel.

Original features include timbers dating from the early 11th century, Saxon walls, a moat, and etchings from George V, Queen Mary, and George VI on the window panes.’

Oliver adds: ‘Further to this, the house provides modern-day living to complement such a rich history with the indoor swimming pool, Biomass boiler, and helicopter hanger.

‘The current owners have carefully pieced the house back together with great consideration and awareness, and are a testament to Great Tangley Manor.

‘The house is a brilliant example of building upon an existing structure in a sympathetic way, both during the Arts & Crafts movements and in the decades since.’

The current owners bought the property in two stages, as it had been divided, and worked at length to turn it back into a single manor, with the main house boasting more than 11,000 sq ft of accommodation.

This includes ten bedrooms, multiple reception rooms and six bathrooms, as well as a 40ft indoor swimming pool and sauna.

Phillipa Dalby Welsh, from Savills, said: ‘Great Tangley Manor is simply the most beautiful and historic country house I have seen in a very long time.

‘With a home being on the site for over a thousand years and possibly the longest inhabited house in Britain, naturally Great Tangley has evolved over time with each addition and renovation being carefully designed and carried out by the best craftsmen of the day.

‘The home has been witness to so much history and this is evident from the second you see the fabulous moated gardens, let alone when you step through the front door.

‘Not many homes can lay claim to once being a 12th-century Royal hunting lodge, having timbers reputedly from the Spanish Armada, a William Morris design named after it that featured in Queen Victoria’s Windsor apartments and renovations by one of Britain’s most iconic Arts & Crafts architects.”