It’s midday in New York and Catherine Zeta-Jones is phoning me, bang on time, from the home in Westchester County she shares with husband Michael Douglas and, during lockdown, their two children, Dylan, 20, and Carys, 18. We’re on the call to talk about her lifestyle and beauty brand, Casa Zeta-Jones – which includes homewares, artisanal coffee and a make-up collaboration with Wunder2. Alongside acting, it’s her passion.

“At this point in my life, I really enjoy having the time to work on my brand and I’m hands-on. I would be making things anyway,” she tells me, her distinctive Welsh accent softened with a faintly American tone. “I make curtains, cushions, I love to design.” 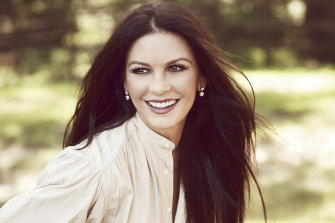 Catherine Zeta-Jones: “There are so many treatments now that don’t make you look like you’ve just stepped off Mars, so it goes back to self-confidence. An inner confidence is very empowering for women. Whatever that takes, do it.”Credit: John Russo/Contour by Getty Images.

At 51, Catherine knows what works for her beauty-wise, too. “I’m a huge lover of old Hollywood glamour and a bit of an eye-make-up girl. I literally don’t put the bins out without mascara on, or eyeliner. I’ve probably had every make-up product put on my face, by some of the greatest make-up artists in the world.

“I’m not the kind of actress who never wears make-up unless they’re in front of a camera – I actually really love make-up,” she says, laughing.

Juggling her many passions is a world away from Catherine’s humble beginnings. Born in 1969 in Swansea, where her father owned a sweet factory and her mother was a seamstress, Catherine was always desperate to perform. At four, her mother bought her tap shoes for dance classes; at nine, she landed a role in the West End.

“I don’t come from a showbiz family; I auditioned for Annie and I got the job. Dancing was a real passion for me. My mother still doesn’t really know where it came from. I’m a very private person, but you put me on a stage and the lights just turn on for me.

“I was brought up going to London, standing in the cold to audition, being refused, going around the corner and standing in line again. You harden yourself to rejection – it takes a certain kind of person to be able to cope with that at a very young age.”

“I’m a very private person, but you put me on a stage and the lights just turn on for me.”

By 15, she had dropped out of school to concentrate full-time on acting, and by 18 she was playing the lead in the musical 42nd Street. Her next step was a move to television, starring opposite David Jason in the period comedy-drama series The Darling Buds of May from 1991 to 1993. It was the highest-rated show of its time and Catherine became an overnight celebrity.

Wanting to focus on acting rather than “celebridom”, Catherine booked a ticket to Los Angeles, where, after a series of smaller TV roles, she won her breakthrough gig alongside Antonio Banderas in 1998’s The Mask of Zorro, produced by Steven Spielberg. This was followed by Entrapment with Sean Connery in 1999, and then Traffic in 2000, which earned her a Golden Globe nomination. By 2002, she’d returned to her first love, musical theatre, in the film version of Chicago opposite Renée Zellweger, winning an Oscar for best supporting actress.

That run of projects had a common thread: “In my career, there has always been a kind of beauty aspect to it. I was pigeonholed for so many years as being a musical-comedy actress. I always wanted to be cast in one of Helena Bonham Carter’s roles in those period dramas. I dreamed of that, but it never really came my way. I think I was just too Welsh!”

Topping lists for “most beautiful” women has its pressures, I say. “Oh, always. When I read a script and the character’s description has the prefix of ‘beautiful, stunning, gorgeous’, it’s always intimidating. Personally, I would never consider myself a great beauty but my mother always told me to make the best of myself.”

During this time, her personal life went up a mighty notch in the Hollywood stakes, too. While promoting Zorro in 1998, she was introduced to Michael Douglas by mutual friends Antonio Banderas and Melanie Griffith, who were a couple at the time. If she was already considered a Hollywood red-carpet favourite, her marriage to Douglas, 25 years her senior, cemented her standing.

“I married Michael Douglas, who was perceived as Hollywood royalty because he’s the son of Kirk Douglas, so that sort of fed into my red-carpet looks,” she tells me. (Michael’s stepmother, Anne, passed away a few days before our interview. In a tribute on her Instagram page, Catherine wrote: “Our loving matriarch Anne Douglas is now in the arms of her beloved husband Kirk. 102 formidable years old. I love you with all my heart Oma.” )

Catherine and Michael had their first child, Dylan, in August 2000, and in November the same year they married at The Plaza in New York. (The story goes that it was the longest wedding the legendary venue had ever hosted – they were meant to finish at 6pm; instead it finished at 6am the next day.) They had Carys three years later and, for 12 years, raised their son and daughter in Bermuda – where Michael’s mother was from – away from the paparazzi.

“We wanted them to have a normal childhood, not being photographed going to school every day,” Catherine says. “We didn’t want them to be on film sets with a tutor. If I was working, Michael would be home with them, and vice versa.

“I’m very conscious of my kids being very rooted, very down to earth, and I’m always big on manners. I get complimented on how unaffected they are and that’s because they weren’t brought up in Hollywood. We managed to retain some of their childhood longer than other folk.”

After a series of high-profile films, including Ocean’s Twelve and The Terminal, Catherine took some time off. Then, in 2010, Michael was diagnosed with, and recovered from, tongue cancer. She came back with a bang, most notably when she portrayed Olivia de Havilland in the 2017 miniseries Feud: Bette and Joan.

Dylan and Carys were at home –Dylan from college and Carys from boarding school in Europe – when the pandemic struck in early 2020. “What was interesting was to be together as a family. It was really comforting. I love having breakfast, lunch and dinner with them … Having them home took my husband and I back to a time when they were much younger.”

One of the things that concerns her now is the impossible beauty standards put upon younger women through social media. “I really feel sorry for my daughter’s generation who are inundated with images on social media with filters,” she says. “There’s not a real representation of a woman. I was never brought up with that. I know for sure if I was brought up in that world, it would have affected me.”

I ask if she ever felt she needed to put on a front. “There’s a confidence I’ve sometimes had to put on when I walk down a red carpet. I have my insecurities like every other woman. But as I’ve got older, I’ve got much more confident about the way I look.”

“For many years now I’ve shied away from pretty roles, hoping for much more fleshed-out, real, warts-and-all characters to play. There are some interesting roles out there for women and it’s getting better for women over a certain age.”

As for her take on anti-ageing treatments: “I am all for whatever makes you happy. There are so many treatments now that don’t make you look like you’ve just stepped off Mars, so it goes back to self-confidence. An inner confidence is very empowering for women. Whatever that takes, do it.” 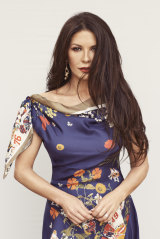 “I’m very conscious of my kids being very rooted, very down to earth, and I’m always big on manners.”Credit:Getty Images

Catherine now seeks out scripts that have no description of the character’s looks. “Most of the more interesting roles are not glamorous. For many years now I’ve shied away from pretty roles, hoping for much more fleshed-out, real, warts-and-all characters to play. There are some interesting roles out there for women and it’s getting better for women over a certain age.”

She recently joined the cast of the crime drama Prodigal Son, in which she plays a “crazy, bad doctor” alongside fellow Welsh actor Michael Sheen. Although only a year apart in age, and both hugely successful Welsh exports, they had never met before filming Prodigal Son. “I was desperate to work with Michael,” says Catherine. “It was like six degrees of separation – we know so many of the same people! We had a fabulous time working together.

“But I’m ready to play a British role in the UK,” she adds. “I’m always back in the UK but I don’t go to London – I go straight to Wales to see family. I’m a very homebody kind of person. My friends call me Cath. I speak with my mam every day, sometimes three times a day.

“It’s essential for me to have the two sides of the world. I have friends who knew me before I became known internationally, people who have been with me the whole journey. It takes those people to keep you grounded.”

As well as her product line and acting roles, Catherine is also producing three projects, something she loves as “it gives you the opportunity to find a piece of work that you’re really passionate about and then work it out with the people you love to work with.

Casa Zeta-Jones is available at casazetajones.com. Season two of Prodigal Son is on Foxtel Now and Binge.

This article appears in Sunday Life magazine within the Sun-Herald and the Sunday Age on sale July 18. To read more from Sunday Life, visit The Sydney Morning Herald and The Age.