The set-up of Netflix’s Australian-made cyber thriller is exactly as it says on the box – pure clickbait.

The eight-parter takes less than eight minutes to play its ace: Nick Brewer (Adrian Grenier), a seemingly sweet, ordinary family man who works as a high school physical therapist, turns up in an online video, holding a placard that proclaims “I abuse women”, with a promise that at 5 million views he will be killed. 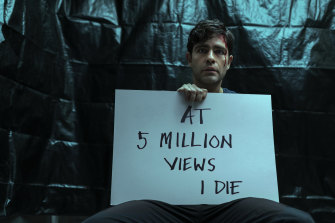 The show, co-created by Tony Ayres and Christian White, wastes no time in setting up its central plot point. Credit:Netflix

It’s the sort of content guaranteed to go viral, and the sort of high-concept plot device that co-creators Tony Ayres and Christian White hope will click with audiences.

Clickbait’s central concerns are laid out in the twisted logic of that video: how can people not watch, and not share, content like that, even if doing so will lead to a man’s death? More broadly, in a world in which technology grants us anonymity, creates a gulf between action and consequence, and gifts us the veil of plausible deniability when it comes to ultimate responsibility (if you are only the 4 millionth watcher, not the 5 millionth, are you off the hook?), what might compel us to act ethically, morally, and with compassion? The bracing answer appears to be not much, apart from the chance of being caught.

These are big questions to wrap in the form of a pulp thriller, but Clickbait does a pretty good job of balancing the desire to make us think with the imperative to keep us hooked.

Each episode of this propulsive tale is told through the eyes of a different protagonist, with enough twists and turns to keep you guessing without sacrificing plausibility too much.

I’m not sure how good an actor Grenier is, but his casting is a masterstroke. Enormously popular in the late 2000s thanks to Entourage, he fell from favour as the show disappeared up its own fundament in its final seasons. His decision to focus on music, the environment and digital technology ventures (how fitting) rather than acting only fuelled the derision from some corners.

In Clickbait, the tension between likeability and its opposite is mobilised to great effect. Is Nick really the perfect family man, married to English teacher Sophie (Betty Gabriel), with whom he has two teenage sons, Ethan (Camaron Engels) and Kai (Jaylin Fletcher)? Or is he really a serial lothario in online chat rooms and dating sites, and maybe also an abuser, perhaps even a murderer?

Though he’s the animating presence of the story, Nick is mostly seen in flashbacks and video footage; it’s the traces of him, mostly digital, that reveal his truth (or his lies). In the real world it’s up to others, especially his sister Pia (Zoe Kazan) and the police detective (Phoenix Raei) assigned to the case to scurry down rabbit holes in search of answers. 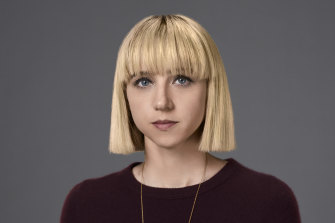 Though it’s about the world Silicon Valley has birthed, Clickbait could have been set anywhere. That it was mostly shot in Melbourne (home to an abundant supply of California bungalows) is perhaps fitting for a show concerned with the way we perform our identities online, and reshape the truth to match the desired narrative.

Amid all the blurring of real and curated selves, Daniel Henshall deserves special mention. The Australian actor, best known for his chilling turn as serial killer John Bunting in Snowtown, here plays Simon, a content moderator for a social media platform who is grieving the suicide of his sister.

Simon owes more than anyone else in the story to the digital realm, but he is also the one most alert to its moral dimension. Henshall is always convincing, but the pathos and pain he brings to this character feels like an island of truth in the sea of uncertainty that is Clickbait.