Costa Coffee has unveiled its latest new vegan ‘sustainable’ offering – a plant-based bacon bap costing £3 – and it has split opinion on social media.

The sandwich, which features meat-free ‘Naked without the Oink’ rashers from Finnebrogue Artisan is available now.

It comes as other major food outlets have seen staggering success with vegan remakes of their iconic offerings – including Nestlé, which recently brought a dairy-free version of the much-loved KitKat to market, and chain bakery Greggs.

The high street stalwart, which launched its £1 vegan sausage roll in January 2019, saw year-on-year profits climb by 13.5 per cent, with many crediting the veggie pastry for the firm’s success.

Now Costa – which already has a few plant-based menu items – could be trying to replicate these successes with its new sandwich – the first time it has offered a plant-based bacon breakfast bap. 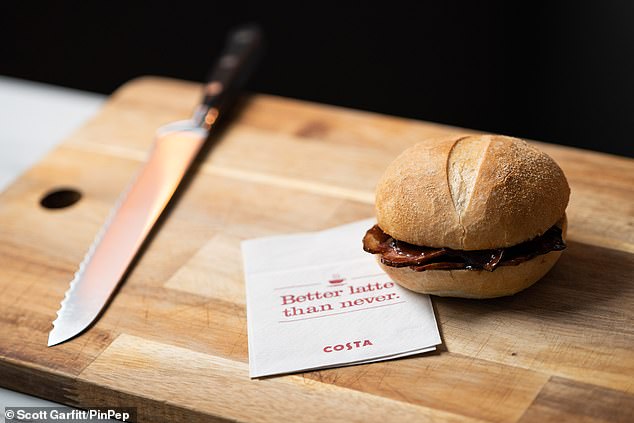 The new bacon bap features ‘Naked without the Oink’ rashers from Finnebrogue Artisan, which recently obtained a grade A enviro score from Foundation Earth 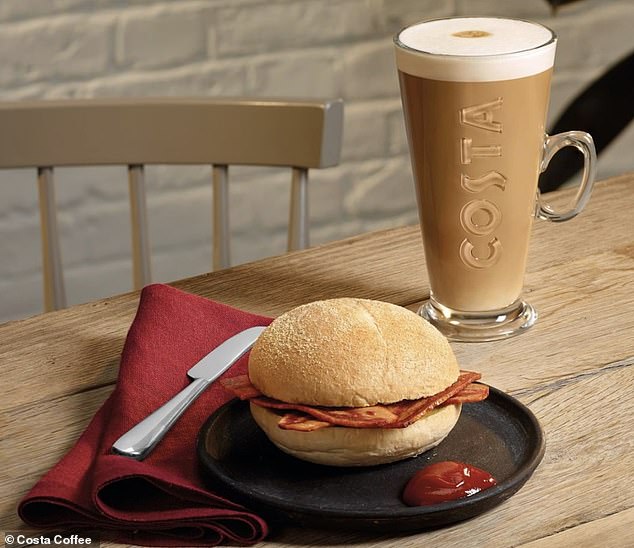 The sandwich is served on a white roll, with customers offered a choice of either tomato ketchup or brown sauce on the side

Called the Vegan Bac’n Bap, it features a white roll, with spread, and the faux meat. Customers can opt for either tomato ketchup or brown sauce on the side.

Jago Pearson, Finnebrogue’s chief strategy officer, added that the way the rashers are made means the sandwiches are kinder to the planet.

He said: ‘[Naked without the Oink rashers] are a tasty substitute for real bacon and are high in protein, a source of fibre, vitamin B12, iron and zinc. And what’s more, they are made right here in the UK.

‘They also recently obtained a grade A enviro score from Foundation Earth. This means customers can now enjoy our tasty rashers with the knowledge they are produced in a more sustainable way.’

However, not everyone is happy about the new option, with some people taking to social media to blast the bap. 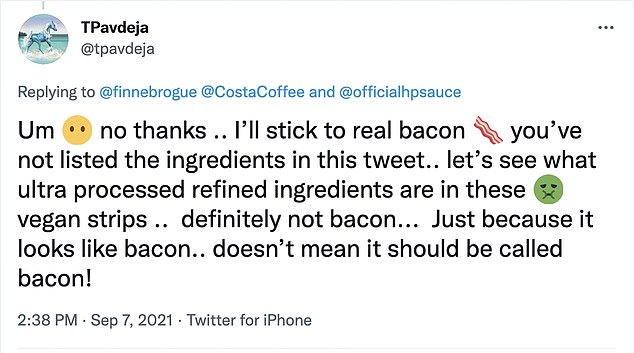 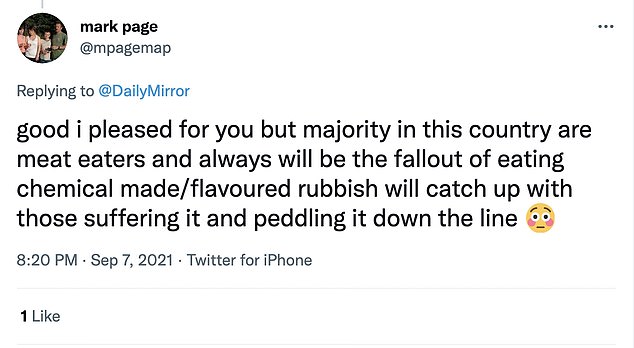 One Twitter user took to social media to write: ‘Um no thanks .. I’ll stick to real bacon.

‘You’ve not listed the ingredients in this tweet.. let’s see what ultra processed refined ingredients are in these vegan strips .. definitely not bacon… Just because it looks like bacon.. doesn’t mean it should be called bacon!’

Another added: ‘Exactly I want bacon not some modified copy.’

A third wrote: ‘Good I pleased for you but majority in this country are meat eaters and always will be the fallout of eating chemical made/flavoured rubbish will catch up with those suffering it and peddling it down the line.’

However, others were more positive. 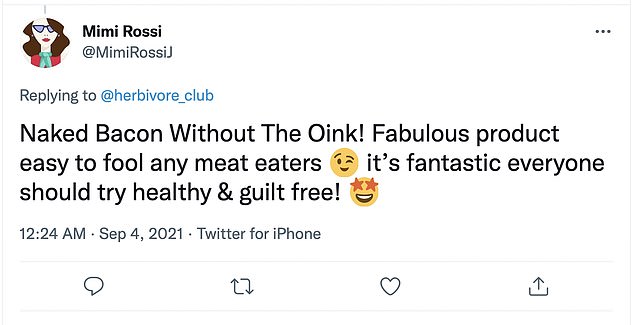 While opinion of the vegan roll was split on social media, some were happy about the new launch, branding the meat-free rashers ‘fabulous’

One wrote: ‘Oooo this looks SO good, you can’t go wrong with a #vegan bacon butty! Making us want one.’

Another added that the vegan bacon looks almost too realistic, writing: ‘That looks like the Richmond bacon. I had that yesterday. Looks like bcon, too much like it.’