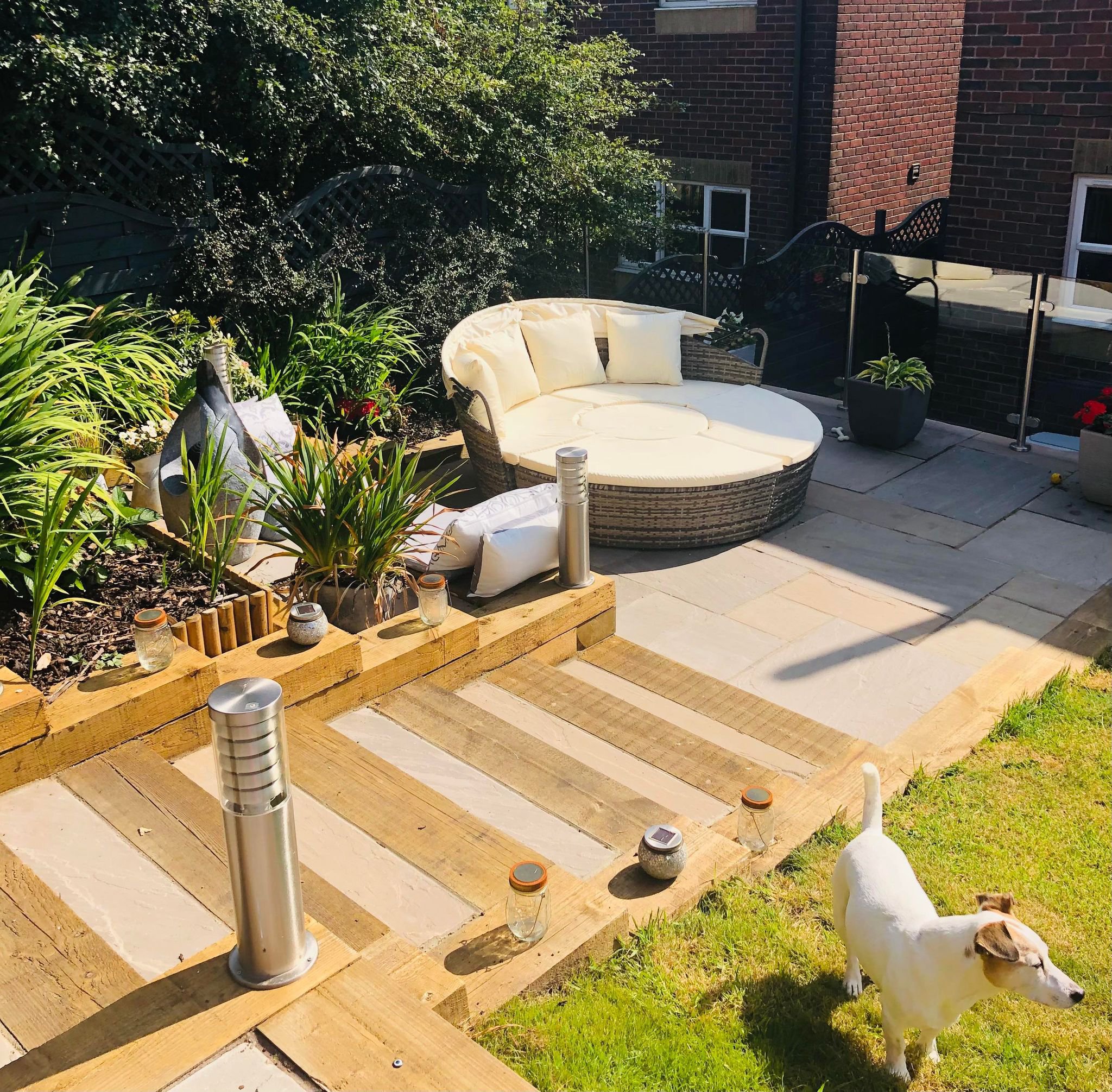 Elizabeth Astin, 56, was keen to give her garden a revamp, and reached out to landscapers to see how much it’d set her back.

But after being quoted £16,000 for the job, registered nurse Elizabeth decided to see whether she could cut costs with a little DIY.

Using hacks and finding bargains to cut costs allowed her and her family to get the garden they wanted while saving £7,000 against the quoted price.

A busy mum of three daughters in their 20s, Elizabeth and her husband bought their Lancashire home 19 years ago when it was newly-built.

She says the garden was a ‘lower patio area with a huge retaining wall and a sloping upper area that was north facing,’ adding that it was ‘not very attractive at all.’

Although the family were keen to upgrade the space, they decided to wait until the kids were older – and didn’t use it to play in – to do so.

Elizabeth told money-saving community LatestDeals.co.uk: ‘Now they are grown up, we wanted to finally tackle the garden and improve it.

‘The first step was planning. It was difficult with the garden being on a slope. We realised we needed at least two levels or terraced areas to be able to have somewhere to entertain and relax.

‘Although the back garden is north facing, it luckily gets the sun at the top of the garden all day long until it sets. We needed to work around this to ensure we maximised the sunshine.’

While saving up, Elizabeth scoured the Facebook group ‘DIY on a budget gardens’ for tips and recommendations from seasoned gardeners. Meanwhile, her husband got started on ripping out the old decking and fencing.

They didn’t do everything themselves, choosing to pay a builder to lay patios and do certain jobs better left to professionals.

Elizabeth said this ate into a large portion of the budget, but was necessary due to the specialist nature of dealing with retaining walls and other structural elements.

She said: ‘The building work was £9k but we saved money by having the electrics fitted by our nephew who is an electrician.

‘Also, we managed to reduce the price by using wooden railway sleepers rather than building retaining walls. The builder provided all the materials.’

A stylish glass fence was top of the wishlist for Elizabeth, costing £3,200, and they saved cash elsewhere to balance out the expense by repurposing leftover materials.

For example, a zen garden area was created using leftover Indian stone and sleepers from the builder, and they moved the old patio slabs to their front garden so nothing went to waste.

Most of the plants were kept and replanted in the new improved yard, but the extras they did buy came from a local garden centre.

Then came the decor to finish off, which Elizabeth sourced from budget retailers.

‘I bought furnishings such as cushions and decorations from Amazon and B&M,’ she said.

‘I probably spent around £100 on these, again trying to source the best value for money. The day bed was from The Range. I searched for the best price and got it for around £400. The same bed on other websites were between £600 and £800 so I basically got it half price.’

She added: ‘Now the project is finally done, it’s our safe haven. We managed to save thousands by combining professional work with DIY and my husband created an amazing little zen area that was previously barren.

‘The garden is a sanctuary for us to relax in now.’

Asked whether she’d change anything about the project, Elizabeth said: ‘The only thing which didn’t go to plan was the installation of the furniture, as it took a while for it to arrive.

‘If we had to do this project again we would order it well in advance as we only received the dining set this week. It’s now in the garage waiting for next year!’