Climate change is the dominant factor causing the increased size of bushfires in Australia’s forests, according to a landmark study that found the average annual area burned had grown by 800 per cent in the past 32 years.

The peer-reviewed research by the national science agency, CSIRO — published in the prestigious science journal, Nature — reveals evidence showing changes in weather due to global warming were the driving force behind the boom in Australia’s bushfires. 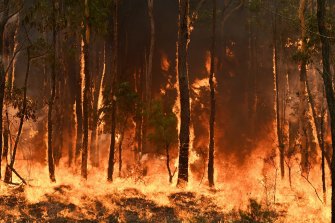 “It’s so tight, it’s so strong that clearly when we have these big fire events, they’re run by the climate and the weather,” Dr Canadell said.

Prime Minister Scott Morrison went to the COP26 climate talks in Glasgow to commit Australia to reach net zero emissions by 2050, and to upgrade his expectations for Australia’s 2030 carbon cuts, but he defied a global push to commit to phasing out fossil-fuel use. Instead, the Coalition government is backing a significant expansion of the gas industry, which it predicts will be 13 per cent larger in 2050 than it is now.

Under the federal government’s gas industry strategy, taxpayers will support the private sector to develop viable new gas fields and develop an extensive network of new pipelines and related infrastructure.

The bushfire royal commission identified climate change as a key risk to ongoing bushfire catastrophe but did not make recommendations about reducing greenhouse emissions to curb the threat.

The CSIRO report found other factors have an impact on the extent and intensity of bushfires such as the amount of vegetation or fuel load in a forest, the time elapsed since the last fire, and hazard reduction burning. But Dr Canadell said the study showed the link between weather and climate conditions and the size of bushfires was so tight, it was clear these factors far outweighed all other fire drivers.

“Almost regardless of what we do the overall extent of the fire, really, is dictated by those climate conditions,” he said.

The weather system that drove a blast furnace’s worth of westerly wind across NSW and Victoria’s forests, sparking some of the worst fires of the Black Summer in 2019-20, will be up to four times more likely to occur under forecast levels of global warming.

“All the various climate trends, which are so important, are all on the rise and they’re all connected to various degrees with anthropogenic climate change,” Dr Canadell said.

The study shows fires are becoming bigger and more common even when the Black Summer is not factored in. When the first half of the study period, from 1988 to 2001, is compared to the period between 2002 and 2018, the average annual forest burned area in Australia increased 350 per cent. That figured ramps up to 800 per cent when the fires of 2019-20, which burnt more than 24 million hectares of land, are included.

Mega-fires, which burn more than 1 million hectares, have “markedly” increased with three of the four recorded from 1930 occurring since 2000, while the gap between big blazes has had a “rapid decrease”, the study says.

Last year, the bushfire royal commission reported fuel-load management through hazard reduction burning “may have no appreciable effect under extreme conditions” that typically cause loss of life and property.

The CSIRO findings bolster that conclusion and call into question calls for native forest logging to be used as a bushfire management tool.

“This is happening regardless of anything that we might or might not do to try to stop the fires,” Dr Canadell said.

The increased frequency of bushfires is giving the bush less and less time to recover, which is changing ecosystems and threatening the survival of many plants and animals that are struggling to adapt to the pace of change and loss of habitat.