D-Day in glorious colour: Vibrant images capture the lighter side of life away from the battlefield – and troops on the brink of victory

CHIN UP! THE LIGHTER SIDE OF D-DAY

A dip, a skip, a toast to the troops – these heartwarming images, brilliantly enhanced with vivid colour, show there was plenty to smile about away from the battlefield 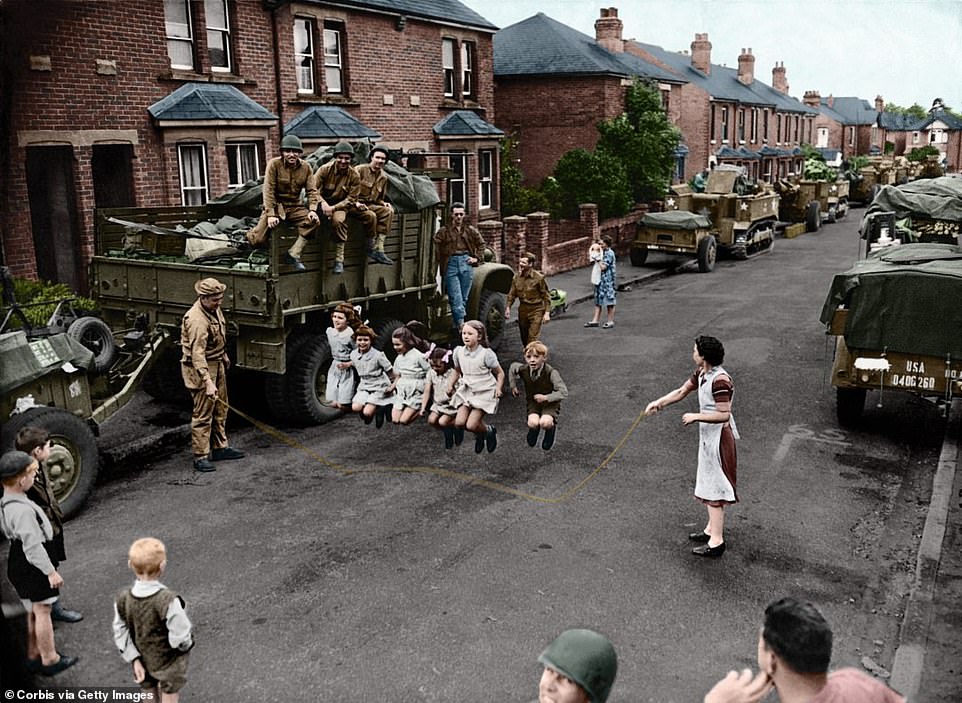 Learning the ropes: soldiers enjoy a skip with children before heading off to France 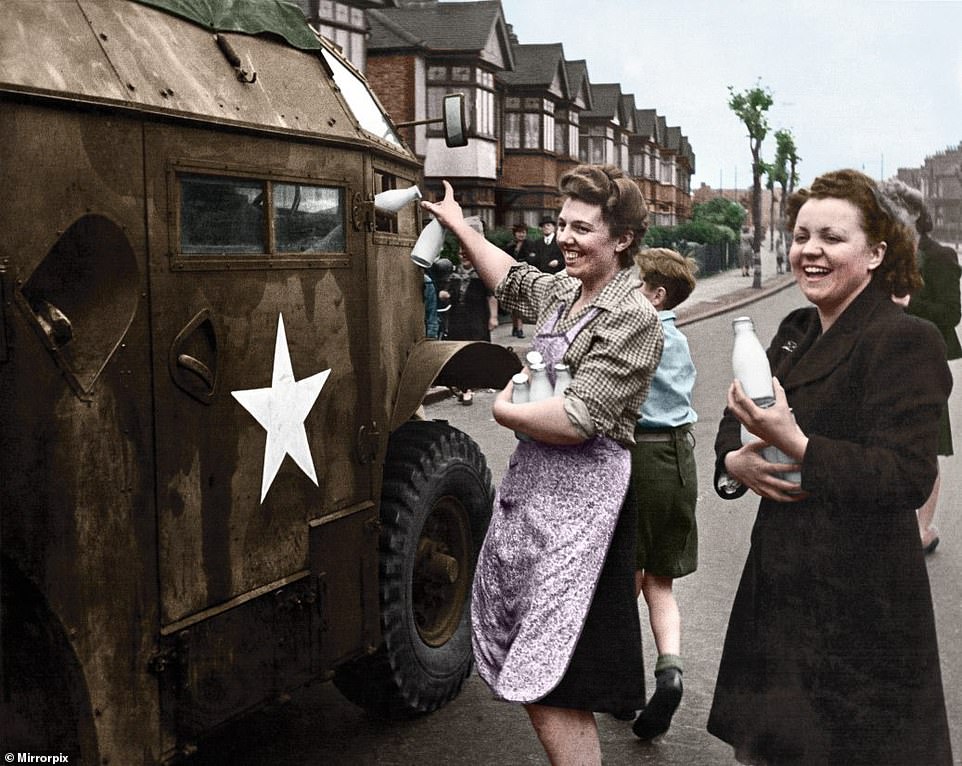 Doing the rounds: locals in east London give troops bound for Normandy a cheery send-off with bottles of milk 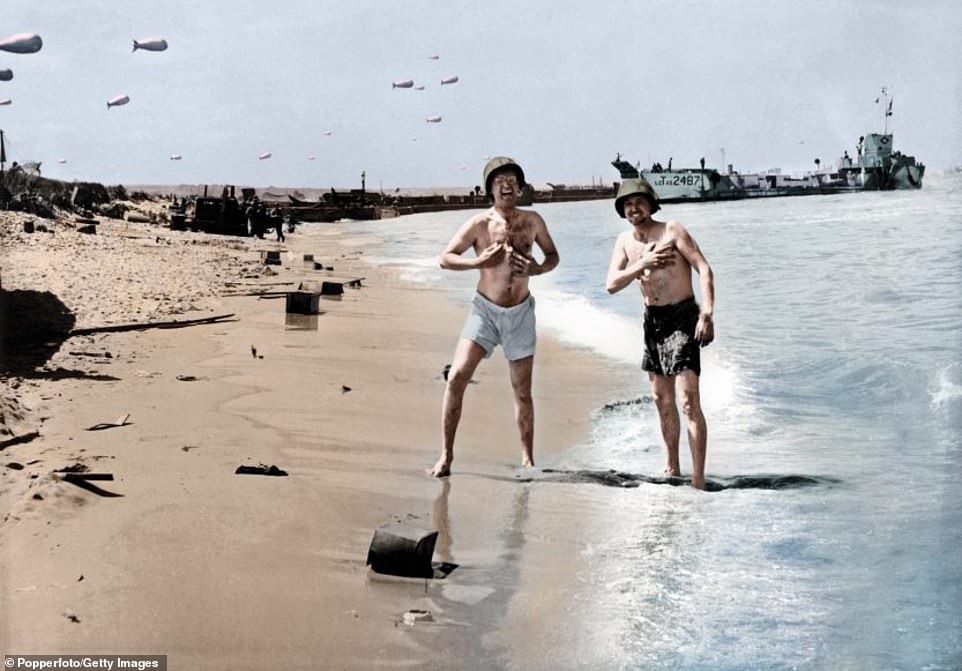 Come on in, the water’s lovely: two US soldiers take a dip on a beach just days after the landings 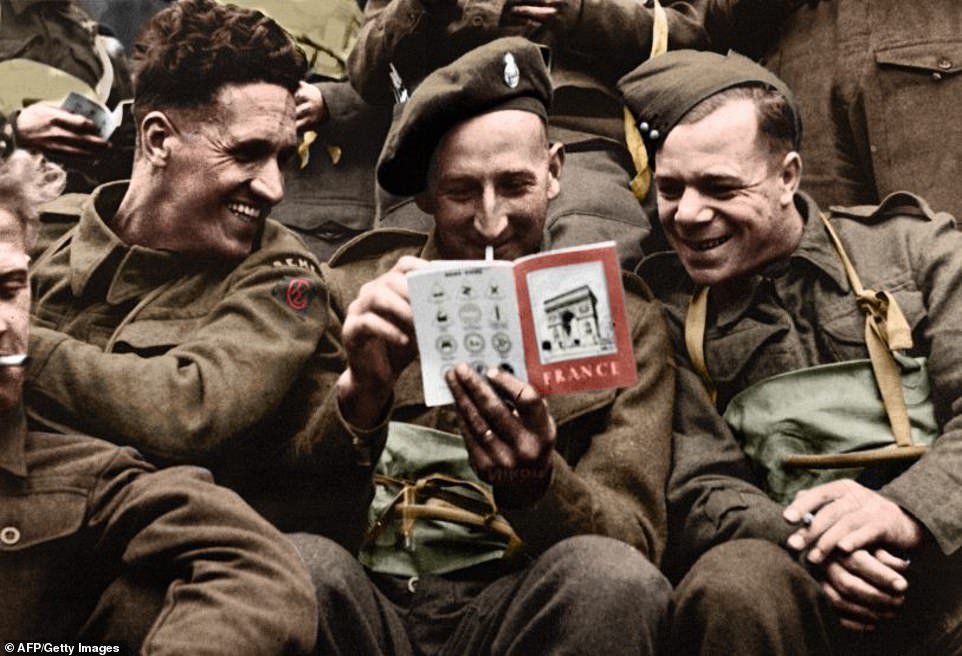 Inky pinky parlez-vous: British soldiers aboard a boat on their way to the Normandy beaches enjoy the lull before the storm by swotting up on a tourist guide to France 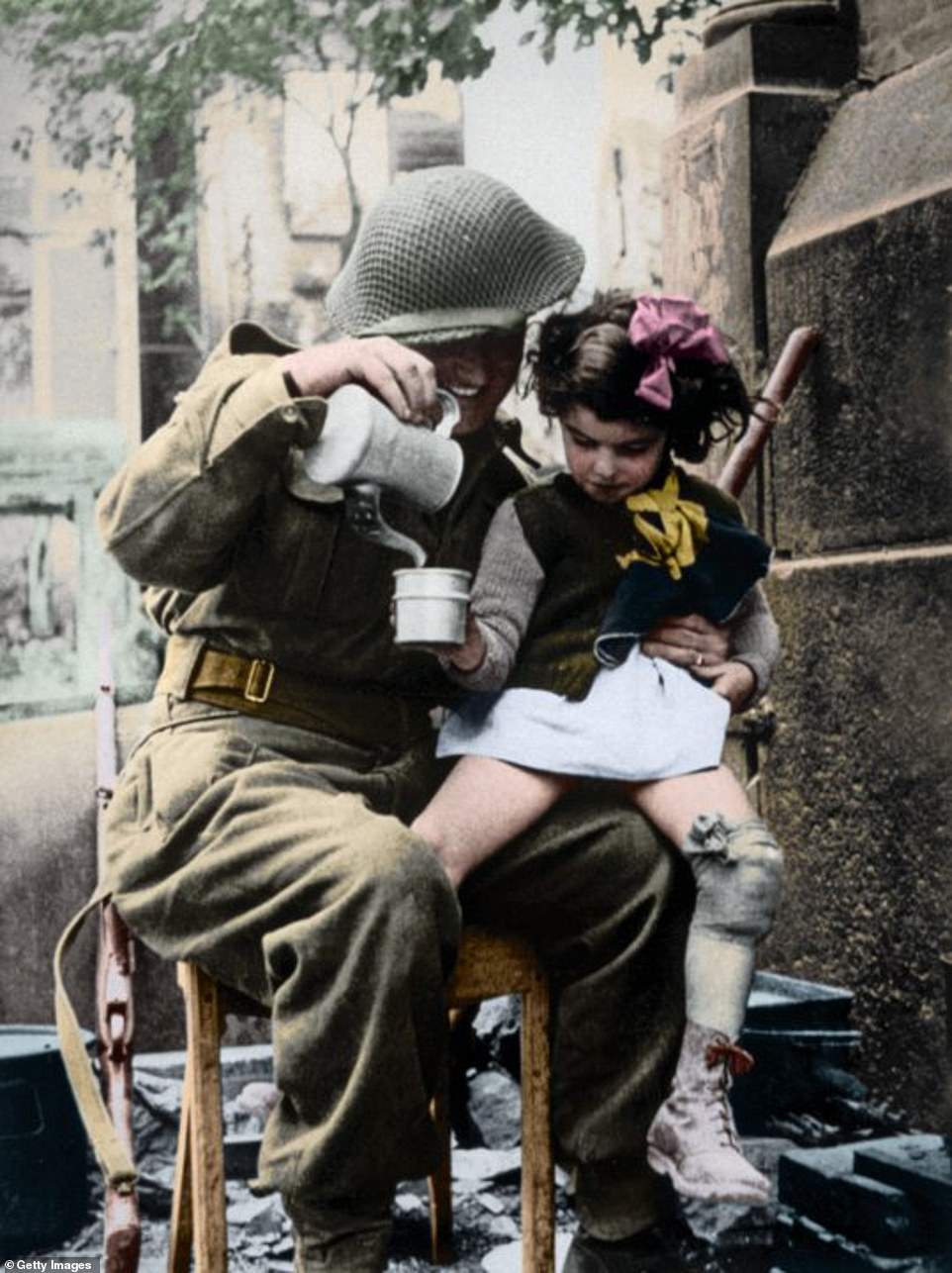 I’ll be mother: a British soldier shares his soup with a little girl in Caen 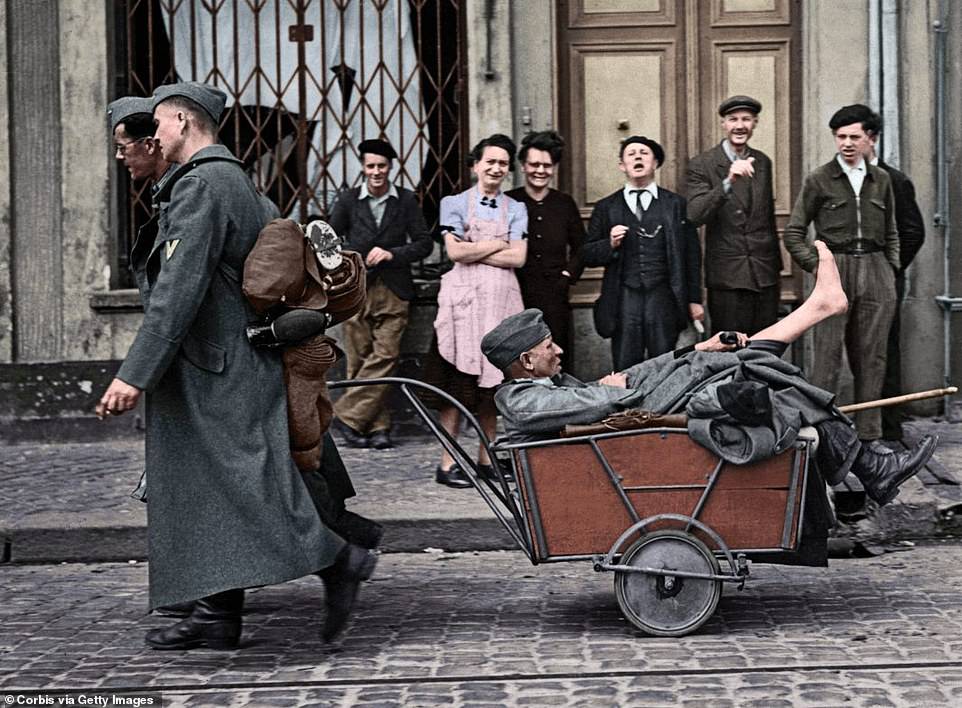 For you, the war is over: An injured German prisoner is wheeled through the streets of Cherbourg in a handcart, much to the disdain of French civilians 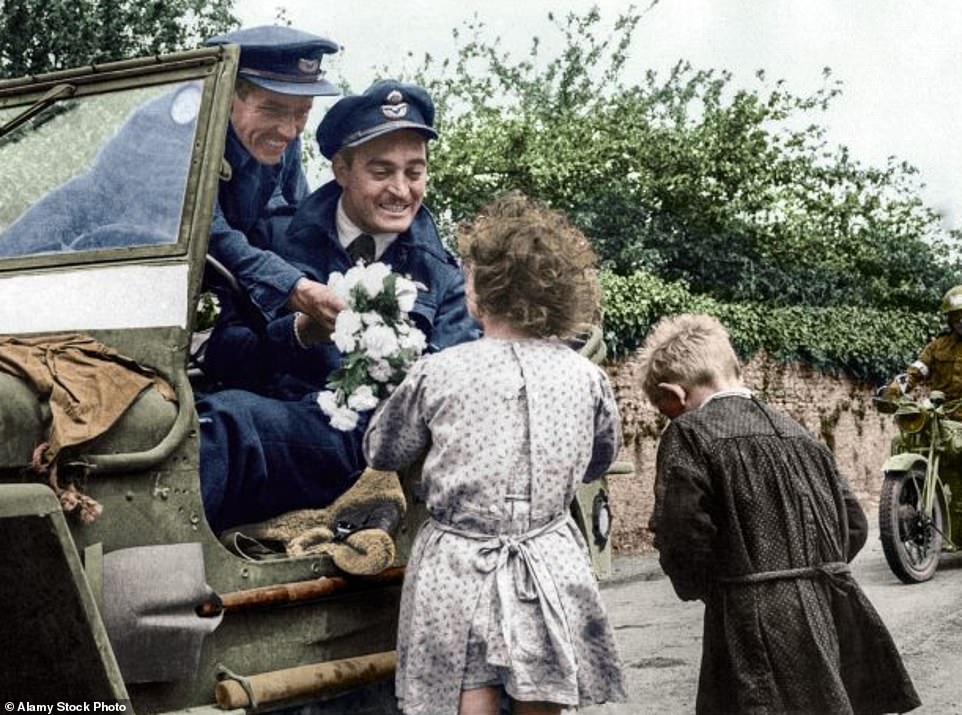 Say it with flowers: two RAF officers are presented with bouquets by appreciative children in France on 10 June, 1944 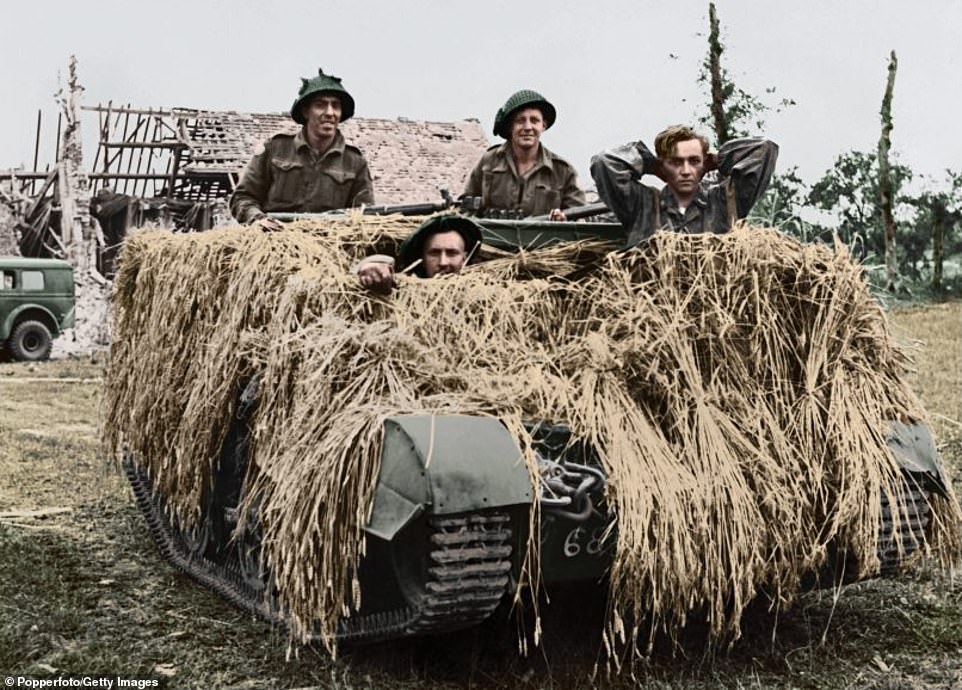 Got you: British troops parade a captured German soldier in a camouflaged armoured vehicle during the fighting for Caen 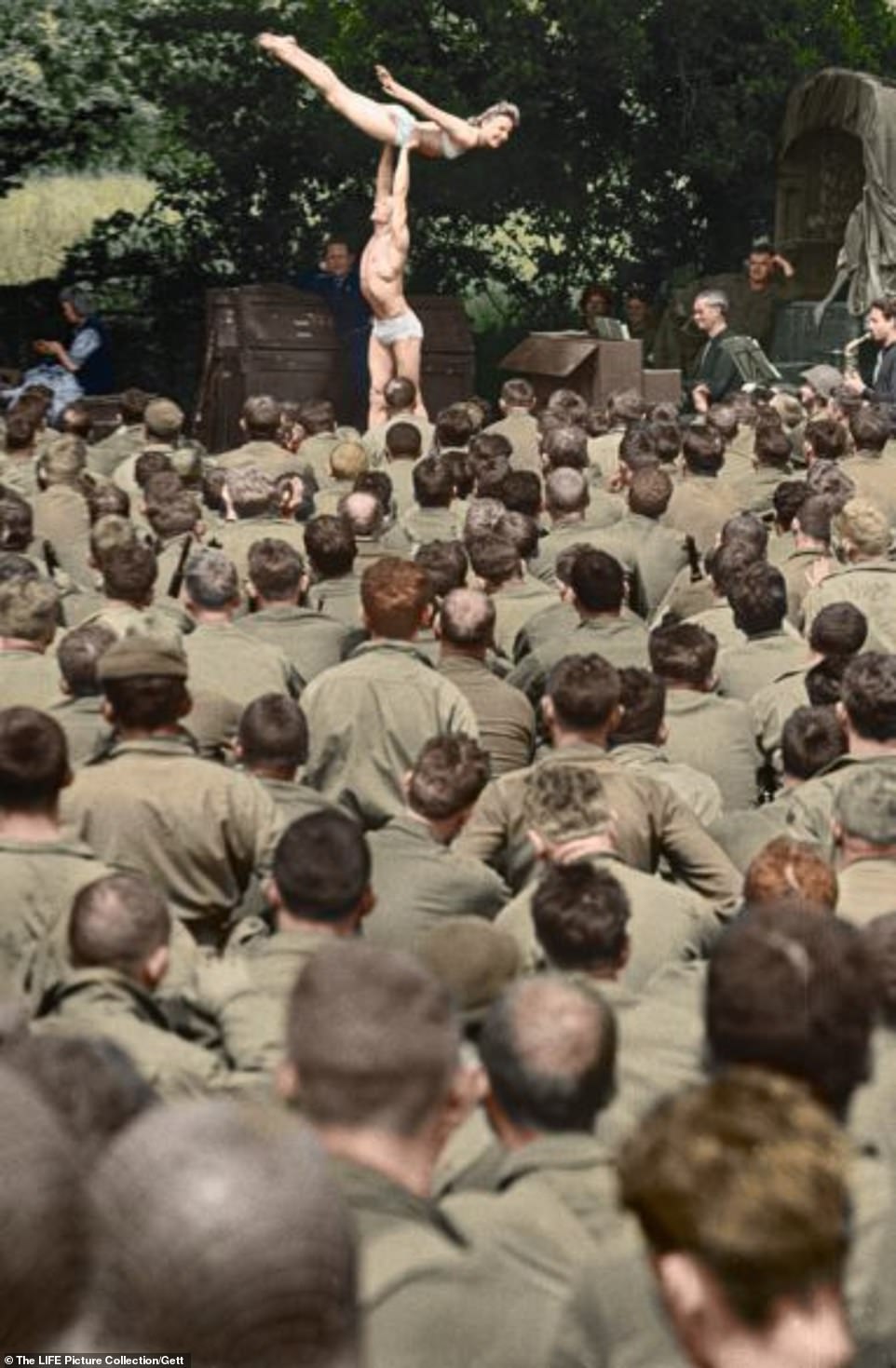 Normandy’s got talent: the first organised show for troops in Normandy following D-Day

SNAPSHOTS FROM THE BRINK OF VICTORY 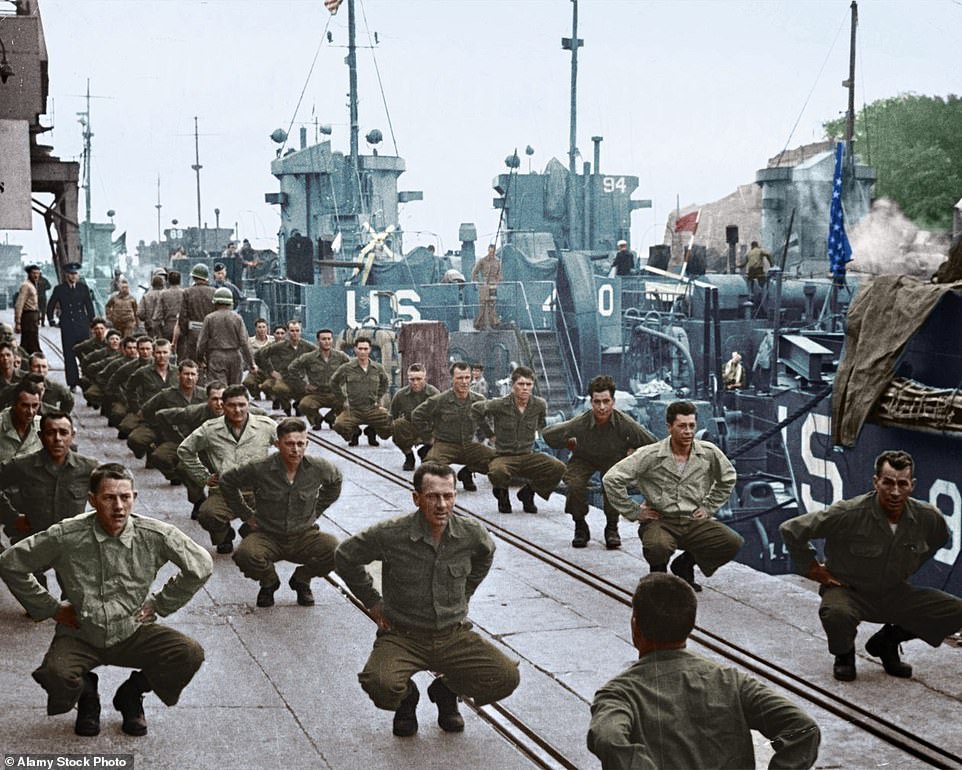 Fit for action: A last-minute limber-up on the quayside for these American soldiers before boarding the boats that will take them across the Channel 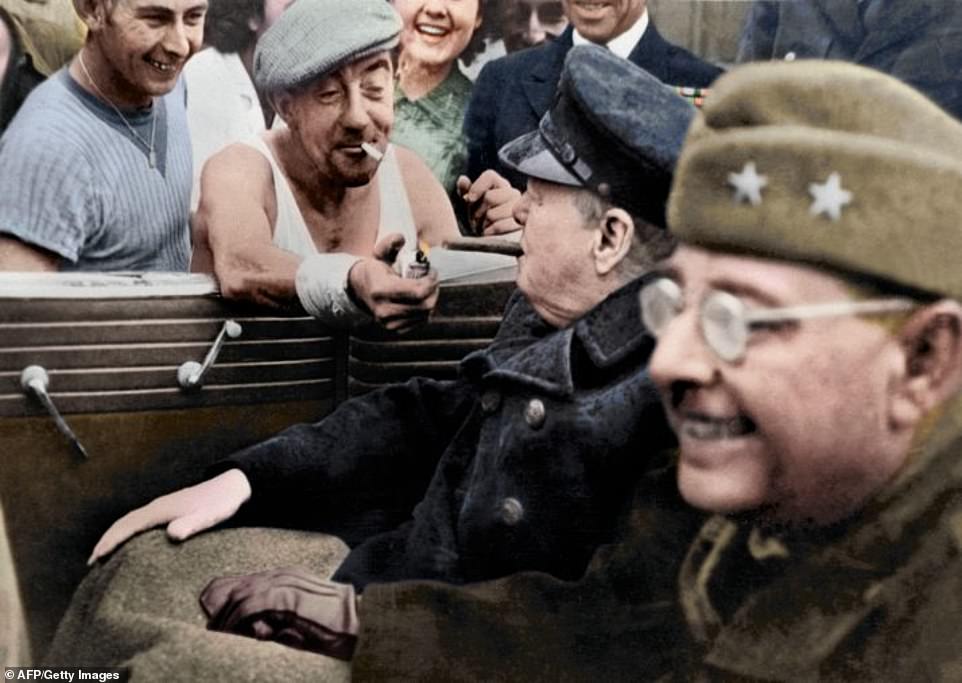 Strike a light: A cheery local helps Churchill light his cigar as he and US general Cecil Moore drive through Cherbourg 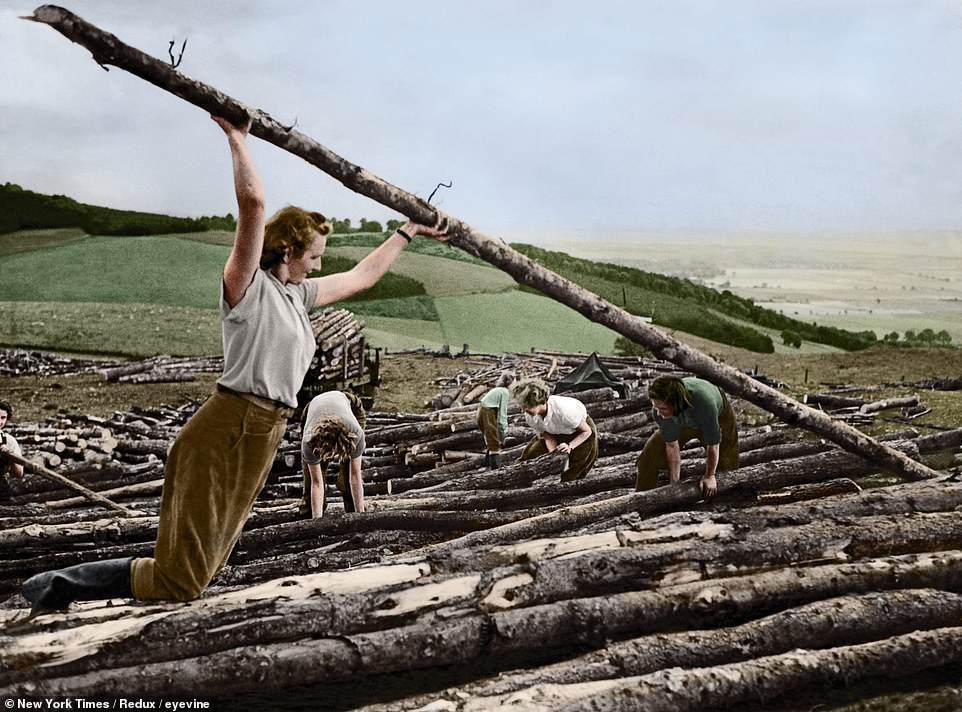 Trunk calls: So-called ‘lumberjills’, who helped to step up homegrown timber production, pile up tree trunks for the saw mills 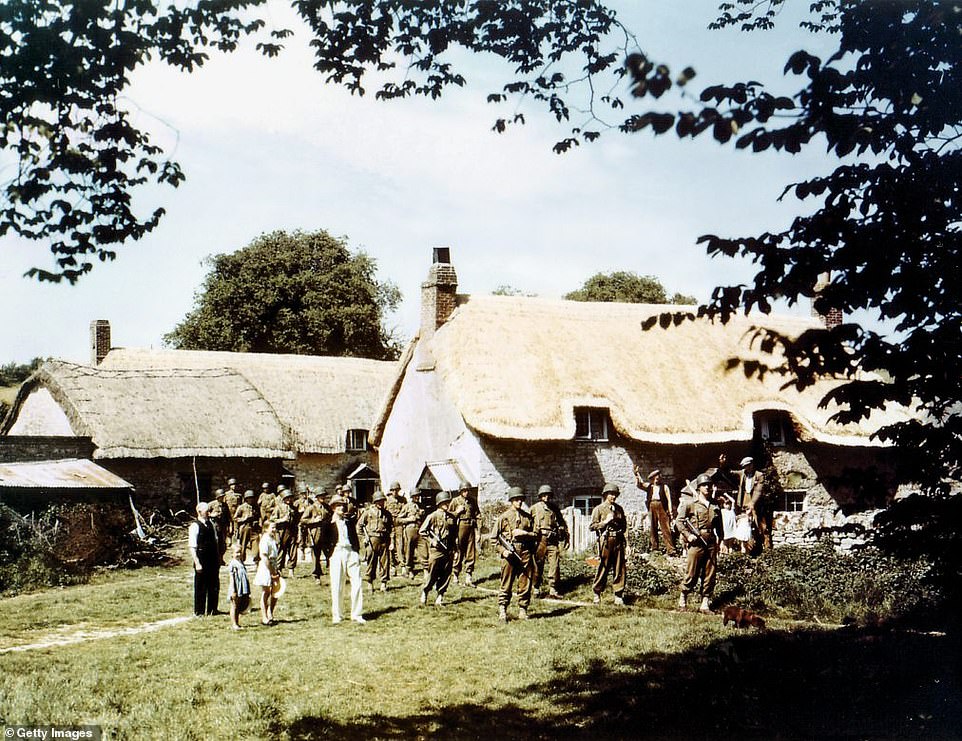 Action men: US troops complete their final training in a picture-postcard English village shortly before D-Day 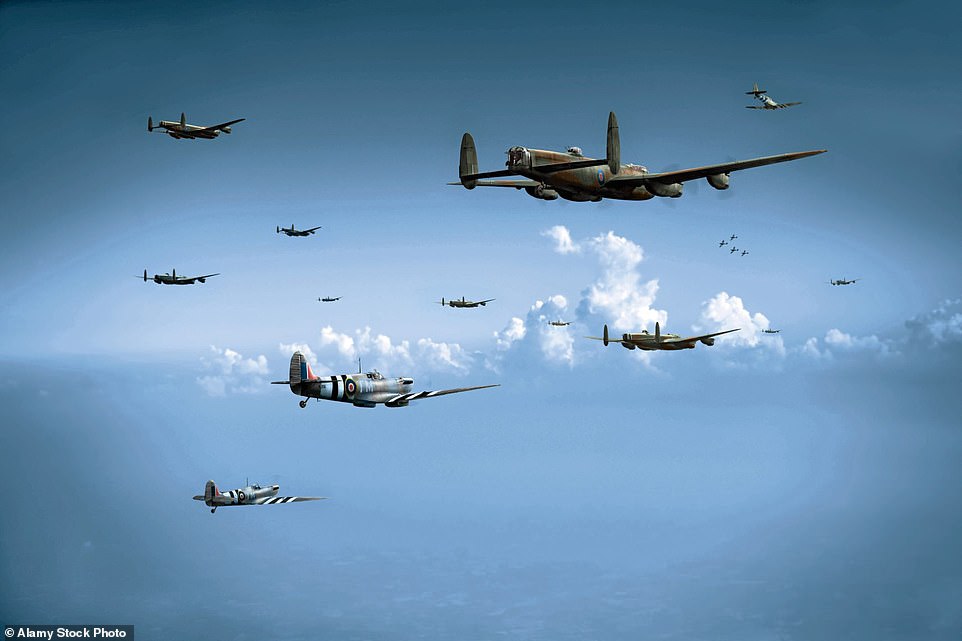 On a clear day: RAF fighters escort Lancaster bombers through summer skies on a daylight operation over occupied France after D-Day 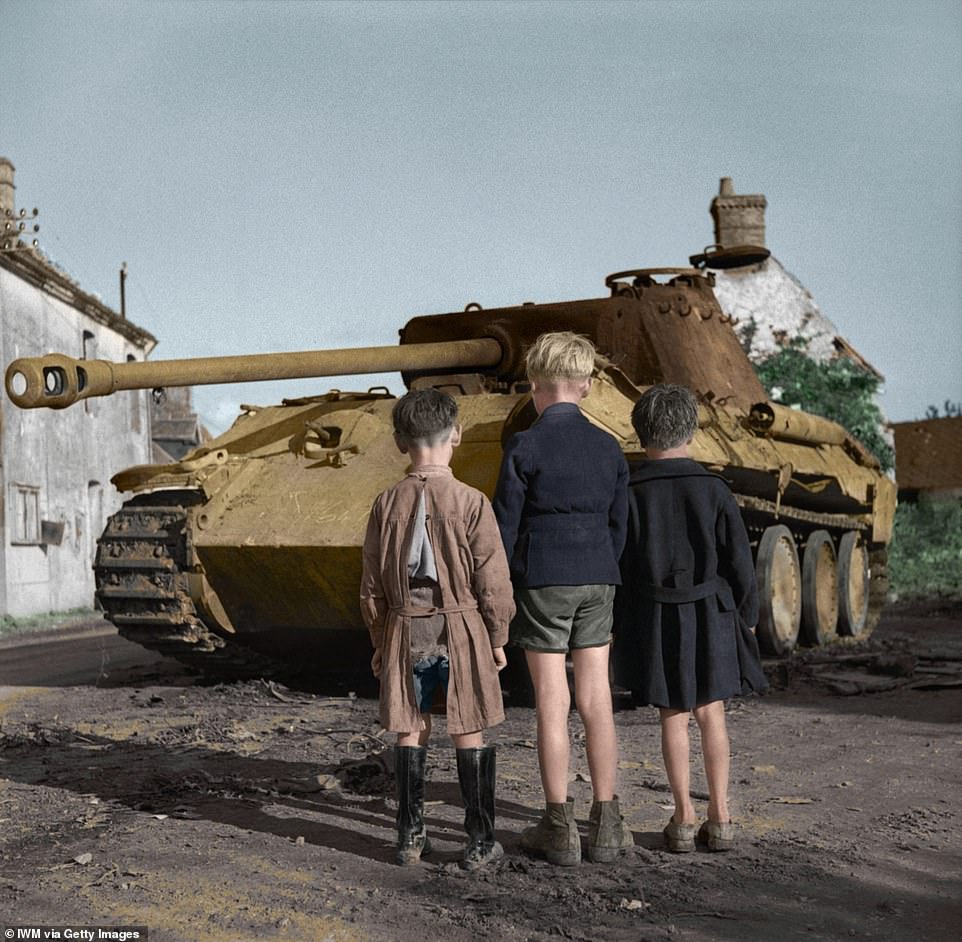 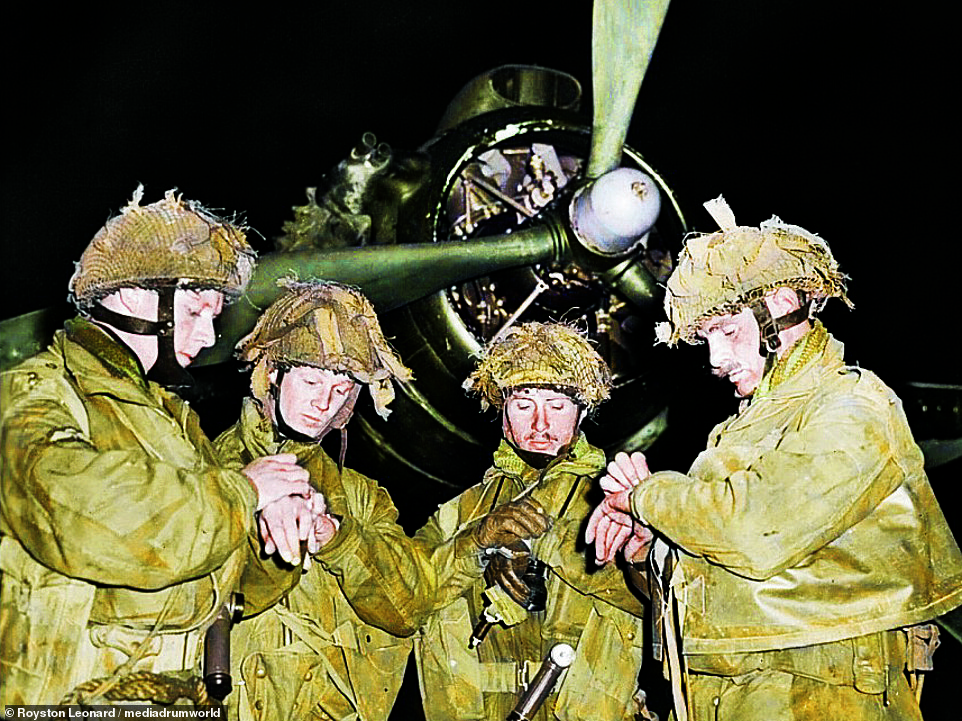 Chocks away: British airborne pathfinders – who land first to mark drop zones – synchronise watches on 5 June at Harwell in Oxfordshire 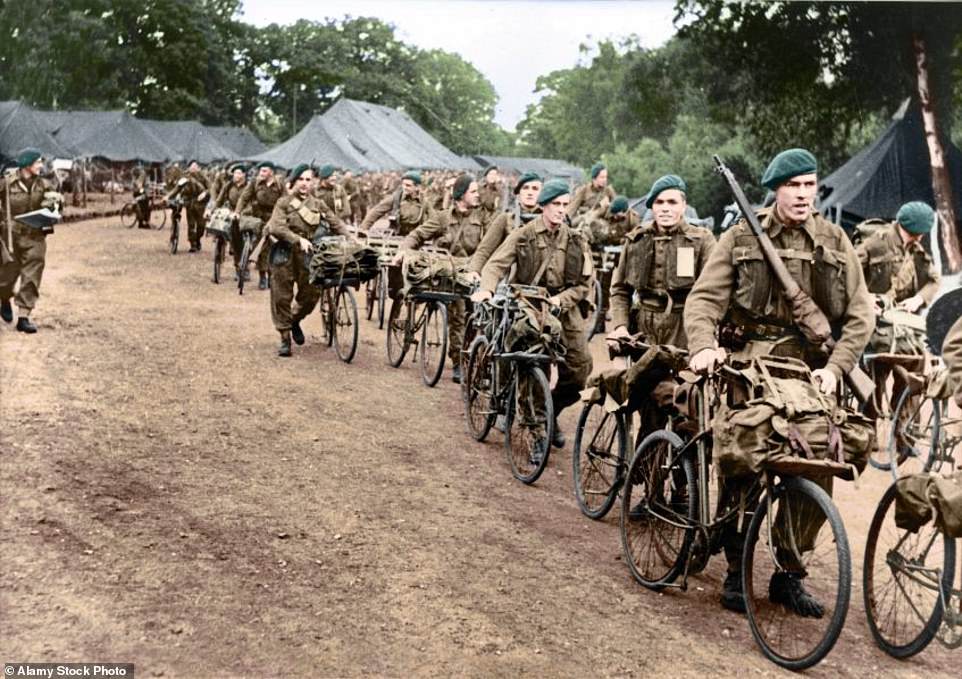 Pedal power: Commandos training with the bicycles they would take with them to France so they could mobilise more quickly