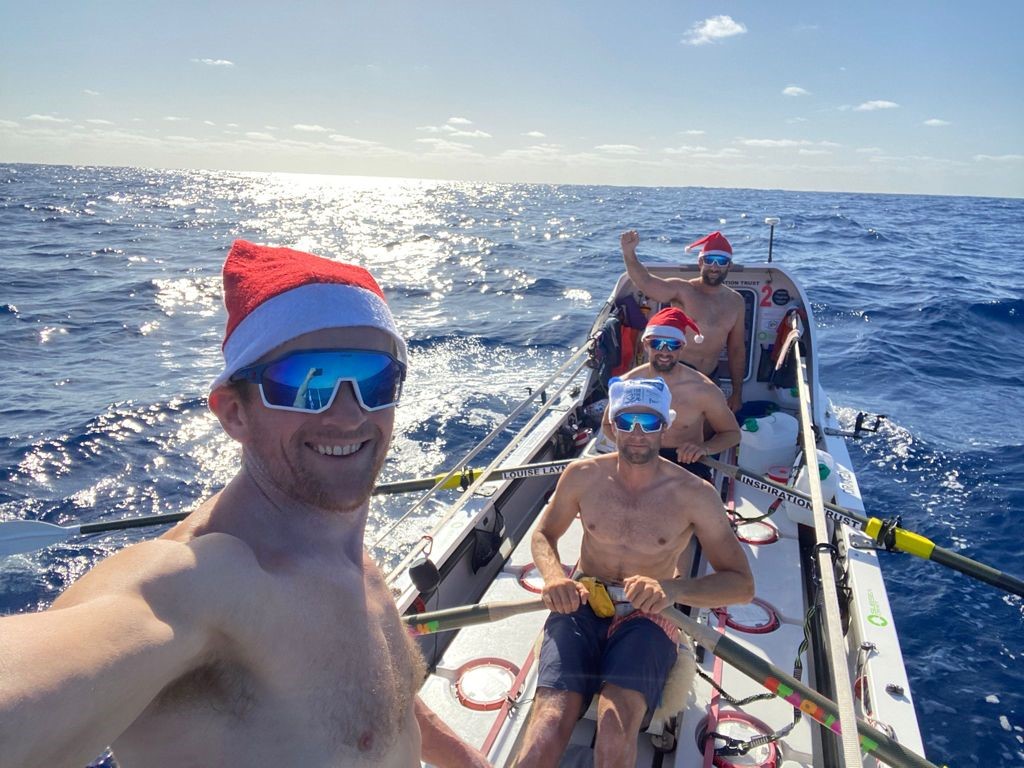 In 2014, Phil Holdencroft’s daughter Isla was diagnosed with leukaemia at only 22 months old.

Through gruelling treatment, Isla has come out the other side and is now in remission and a thriving nine year old.

To celebrate this milestone and incredible achievement, Phil, along with RAF colleagues, are currently rowing across the Atlantic in the Talisker Whiskey Atlantic Challenge.

The intrepid team set off from the Canary Islands on Sunday 12 December, and will reach Antigua, 3,000 miles later, around the end of January.

‘Watching your own flesh and blood walk the tightrope of life and death is more harrowing than anything I’ve experienced on operations with the RAF,’ Phil tells Metro.co.uk.

‘As Isla’s father, I yearned for a way to help my daughter and repay the amazing charities that helped save her life.

‘I pledged to mark each of her five years in remission with a near impossible endurance challenge. These extreme events were designed to raise awareness for the incredible charities which support childhood cancer; they also offered the means for me to connect with Isla and reflect on the suffering and uncertainty which she has endured.

‘The only rule was that the challenges needed to get tougher each year. A rule I nearly regretted when running 100-mile foot races and swimming in alligator infested lakes!’

This year’s challenge sees Phil, Si, Sonny and Chris rowing two hours on, two hours off nonstop, battling 40ft waves and a lonely Christmas away from their families, all to raise money for Starlight, the national children’s charity who provides play in hospital for seriously ill children. Their target is £50,000 and they have raised just over £22,000 mark.

On Christmas Day, Phil and the team phoned their families in emotional calls on their satellite radios, with Isla asking her daddy if he saw Father Christmas flying overhead.

‘Isla’s cancer battle started with the agony of being beckoned into the “Hospital Interview Room”, where we had our hearts ripped apart and we were left terrified about what lay ahead,’ says Phil.

‘What immediately followed, was an unimaginable deluge of love and support, which drove away the fear, uplifted our spirits and steeled us for the fight ahead. It also allowed us to witness the most humbling and unforgettable outpouring of compassion from our family, friends, colleagues and complete strangers.

‘At the end of Isla’s gruelling treatment for Leukaemia, Starlight granted her wish to meet Santa Claus – in Lapland!

‘After two Christmases spent in hospital, words cannot describe the sheer joy of spending unadulterated precious family moments in a magical place. The absolute privilege and memories will live with us forever.’

This year looked quite different, as the team swapped the traditional Christmas meal of turkey and all the trimmings for apple, cinnamon and raisin muesli for breakfast and a delicious dehydrated lunch.

Phil says his aim was to take on a challenge of such proportions that it genuinely scared him – a challenge where a successful outcome was far from certain.

Which is why he entered the ‘world’s toughest race’, rowing unsupported across the Atlantic Ocean, as part of the 2021 edition of the Talisker Whiskey Atlantic Challenge. The race started in La Gomera on December 12, and requires entrants to row 3,000 miles across the Atlantic to Antigua.

‘The row puts physical demands on my body and mind like nothing I’ve ever done,’ says Phil. ‘It’s utterly relentless.

‘The guys really looked out for me when I was falling asleep on the oars, and when one of us got sea sickness right at the start he powered through and the whole team rallied to support.

‘We came into this hoping to give a good account of ourselves, maybe even win the race, but more importantly come away as firm friends. So far we’re achieving all of those, but it’s still a long way to go to Antigua.’

On day two of their epic adventure, Phil says in a video diary: ‘We’ve officially lost sight of the land and to help me deal with and process this, I’m trying to remember back to Isla’s journey, and I want to try and draw some parallels between this and Isla being treated for leukaemia.

‘In terms of what’s going on so far, last night, the first night on board, I’ve been trying to remember back to Isla’s first night in hospital and how scary that must have been for her. All the strange and unusual noises you hear on the boat, it cast my mind back to all the machines whirling away in the hospital, administering Isla with various drugs and monitoring her.

‘So for now, whenever things get difficult, I just think back to that time and how incredibly tough it was for Isla and I think, you know what? It’s a hard routine, but it’s not that bad.’

Being away from his family is one of the biggest challenges for Phil, and he even missed his eldest daughter Bella’s 11th birthday.

‘We managed to speak though and we all sang happy birthday to her over the phone, says Phil. ‘As a family we’re used to me being away with the RAF, but it’s so tough at this time of year.’

There have been incredible moments too, and Phil has a great appreciation for the natural beauty surrounding him during his journey.

‘The highlight is without a doubt the amazing night sky and the scenery,’ says Phil.

‘I’ve never seen the sky so pitch black that we can see millions of stars more than we’ve ever been able to on land. The milky way is clear and bright like it’s been painted on the sky. We’ve seen shooting stars that fly all the way across the sky.

‘We’ve had a pod of 200 dolphins come and say hello, a pair of minke whales and a turtle even tipped his cap our way. At one point the sea was calm like a millpond, and every oar stroke made bioluminescent splashes in the water, and the moon set on the water with a clear reflection I’ll never forget.’

To support the Atlantic Flyers and help them raise money for seriously ill children in hospital you can visit the team’s online fundraising page.