A former High Court chief justice has slammed the “deliberate cruelty” inflicted on the children of a Tamil family detained on Christmas Island in a warning that Australia must not harm the two young girls to punish their parents.

In a dramatic intervention in a growing row, Sir Gerard Brennan says he is ashamed of the treatment of the family after one of the daughters, Tharnicaa Murugappan, was evacuated to Perth to treat a suspected blood infection. 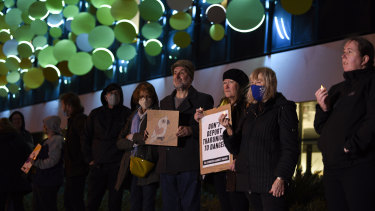 People gathered outside Perth Children’s Hospital for a vigil in support of the Murugappan family.Credit:Marta Pascual Juanola

“Tharnicaa has committed no offence; she presents no danger. Cruelty is being inflicted upon her to punish her parents who came by boat without a visa and thus to discourage others from breaching one of our immigration policies,” he says.

The warning comes as Western Australian Premier Mark McGowan accuses the federal government of an “internationally embarrassing” mistake that should be fixed by letting the family settle permanently in Australia.

But Home Affairs Minister Karen Andrews pushed back on Thursday against calls on her to use her discretion to give refugee status to the four Tamils, known as the Biloela family after the Queensland town where they once lived.

“It’s not a case of being mean,” Ms Andrews told the Seven Network. “I am not going to have people dying trying to come to Australia by sea on my watch. I’m not going to open the gates to the people smugglers.” 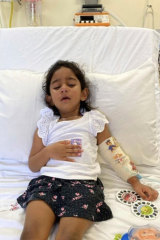 Tharnicaa in hospital on Christmas Island on Sunday, June 6.

Sir Gerard stepped down from the High Court in 1998 and was chancellor of the University of Technology, Sydney, from 1999 to 2005.

The Murugappan parents lost their attempts in the courts to gain refugee status in Australia in May 2019 when the High Court refused them leave to appeal against a Federal Court decision that they should be deported to Sri Lanka.

But the Federal Court decided in February that Tharnicaa had been denied procedural fairness, continuing the legal process over the family’s fate while they ask the government to let them stay.

While Ms Andrews spoke about “a range of resettlement options” such as New Zealand and the United States at a press conference on Tuesday, she clarified on Thursday that she was referring to refugees in general and not the Murugappan family.

Mr McGowan said the government should use its powers to let the family settle in Australia. 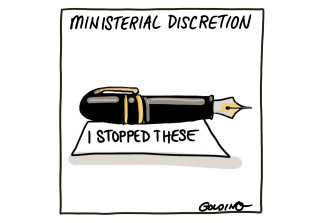 “If that means they need to use one of their exemption powers under the act, just do it, and resolve the issue,” he said.

“We actually need workers in Australia at the moment and to get this very unfortunate and somewhat internationally embarrassing issue behind us.”