Diana: The Musical which was slammed by critics for its ‘hysterically awful’ lyrics FINALLY opens on Broadway – almost two years after its original opening night was delayed due to Covid

The critically derided Princess Diana: The Musical has finally had its Broadway premiere, almost two years after it was originally scheduled to open.

The production has faced fresh criticism today, with the New York Times saying it ‘exploits the People’s Princess’.

It comes after a filmed version of the stage show was lambasted by viewers and critics following its premiere on Netflix last month. 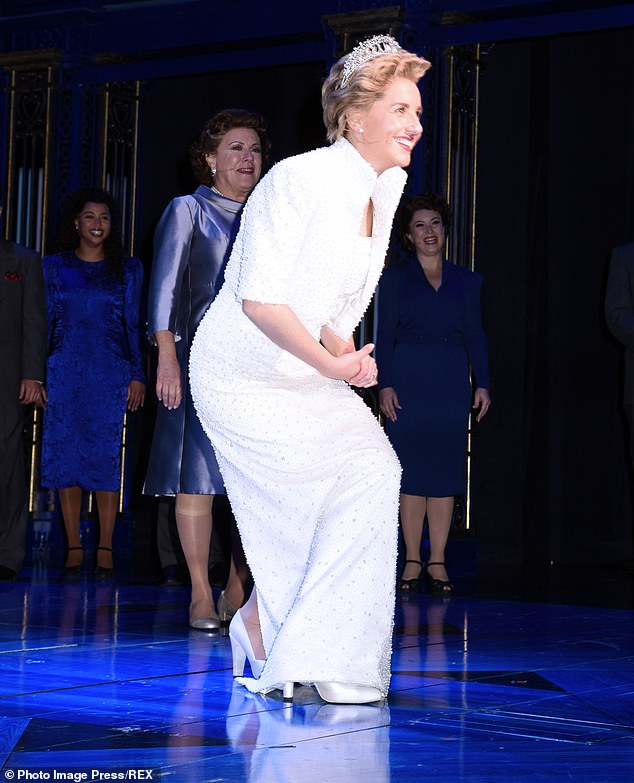 Diana takes her bow! Jeanna de Waal curtsies after the opening night of Diana: The Musical on Broadway. The show returned following a hiatus due to Covid and was met with mixed reviews 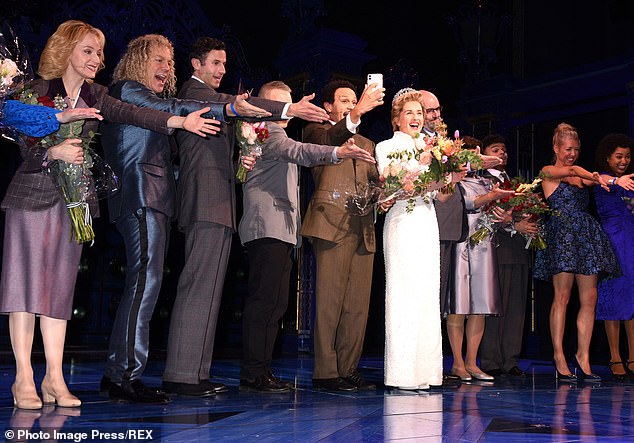 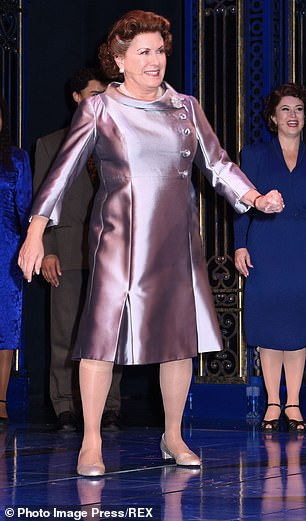 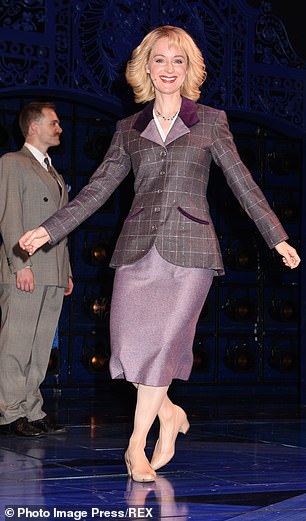 ‘The Queen and Camilla’: The show, created by Joe DiPietro and David Bryan (Bon Jovi’s keyboardist), stars Judy Kaye as the Queen (left), and Erin Davie as Camilla (right) 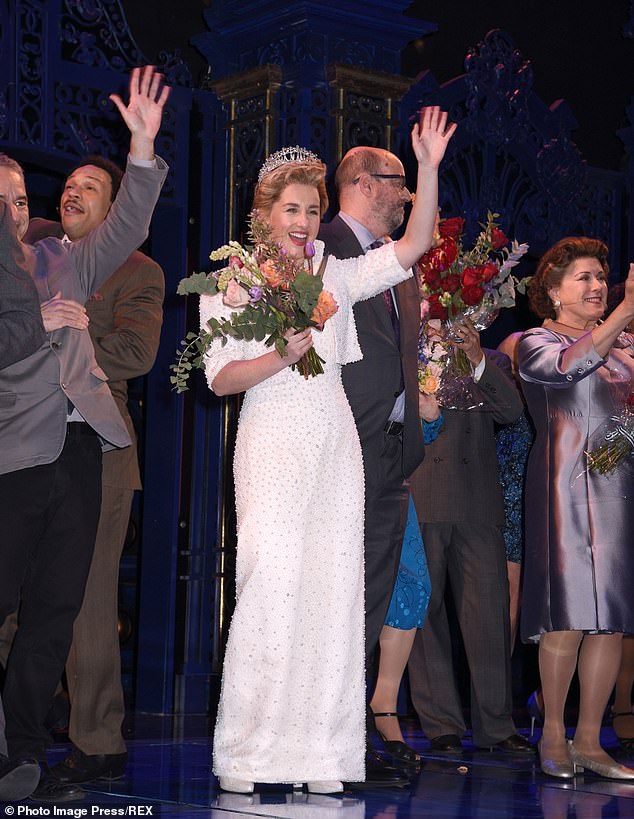 The new musical was roundly slammed over its ‘hysterically awful’ lyrics and ‘absurdly over the top’ production.

The Evening Standard, The Times and the Chicago Tribune gave Diana: The Musical damning one-star reviews, while viewers on social media mocked the ridiculous songs – including a number where paparazzi sing ‘better than a Guinness, better than a w**k/snap a few pics, it’s money in the bank’.

Commentators previously called on Prince Harry, who has an estimated $100million deal with Netflix, to cut ties with the streaming giant over the ‘degrading’ and ‘exploitative’ depiction of his mother and the royal family.

MailOnline’s Dan Wooton wrote: ‘If he fails to speak out against such a horrendous depiction of his mother, then he is tacitly endorsing it.’ 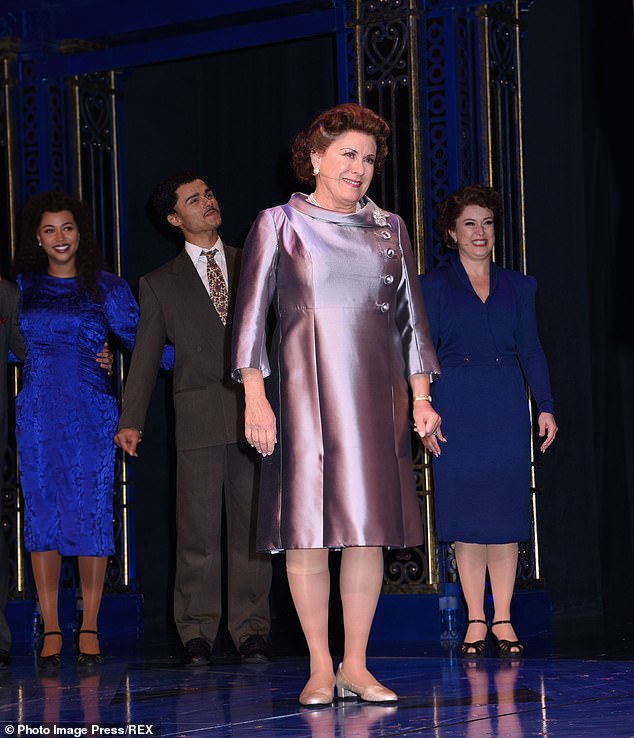 Saving grace: A number of reviews said Judy Kaye as the Queen (pictured) stood out 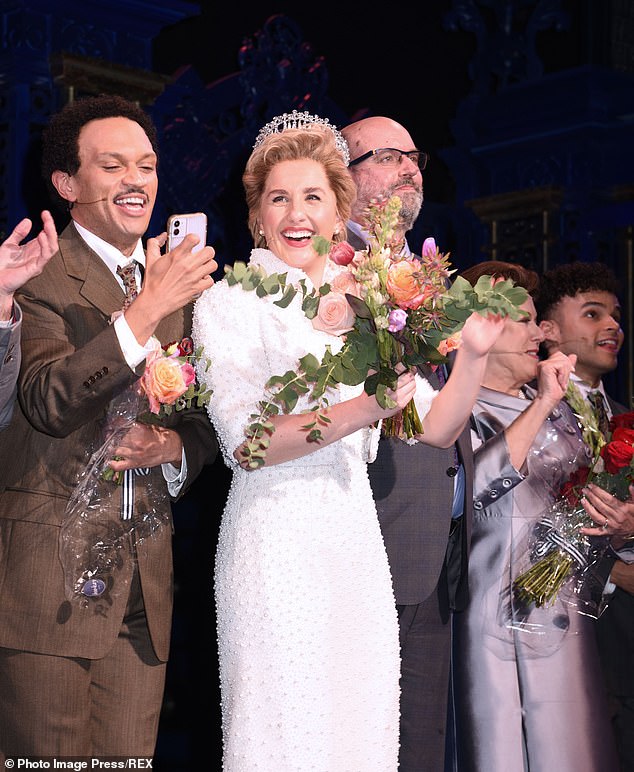 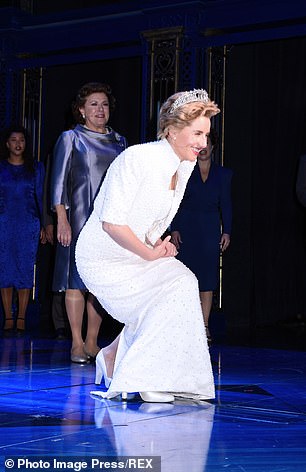 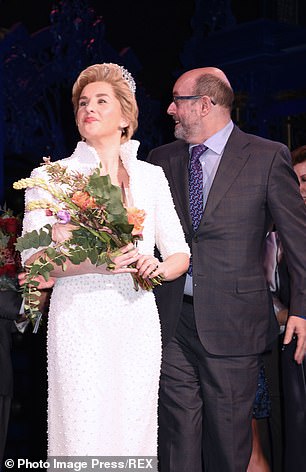 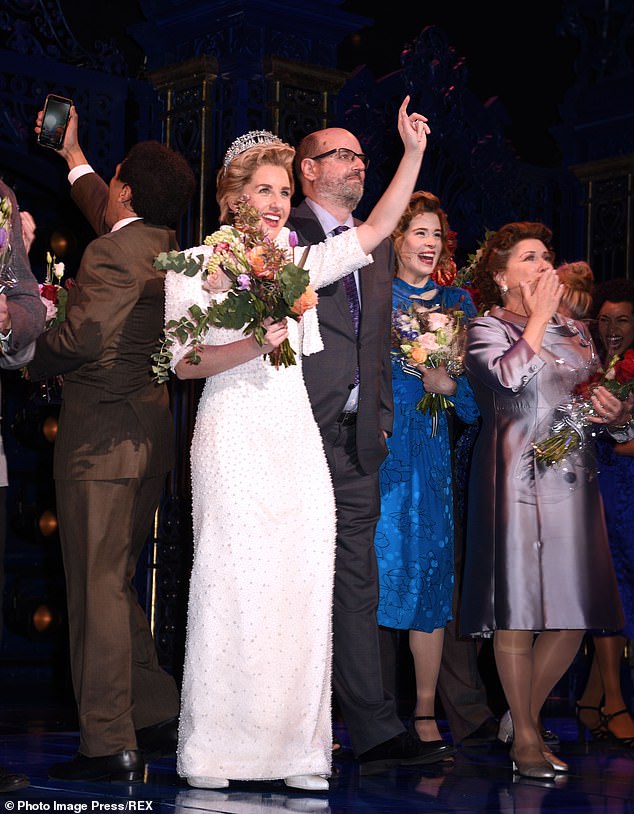 Celebration! The show was met with applause – but has faced harsh criticism from critics

At one point Diana sings how she ‘wishes Charles was Elton John’ before adding: ‘Alright, I’m no intellect/but maybe there’s a discotheque/where the prince could hear Prince and we’d all get Funkadellic’.

Later, she sings to her infant son: ‘​​Harry my ginger-haired son / You’ll always be second to none.’

One of the most heavily quoted lyrics comes from a scene in which Diana crashes one of Camilla’s parties and scandalised guests sing about a ‘Thrilla in Manilla with Diana and Camilla’.

Chorus of onlookers at a party thrown by Camilla (Erin Davie), crashed by her romantic rival: ‘It’s the ‘Thrilla in Manilla’ / But with Diana and Camilla!’

Diana being chased by paparazzi who chant: ‘Better than a Guinness, better than a w**k / Snap a few pics, it’s money in the bank’

Diana, cradling Harry: ‘Harry, my ginger-haired son / You’ll always be second to none.’

A man dying of AIDS sings to Diana: ‘I may be unwell, but I’m handsome as hell.’

Diana lamenting: ‘Serves me right for marrying a Scorpio.’

A miserable Diana singing: ‘I could use a prince to save me from my prince.’

At a concert with Prince Charles, Diana warbles: ‘Alright, I’m no intellect/but maybe there’s a discotheque/where the prince could hear Prince and we’d all get Funkadellic’. 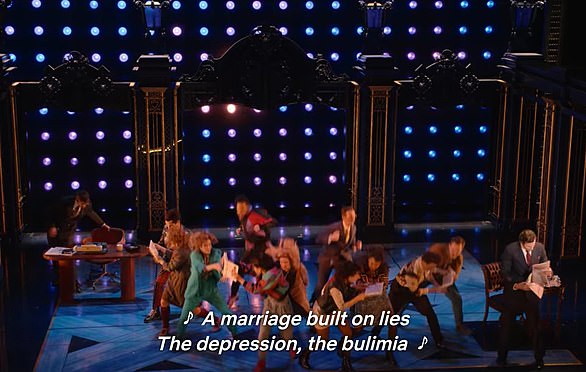 Shocking: A screenshot reveals one of the crass lines from Diana: The Musical

As Vanity Fair’s Richard Lawson notes, the lyrics are not ‘meant to be silly and campy’, despite how they might read on paper. ‘They are just the stilted, embarrassingly serious ramblings of a show that has no interest in real humanity.’

de Waal, who has said it is a ‘huge privilege’ to play the princess, was criticised for the ‘lack of nuance’ within her performance, with several comparing it to Kristen Stewart’s powerhouse take on the princess in upcoming film, Spencer.

Others have questioned the accuracy and tone of the musical, with Wootton writing: ‘Diana: The Musical is the most offensive and degrading portrayal of the late Princess of Wales in fiction since her death in 1997 – and in terms of accuracy it makes that other historically-derided Netflix series The Crown look like a royal encyclopaedia of truth.

‘The lies about Di’s life are egregious – from suggesting she used HIV patients for publicity to attacking Margaret Thatcher for her politics.’ 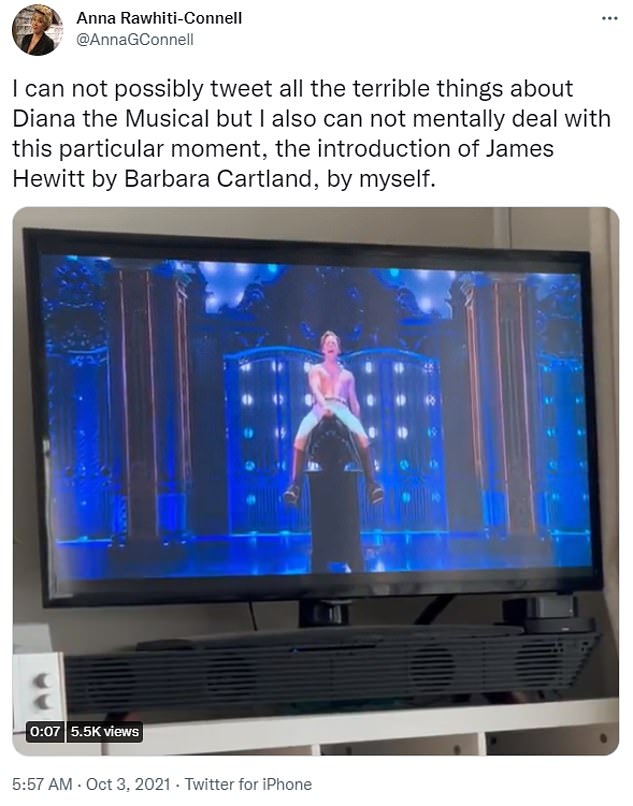 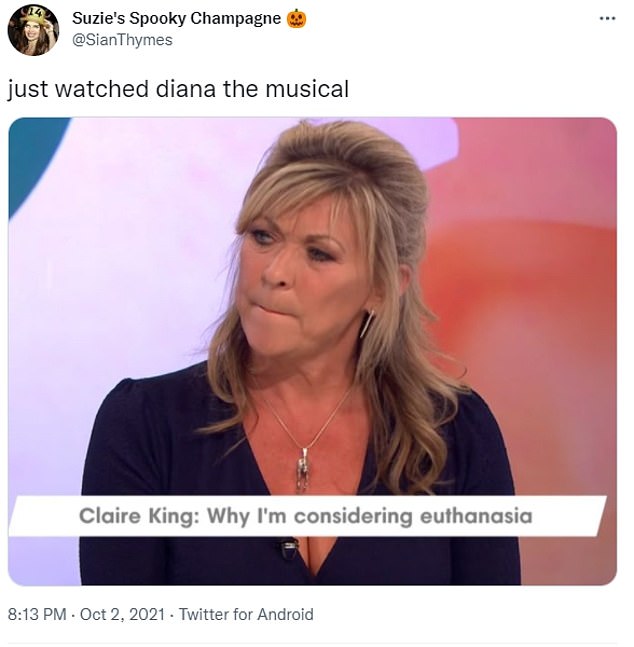 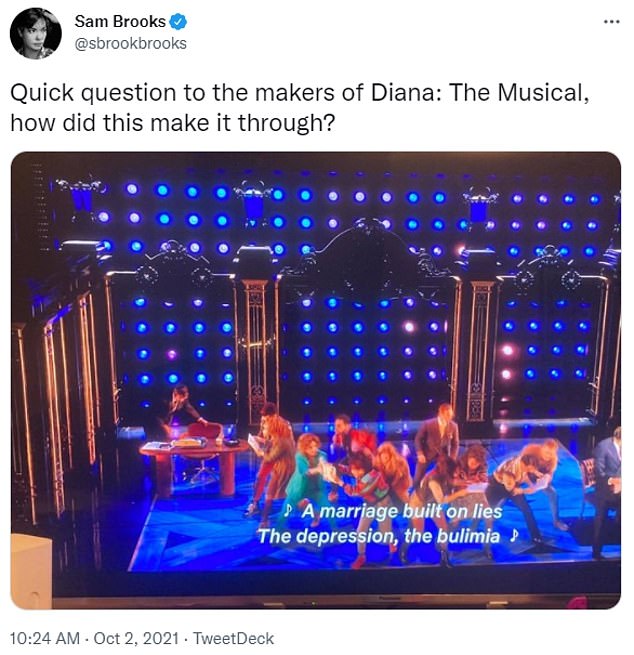 Viewers have taken to Twitter to mock and criticise the musical, with several blasting the lyrics

The criticism has been echoed by viewers, who took to Twitter to mock the production.

One tweeted: ‘I just watched the first 20 minutes of Diana the musical to wind down after preview 2 and I am so tired I think I am hallucinating. Can people please confirm this is actually a thing because it is like a fever dream.’

Another posted: ‘All you need to know about the Diana musical on Netflix is that it has a song that contains the lyrics “it’s a thrilla in Manila with Diana and Camilla”.’

A third added simply: ‘Whoever decided to create “Diana the Musical” on Netflix made a HORRIBLE mistake #DianaTheMusical.’

Here, a snapshot of what the critics had to say…

Jessie Thompson writes: ‘The whole thing feels like the result of someone who read Tina Brown’s The Diana Chronicles on a sunlounger, semi-p****d on margaritas while listening to Aerosmith. Actually, no, that makes it sound quite good…

‘Camilla (Erin Davie) hangs around every scene like a ghost at the feast; the show’s attitude to her and Charles is summed up in one hysterically unsubtle lyric – “he’s a third rate Henry VIII and she’s Godzilla”.

‘Worse still are the shlocky lyrics, which made me feel like I was being bludgeoned over the head by a commemorative crockery set.

‘They go from the lamentable – “Feel the groove, even royals need to move” – to the nonsensical – “Hearts bend, break, burst and sever”… do they? Hearing the words “Jaaames Hewitttt” sung in the manner of Meatloaf made me honestly wonder if I was on acid.’

Michael Phillips writes: ‘Diana: The Musical is a hunk of Wensleydale cheese now streaming on Netflix, and in this case the “r” in “streaming” is optional…

‘Already “Diana: The Musical” has drawn slack-jawed quality comparisons to the film version of “Cats.” But “Cats” was different — dubious material handled badly, a compilation of misjudgments and digital fur. This one’s a matter of shoddy material staged efficiently and fluidly by director Christopher Ashley, aided by a solid cast of pros swimming upstream, trying hard not to mentally rewrite librettist and lyricist Joe DiPietro’s words with every stroke…

Clive Davis writes: ‘[It] really does plumb new depths. DiPietro — whose new show, What’s New Pussycat, opens at Birmingham Rep this month — has said he did not aim to be “campy”. Yet what else can you make of a venture that goes so absurdly over the top?

‘Jeanna De Waal captures Diana’s shy glance, but there’s not much else she can do with a cardboard cut-out, while Judy Kaye’s portrayal of the Queen seems to be channelling Hyacinth Bucket. Roe Hartrampf makes a simpering Charles; Erin Davie turns Camilla Parker Bowles into the Wicked Witch of the West.

‘When she and a vengeful Diana come face to face at a fancy dinner, you wouldn’t be at all surprised if DiPietro and Bryan staged a bout of mud-wrestling. That said, they do give us James Hewitt as a bare-chested, jodphur-wearing sex god.’

Marianka Swain writes: ‘”A fairy tale born in Hell.” That’s the nuanced take on Princess Diana’s marriage in this redundant soap opera-meets-rock opera, which would be in bad taste were it not so dull. It seems a bizarre choice for Netflix, which is premiering a filmed version of this new musical ahead of its Broadway opening in November – unless the intent is to make The Crown look even better by comparison.

‘Unlike that garlanded drama, Diana: The Musical sprints from courtship to her death in under two hours, like a hyperactive Wikipedia page.

‘There’s no time for thoughtful characterisation or dialogue; instead, everyone helpfully blurts out their current emotional state. It’s the mood ring school of writing.’

Stuart Heritage writes: ‘What a genuinely bizarre work of art this is… You could stick a pin in almost every song and pull out a line that makes the whole endeavour feel like it was specifically created as a berserk prank against the world.

‘My particular favourite is the moment when Diana looks into a crib and tenderly sings: “Harry, my ginger-haired son / You’ll always be second to none.”

‘But others might prefer the part when the Queen belts out a song about Prince Charles’s inability to keep it in his pants, or the song that appears to be called A Thriller in Manilla with Camilla.’

Andrzej Lukowski writes: ‘Really, it’s not bad at all. Ultimately the only thing I was left slightly struggling with was the exact point: DiPietro’s central thesis is to portray Diana in a positive, uplifting light as a woman who overcame adversity to find and better herself: “I choose happiness, I choose a fresh new start” she sighs, radiantly, near the end.

‘But if you’re somebody who struggles to find the British monarchy especially interesting, there’s maybe a sense of consequentiality missing here.

‘Conversely, if you think her too-short life was a bitter tragedy, you may be taken aback by the largely upbeat mood. Still, it’s good-natured fun with a big heart, probably best enjoyed after a couple of white wine spritzers.’

‘The show, from writer Joe DiPietro and musician David Bryan (of Bon Jovi fame), positions itself as something revelatory, and is advertised as a peek behind the curtain to see what really happened when young Diana Spencer married Prince Charles. It does nothing of the sort. Anyone who has watched Netflix’s The Crown or, I don’t know, briefly skimmed a Wikipedia article will already know pretty much everything that’s clumsily explicated in the musical…

‘The musical claims to be telling this story so that we may better understand Diana, to see her as a person, not just an icon. But the production exists entirely to exploit her legacy, to crassly run us through a recitation of known events (and fashion moments) in order to extract more money out of the whole sorry circus.’

Peter Debruge writes: ‘The one-dimensionality of this portrayal reveals how little we truly understood about the woman’s inner world. Gaps left by tabloids were filled in part by Andrew Morton’s controversial biography, based largely on input from Diana herself — a process depicted here in the show’s catchiest song, “The Words Came Pouring Out.”

‘But so many secrets remain unrevealed, and the rest relies heavily on speculation. Diana’s divorce was considerably more complicated than Bryan and DiPietro make it out to be, and she dies abruptly one song later — not “Candle in the Wind,” alas.

‘Experiencing the musical on screen makes “Diana” feel all the more inadequate, since closeups call for a more nuanced performance than de Waal is prepared to give.’