Santa Paws! Dogs dress up in Victorian Christmas-themed outfits as they compete to be top dog in pooch pageant in Yorkshire

A parade of canine lovers showed off their handiwork today by dressing their pooches up in fancy dress for a dog pageant in Yorkshire.

Mutts of all breeds, shapes, and sizes were entered into the event, in a bid to be crowned top dog.

Among the entrants were Barney the Beagle, dressed as a chimney sweep, Mia the Cocker Spaniel, fashioning a lavish red and white seasonal-appropriate dress, and Pomeranian Tallulah, decked out in a faux fur-trimmed festive frock with diamante detailing. 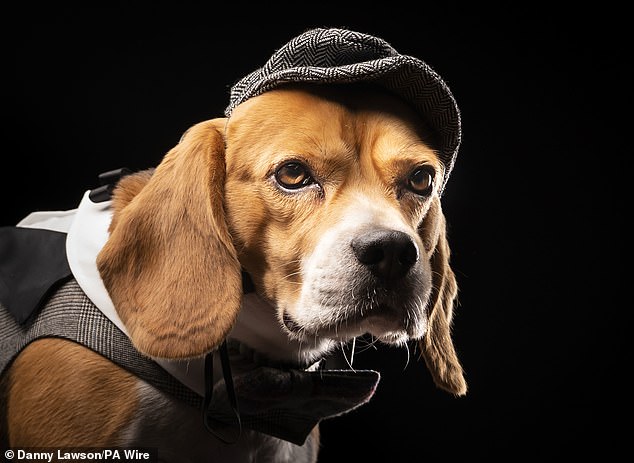 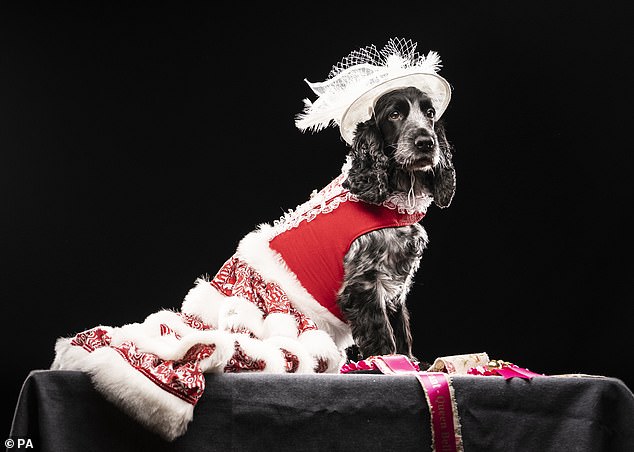 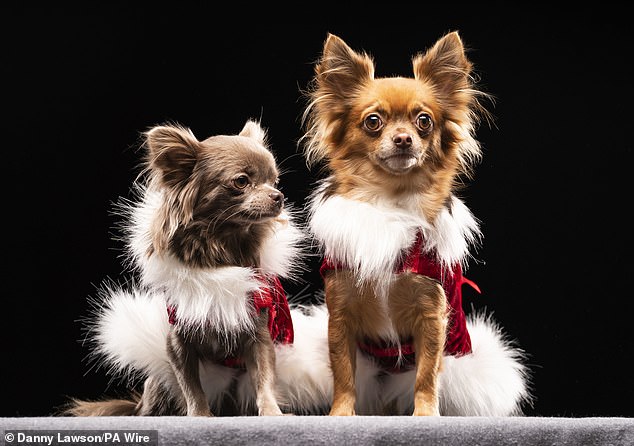 Pup-arazzi: Chihuahuas Minnie (left) and Rosie (right) pose for the cameras as they show off matching fur-trimmed gowns 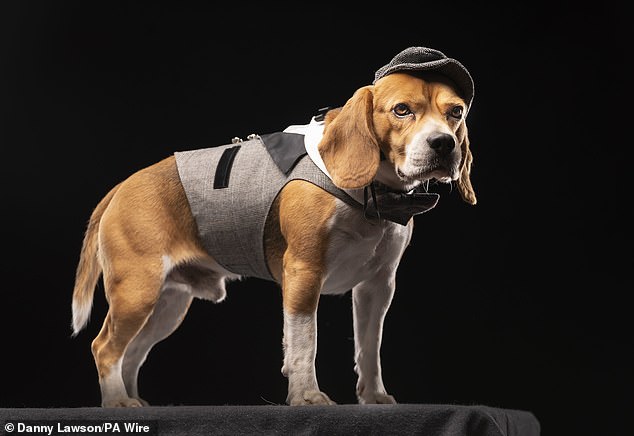 Beagle Barney’s outfit is a nod to chimney sweeps, whose services were often at peak demand in the run-up to Christmas 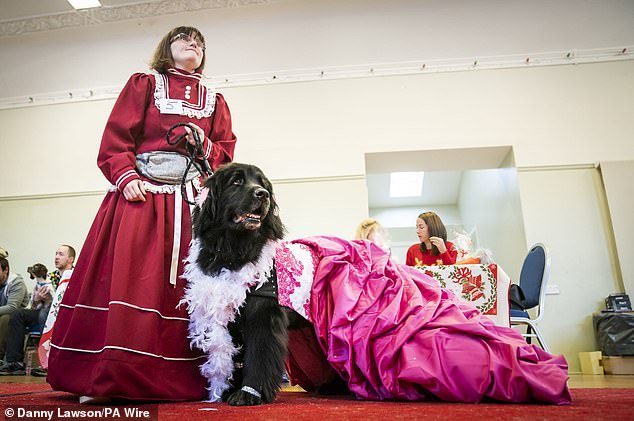 A woman and her pooch in their fetching complementary outfits, decked out respectively in burgundy and fuchsia 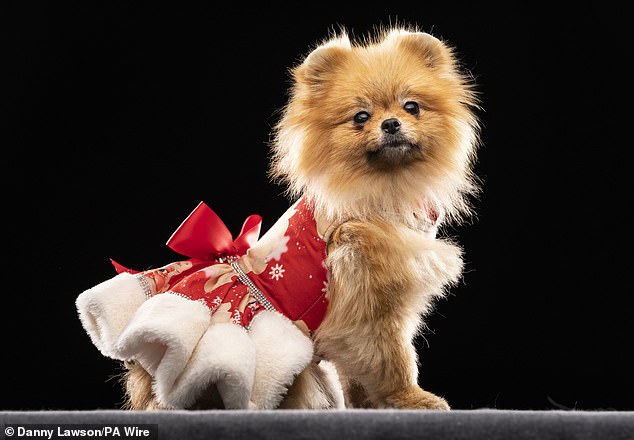 Another standout entrant was Keisha the Keeshond, who was dressed as the ghost of Christmas present, one of the characters from Charles Dickens’ famous novel A Christmas Carol.

Her human Michelle Parker created a lavish frock featuring layers of tulle, which was trimmed in pale blue faux fur, and completed with a crown in the shape of icicles.

And the dogs weren’t the only ones wearing fancy outfits; some of the humans donned themed garments too.

A few dog lovers were snapped sporting seasonal outfits to complement what their precious pooches were wearing. 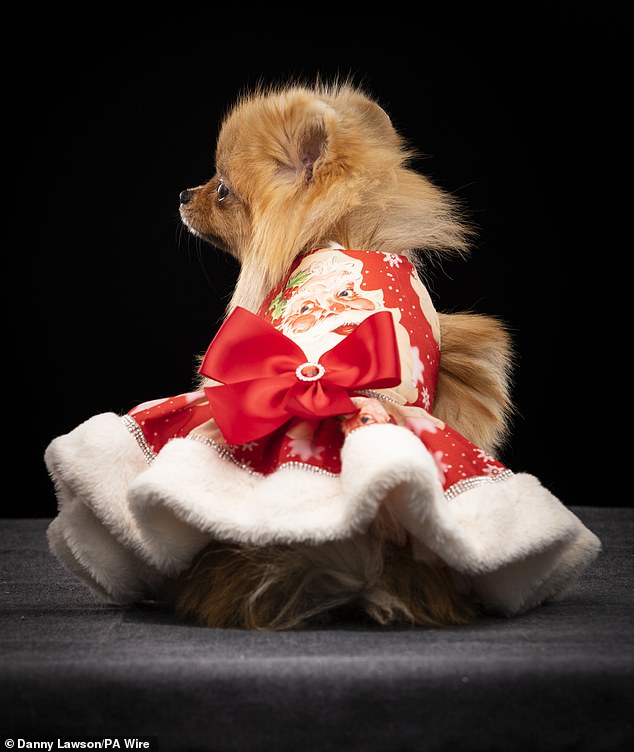 Dog owners went to great lengths to ensure their canine costumes were on point. Tallulah the Pomeranian’s dress features a detailed image of Father Christmas 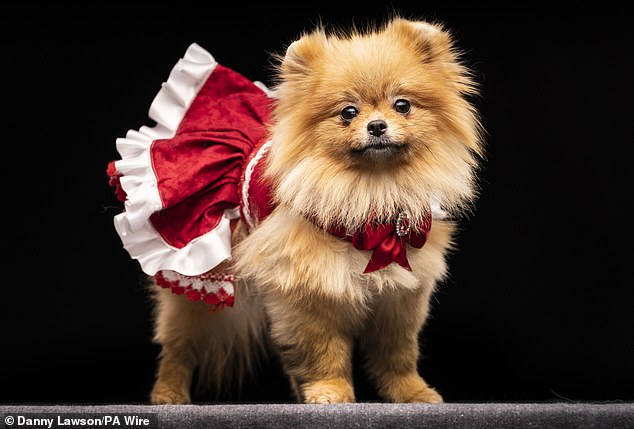 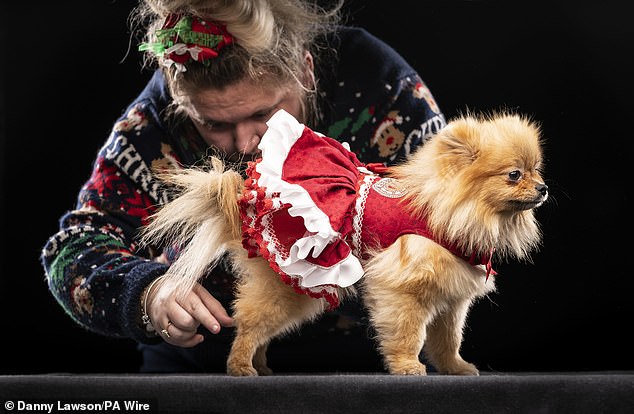 Amy Sullivan, pictured here with Tallulah, the Pomeranian, also embraced the seasonal spirit, donning a Christmas jumper as she attended the event 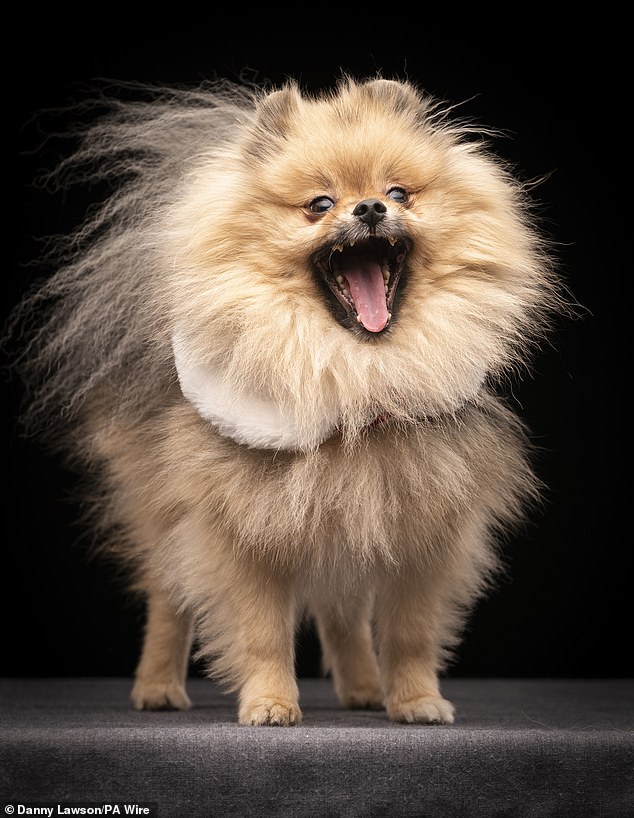 A dog’s life: Mr Darcey, the Pomeranian, yawns during the event at Collingham Memorial Hall in Leeds 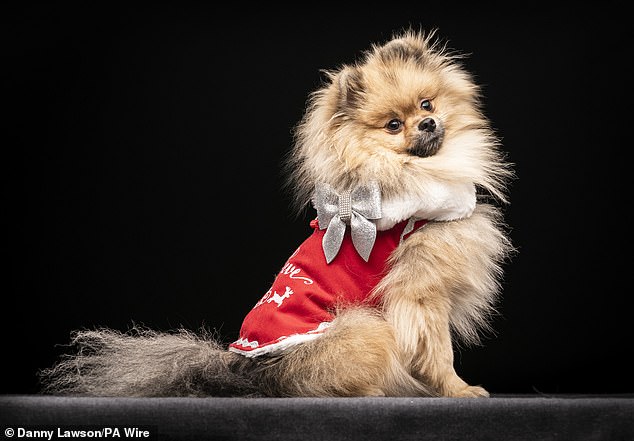 Pomeranian Mr Darcy channels the composure of his literary namesake, posing proudly in his red coat and silver bow 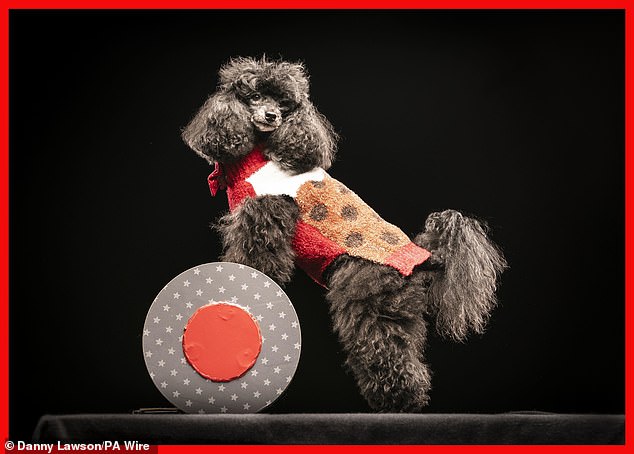 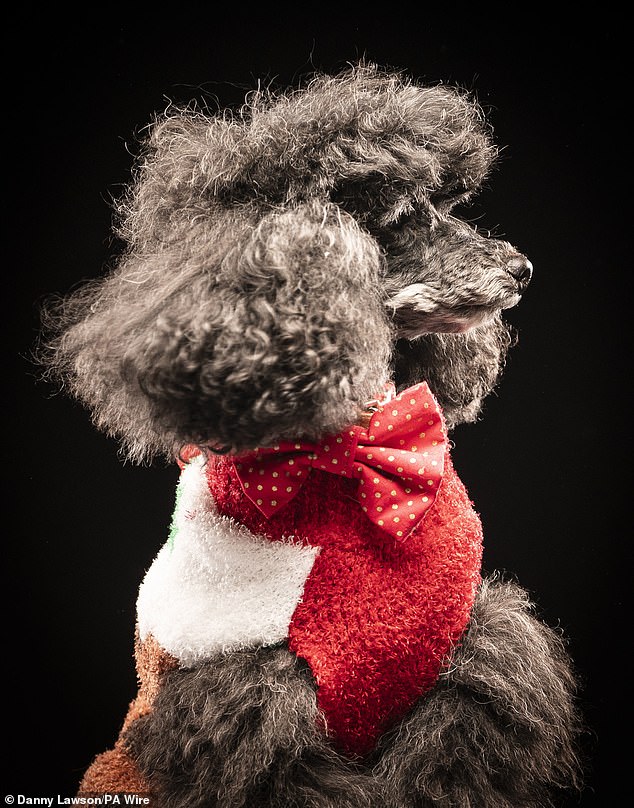 Ready for your close-pup? Toy poodle Anton was just one of many well-dressed pooches at the Christmas edition of the dog pageant 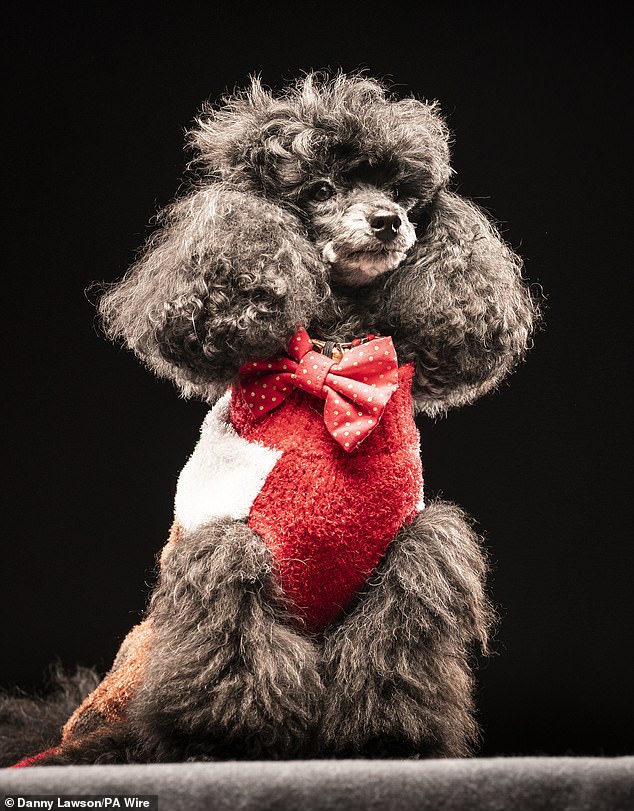 The well-coiffed pup poses patiently as he has his paw-trait taken, showing off his dapper bowtie in all its glory 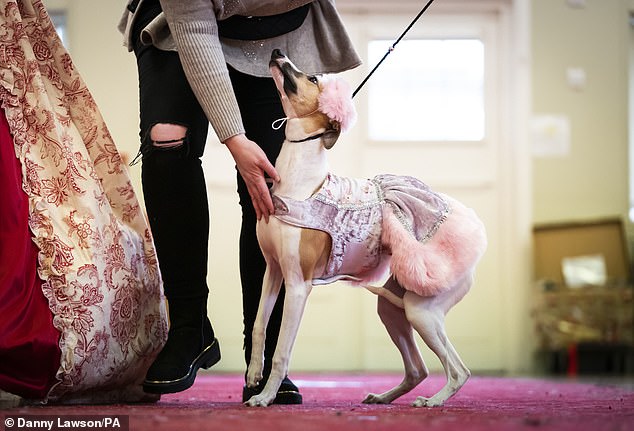 One of the dogs was snapped wearing a lilac and pastel pink dress, topped off with a pink ruffled hat

Pet owners paid a £1 entry fee per person into the hall, with every pound being deposited going to the no meat charity.

They were advised that if their dog wasn’t a fan of dressing up, they could use a Christmas patterned harness, bandanna and or a hat instead.

People walked their animals down the catwalk in front of the panel of four judges, and answered a random question about their four-legged friends.

Contestants were marked out of 20 on judges first impression, the presentation of theme, creativity, overall appearance, and response to the judges’ question. 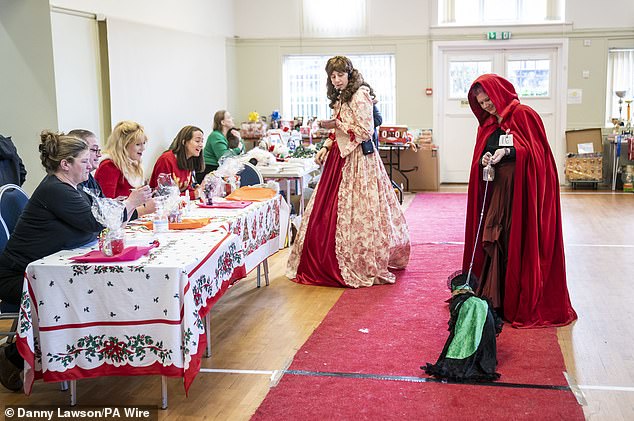 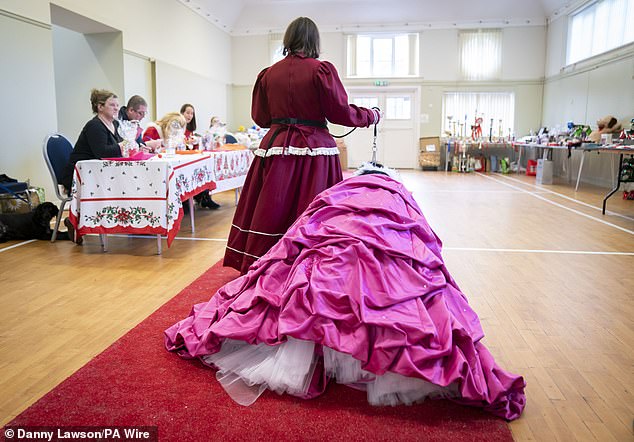 Best fur-ends: A woman and her dog wait to take their turn in front of the watchful eyes of the judging panel 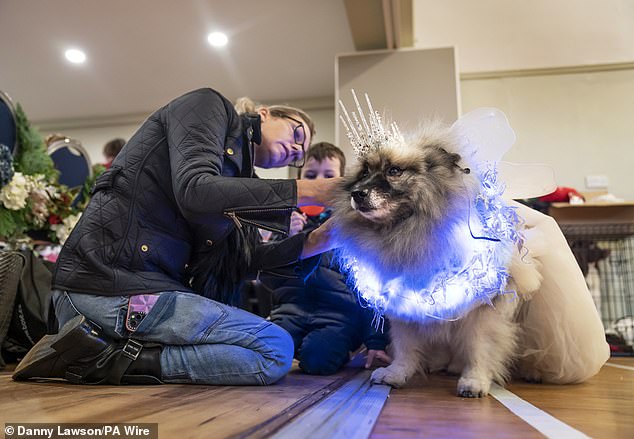 Michelle Parker with Keisha the Keeshond, who is dressed as the ghost of Christmas present, one of the characters from Charles Dickens’ famous novel A Christmas Carol 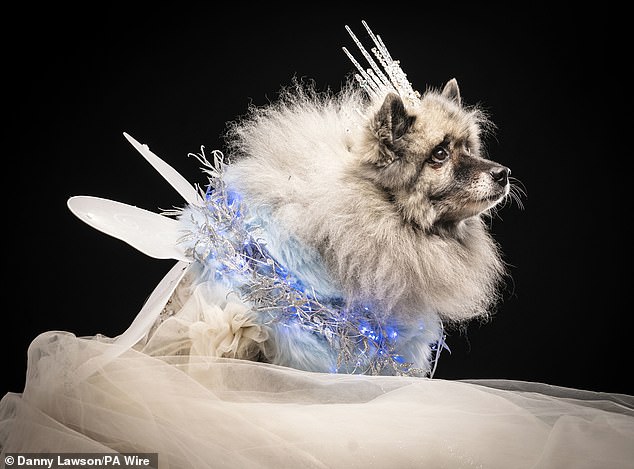 Keisha the Keeshond in her intricate costume featuring lavish layers of white tulle, and faux fur in pale blue 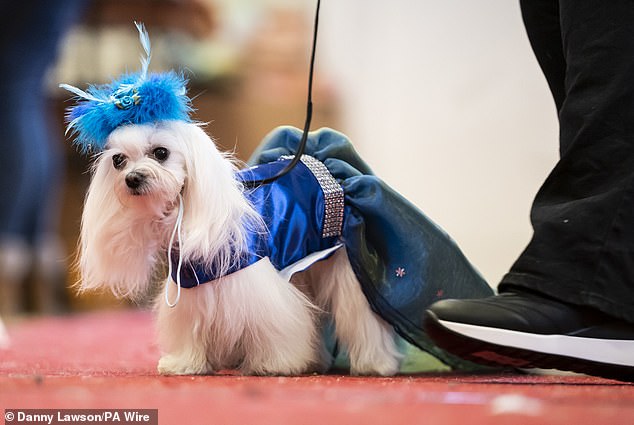 Missy the Maltese took to the red carpet sporting a blue frock with a studded silver belt, and a feathered headpiece 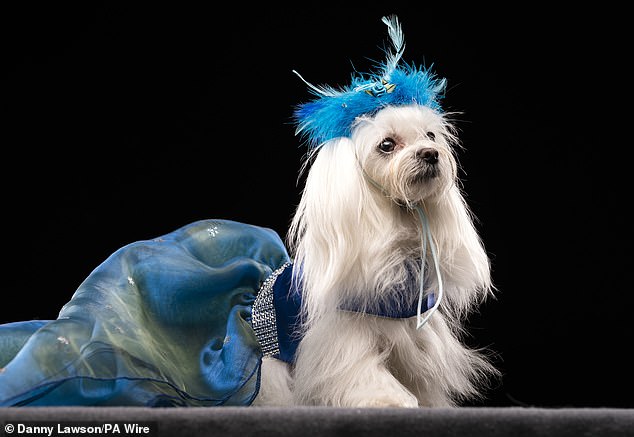 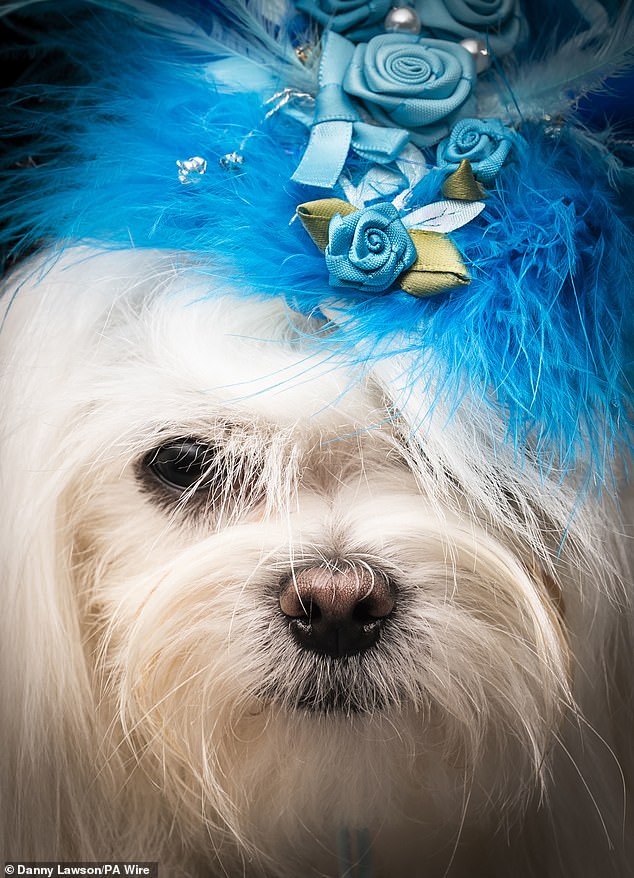 Topping off her outfit, Missy sported a headpiece decorated with feathers, pearls, and fabric roses crafted from blue satin

Today’s event, which follows several earlier pageants, was supposed to be held last December, but was postponed due to Covid restrictions.

Writing about the pageants on their Facebook page, they said: ‘Come to the best pageant in the UK, where furbabies stands for fun.’

Describing the event as ‘the first doggy beauty pageant show born in the north of England’, they called on people to ‘come give us a try.’