Sydney and Melbourne property prices have defied predictions of double-digit falls, instead rising over November as low interest rates and grants for new home buyers sent housing approvals to their highest levels since the millennium began.

Every capital city and region in the nation saw property prices rise in November, bringing the national median dwelling value up 0.8 per cent to $565,474, CoreLogic data released on Tuesday shows. Every city showed a bounceback in values the month before except for Melbourne, which was grappling with slowing second wave outbreaks of coronavirus. 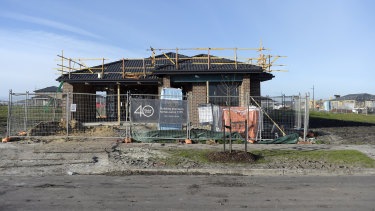 While overall prices remain below where they were in March, on the current trajectory there could be a full recovery by February 2021 for most cities. Melbourne is down 5 per cent from its peak and will take longer, CoreLogic head of research Tim Lawless said.

House prices have been rising faster than apartments, but Melbourne units have so far been resilient. Melbourne apartment prices increased 0.7 per cent in November, but there was a 0.7 per cent decline in Sydney. House prices jumped 0.6 per cent and 0.9 per cent for these capital cities respectively.

"We suspect the stronger trend in Melbourne unit values relative to houses could be short-lived unless overseas migration turns around sooner than expected," Mr Lawless said. "This trend towards stronger conditions in detached housing markets is evident across most of the capital cities."

The strongest performing capitals for dwelling prices over November were Darwin and Canberra, both up 1.9 per cent each. Property prices have now hit record highs in Brisbane, Adelaide, Hobart and Canberra.

At the height of the pandemic, banking economists were tipping double-digit price falls in Melbourne and Sydney over the next two years. Since then the worst-case scenario for unemployment and the spread of the virus has not eventuated and tens of thousands of home owners who took mortgage holidays have resumed repaying their loans.

The NAB now expects rises of 5 per cent in 2021 and 6 per cent in 2022. "We expect that lower interest rates for an extended period will be a key support to the housing market over the next couple of years, seeing a boost to prices across the country," NAB chief economist Alan Oster said.

The Reserve Bank slashed interest rates to a record low 0.1 per cent in November, down from 0.25 per cent, in a move to kickstart growth in the economy after the coronavirus-induced recession. Another boost to the property and housing construction sector is the federal government's $25,000 HomeBuilder grant for newly built homes and major renovations. The grant was extended on Sunday into the first three months of 2021, at the lower rate of $15,000, and more flexibility was provided in terms of price caps and timelines for building. The Morrison government estimates this will support an extra 15,000 home builds, bringing the total to 42,000.

Housing approvals in October reached their highest levels since the start of the millennium, Australian Bureau of Statistics shows, with the surge in dwellings driven by NSW and Western Australia.

But AMP Capital chief economist Shane Oliver warns there are some negatives in the outlook as unemployment remains high. Standard & Poor's is tipping home loan arrears to start surfacing in Australia in the second half of 2020, with losses in 2021, but says it will vary by location with tourism and leisure sectors most affected.

Dr Oliver said the eventual withdrawal of federal government support and mortgage holidays from the major banks and a hit to demand for houses due to a slowdown in immigration would be among the factors hurting the housing market's future prospects.

"It remains hard to see that the reversal in net immigration from around 240,000 people per annum to an expected net outflow of people this financial year … won't have a significant impact," Dr Oliver said.