The Australian economy is expected to be back to its pre-pandemic size by the end of 2021 but the Reserve Bank is warning of a rocky recovery that will be dominated by unemployment, a shortage of hours for those who want more and flat wages growth.

In its quarterly monetary policy statement released on Friday, the bank upgraded most of its forecasts while in effect ruling out negative interest rates to help buoy the economy in coming years. 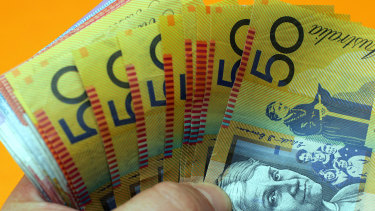 The RBA expects the economy to do better this year than feared but jobs and wage rises will remain thin on the ground over the next two years.Credit:James Davies

"This would bring GDP back to its end-2019 level by the end of 2021, but leave it well short of the path expected prior to the outbreak of the pandemic," the bank said. "The recovery can be expected to be bumpy and uneven, and highly sensitive to further virus outbreaks."

The bank had feared unemployment would reach 10 per cent by year's end but now expects it to peak just under 8 per cent. By the end of 2022, however, the jobless rate is forecast to still be at 6 per cent while under-employment is also expected to be elevated.

Employment growth is expected to remain soft as people who left the jobs market during the pandemic start to look for work and support such as the government's JobKeeper wage subsidy are wound back.

About 30 per cent of businesses have frozen the wages of their staff, with another 25 per cent expected to do so. Wages are expected to grow by only 1 per cent through 2020-21 and 1.5 per cent next financial year.

The RBA believes households, buoyed by federal government support, will go on a spending spree as restrictions aimed at stopping the spread of the coronavirus are removed.

Government spending is also pivotal. Public demand is expected to grow by 6 per cent in the 12 months to the end of December, offsetting a 14 per cent drop in business investment and a 12 per cent fall in housing investment.

The forecasts take into account the Morrison government's October budget and RBA decisions this week, including the cut in the official cash rate to a record low of 0.1 per cent and a $100 billion bond-buying program, which it started on Thursday with $2 billion of purchases.

There have been calls in some quarters for the bank to follow the lead of several other countries' central banks in cutting the cash rate below zero, but the RBA made clear that was not on its agenda.

"The (bank) board considers that there is little to be gained from short-term interest rates moving into negative territory and continues to view a negative policy rate as extraordinarily unlikely," it said.

The biggest risk remained another domestic outbreak of the coronavirus that required a Victoria-like shutdown of a state or territory. The bank said ultimately any economic recovery was tied to the pandemic being brought under control.

"The economy will have a large output gap over the forecast horizon as evidenced by an elevated unemployment rate. This means that wages growth and underlying inflation will stay very low," he said.

Get our Coronavirus Update newsletter for the day’s crucial developments at a glance, the numbers you need to know and what our readers are saying. Sign up to The Sydney Morning Herald’s newsletter here and The Age’s here.