Defence Minister Peter Dutton says federal Labor won’t stand up for Australian values in the face of Chinese attacks and accused it of “crab-walking” away from the AUKUS defence agreement in the angriest dispute between the two major parties over foreign policy in years.

Mr Dutton on Tuesday lashed Opposition foreign affairs spokeswoman Penny Wong for delivering a “very irresponsible” and “embarrassing” speech in which she argued the Defence Minister was hyping up the threat of war over Taiwan for domestic political advantage. Senator Wong hit back late on Tuesday to say Mr Dutton was lying about her speech and Labor backed the AUKUS deal. 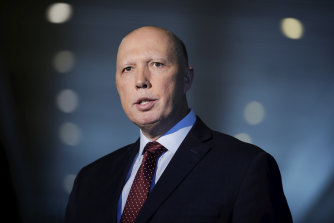 Mr Dutton said Senator Wong should have denounced China’s acting ambassador in Canberra for attacking the AUKUS defence agreement and in doing so had failed to stand up for Australian values.

“I think the Labor Party has demonstrated, just as they did on boats… when they get into government, they go weak at the knees,” Mr Dutton said.

“Penny Wong has demonstrated today, already, that the Labor Party has gone weak at the knees, and we’re not even through the election.

“The acting [Chinese] ambassador is attacking Australian values… and Senator Wong wasn’t standing up for those values.”

Mr Dutton suggested Senator Wong’s speech was evidence that Labor “has a very different position when it comes to the alliance” with the US.

Senator Wong responded by saying Mr Dutton was “proving my point by lying about what I said in my speech today, lying about Labor’s position on AUKUS and ANZUS, and abandoning long-held bipartisan foreign policy positions”.

“Labor supports AUKUS, we support ANZUS, and we are sticking to the long-held bipartisan position on Taiwan, even if Mr Dutton is walking away from it,” she said.

Labor leader Anthony Albanese and Senator Wong have said they support the AUKUS agreement with the US and Britain, including a proposal to build nuclear-propelled submarines for Australia. But Labor has been increasingly airing its concerns about a potential capability gap with the submarines not to enter service until as late as the 2040s.

In her speech to the National Security College in Canberra, Senator Wong also accused Mr Dutton of being “wildly out of step” with the US after he declared it would be “inconceivable” that Australia would not join in an American operation to defend the island.

For decades, Australia has followed the US’s policy of “strategic ambiguity” towards Taiwan – meaning they do not state publicly whether they would defend it in the event of an attack by China, which regards Taiwan as a renegade province.

Mr Dutton denied he was ditching a policy of strategic ambiguity, saying he was being realistic about the Chinese Communist Party’s ambitions. “You don’t deter an adversary and you don’t maintain peace in our region from a position of weakness,” he said.

Mr Dutton said Senator’s Wong speech “could have been written by Paul Keating”, referring to the former Labor prime minister who has been critical of the government’s policies in standing up to China.

“It was such a sop to Paul Keating, it was quite embarrassing,” he said.

“The fact is that we have a very serious situation in the Indo-Pacific… the Chinese Communist Party has a presence in 20 different locations in the South China Sea, they’re butting up against the Japanese shipping vessels in the East China Sea.

“And there are many other points that you can identify in our region and around the world where there is concerning actions by the Communist Party of China.”

“Driven by selfish political gains, he has repeatedly made provocations, sensational and astonishing statements on China-related issues,” Mr Zhao said.

“He wouldn’t scruple to hijack Australia onto the chariot in confrontation with China. His real intention has been exposed to all.”