Repatriation flights from India will resume “as soon as possible” after the federal government’s mandated three-week pause, with Labor calling for purpose-built quarantine facilities to be built in every state and territory to help bring more Australians home.

There were meetings of both national cabinet and the country’s health ministers on Friday as the deep crisis in India continued, with confirmed infections topping 18 million and almost 205,000 deaths, with a record 380,000 cases and 3645 deaths on Thursday. 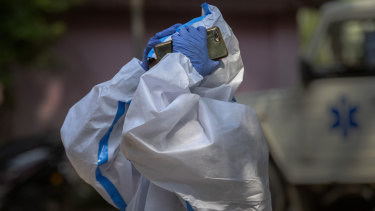 A mourner cries during the cremation of a person who died from COVID-19 in India. All flights from India to Australia have been halted for at least three weeks.Credit:AP

Australia is sending 1000 non-invasive ventilators and 100 oxygen concentrators and tanks to India on May 5, and is willing to send 2000 more ventilators if needed. While Australia has also offered to send personal protective equipment, India’s most urgent need was oxygen supplies.

UNICEF India representative Dr Yasmin Ali Haque, who is based in Delhi, said the number of cases and deaths was most likely under-reported as the country’s health system had been “stressed and stretched” by the second wave of the pandemic.

“India went from probably four labs in the country that could do COVID testing, and it was ramped up to over 2000. And even that is not enough now,” she said.

For those who do not die in a hospital, or have death certificates signed by a doctor, their deaths are not counted in the COVID-19 tally, Dr Haque said.

There are now 48 cases of COVID-19 in Darwin from quarantine, and all but one are in people who have returned from India.

It’s the highest caseload of COVID-positive patients the Howard Springs facility has managed so far, and flights from India have been paused until May 15 so the Northern Territory system would not be overwhelmed.

But federal Health Minister Greg Hunt said the pressure was easing on quarantine, and national cabinet was focused on restarting flights as soon as the number of cases in quarantine eased.

“National cabinet was focusing on repatriation flights – they are commencing as soon as possible after May 15, as well as commercial [flights],” Mr Hunt said on Friday afternoon.

Work to expand the Darwin site is also expected to be completed in mid-May, with arrivals set to reach 2000 per fortnight by June.

“It is time for the Prime Minister to commit to national standards for hotel quarantine,” Mr Albanese said on Friday morning.

Mr Hunt said it was hard to find a quarantine system anywhere in the world that had offered better protection than hotel quarantine.

“There is no question that hotel quarantine is protecting Australians, and it is bringing them home in large numbers,” he said.

Around the world about 34,500 Australians are registered with the Department of Foreign Affairs and Trade as wanting to come home. The country with the largest number of registered Australians is India, with 9000 people wanting assistance to return. About 650 of those are listed as vulnerable.

In India, UNICEF normally focuses on child health, but Dr Haque said the organisation was now working on helping to enhance testing capabilities and providing other essential medical equipment in many states across India. The organisation has launched an appeal for assistance with the COVID crisis.

Australia needed to offer more assistance to India, Mr Albanese said, but also offer more support to the thousands of Australians who have registered as wanting to come home.

Mr Hunt said he would not pre-empt any decision on financial support to those Australians, and the question of vaccinating citizens overseas was difficult.

Get our Coronavirus Update newsletter for the day’s crucial developments and the numbers you need to know. Sign up to The Sydney Morning Herald’s newsletter here and The Age’s here.