France’s Culture Minister has spoken out in defence of controversial new movie, Cuties.

Roselyne Bachelot, 73, who was appointed by French president Emmanuel Macron on 6 July, said the movie by Maïmouna Doucouré was being criticised for elements that have been taken out of context.

The film, which is available on Netflix, follows the story of Amy, an 11-year-old girl who joins a group of dancers who imitate the dance moves of today’s pop stars.

It has been at the centre of a controversy since the streaming giant released a poster of the young girls striking suggestive poses. 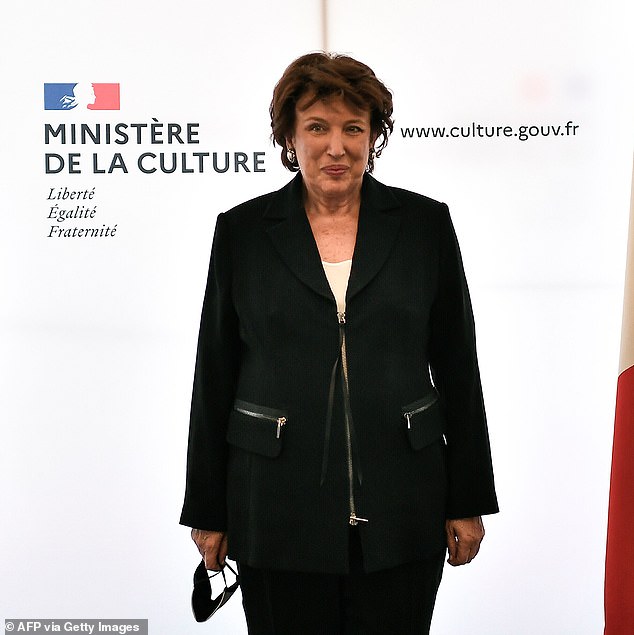 France’s newly appointed Culture Minister Roselyne Bachelot has spoken out in defence of the controversial movie ‘Cuties,’ which has been accused of sexualising young girls (pictured on September 1 in Paris)

Before the movie was even released, some suggested it painted pre-teens in a hypersexualised way, with others worrying about whether it was encouraging paedophilia.

As a result, the director received online abuse and the hastag #cancelNetflix started trending on Twitter.

Addressing the controversy in an official statement, Bachelot, along with France’s delegate to gender equality Elisabeth Moreno, said the criticisms against Maïmouna Doucouré were in total contradiction with her intentions.

‘The violent criticisms targeting the movie “Cuties” give its director an intention which is in total contradiction with what her work is really about,’ she commented. ‘They are based on reductive images that were taken out of context.’

She and Moreno went on to object to the growing number of people asking for the movie to be removed from Netflix. 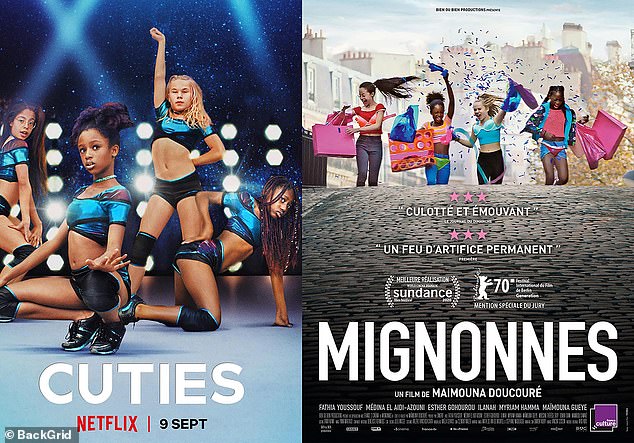 Netflix has apologised for sharing a poster that was seen as suggestive (left) when first marketing the movie to their international audience. Right: the original poster which was shared in France and on IMDB

‘This movie needs to remain accessible to all audiences, and to feed an appeased debate based on an enlightened exploration of the work,’ they said in the statement.

Explaining the true meaning of her movie during a discussion panel in France, she said the girls were re-creating the suggestive dance moves and poses performed by singers in pop culture.

‘The hyper-sexualisation of children happens through social media and social media is everywhere. People [at Sundance] agreed with that,’ she said. 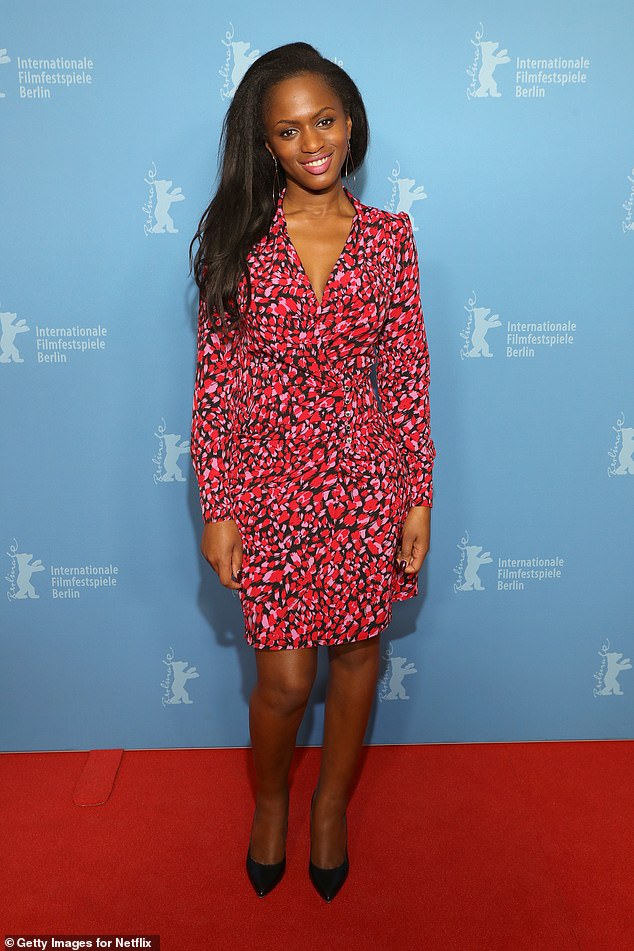 Cuties director Maïmouna Doucouré told how the movie had meant to discuss the hypersexualisation of young girls, not encourage it (pictured at the Cuties Netflix premiere in February in Berlin)

She went on to add that the controversy was born out of the issues people took with Netflix’s chosen poster to market the movie.

‘The controversy started with that artwork… The most important [thing] is to watch the film and understand we have the same fight,’ she explained.

‘What I want to do is to open people’s eyes on this issue and try to fix it. It’s important and necessary to create a debate and find solutions as filmmakers, politicians, and within the educational system.’

While director Maïmouna Doucouré said she was stunned by the outrage and that the the poster was ‘not representative of the film’, anger and calls for it to be dropped remained.

Cuties tells the story of an 11-year-old Senegalese Muslim girl named Amy, and, according to the director, it is meant to depict the struggle of ‘many children who have to navigate between a liberal western culture and a conservative culture at home’. 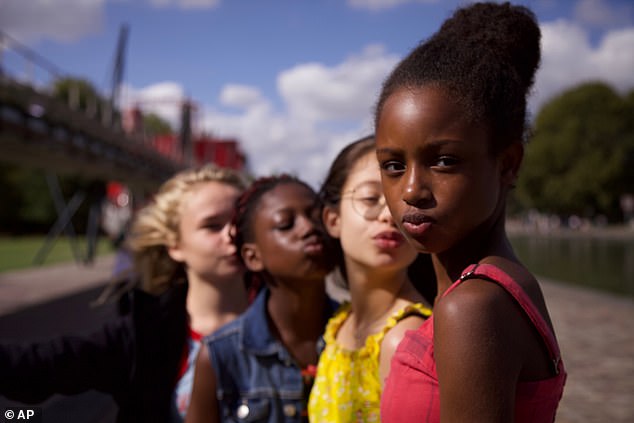 The movie follows Amy, an 11-year-old girl from a Senegalese family who joins a group of carefree dancers (pictured)

However, while publicising the movie, Netflix chose to focus almost solely on Amy’s participation in her school dance team and their quest to ‘twerk their way to stardom at a local dance contest.’

An online petition was launched in August calling on people to cancel their Netflix subscription in light of its decision to host the movie.

In stark contrast, the original poster for the movie – which has been used on other sites like IMDB – depicts the youngsters on a shopping trip.

Netflix has since issued an apology for the trailer and poster, which features skimpy outfits.

‘We’re deeply sorry for the inappropriate artwork that we used for Cuties,’ a Netflix spokesperson said in a statement at the time.

In the movie, the group of girls c an be seen trying different provocative dance moves which some have said hypersexualised them

Some people called to ‘cancel Netflix’ on Twitter, claiming Cuties was encouraging pedophilia and the sexualisation of young girls

‘It was not OK, nor was it representative of this French film, which premiered at Sundance. We’ve now updated the pictures and description.’

Doucouré also received a phone call from the streaming site’s co-CEO Ted Sarandos, who made a personal apology for the error.

‘We had several discussions back and forth after this happened. Netflix apologized publicly, and also personally to me,’ the director said. .

While the streaming site accepted full responsibility for the blunder, the damage was already done, with both Doucouré and her movie facing furious attacks from thousands of outraged viewers.

She revealed she even received death threats after the ‘hyper sexualised’ poster and trailer went online.