A gender-neutral student who has spent almost £50,000 on Botox, fillers and cosmetic surgery to look like a doll has hit back at critics, saying: ‘Looking like Barbie doesn’t make me stupid.’

Patrick Mast, 25, from Frankfurt, Germany, who was born male but no longer identifies as either gender and uses the pronoun they, has been having cosmetic procedures since the age of 18.

Claiming to be addicted to the pain of them, the business management student has monthly lip filler injections, Botox every four months and has had a nose job and blepharoplasty, to achieve the appearance of rounder eyes.

Currently single following a divorce, Patrick is hoping to meet an open-minded man who is comfortable with plastic surgery – but has had to deal with many cruel critics over the years. 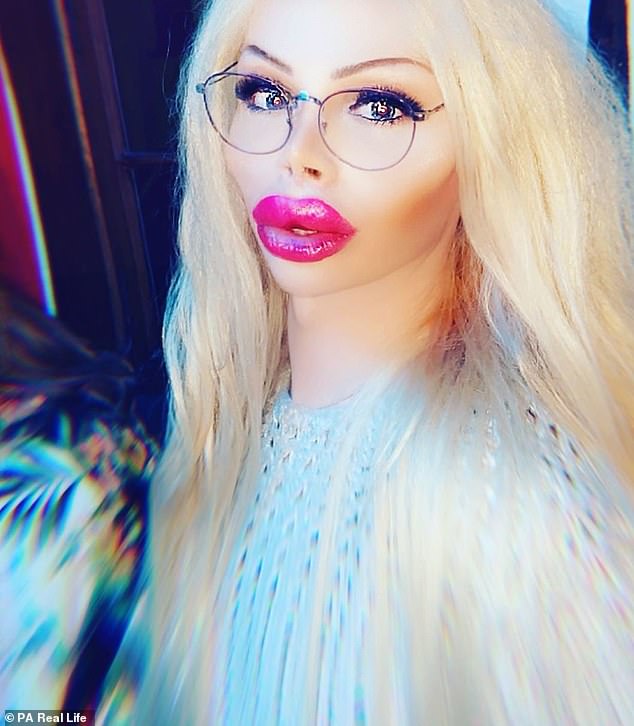 Patrick Mast, 25, (pictured) from Frankfurt, Germany, who has splurged almost £50,000 on cosmetic surgery since the age of 18, has blasted critics 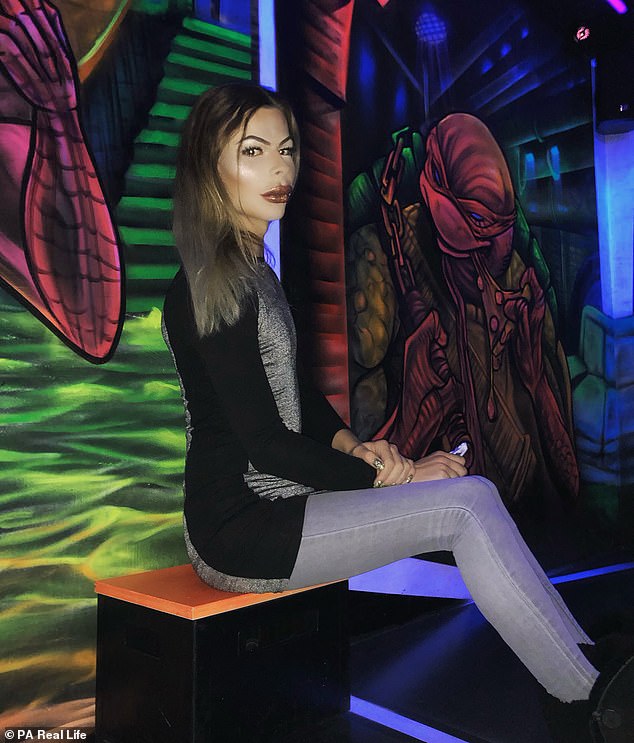 Gender-neutral student (pictured) has been assumed to be stupid by others, because of Barbie like appearance

‘I like the attention I get after I have a procedure,’ said Patrick.

‘But not all of that attention is positive. I’ve been told I look like a monster, but at the end of the day, everyone has the right to look how they want.

‘My look causes much more of a problem for other people than it does for me.

‘The surgery is my decision and the consequences are mine to live with.

‘I do find that people assume I’m stupid because I look like Barbie. If they took the time to speak to me, they’d realise that I’m actually quite normal and intelligent.’

Having Botox for the first time as a teenager, Patrick’s look has changed drastically in the seven years since.

Pleased with the results of that initial procedure, an obsession with all types of fillers was soon sparked. 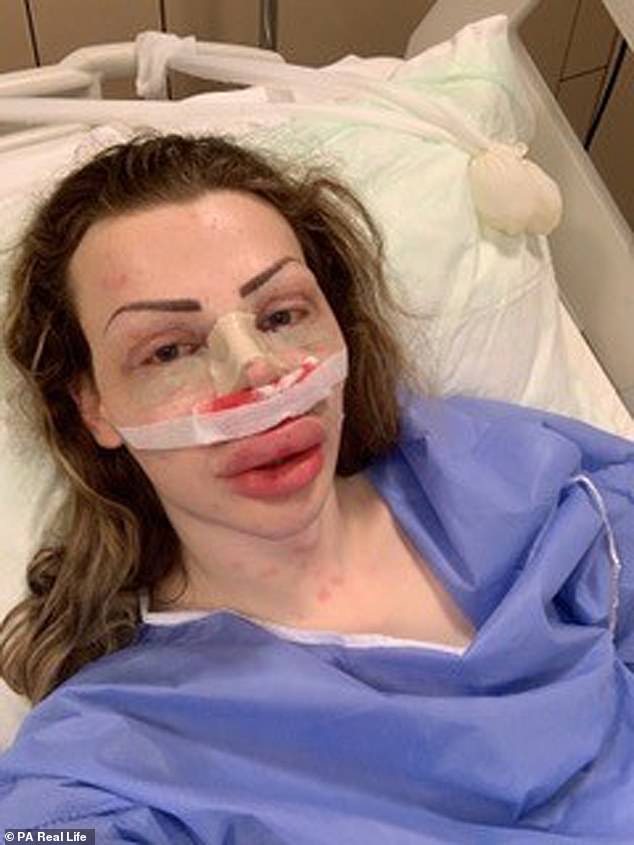 The 25-year-old (pictured after a nose job) said they love the artificial look, growing up those who’ve had lots of surgery looked wealthy 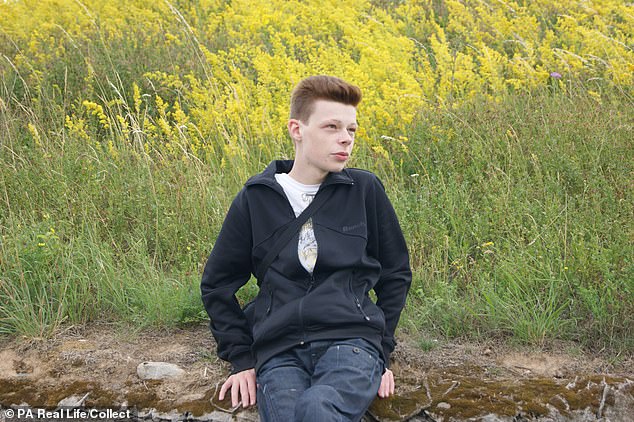 Patrick (pictured before surgery) who had upwards of 20 lip fillers in 2019, flew to Turkey for a nose job that gives the appearance of a small Barbie-style nose

Patrick continued: ‘I just love the artificial look. Growing up, I would see people who have had lots of surgery and think how wealthy they looked, like they really took care about themselves.

‘Ultimately, I am going for the doll-like, expressionless look.’

In 2019 alone, Patrick who has had upwards of 20 lip filler treatments, had several Botox injections, a blepharoplasty, where excess fat or skin is removed from the eyelids, a nose job and laser surgery to remove freckles.

‘I found a doctor online in Istanbul, Turkey, who specialises in small Barbie-style noses,’ Patrick said.

‘I thought, “That’s the doctor for me”. So in March, I flew from Germany to Turkey for the operation. I also had a lip lift at the same time, to reduce the gap between my upper lip and my new nose. 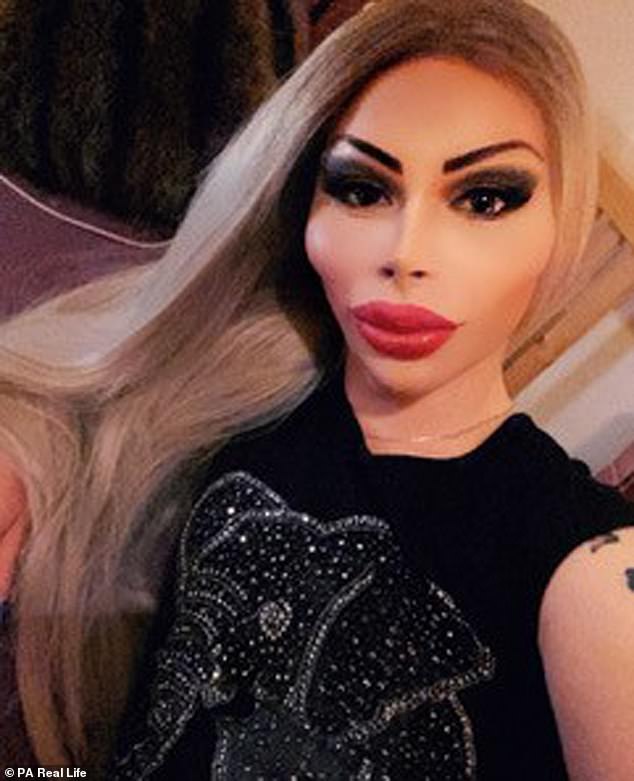 Patrick (pictured) is currently eyeing up bum implants and teeth veneers, as they vow to continue having surgery until ‘plastic perfection’ is achieved 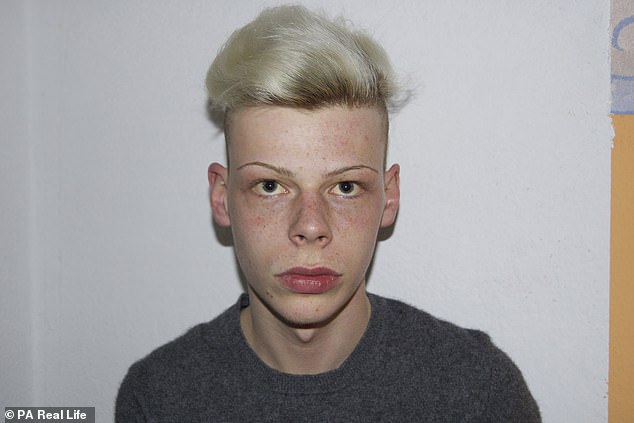 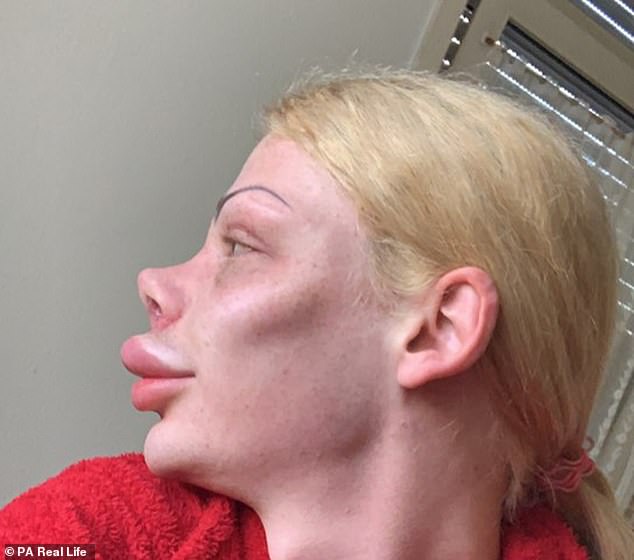 Patrick (pictured) who has no plans to stop having surgery, said they have Botox and fillers as and when they are needed

‘I spent seven days in Turkey recovering, then flew home. I was really pleased with the results.’

The 25-year-old is currently considering bum implants and teeth veneers, and has vowed to continue having surgery until ‘plastic perfection’ is achieved.

Patrick continued: ‘I have no plans to stop having surgery and go au naturel. I have Botox and fillers as and when I need them.

‘I’ll look in the mirror and spot something I don’t like about my face, or a wrinkle that needs removing.

‘I love the look because it’s exciting knowing how many possibilities there are in terms of new surgery and techniques, and how much you can change your appearance. 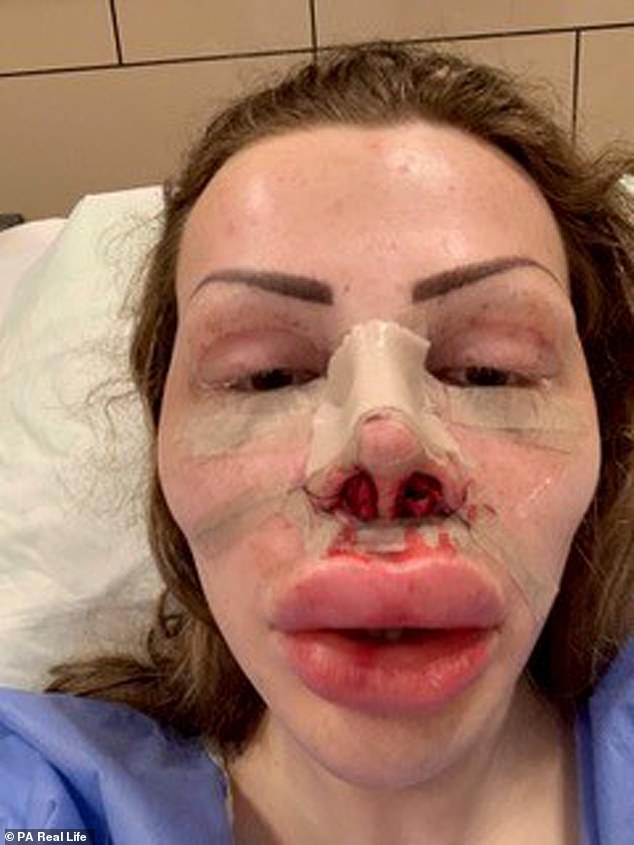 Patrick (pictured after a nose job) revealed they’re willing to try any procedure, and is considering enhancing their bum by having a fat transfer or implants 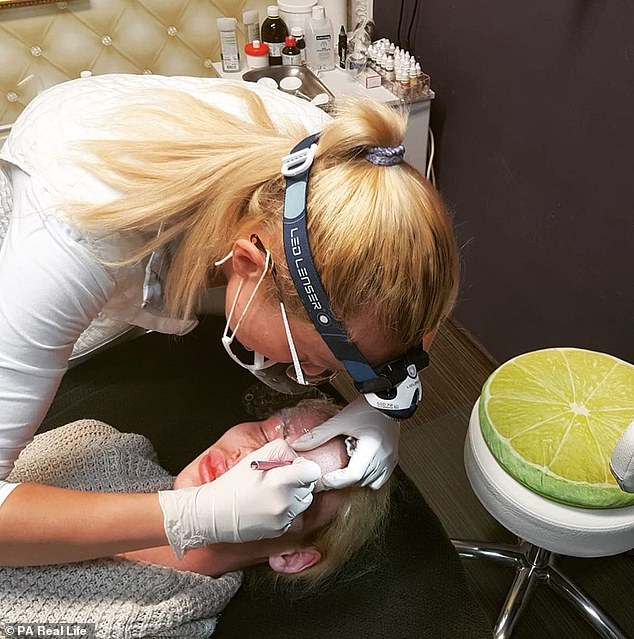 ‘I’m willing to try any procedure. Next, I’d like veneers to give me a bright white smile, and something to make my booty a little bigger.

‘This can be done by taking fat from elsewhere in the body, but as I’m very skinny, I don’t have much fat to spare, so I’m looking into implants instead.’

Offering advice to other surgery fanatics, Patrick has stressed the importance of conducting thorough research and speaking to people who have been treated by doctors themselves, rather than solely relying on online reviews, which can be faked.

While admitting that potential partners can be put off by the Botox and fillers, the student is happily single for now, as it means no one can talk them out of having more work done. 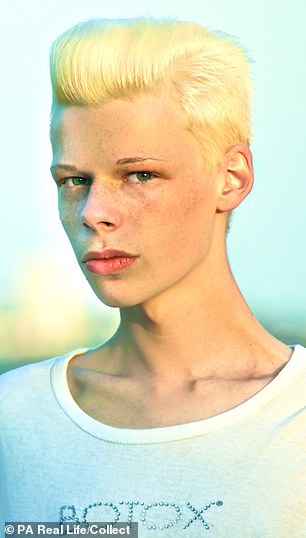 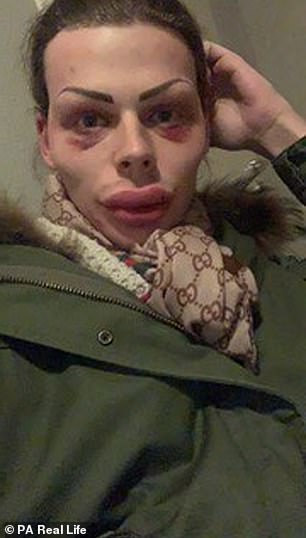 Patrick (pictured before surgery) said although they’re dating at the moment, they are happy to not have anyone telling them not to change themselves 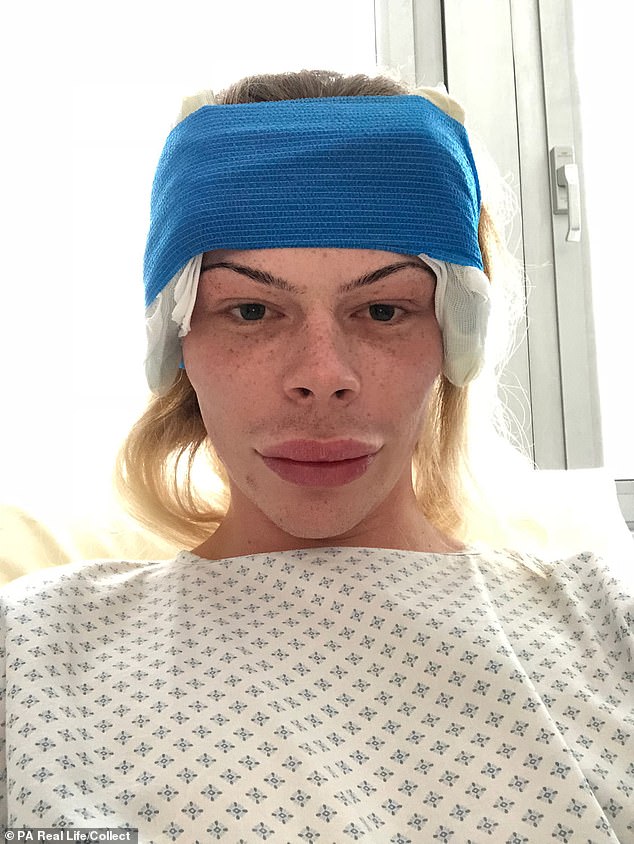 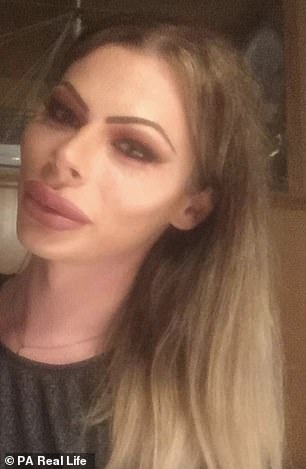 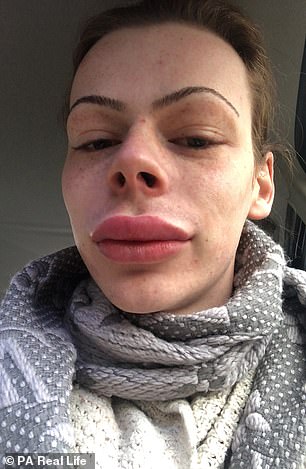 Patrick (pictured) revealed they also support the natural look, despite their love of surgery

Patrick added: ‘I am dating at the moment, but I feel free being single, as there’s nobody to tell me not to change myself.

‘I think my look can make serious relationships quite difficult. It’s fine for casual dating and one-night stands, but people can be judgemental about surgery and make lots of assumptions about the kind of person you are if you’ve had it.

‘Some men may also struggle with the attention I get for my look. I hope one day I can find someone open-minded, but my personality is more important than my appearance.

‘Yes, I may personally love surgery, but I also like and support the natural look.

‘We all have to do what makes us happy, and surgery is something that completely depends on the person.

‘But if you don’t love yourself it is difficult for someone else to love you, and surgery is helping me with that.’ 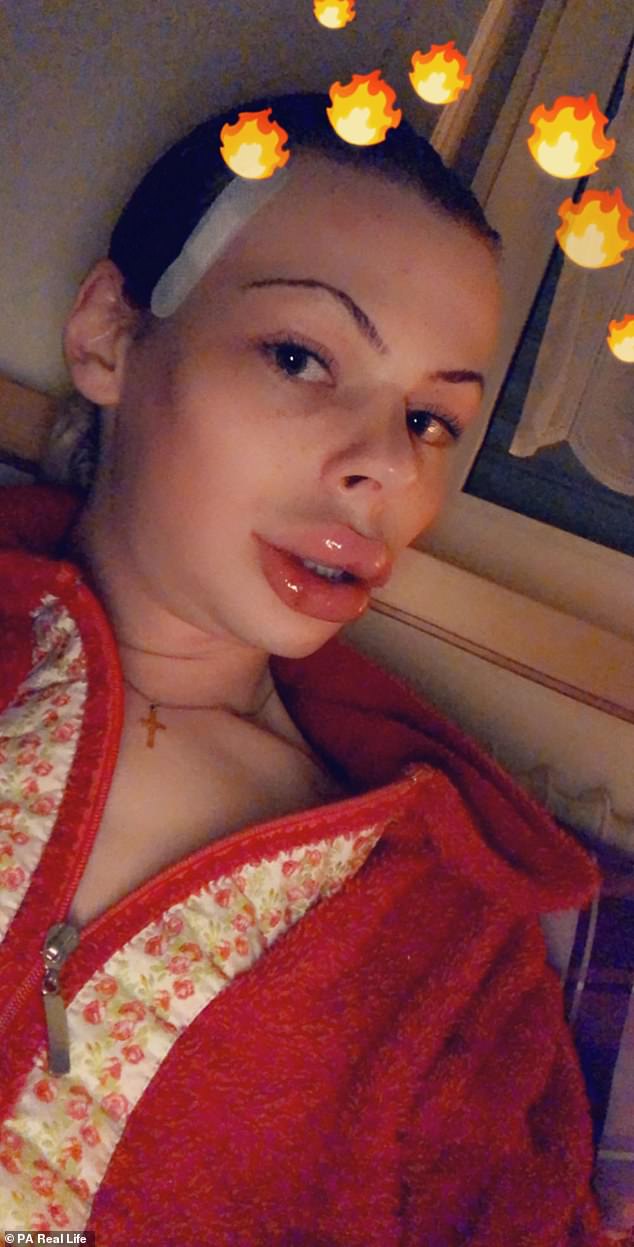 Patrick (pictured after surgery) hopes to meet an open-minded individual, as they believe some potential partners could struggle with the attention they receive