Girls Aloud singer Sarah Harding died on Sunday morning, less than a year after revealing that she had been diagnosed with breast cancer. She was 39. 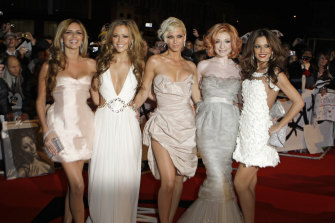 “It’s with deep heartbreak that today I’m sharing the news that my beautiful daughter Sarah has sadly passed away,” her mother, Marie Hardman, wrote on Instagram. “Many of you will know of Sarah’s battle with cancer and that she fought so strongly from her diagnosis until her last day.

“She slipped away peacefully this morning. I’d like to thank everyone for their kind support over the past year. It meant the world to Sarah and it gave her great strength and comfort to know she was loved.

“I know she won’t want to be remembered for her fight against this terrible disease – she was a bright shining star and I hope that’s how she can be remembered instead.”

The British singer rose to prominence in 2002 when she won Popstars: The Rivals, an ITV reality show. She then joined Girls Aloud alongside Cheryl Tweedy (later Cole), Nicola Roberts, Nadine Coyle and Kimberley Walsh.

Together, the group recorded 20 consecutive top UK top 10 singles including Sound of the Underground, No Good Advice, Love Machine, Jump and The Promise.

“I can’t think of words that could possibly express how I feel about this girl and what she means to me. I know so many of you will be feeling this way,” she wrote on Instagram.

Harding also released solo music, including a single in March, Wear It Like a Crown, that hit No.1 on the iTunes chart. All proceeds were donated to the Christie NHS Foundation, where she had been treated.

She won the UK version of Celebrity Big Brother in 2017 and made several guest appearances on Coronation Street in 2015.

Harding announced her diagnosis in August 2020, shortly before releasing her memoir, Hear Me Out, in March. She first got tested after finding a lump in her breast that she initially assumed was from her guitar strap.

After weeks in the ICU, she underwent a mastectomy.

“I can’t look at myself in the mirror anymore. I can’t face it,” she wrote in her book.

“On top of everything else, I just don’t look like me anymore. I don’t recognise myself. It’s very hard to wake up every morning knowing that a part of me is missing; that part of my womanhood is gone. The loss of it breaks my heart.”

Our Breaking News Alert will notify you of significant breaking news when it happens. Get it here.